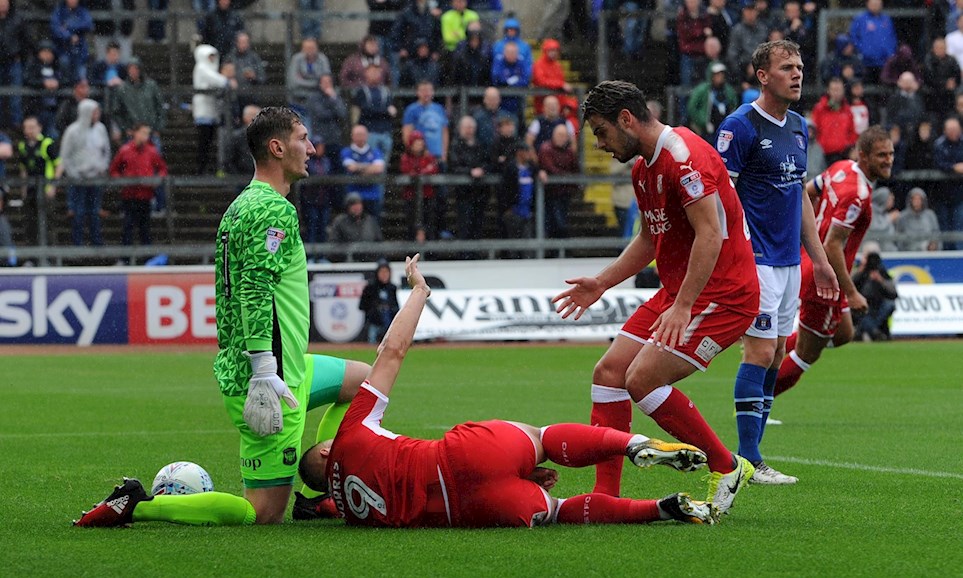 
Town Boss Dave Flitcroft has provided an update on the fitness of both Luke Norris and Donal McDermott ahead of tonight’s trip to Norwich City in the First Round of the Carabao Cup (7.45pm Kick-Off)....

Swindon Town bowed out of the Carabao Cup this evening, despite producing a brave and gutsy display in a 3-2 defeat to Championship outfit Norwich City at Carrow Road.

Olly Lancashire gave his side the lead but the Canaries showed their Championship class and were able to take a commanding lead in at the break.

Swindon produced a heroic effort in the second-half though and pushed their hosts all the way with Paul Mullin setting up a grandstand finish.

Town more than held their own for large parts of the first-half and Harry Smith came close to breaking the deadlock with his shot cleared off the line.

Norwich were flexing their attacking muscles on numerous occasions but it was the Reds who got their noses in-front first thanks to Lancashire’s bullet header. 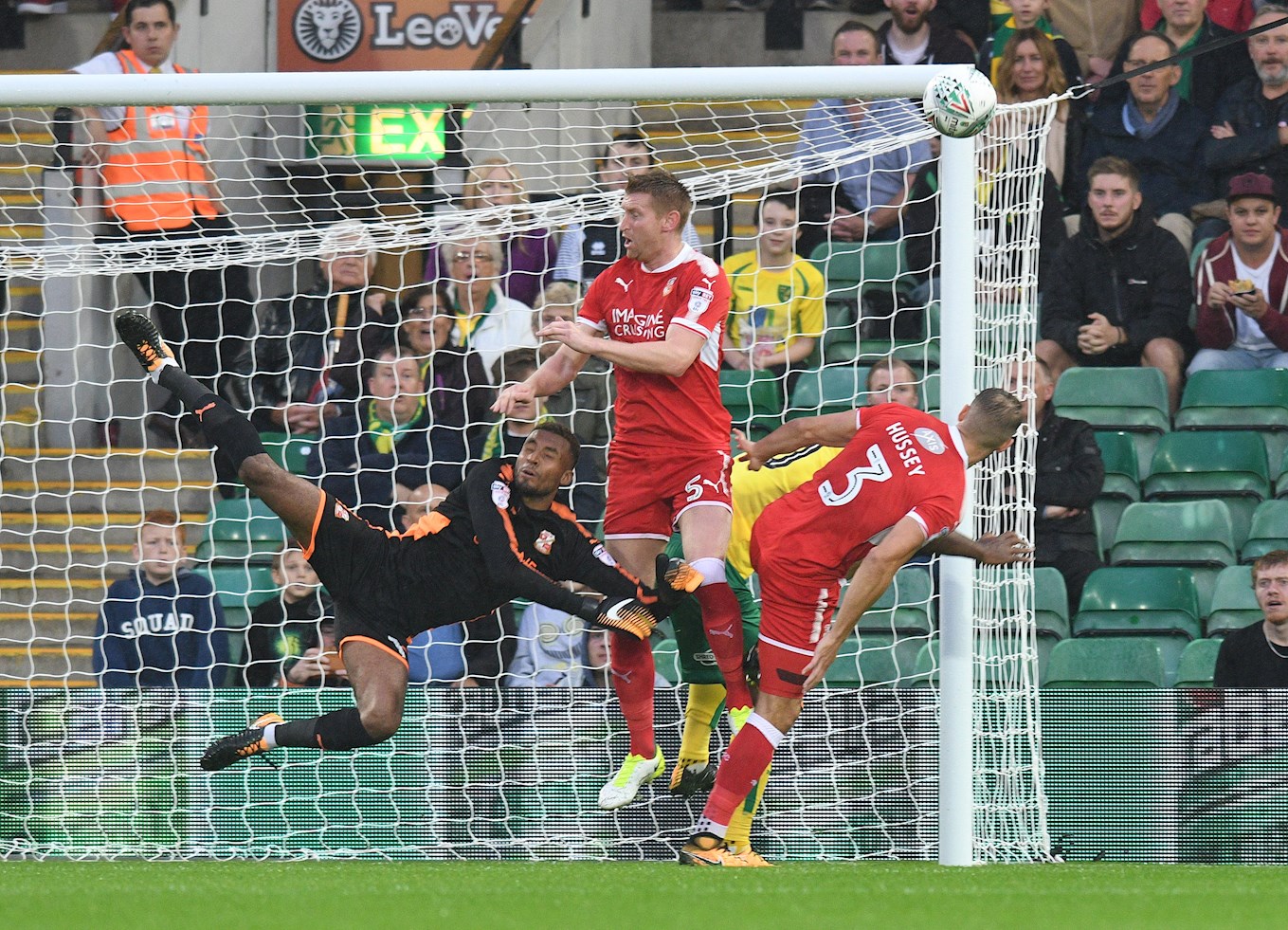 City wasted little time in responding to going a goal down though and they restored parity through Cameron Jerome, before finishing the half with a flurry thanks to efforts from Wes Hoolahan and James Maddison.

The Reds never gave up hope though and they reduced the deficit midway through the second-half after Mullin rose highest to convert from another Chris Hussey set-piece.

It was all the visitors in the latter stages of the game but, despite their very best efforts, it was Norwich who prolonged their stay in the competition.

Having suffered a few knocks and niggles over the weekend, Town Boss Dave Flitcroft opted to make four changes.

Chris Robertson replaced Dion Conroy at the heart of the defence to make his competitive debut for the club, while Conor Thomas and Tom Smith came into the midfield with Amine Linganzi and John Goddard dropping out.

Harry Smith replaced the injured Luke Norris as he was chosen to lead the line in a 4-3-3 formation, with Paul Mullin and James Brophy either side of him.

Due to being light on numbers, there were only four substitutes on the bench with Will Henry, Ellis Iandolo, Jordan Young and Scott Twine the options available to Flitcroft. 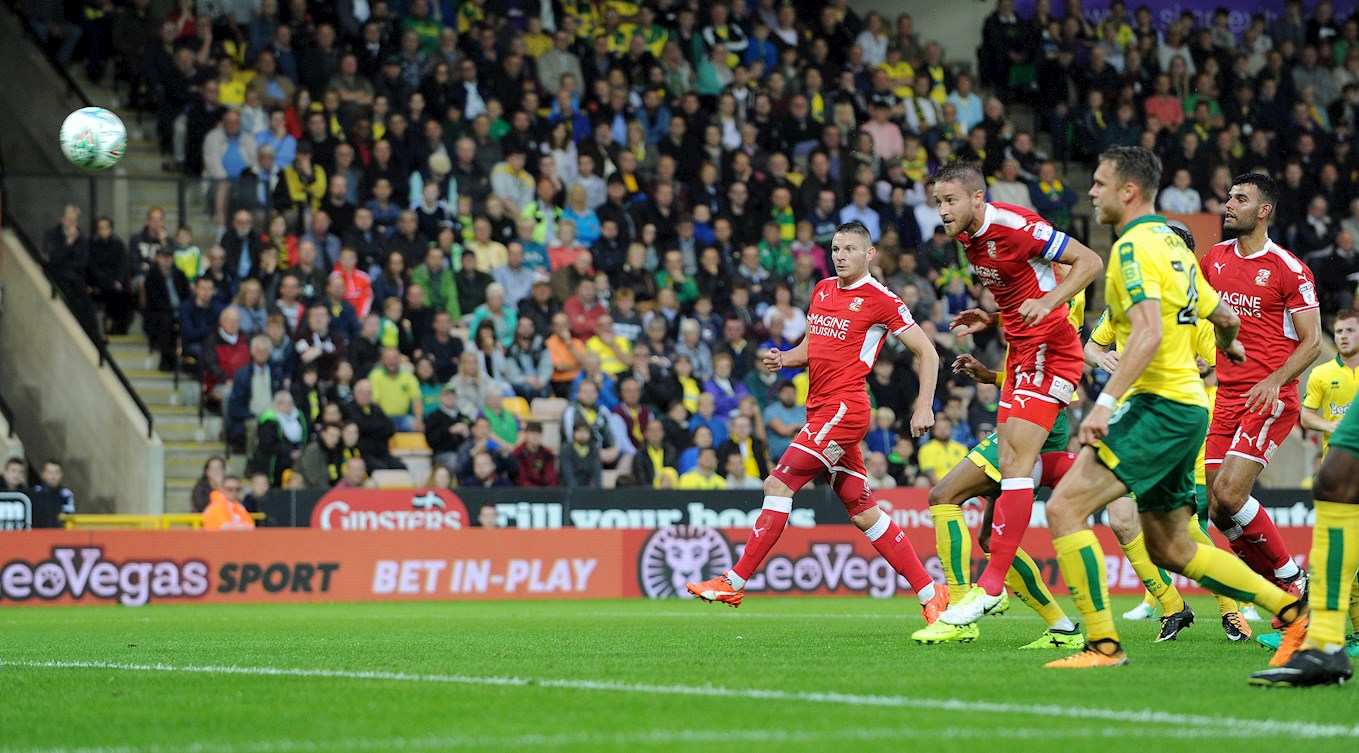 Norwich, who were held to a 1-1 draw by Fulham in their Sky Bet Championship opener at the weekend, decided to field a very strong Starting XI with the likes of Christoph Zimmermann, Wes Hoolahan and Cameron Jerome starting.

It was Town who had the first sight at goal though thanks to some brilliant work by Harry Smith to win back possession, which allowed James Brophy an early opportunity but his shot was straight at Angus Gunn.

That seemed to wake the hosts up who went on to enjoy a spell of pressure, with a lot of their attacking threat coming down the left-hand side.

Lawrence Vigouroux had to be alert to claw away a deflected cross, before James Maddison lashed over from the edge of the area.

Town were being forced to do their fair share of defending early on but they were inches away from drawing first blood with just ten minutes on the clock.

Harry Smith, operating as a lone frontman, pounced on a loose pass by the Norwich defence and he was able to burst clean through on goal but, despite beating the keeper, his effort was hacked off the line by Maddison.

Chances were beginning to become more frequent at either end as the two sides looked to strike first.

Mullin did well to get across his marker to latch onto Brophy’s cross and test Gunn with a header, before Jerome was denied by the legs of Vigouroux at the other end.

Josh Murphy then saw two firm drives deflected wide as City looked to have momentum on their side, although the opening goal of the game went the way of the visitors. 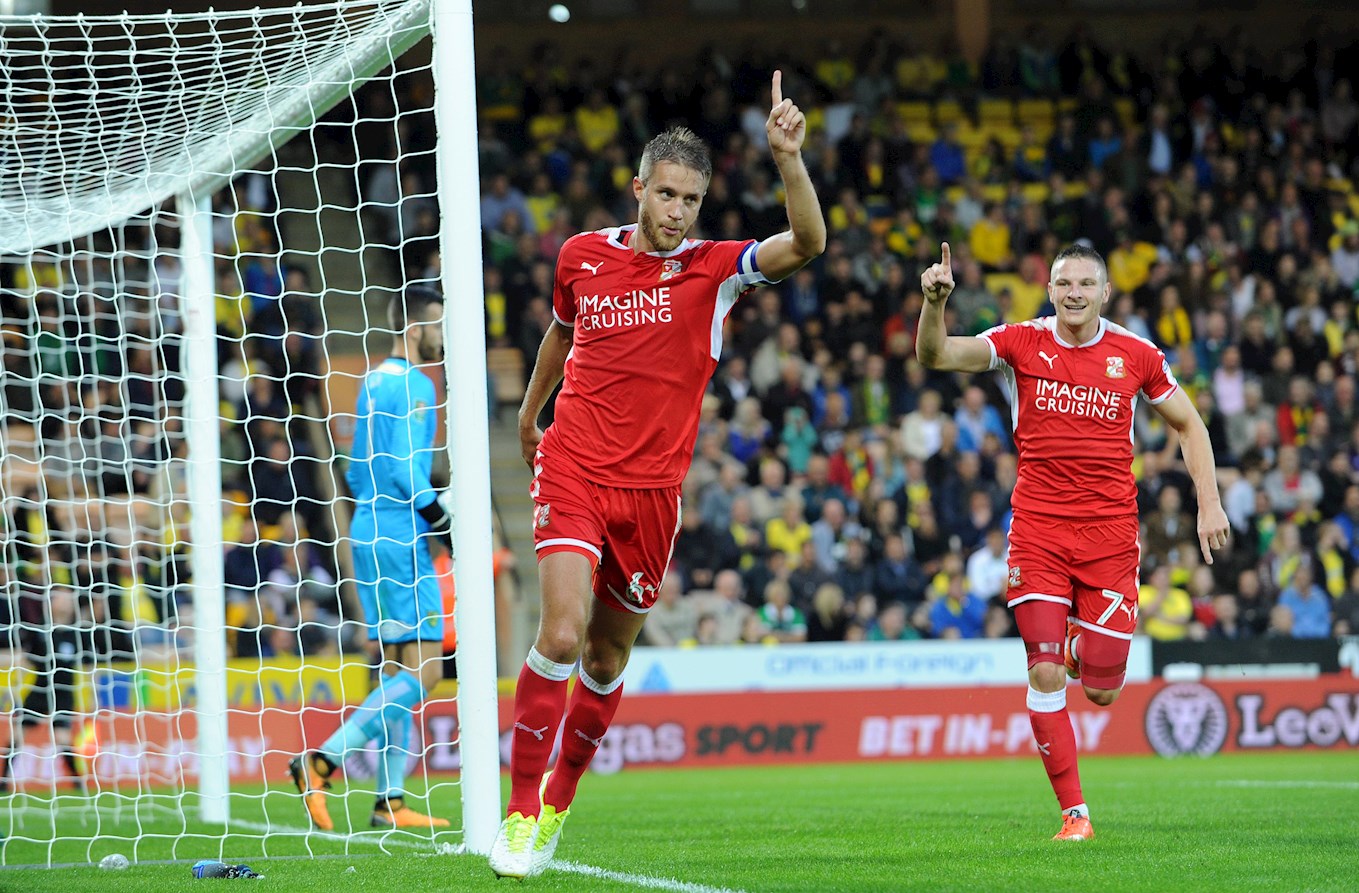 After Brophy was brought down, Hussey was given the chance to produce one of his trademark deliveries and that he did, finding the head of Lancashire who powered home his first goal for the club.

However, that joy proved to be short-lived as the Canaries hit back straight away thanks to Jerome, who latched onto Maddison’s precise pass before slotting home past Vigouroux.

Town then had to ride out a storm as their hosts continued to pour forward with Jerome warming the palms of Vigouroux, before Murphy lashed wide.

Norwich’s pressure eventually told though and they took the lead just shy of the 40-minute mark after Hoolahan weaved his way into the penalty area, playing a neat one-two with Maddison before tucking home.

And Maddison, not content with two assists, decided to get in on the act just before half-time, twisting and turning inside the area before slotting his shot into the bottom corner.

The former Coventry City man was running the show and he came close to notching his second on the stroke of half-time, but Vigouroux produced a superb save to keep Town in with a fighting chance heading into the second-half.

Looking to get back into the game, Town made a change shortly after the interval with Ellis Iandolo replacing Tom Smith.

It worked too with the Reds much improved and they were able to carve out a couple of opportunities with Mullin off-target under pressure, before James Dunne skewed a shot wide.

But Town’s endeavour soon paid off and they were able to give themselves a glimmer of hope just past the hour mark.

Similar to the opener, Hussey was able to work his magic from a free-kick and he picked out Mullin who glanced home his second goal in as many games.

There was still all to play for as the game entered its closing stages and both teams were going in search of another goal.

Mario Vrancic could only scuff a shot wide following good work from Murphy, before the midfielder curled over from a free-kick just outside the area. 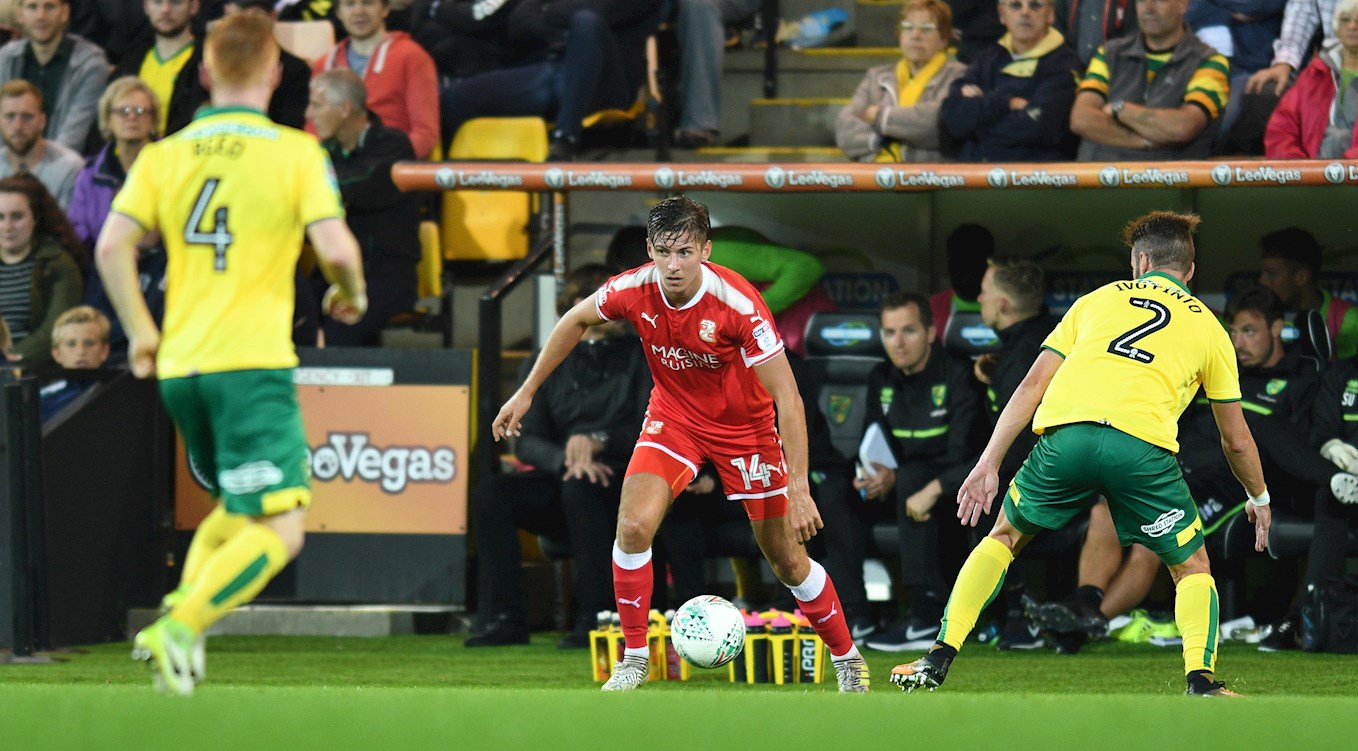 Despite having several tired legs out in the thick of battle, Town were giving it their absolute all in the closing stages in a desperate bid to grab an equaliser.

Hussey was causing all sorts of mayhem once again and his cross was knocked down by Smith into the path of Mullin, who forced Gunn into a superb stop.

The Norwich keeper was at it again moments later as he denied both Dunne and Iandolo in quick succession, while Vrancic saw a shot deflected wide at the other end.

Town were on the front-foot heading into the dying seconds and they mustered up one more chance, although Lancashire’s header was straight into the chest of Gunn with the Canaries heading through to the next round.


Town Boss Dave Flitcroft has provided an update on the fitness of both Luke Norris and Donal McDermott ahead of tonight’s trip to Norwich City in the First Round of the Carabao Cup (7.45pm Kick-Off)....

Tickets are now on sale for our trip to Norwich City in the First Round of the Carabao Cup next month.

The game will provide a new-look Town squad with an early opportunity to test themselves against Championship opposition, with the fixture coming just days after the opening day trip to Carlisle United.

Tickets for this match are allocated seating.

PLEASE NOTE - Advance ticket sales will stop at 5pm on Monday 7th August. After this point tickets must be purchased on the day at Carrow Road. 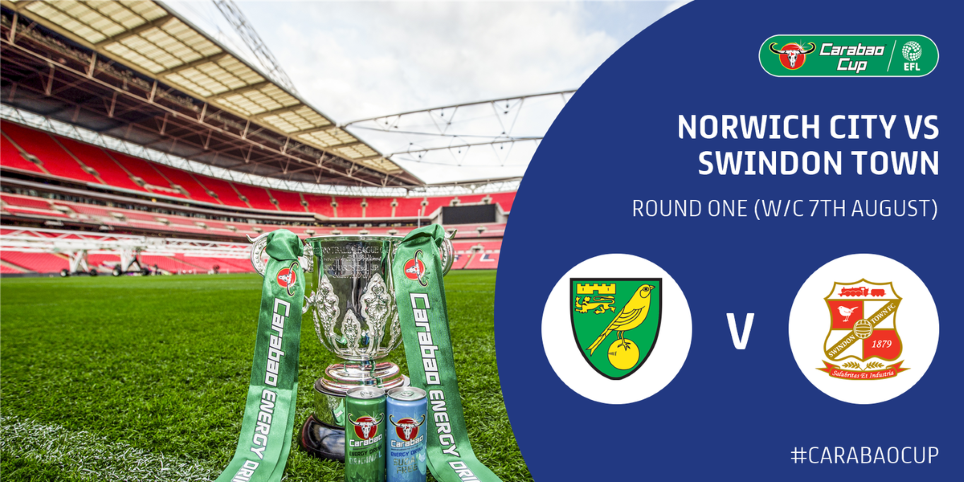 
Swindon Town can confirm that our Carabao Cup First Round clash away at Norwich City will take place on Tuesday 8th August.