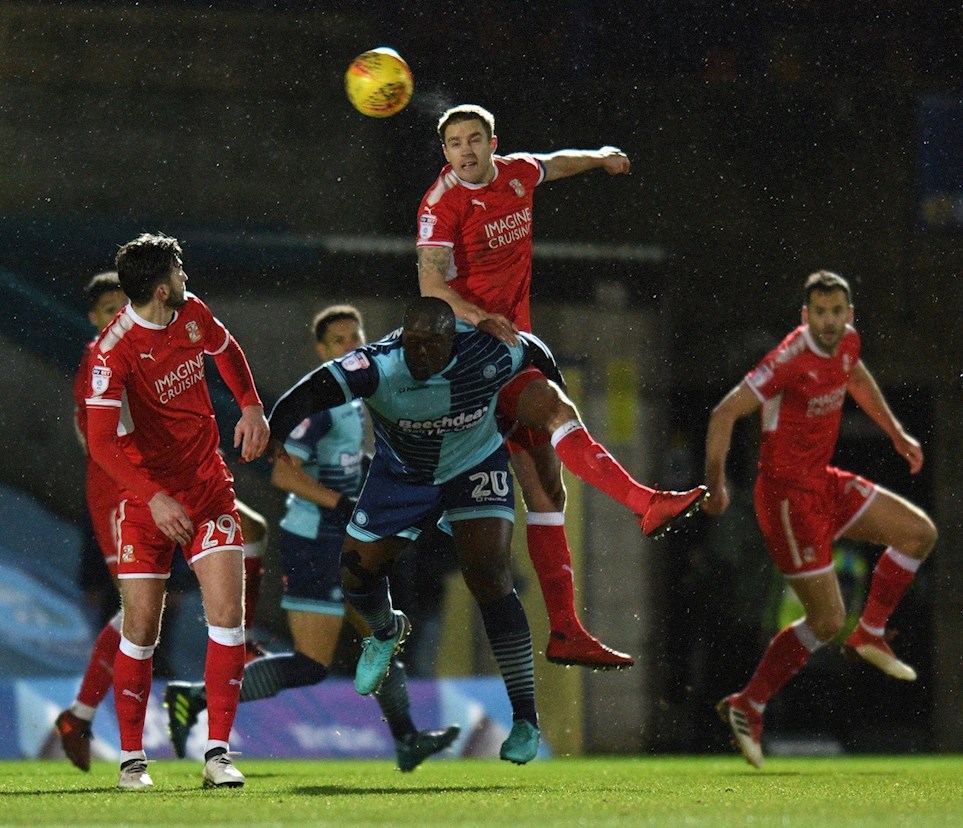 Lancashire - We Have To Dust Ourselves Down


Olly Lancashire has admitted that he and his team-mates have to pick themselves up quickly from the heartbreaking 3-2 defeat to Wycombe Wanderers on Tuesday night. 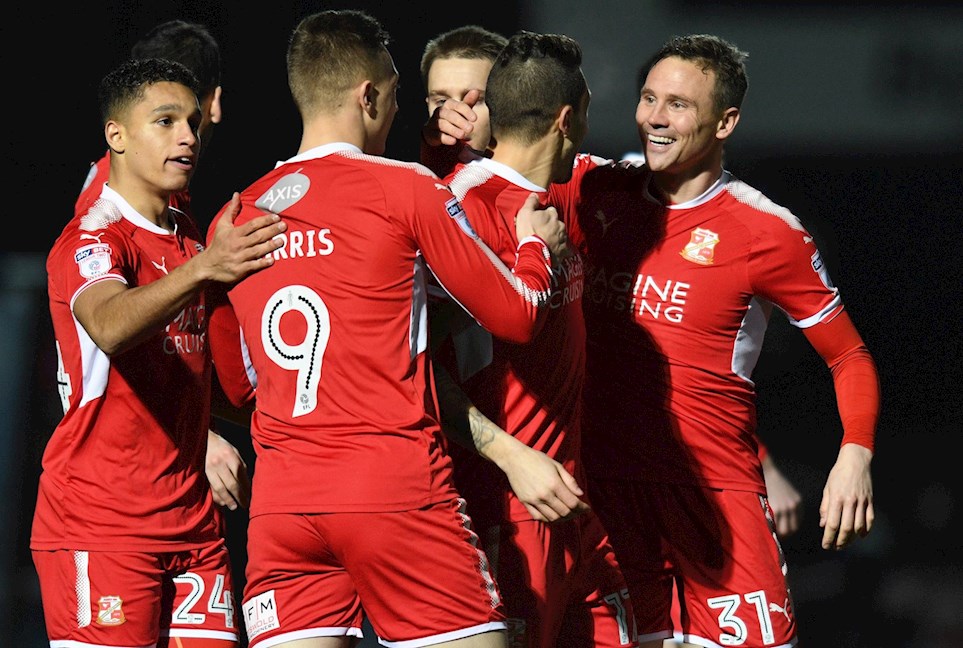 
Swindon Town were on the end of a 3-2 defeat to Wycombe Wanderers at Adams Park on Tuesday evening. 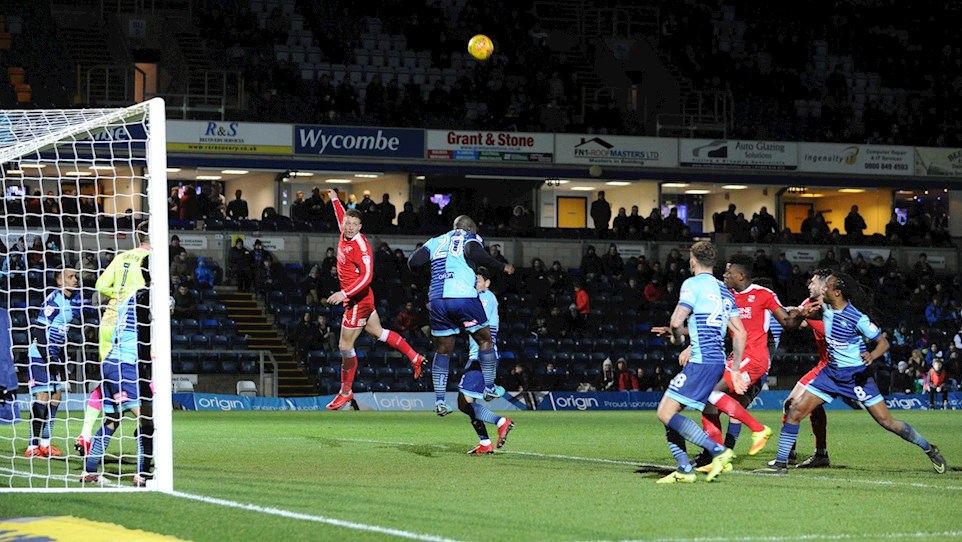 
Swindon Town were unable to hang onto a point on Tuesday evening after suffering a 3-2 defeat to Wycombe Wanderers at Adams Park. 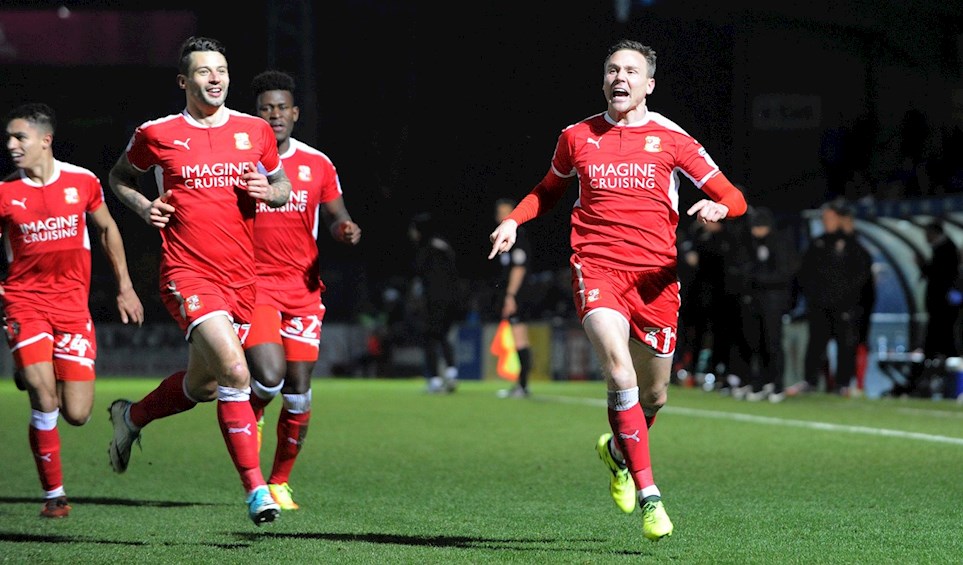 
Swindon Town were undone by a last-minute goal in their 3-2 defeat to Wycombe Wanderers on Tuesday night.

Swindon Town were undone by a last-minute winner on their way to suffering a 3-2 defeat to Wycombe Wanderers at Adams Park this evening.

Entertainment was in large supply from the very off as Marc Richards prodded home inside the opening two-minutes to give the Reds a brilliant start.

But that joy was short-lived as The Chairboys hit back emphatically, drawing level through Luke O'Nien before Craig Mackail-Smith added a second.

Yet another outstanding free-kick from Matty Taylor restored parity in the second-half, but Adebayo Akinfenwa struck in the dying minutes to clinch the spoils for the home side.

There was only the one change for Town from the side that defeated Mansfield at the weekend with Olly Lancashire returning from injury to replace Matt Preston at the heart of the defence.

Both sides entered this contest in very good form and, yet again, a big three points was at stake with the battle for promotion places hotting up.

It was a dream start for Dave Flitcroft's side too as Scott Brown could only parry a cross into the path of Marc Richards, who made no mistake from a couple of yards out.

However, the visiting fans were still in full voice when Wycombe hit straight back, Luke O'Nien latching onto a loose ball before sending a blistering shot into the back of the net. 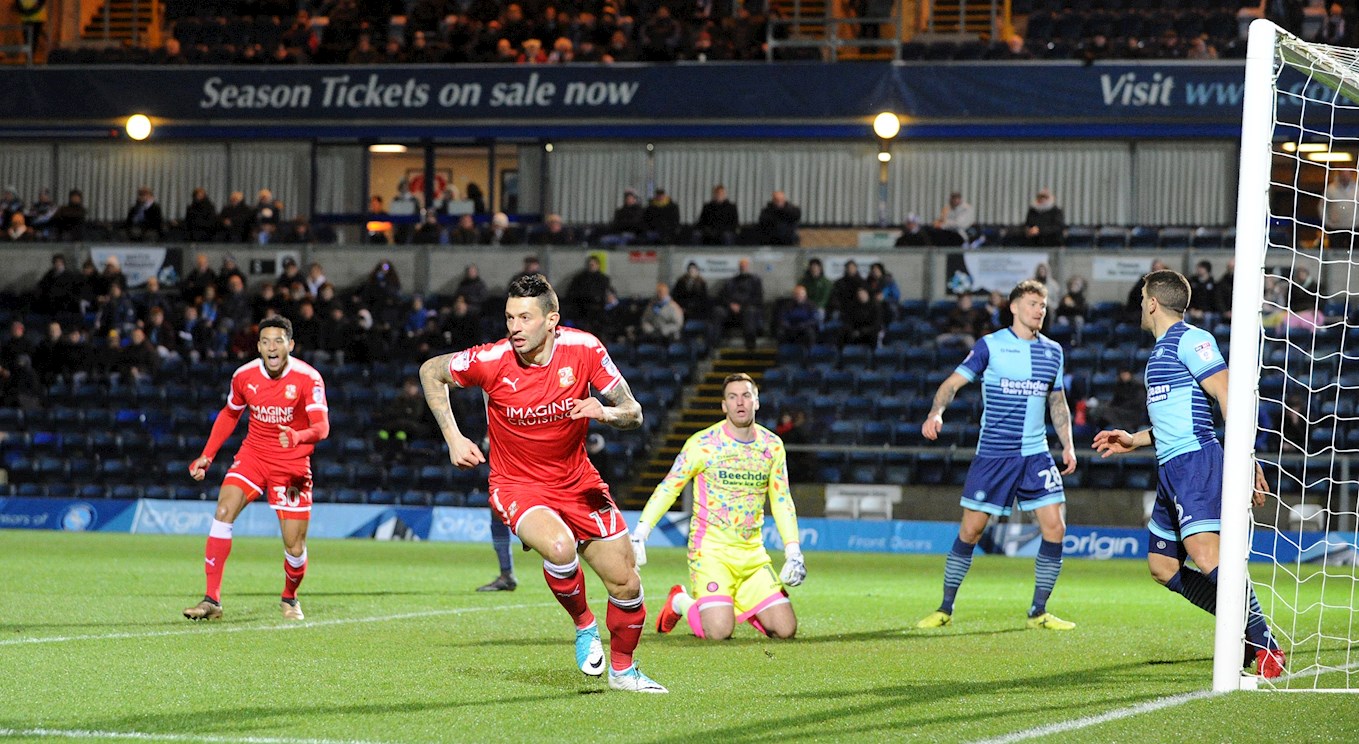 There was a breakneck tempo to proceedings and the game showed no signs of slowing down as Reice Charles-Cook claimed a tame header from Dan Scarr.

But the Town stopper was unable to prevent Wanderers from taking the lead with just ten minutes on the clock.

The hosts surged forward through Paris Cowan-Hall who, under pressure from Charles-Cook, squared the ball to Craig Mackail-Smith who had a tap-in.

Town had to compose themselves again following that bonkers opening and they did come close to restoring parity, but Luke Norris could only flick wide from a Richards' cross.

Both sides were able to win a succession of corners but neither could really make them count with Scarr heading wide, whilst Timi Elsnik could only scoop a shot way over at the other end.

The chances kept on coming as Mackail-Smith fired a shot down the throat of Charles-Cook from a tight angle, and the striker was once again denied by the keeper towards the end of the first-half. 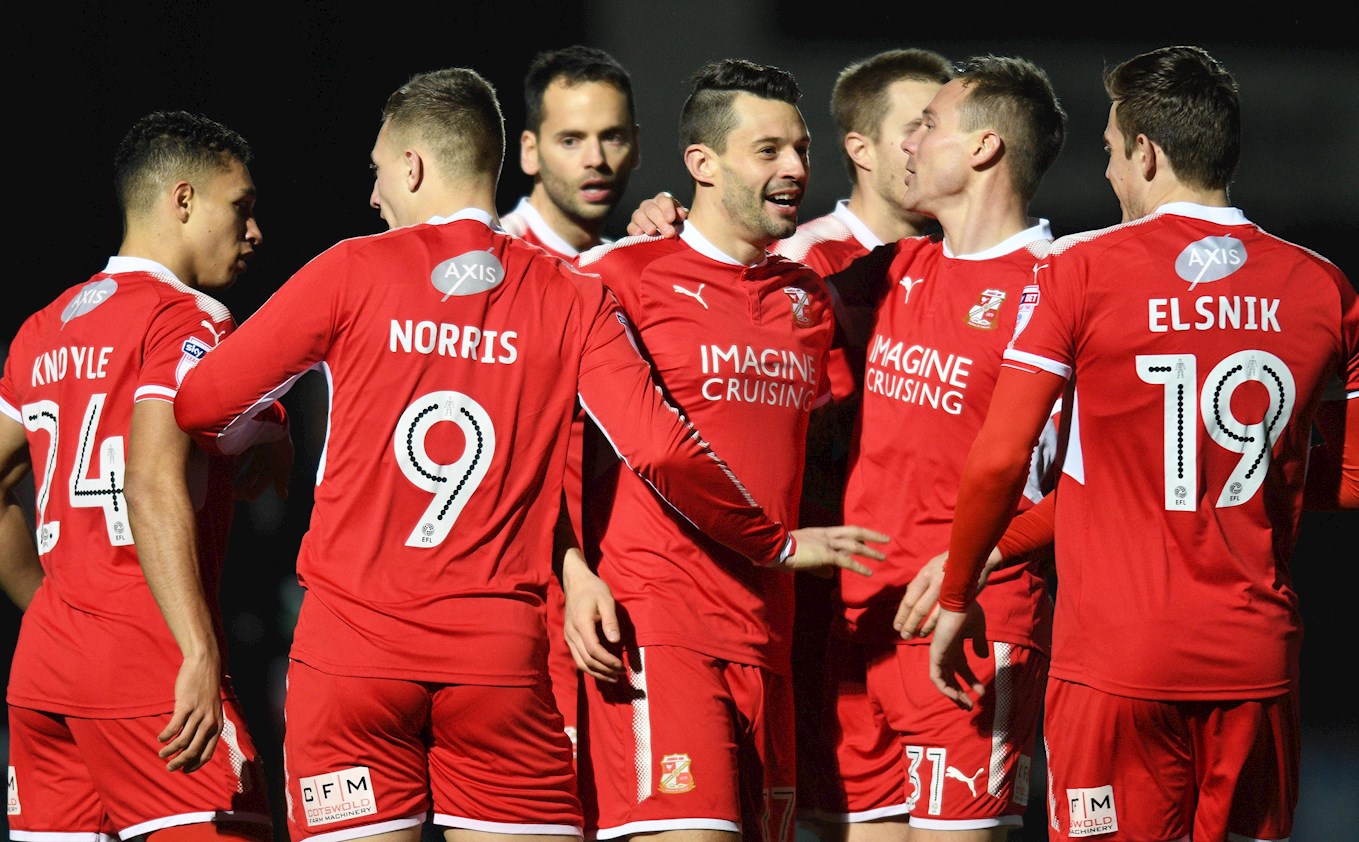 Adebayo Akinfenwa also saw his header saved before Town had a glorious opportunity to draw level at the other end as Keshi Anderson latched onto a long punt, but the attacker could only flash a shot inches past the post.

Anderson had another chance moments later but he was unable to get his strike on target, before Norris took advantage of some slack defending to get a shot away, although his effort was smothered by Brown.

There was so nearly an equaliser for Town straight after the break as Matty Taylor's wicked cross was pushed over the head of Richards by Brown.

Wycombe also had further opportunities too with Akinfenwa being denied by Charles-Cook, before the big striker sent a header wide from a long punt downfield moments later.

Town then made their first change of the game as Kaiyne Woolery replaced Anderson to inject some fresh legs into the attack.

It nearly had an instant impact too as the Reds were able to get forward quickly and create an opening, but Norris could only send a diving header wide.

Akinfenwa was also guilty of being wasteful at the other end as he could only power a header over the bar from Cowan-Hall's cross, and that missed opportunity came back to haunt the hosts.

Town were awarded a free-kick over 30-yards out but it proved no problem for Taylor who thumped home a stunning effort.

Swindon were well on top and they were creating opportunities for fun with Norris glancing a header wide from a corner.

And the Reds came even closer to restoring their lead with twenty-minutes left as Woolery latched onto a long ball before lofting an effort inches over the bar. 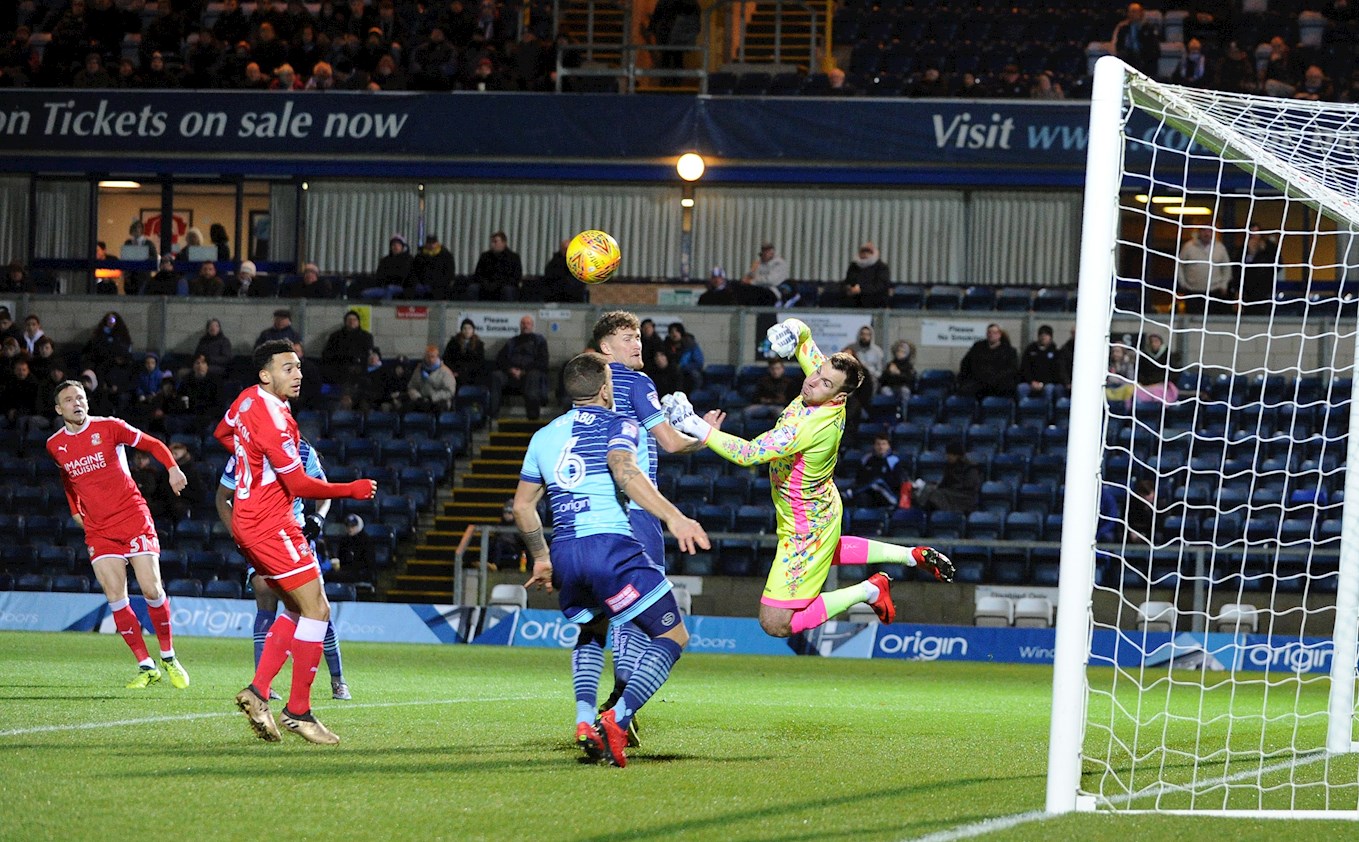 Akinfenwa finally hit the back of the net with a diving header but the goal was ruled out due to an apparent foul.

It was all Wycombe in the closing stages and they were creating plenty of pressure via a succession of corners.

But Wycombe's pressure eventually paid off as Town failed to clear their lines from a corner, which allowed Gape to whip a cross in and Akinfenwa's header looped over Charles-Cook and into the back of the net to inflict a heartbreaking loss on Swindon.

Lancashire - We Have To Dust Ourselves Down


Olly Lancashire has admitted that he and his team-mates have to pick themselves up quickly from the heartbreaking 3-2 defeat to Wycombe Wanderers on Tuesday night.


Swindon Town were on the end of a 3-2 defeat to Wycombe Wanderers at Adams Park on Tuesday evening.


Swindon Town were unable to hang onto a point on Tuesday evening after suffering a 3-2 defeat to Wycombe Wanderers at Adams Park.


Swindon Town were undone by a last-minute goal in their 3-2 defeat to Wycombe Wanderers on Tuesday night.

Swindon Town can confirm that tickets for our Sky Bet League Two fixture away at Wycombe Wanderers will go on general sale tomorrow morning.

Town have been allocated 1,800 unreserved seated tickets for this fixture.

For wheelchair tickets please contact the Wycombe Ticket Office on 01494 441118.

Should tickets still be available, then advance ticket sales at Swindon will stop at 12pm on Monday 12th February 2018.

If tickets remain they will be available on the day but with an increase of £2.

PLEASE NOTE - TICKETS FOR THIS GAME GO ON SALE FROM 9AM ON TUESDAY 30TH JANUARY.