Swindon Town are back in Sky Bet League Two action on Saturday when they take on Coventry City at the Ricoh Arena (3pm Kick-Off).

The Reds are currently on a three-game winning streak and they will be looking to make it four victories in a row tomorrow.

Coventry are currently just one spot above Town in the table and they will be looking to bounce back after losing to Exeter last time out. 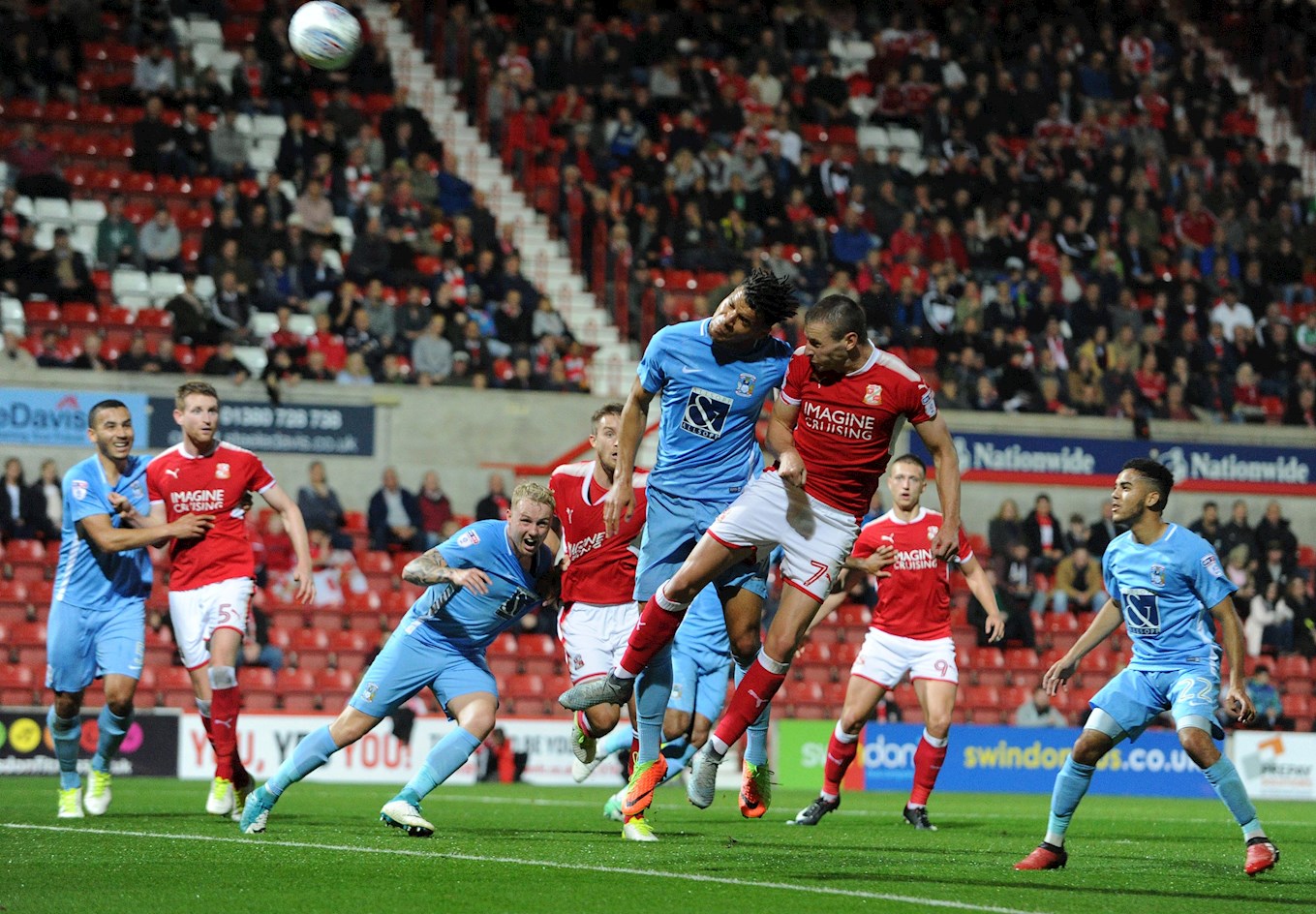 A Luke Norris wonder goal wasn't enough for Swindon to avoid defeat in September 2017 with efforts from Michael Doyle and Duckens Nazon sealing the three points for City.

Tickets will be available on the day for Town fans with a price increase of £3.

Marc McNulty has scored nine goals in League Two so far this season and, although he's not been as consistent as he would have liked this term, his eye for goal will make him a tricky customer to deal with for Town tomorrow. 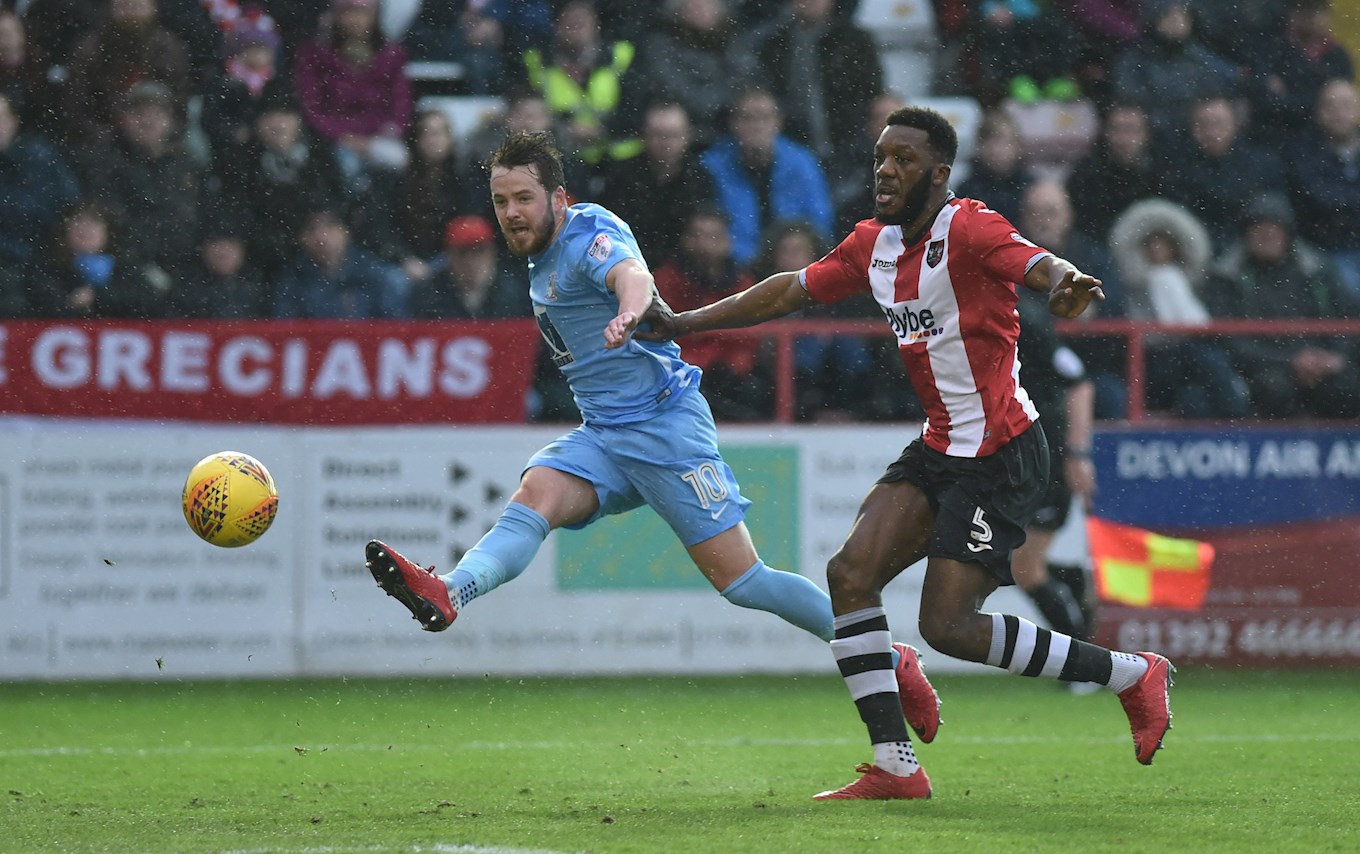 COVENTRY CITY could welcome Peter Vincenti back into the fold after the midfielder returned to training following a spell out with a knee injury.

However, they will be without Liam Kelly, Jodi Jones and Tony Andreu who all remain on the treatment table.

SWINDON TOWN could hand a debut to new striker Marc Richards, who joined on a free transfer from Northampton at the start of the week.

Chris Hussey and Timi Elsnik are both nearing a return to training while Amine Linganzi is expected to be out for a few weeks. 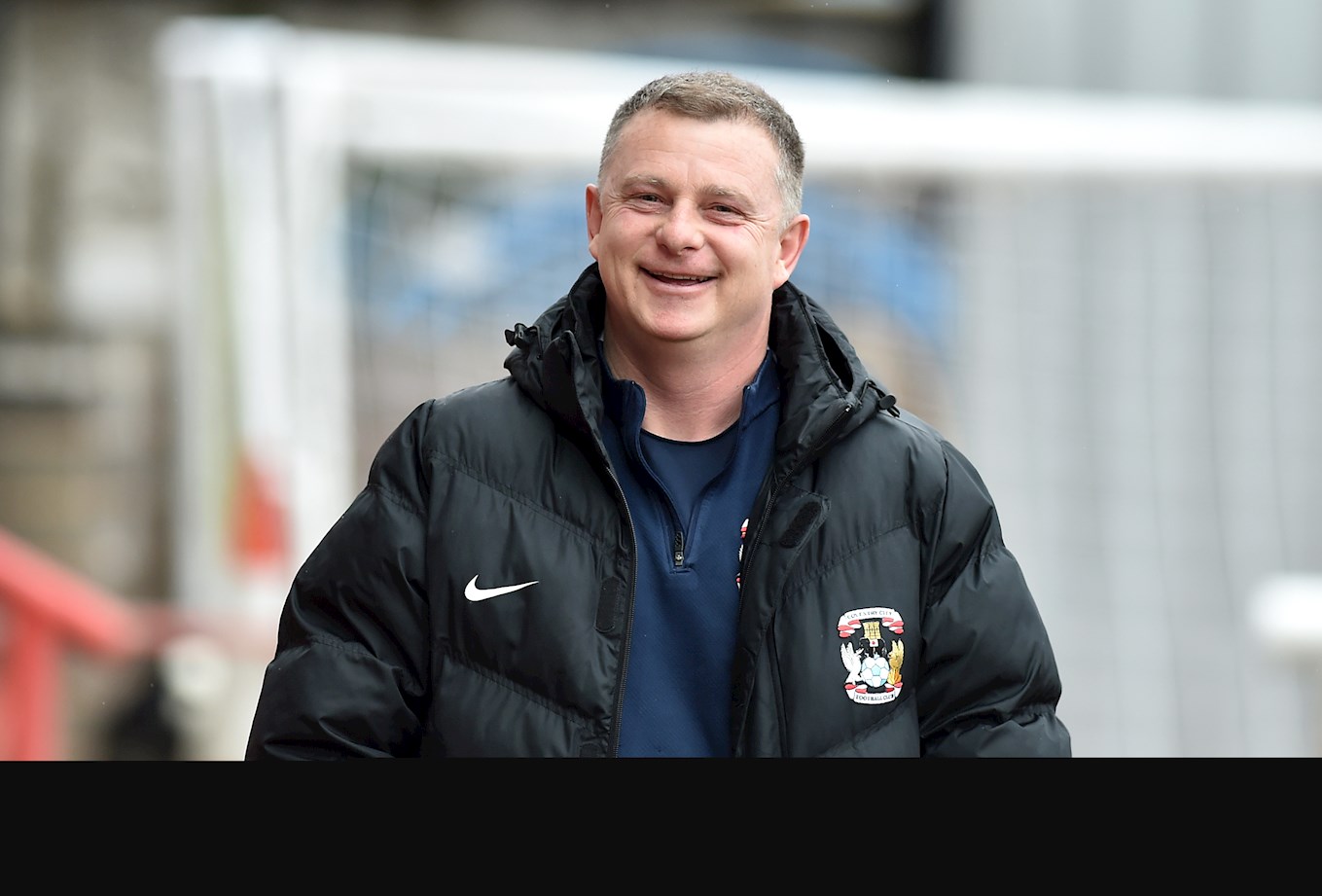 Mark Robins, Coventry City Manager: "It is a big game and we are looking forward to it.

"They are a good team and they have some real good players. They are on form at the moment and their away form is better than anybody in the league.

"We want to play in an attacking sense and cause them real problems. We did not do enough last time out and we want to try and put that right this time out.

"Swindon have brought in a few players and have spent well over January. There may be about eight or nine million pounds worth of players in that side.

"They hold it up well and stretch the play well and Keshi Anderson is a massive threat for them." 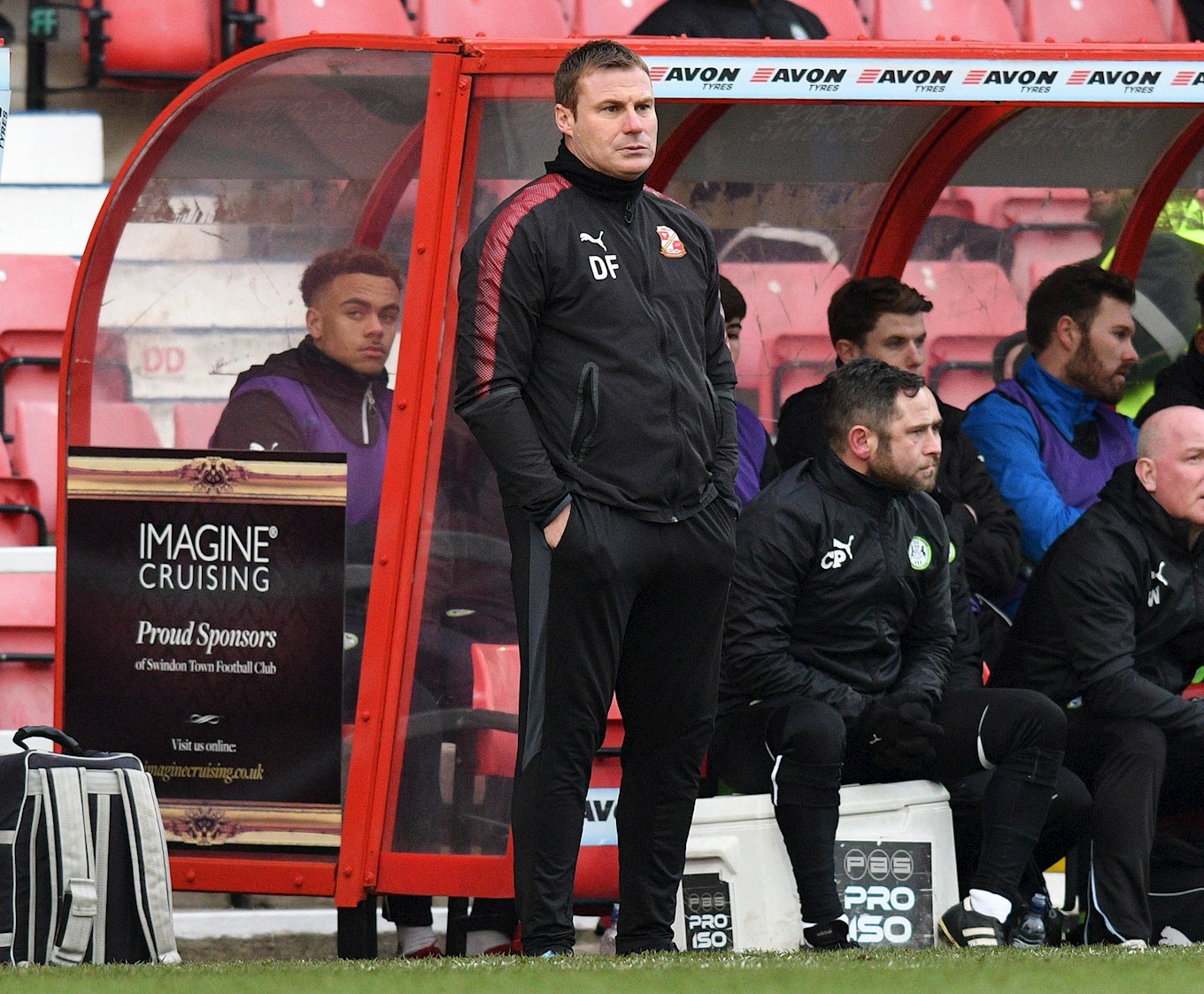 Dave Flitcroft, Swindon Town Manager:  "The league is churning out results everywhere - Chesterfield beat Luton - there's no givens in this league and you get tested differently almost every game. 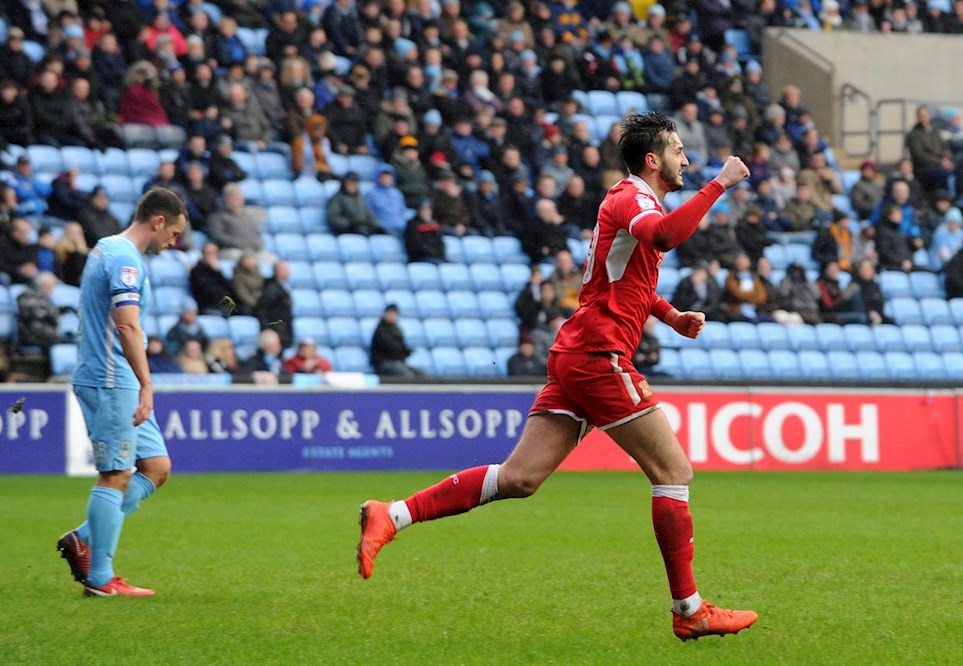 
Swindon Town's winning streak was snapped on Saturday after they suffered a 3-1 defeat away at Coventry City. 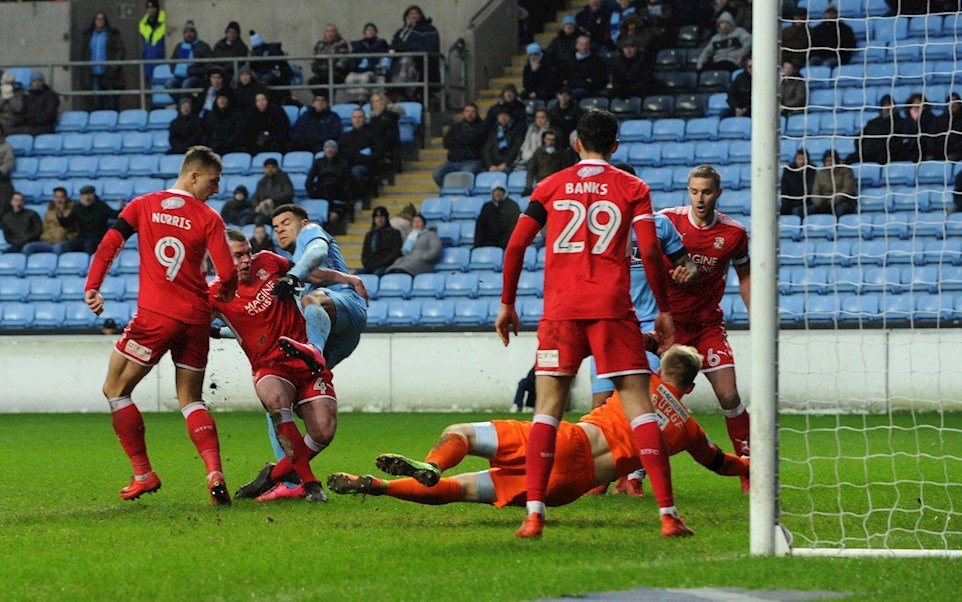 
It was a frustrating day at the office on Saturday for Swindon Town who suffered a 3-1 defeat away at Coventry City.


Swindon Town were put to the sword 3-1 by Coventry City on Saturday in an action-packed encounter at The Ricoh Arena.

Lancashire - Probably Our Most Frustrating Game Of The Season


Olly Lancashire couldn't hide his frustration in the wake of our 3-1 defeat to Coventry City earlier today.

Swindon Town were made to pay for not taking their chances after losing 3-1 to Coventry City at The Ricoh Arena this afternoon.

Despite a bright opening which saw them create a couple of chances, the Reds found themselves two goals down before the half-hour mark.

Maxime Biamou's stunning strike saw City quickly get their noses in-front, and they were able to extend their lead soon after thanks to Marc McNulty's well-taken spot-kick.

There was hope at the interval however after Ollie Banks was in the right place at the right time to reduce the deficit thanks to his first goal in Swindon colours.

Swindon were certainly doing everything they could to draw level in the second-half but, ultimately, they just came up short with McNulty's second goal of the day wrapping up the points for his side late on.

Town Boss Dave Flitcroft opted to make just the one change to the side that beat Forest Green Rovers a week before.

Kellan Gordon replaced Kyle Knoyle at right-back, with the latter dropping to the bench, as the Reds once again lined-up in a 3-5-2 formation with Luke Norris and Kaiyne Woolery leading the line at the top of the pitch.

New signing Marc Richards was handed a place amongst the subs, giving his side another dangerous option to call upon if needed. 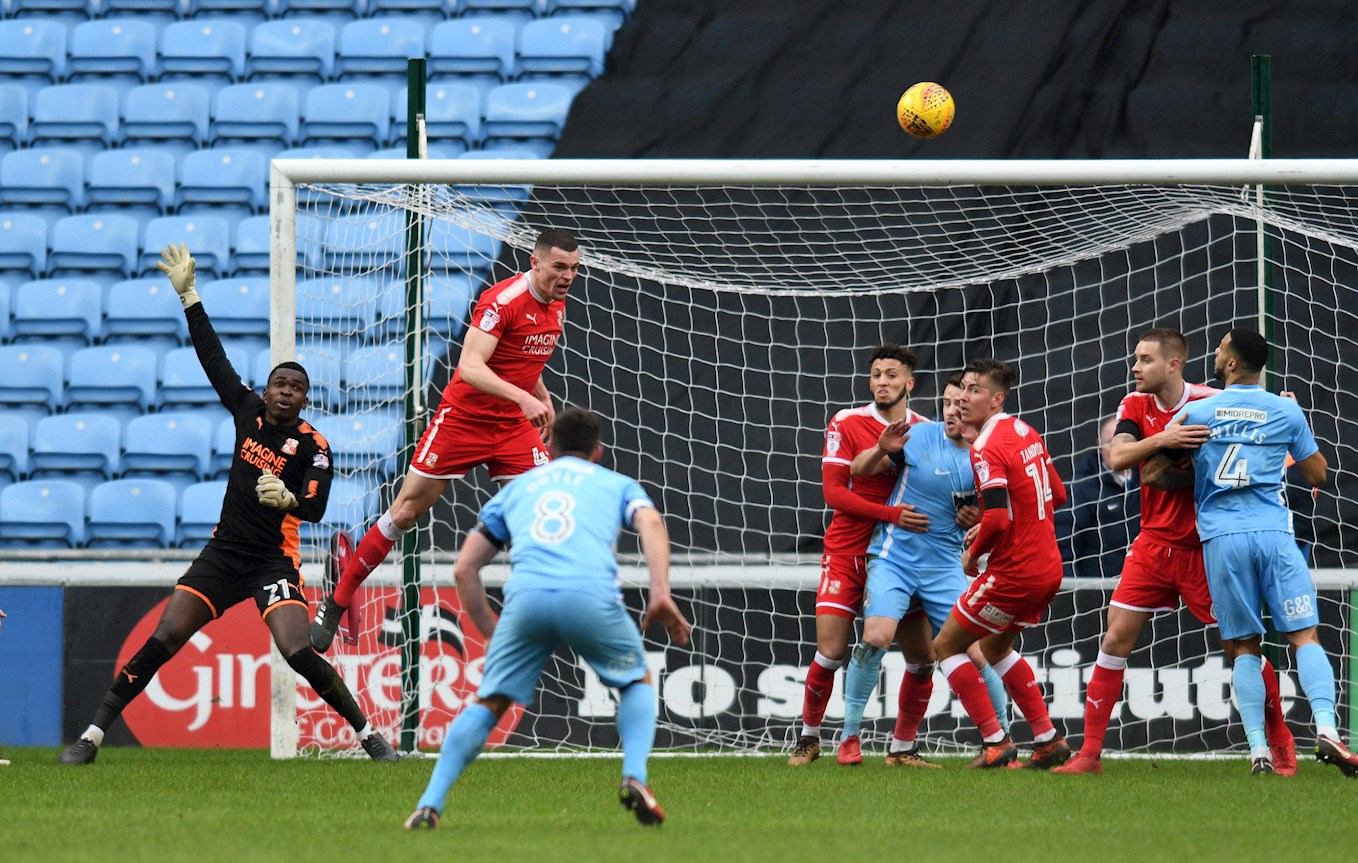 Both sides went into the game locked level on points in the table meaning there was plenty of importance riding on this fixture.

Town entered the contest in fine form having won three games on the bounce and they were looking to carry that on in a bid to boost their promotion hopes.

It was the hosts who threatened first though as Jordan Shipley saw his drive deflected behind, which led to a couple of corners for City.

That appeared to wake Town up, however, and it was soon their turn to put the pressure on with Keshi Anderson seeing his shot deflected behind for a corner following good work by James Dunne to start an attack.

Town were turning up the heat with a succession of corners as Olly Lancashire sent two efforts off-target, whilst Luke Norris also headed over and Lee Burge had to claw a Ollie Banks delivery behind.

Kaiyne Woolery then did well to run into space before holding off his man and getting a shot away, but his strike was deflected away from danger.

And that led to an opener for The Sky Blues as a long punt downfield was only half-cleared by the Town defence into the path of Maxime Biamou, who set himself before smashing a superb half-volley into the top corner.

Coventry were on a high following that goal and they went close moments later with Jordan Maguire-Drew curling inches wide from 25-yards.

But the home side were able to double their advantage just a minute later after being awarded a penalty.

Marc McNulty was bundled over inside the area by Matt Preston and the striker was able to pick himself up and thump home from the spot to give Town a mountain to climb.

The tempo of the game slowed down somewhat towards the end of the first-half with the Reds doing their best to compose themselves once more.

They certainly did that and, almost out of nowhere, they came back fighting and were soon right back into the contest.

Anderson found Ellis Iandolo out wide and the youngster was able to produce a superb low cross which Banks tucked away perfectly.

It was all one-way traffic from that point on as Town looked to haul themselves level before the break.

They came close too with Burge having to tip a thunderous strike from Norris onto the crossbar, before Banks saw his drive deflected behind and Iandolo sent a tame header into the gloves of Burge.

Much of the early stages of the second-half was played in the middle of the pitch, although Preston did very well to get back and hook clear the danger after McNulty was played through by Biamou.

Town were chasing an equaliser and they came so, so close on a couple of occasions as they looked to really put their foot on the gas.

A header was sent onto the bar and the hosts were eventually able to clear following an almighty goalmouth scramble, before Norris saw his shot on the turn smothered by Burge.

Town opted to introduce a fresh pair of legs just past the hour mark and it was a debut for new signing Marc Richards, who replaced Luke Norris in attack.

It was soon time for another change too with Paul Mullin coming on for Kaiyne Woolery as the Reds continued their search for an equaliser. 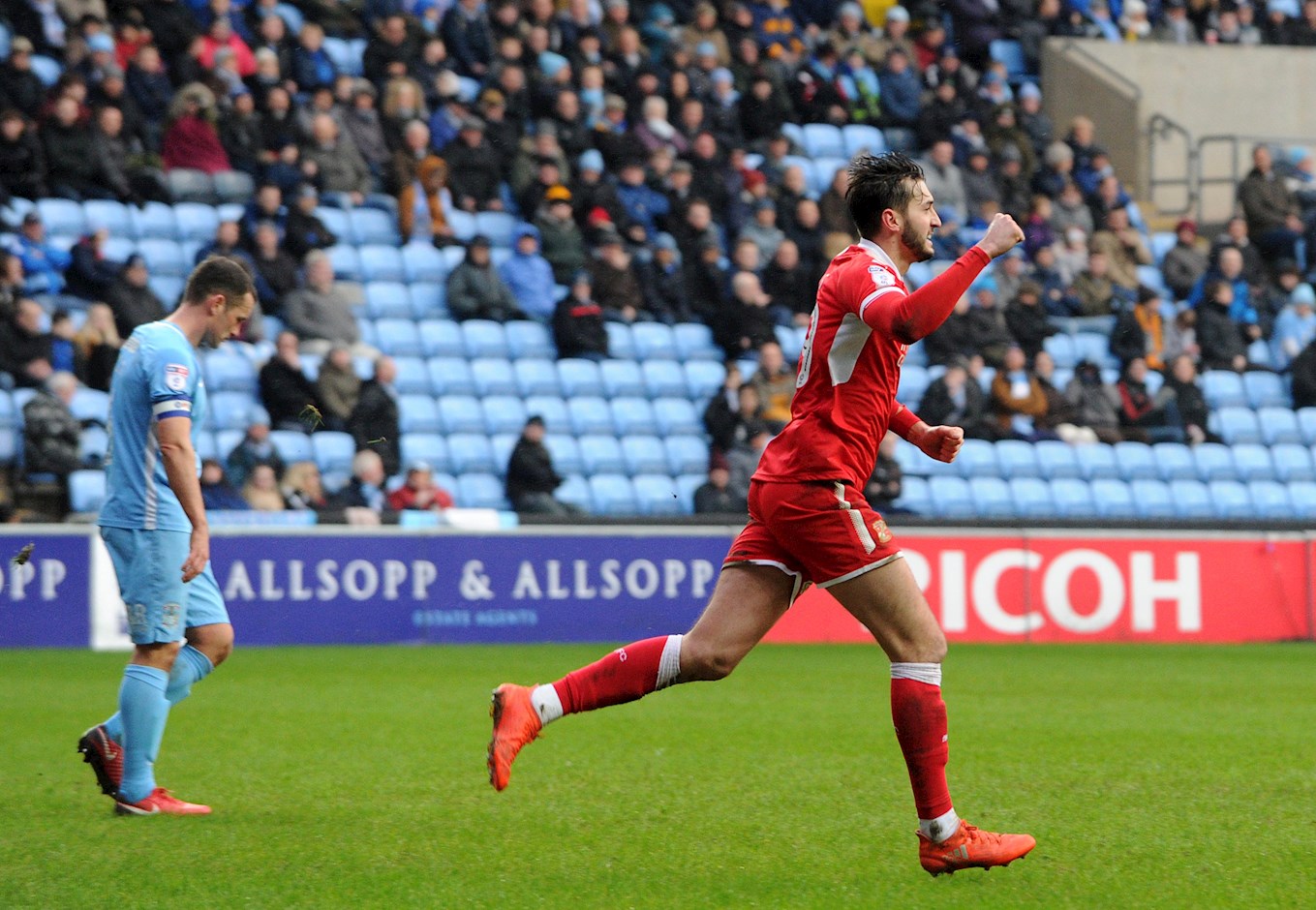 James Brophy replaced Kellan Gordan shortly after while Lancashire saw his header smothered by Burge as time continued to tick away.

But Town were dealt with a sucker-punch late on that was their own doing as Anderson lost possession inside a dangerous area, allowing McNulty to curl home his second goal of the afternoon.

And that strike ended any hopes of a fightback as Town suffered their first defeat in four games.


Swindon Town's winning streak was snapped on Saturday after they suffered a 3-1 defeat away at Coventry City.


It was a frustrating day at the office on Saturday for Swindon Town who suffered a 3-1 defeat away at Coventry City.


Swindon Town were put to the sword 3-1 by Coventry City on Saturday in an action-packed encounter at The Ricoh Arena.

Lancashire - Probably Our Most Frustrating Game Of The Season


Olly Lancashire couldn't hide his frustration in the wake of our 3-1 defeat to Coventry City earlier today.

Dave Flitcroft's side will head to The Ricoh Arena on Saturday 20th January 2018 - 3pm Kick-Off.

Town have initially been allocated 1,040 seats for this game.

PLEASE NOTE - TICKETS WILL BE ON SALE ON THE DAY WITH AN INCREASE OF £3.

Should tickets still be available, then advance sales at Swindon will stop at 12pm on Friday 19th January 2018.