The Reds are back at home today and they will be looking to return to winning ways following their defeat to Notts County in midweek.

"They've got a very aggressive front-two, very good movement and they will try to play out and play through the team," Flitcroft said.

"They will look to get the two boys in who just work incredibly hard to create opportunites.

"They keep a solidity as well and they've had a good start. They are getting led very well and we are aware of their strengths and we'll make sure that our strengths are right."

Flitcroft also revealed that there has been plenty of hard work put in on the training ground as Town look to get off the mark at home this afternoon.

"It is making sure that me as manager and as leader of the football club comes up with a solution for the home form.

"The players are desperate to win for the home fans.

"The two games we've lost at home we've gone chasing those games and have opened ourselves up.

"We're working towards a solution and we will find that solution a million percent and we are desperate to.

"We are working hard on it and it won't just happen overnight. I look to make changes over a period of time.

"Notts County was a fantastic place to go but it isn't anymore. They've halved the size of the changing room down to a corridor now and we had our meeting in the team shower.

"It isn't a great place for an away team to go and it has given me food for thought.

"People will raise their game against Swindon Town and we've got to make sure we are very difficult to beat and, if we do get beat at home, then they are going to have to earn it and work very hard to beat us at home." 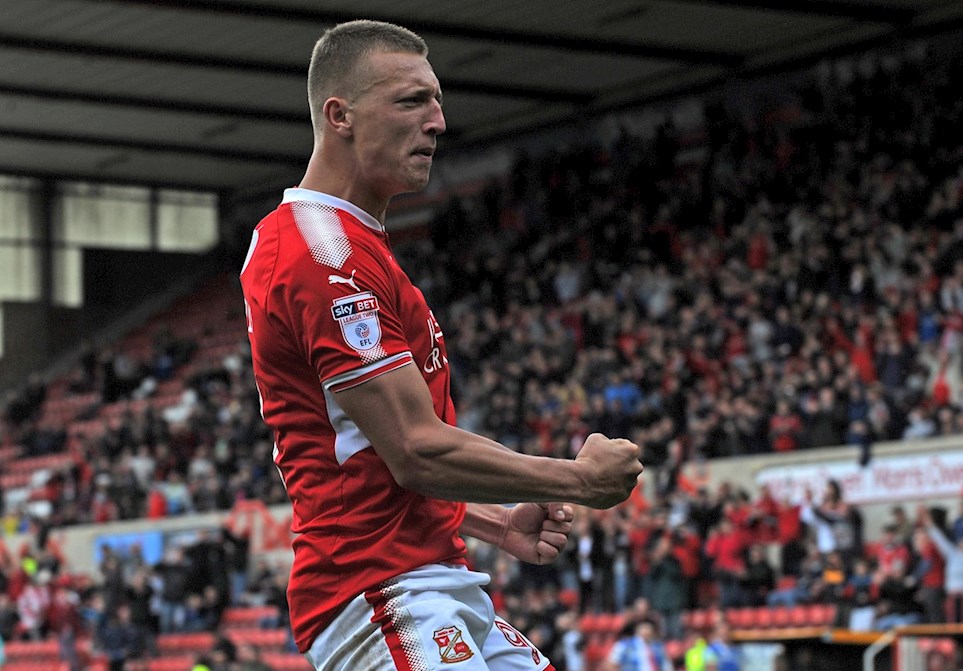 Norris In Team Of The Week


Luke Norris has been included in the EFL's Team of the Week following his heroics at the weekend. Anderson - We Were Worthy Winners


Keshi Anderson felt Swindon Town were more than good value for their 3-2 win against Stevenage on Saturday.


Luke Norris' brace and a first Swindon Town goal for Keshi Anderson was enough to secure a 3-2 win over Stevenage at The County Ground on Saturday.

Quick-fire efforts from Luke Norris and Keshi Anderson handed the Reds a dream start as they flew out of the traps in emphatic fashion.

Matt Godden reduced the deficit after the break although that was quickly cancelled out by Norris' second of the afternoon and that proved to be enough, with Joe Martin adding a late consolation for the visitors.

Having been punished for failing to take their chances in their previous two home encounters, it was a different story this time around as Town added a clinical edge to their game.

Norris continued his fine start to the season with a close-range finish before he teed up Anderson to open his account for the club moments later.

Swindon were much the better side and they went close again with Anderson hitting the post but they were given a scare in the second-half when Godden hauled his side back into the contest, although Norris found the target again to put the Reds firmly back in the driving seat.

Stevenage did find the back of the net once more thanks to Martin's free-kick, but it proved to be too little too late with Town running out deserved winners.

Dave Flitcroft made just two changes from the side that suffered a 1-0 defeat to Notts County in midweek.

James Dunne returned from illness to replace Matty Taylor in a holding midfield role, while Kellan Gordon was handed his full debut for the club with Kaiyne Woolery dropping to the bench.

Town, lining up in a 4-2-3-1 formation once again, had to be alert early on as their guests looked to make a fast start, but it wasn't long before they began to grab the game by the scruff of the neck.

Gordon fizzed a low ball across the face of goal which just evaded Keshi Anderson, and that proved to be a sign of things to come with the Reds taking an early lead moments later.

With just nine minutes on the clock, Chris Hussey produced one of his trademark corners and it worked a treat with Luke Norris on hand to stab home his fifth goal of the season.

It got better for the hosts minutes later as Norris turned provider, producing an excellent ball to pick out Keshi Anderson who was able to tuck home from close-range.

Stevenage looked to respond with Matt Godden sending a tame header into the arms of Lawrence Vigouroux, but Town were soon back on the attack with Norris warming the palms of Joe Fryer with a firm drive.

The visitors were enduring a bad day at the office and it didn't get any better with Danny Newton sending a header way over the bar.

Town were attacking with a real swagger and a confidence and they were unlucky not to add a third with Norris thudding inches wide from 30-yards. Dave Flitcroft was forced into making a change just before the break with Chris Robertson replacing Dion Conroy, who had sustained an injury in an attempt to prevent Tom Pett from getting a shot away, which sailed wide.

It was a superb first-half from the home side and it could have got even better in stoppage time with Norris, who had been sensational in the opening 45-minutes, drilling a low shot into the chest of Fryer.

Town continued where they left off after the interval and they so nearly grabbed a third as Anderson smashed a thunderous strike against the upright.

That missed chance gave Stevenage a way back into the game and, just after Pett sent a volley over the bar from Joe Martin's cross, they halved the deficit.

Matt Godden was picked out inside the area and he was able to convert from close-range, while he went close moments later after glancing a header just wide.

Town soon composed themselves again though and they were able to restore their two-goal advantage just past the hour mark.

Martin was adjudged to have got a hand to Gordon's cross and Norris was able to keep his cool to stroke home his second of the afternoon from the penalty spot.

Town continued to flex their attacking muscles in the closing stages of the game and they were launching wave after wave of attack in order to increase their lead.

Anderson then warmed the palms of Fryer but there was to be late drama at the other end of the pitch with Joe Martin dispatching a late free-kick to set up a nervy finish.

However, the Reds saw out the remainder of the game to pick up a valuable three points at home.

Norris In Team Of The Week


Luke Norris has been included in the EFL's Team of the Week following his heroics at the weekend.

Anderson - We Were Worthy Winners


Keshi Anderson felt Swindon Town were more than good value for their 3-2 win against Stevenage on Saturday.


Luke Norris' brace and a first Swindon Town goal for Keshi Anderson was enough to secure a 3-2 win over Stevenage at The County Ground on Saturday.