Swindon will be looking for their first home win of 2019 as Forest Green visit the County Ground this weekend.

After a defeat to Crawley last week at SN1, Richie Wellens’ men are hoping to return to winning ways against Rovers and improve their home form which has seen them pick up a point so far this year.

Last weekend’s defeat to Crawley had been preceded by a positive run of two wins and a draw against Macclesfield and Tranmere away from home, split by a dramatic draw against Lincoln at the CG.

Rovers’ form heading into Saturday’s fixture is good – they’ve only lost once in two months (10 games). That loss came at home against Bury but since they’ve had wins-to-nothing against Grimsby and Stevenage as well as a draw against high-flyers Mansfield.

The Nailsworth side’s top scorer is Christian Doidge despite him spending most of the season so far on-loan at Bolton – his goal tally stands at seven after three goals in his last three, including a brace against Grimsby.

Mark Cooper is a familiar face to Town fans – appointed in 2013, he led the club to 8th in League One in his first season in charge. The following season was a memorable one – a thrilling semi-final against Sheffield United (that 5-5, at the County Ground) set up a chance for promotion at Wembley. It was not to be as the Robins were denied on the day by Preston North End.

Since his stint at Swindon he has been in charge of Notts County – he was set a points target which he met, but decided to leave to become manager of the Green.

After moving back to the West Country, this time to Nailsworth, Cooper guided Forest Green to promotion from the National League spending the best part of 20 years in the top tier of non-league football. He and the Green defeated Tranmere Rovers at Wembley, and made Nailsworth the smallest town to host a Football League club.

After keeping them up last season, Cooper now has his side well and truly knocking on the door of League One. 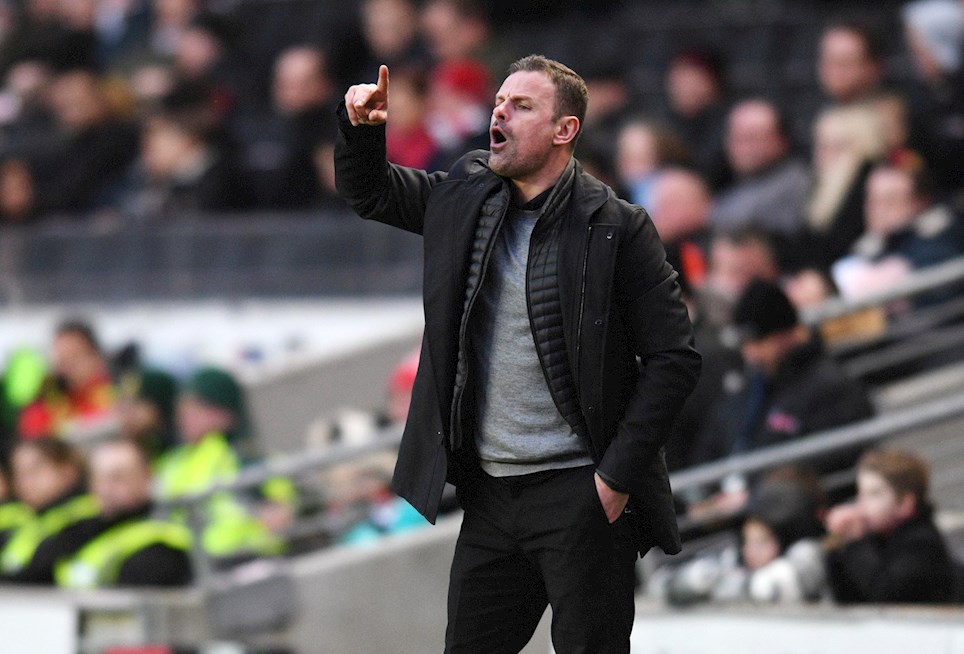 Kaiyne Woolery and Theo Robinson were on the scoresheet as Swindon won at home for the first time in 2019.

In a game of few chances, two moments of quality decided the affair in the first half – Woolery’s powerful drive followed by Robinson’s assured finish were enough to seal all three points and back-to-back wins for the first time since November.

It was very much cat and mouse for long periods of the opening 45 minutes – Dion Conroy’s crucial interception stopped George Williams from a clear sight of goal just before the half hour.

Three minutes later and things started to heat up – Ali Koiki skipped past Liam Shephard and drilled a cross to the front post where Robinson held off his man but had a first and second effort saved by Lewis Ward in the Rovers goal.

However, the County Ground erupted on 35 minutes, Woolery brought the ball under his control 20 yards out, shifted onto his left and let rip leaving Ward with no chance as the ball cannoned in off the inside of the post.

And in a razzle-dazzle eight minutes of football, Town were two up – Keshi Anderson worked the ball past the Green’s midfield, toe-poked a pass inside to Robinson who cut back and was effortless in sticking the ball past Ward into the bottom corner.

Swindon came out and looked comfortable again in the second half – despite being at home, Richie Wellens’ side looked content to let the visitors keep the ball but absorb everything that Mark Cooper’s side posed them with.

Lawrence Vigouroux was still in fine form after his stellar display at the weekend – George Williams worked him hard on 53 minutes. The Chilean keeper had to dive low to his right to tip onto the post and out.

Ali Koiki was next up to work to maintain Town’s clean sheet – the ball fizzed across the six-yard box before the left-back nipped in and cleared not once but twice with Christian Doidge lurking.

Swindon’s only really chance came after the hour mark – Kaiyne Woolery drilled into the side-netting from similar distance to his goal with half the Don Rogers Stand thinking it was in.

The highlight of the half was a bit of incredible defending from Dion Conroy – sliding towards his own goal, it looked inevitable he would the unfortunate one to inadvertently put into his own net but a deft touch put it round the post, to the defender’s and the home fans’ relief.

For the remainder of play, Town were comfortable, as they had been throughout and saw out an impressive victory.