Swindon head to Macclesfield this Saturday off the back of a disappointing defeat to Exeter on New Year’s Day.

Town conceded a penalty that, on second viewing, appeared well outside the area, with Jonathan Forte converting before Archie Collins scored his first professional goal from 25 yards to seal a 2-0 home defeat.

The Robins will be looking to bounce back against the Silkmen, who have had a slight upturn in results since the appointment of their new manager at the end of November.

The Cheshire club had only won twice all season before Sol Campbell’s appointment as boss – although he was in the stands for the third of those wins, on the day of his appointment, against Exeter.

Since then, they’ve only lost two in six and risen off rock bottom of the table and put themselves in with a shout of avoiding the drop.

Scott Wilson has been the man that has started to fire for the Silkmen – he’s scored three in their last three, including a match-winning double in their vital clash with Notts County, who now sit 24th, below Macclesfield.

Swindon have only played Saturday’s opponents seven times in their history but the last time out was by far the most memorable.

Michael Doughty’s last-gasp debut hat-trick with two penalties in injury time sparked pandemonium at the County Ground back in August on the opening day of the season as Town grabbed a 3-2 win.

Town’s previous win over the Silkmen came in 2012 – Paul Benson scored that day with the only goal of the game.

Probably the biggest name in League Two – Sol Campbell’s playing career boasts Premier League titles, FA Cups, League Cups, as well as 73 England caps. He is regarded as one of the best English centre-backs of his generation and was part of the Invincibles – the Arsenal side that went unbeaten in the Premiership in 2003/04.

Since ending his days as a player in 2012, Campbell has been increasingly vocal about British politics and in February 2015, he announced his intention to run for Mayor of London. However, he was not shortlisted.

Campbell has spoken out about issues such as racial diversity in the FA as well as party politics during the 2015 election campaign.

Since taking the reigns at Moss Rose, Campbell has had a positive impact making them tougher to beat – the Silkmen have only lost two since his arrival. 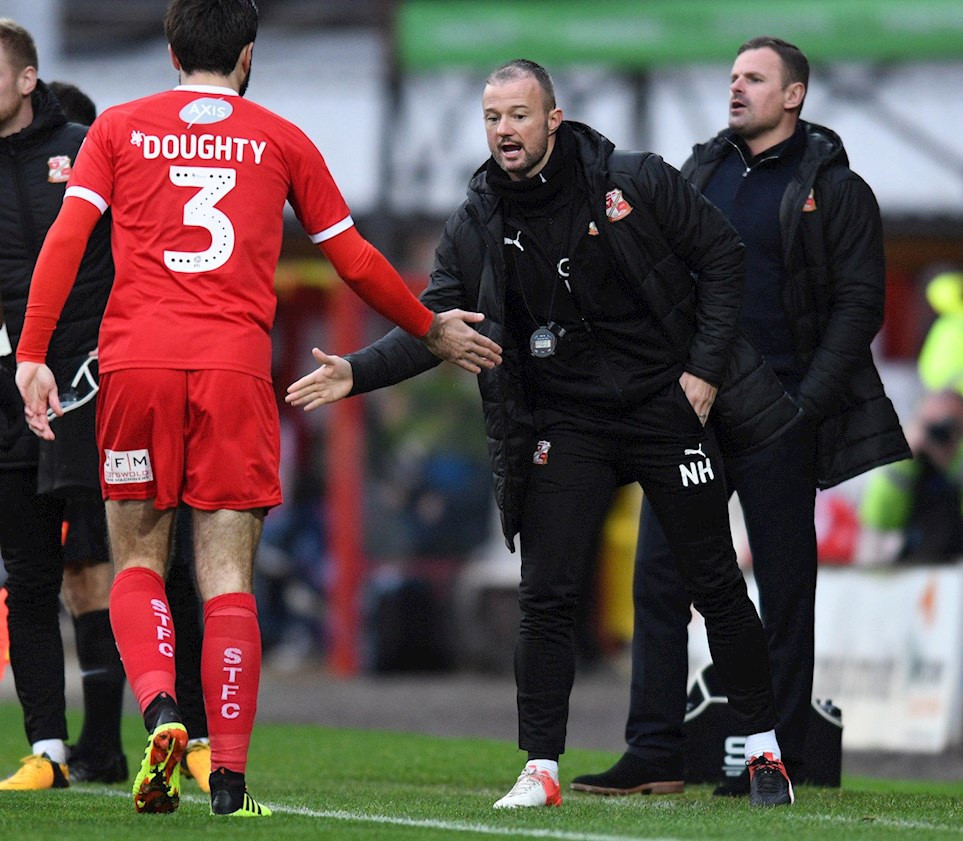 Swindon were beaten 2-0 by Exeter on the first day of the new year at the County Ground.

A first-half penalty from Jonathan Forte and a cultured strike from Archie Collins sealed Town’s fate and ensured a disappointing opening day of 2019.

Dion Conroy almost got the year off to a thrilling start – he struck from 30 yards and Pym managed to tip over.

Keshi Anderson was up next – he picked the ball up wide on the left and cut inside, beating four men he worked his way into the box only for Pym to be quick off his line and smother the ball.

And the attacker was almost the man to put Town ahead five minutes later. His cross was inches away from finding the onrushing Jak McCourt at the back post.

Exeter’s first foray forward came 25 minutes into the New Year’s Day clash – Lee Martin cut the ball back to Matt Jay and Luke Woolfenden had to be in the right place to head over the bar.

Ten minutes later, Exeter had the lead – Sid Nelson was caught on the edge of his box by Jay and the centre-half tripped the Exeter man although whether it was inside or outside the box was up for debate.

Jonathan Forte went right with his spot-kick, Vigouroux went left and the Grecians were in front.

Richie Wellens looked to shake things up at half-time bringing on the experienced Marc Richards for Elijah Adebayo – and the change in focal point almost paid dividends within five minutes of the restart.

Richards cleared from a corner, Anderson sprung away carrying the ball forward, he found McCourt who squared to Doughty but the midfielder’s shot went over the bar.

The substitute striker was involved again 20 minutes later – he flicked onto Doughty, who found Woolery down the right. His cut back was inch-perfect for Anderson but his shot found the Town End rather than the Exeter net.

Three minutes later and the Grecians had doubled their lead. Archie Collins picked up the ball 25 yards out and bent an excellent effort past Vigouroux into the corner of the net.

From then, Town were limited, really, to efforts from outside the box – Doughty linked up well with Twine but his eventual shot found the hands of Pym.

Jak McCourt had Town’s final try at goal – his 25-yard drive was well-hit but wide of the mark.