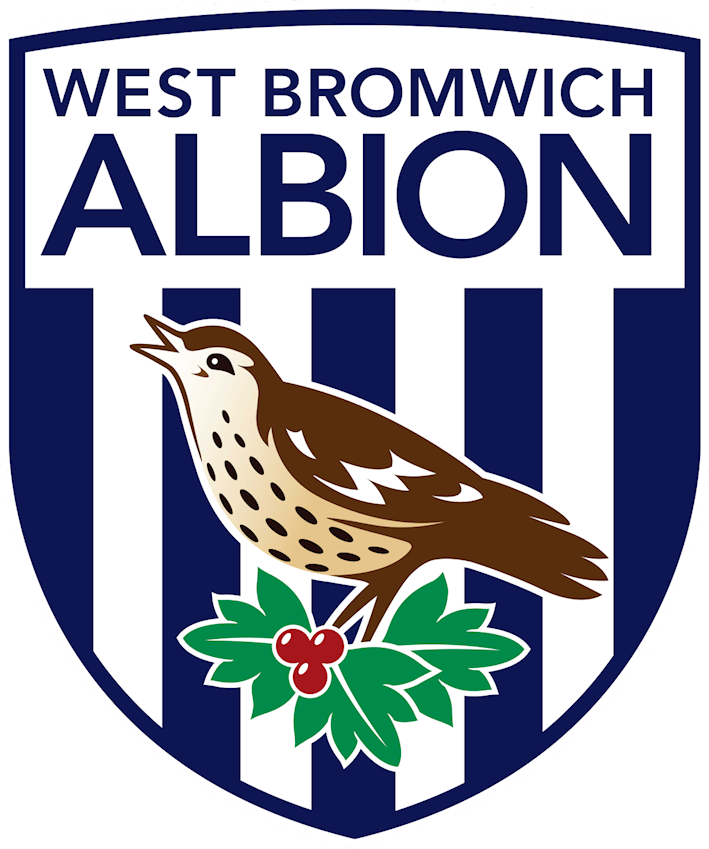 The game kicks-off at 3pm and we've put together a useful guide to get you in the mood for the game...

Tomorrow's friendly will be split into two games of 60 minutes with a 15 minute half-time break in-between the two matches.

There will also be a water break on the half-hour mark in both games due to the hot temperatures expected tomorrow afternoon.

The first game will see a full-strength Town side take on West Brom's first-team with the sides having both returned from pre-season breaks in Spain and Scotland respectively.

And the second game will involve a younger Swindon outfit against Albion's U23s with getting minutes into players still crucial at this stage of pre-season.

Fans are reminded that ONLY the Arkells and Better Town End stands will be open for tomorrow's game.

The Legends Bar will be open from 12pm for home fans only but will shut immediately after kick-off.

West Brom fans will be able to use Bar 71 from 12pm, which is located at the end of the Arkells Stand.

West Brom supporters heading to the game can also check out our handy Away Fans' Guide by clicking HERE. 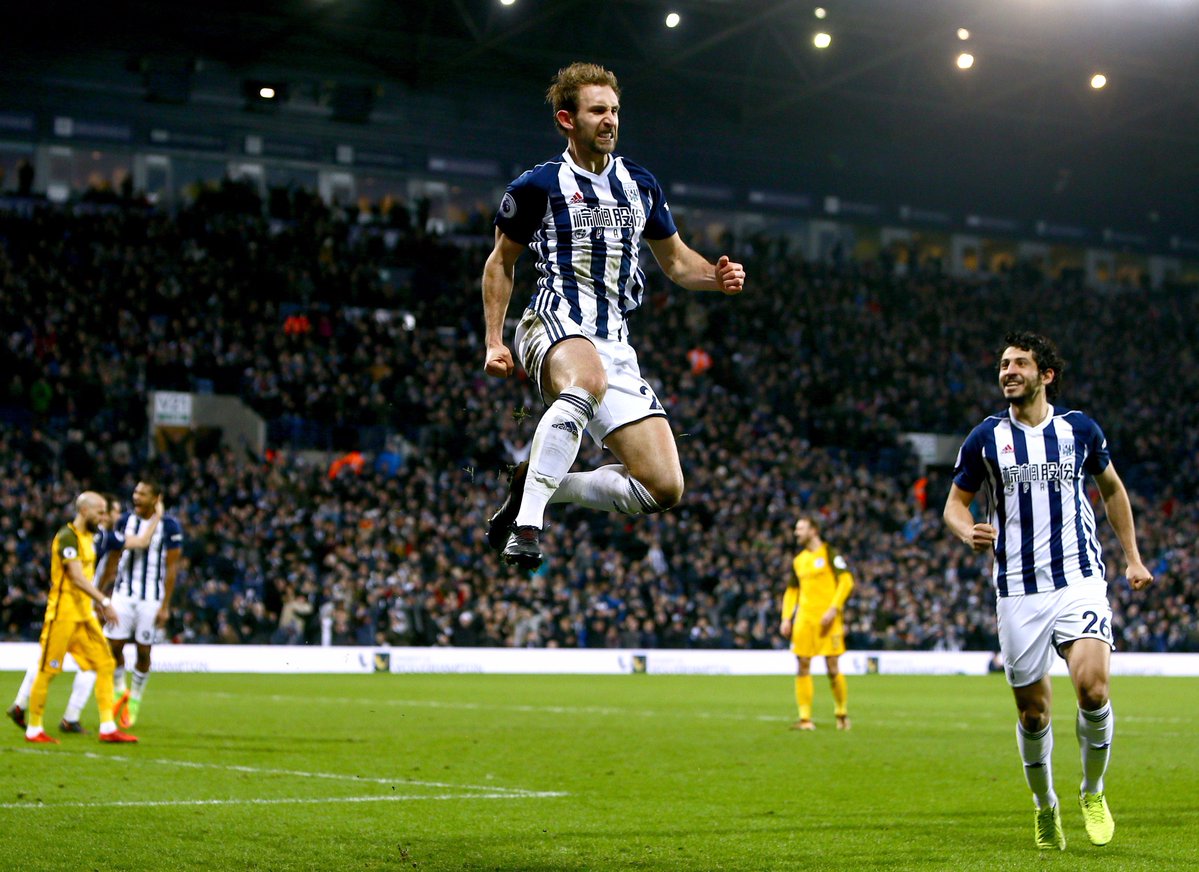 Swindon Town Football Club would like to urge both sets of fans to keep up to date with travel info ahead of tomorrow's game due to the 2018 Air Tattoo taking place at Fairford this weekend.

Town will be without the injured pair of Marc Richards (shoulder) and Kaiyne Woolery (leg) for tomorrow's game, although everyone else should be fighting fit and raring to go.

West Brom will field a strong team in the first game tomorrow with the likes of James Morrison and Jake Livermore expected to be involved.

VIEWS FROM BOTH CAMPS: 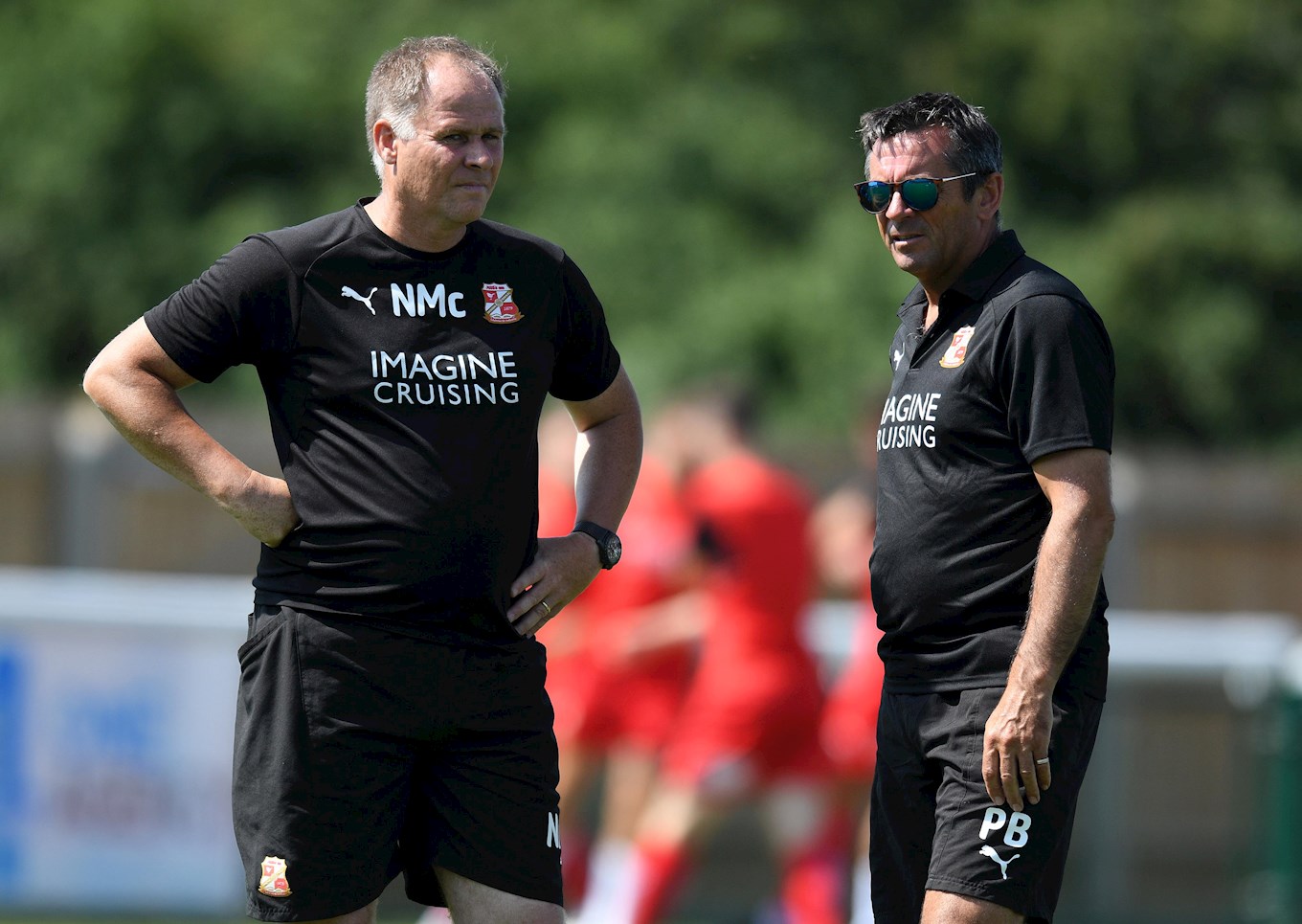 Darren Moore, West Brom Head Coach: "Swindon always provide a good test and it will be good to give the boys a chance to stretch their legs.

"It will be a difficult game which is what I want while at the same time we can look at some of the bits and pieces that we have been bringing to the players for game situations.

"I know Phil Brown really well, he's a really experienced manager who will have his team well set-up, and we are really looking forward to the game after a good week's work."

Swindon Town put in an impressive display over 120 minutes despite slipping to a 3-1 defeat to West Bromwich Albion in a pre-season friendly at The Energy Check County Ground earlier today.

The game was split into two games of 60 minutes with a 15 minute half-time break in-between the two matches.

The first contest saw Town's first-team take on a strong Baggies outfit with goals from Jay Rodriguez and Elijah Adebayo making it honours even at the end of the first 60 minutes.

And the second game was contested between two mixed sides with both teams fielding a number of youngsters, with Albion scoring twice to clinch the victory.

Town got the afternoon off to a bright start as they won a number of corners in the opening exchanges, whilst also creating a few chances. 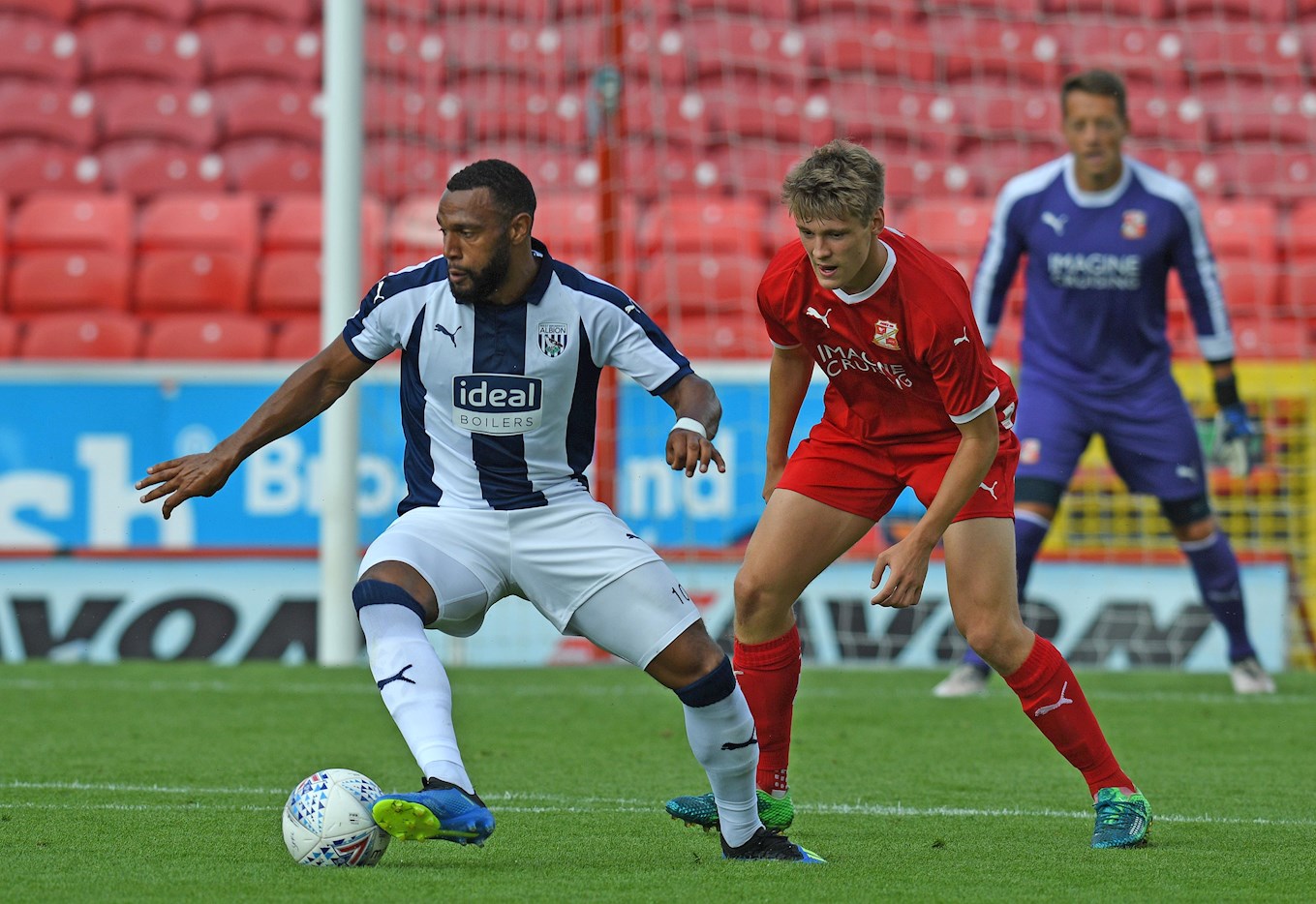 Elijah Adebayo, playing in his first friendly since arriving on a season-loan loan from Fulham, saw his close-range effort saved by Alex Palmer, before Chris Robertson sent a header over the bar.

Steven Alzate then fired wide from distance before Chris Brunt was also off-target with a long-range effort at the other end.

Town had Lawrence Vigouroux to thank for keeping the scores level just shy of the half-hour mark after he got down well to keep out James Morrison's low drive following good work from Kyle Edwards. 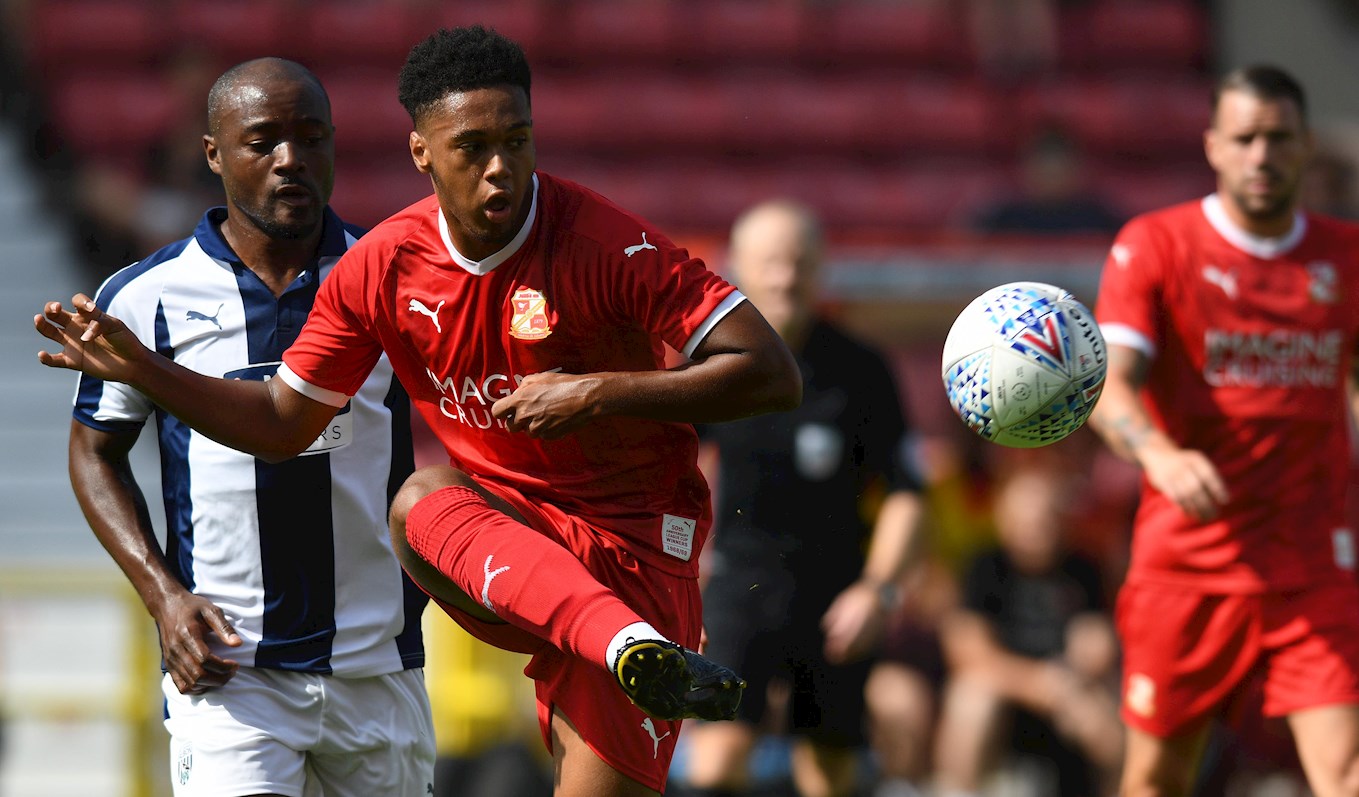 Both sides were passing the ball around well on what was an immaculate playing surface with the summer sun shining down.

Despite having the better of the possession early on, Town found themselves a goal down at the midway point in the first-half after Jay Rodriguez tucked home from Kane Wilson's pinpoint cross.

Phil Brown's side responded well, however, and they were unlucky not to haul themselves level after carving out a couple of good chances in quick succession. 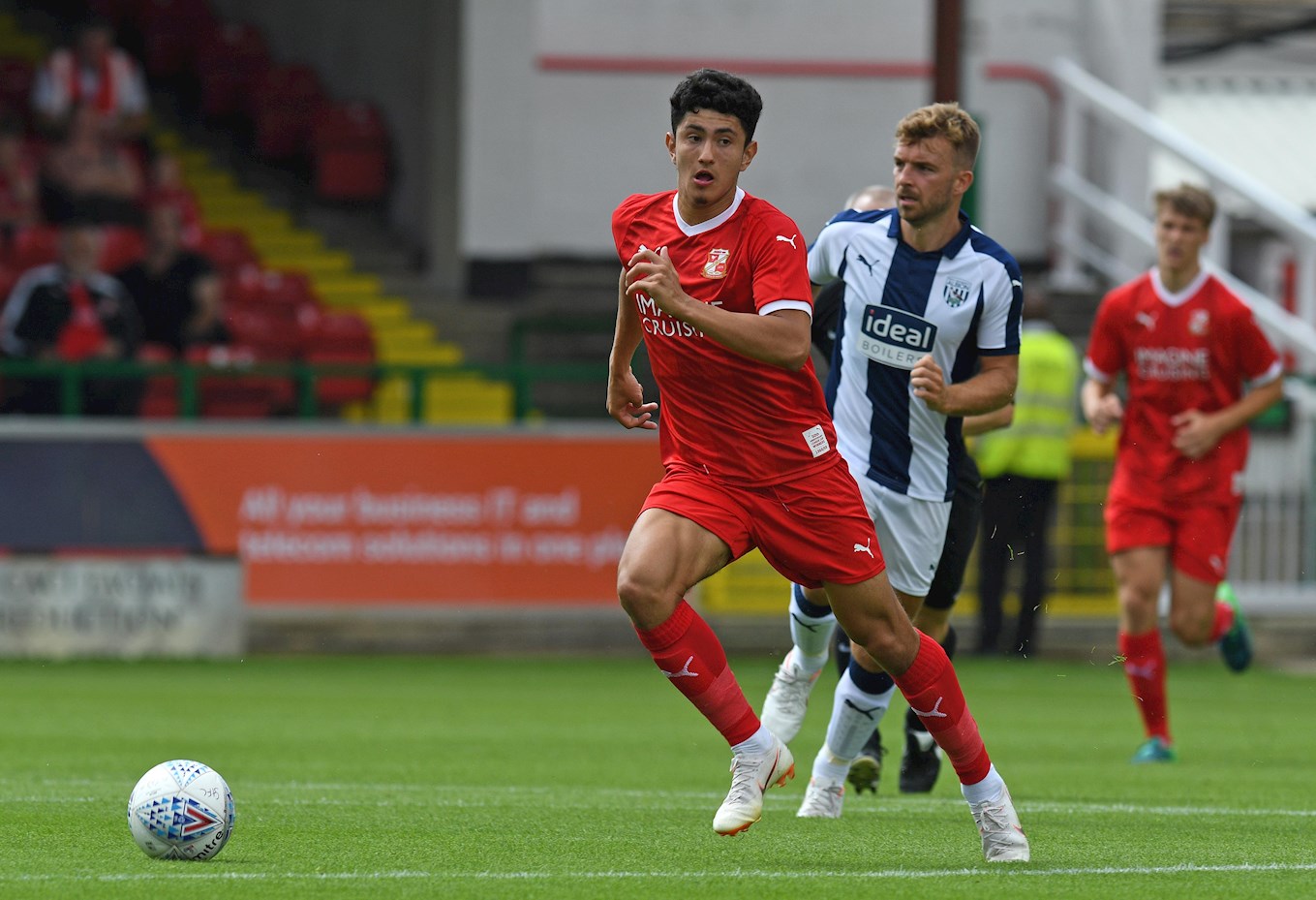 Ellis Iandolo's clever free-kick picked out Robertson at the back post but his diving header flew wide, before Adebayo turned his man inside the box and saw his shot turned away by Palmer.

But Town's pressure eventually told and they were level with 44-minutes on the clock thanks to Adebayo, who finished off a superb team move from close-range after Matty Taylor had picked out the on-loan Fulham frontman with a dangerous cross.

Town were looking dangerous towards the end of the first game and they went close to taking the lead on a couple of occasions with Taylor's well-struck free-kick saved and held by Palmer, before Iandolo fired a shot over the bar following a good spell of possession and Keshi Anderson bent a shot inches wide.

Both teams fielded almost brand new teams in the second game with the likes of Luke McCormick, James Dunne, Luke Haines, Jordan Edwards and Sol Pryce all getting a run-out for the Reds.

West Brom were able to restore their lead quickly after Edwards beat McCormick to a ball before rolling home a shot into the empty net.

Town responded straight away as James Dunne let fly from distance, although his shot was well kept out by Palmer. 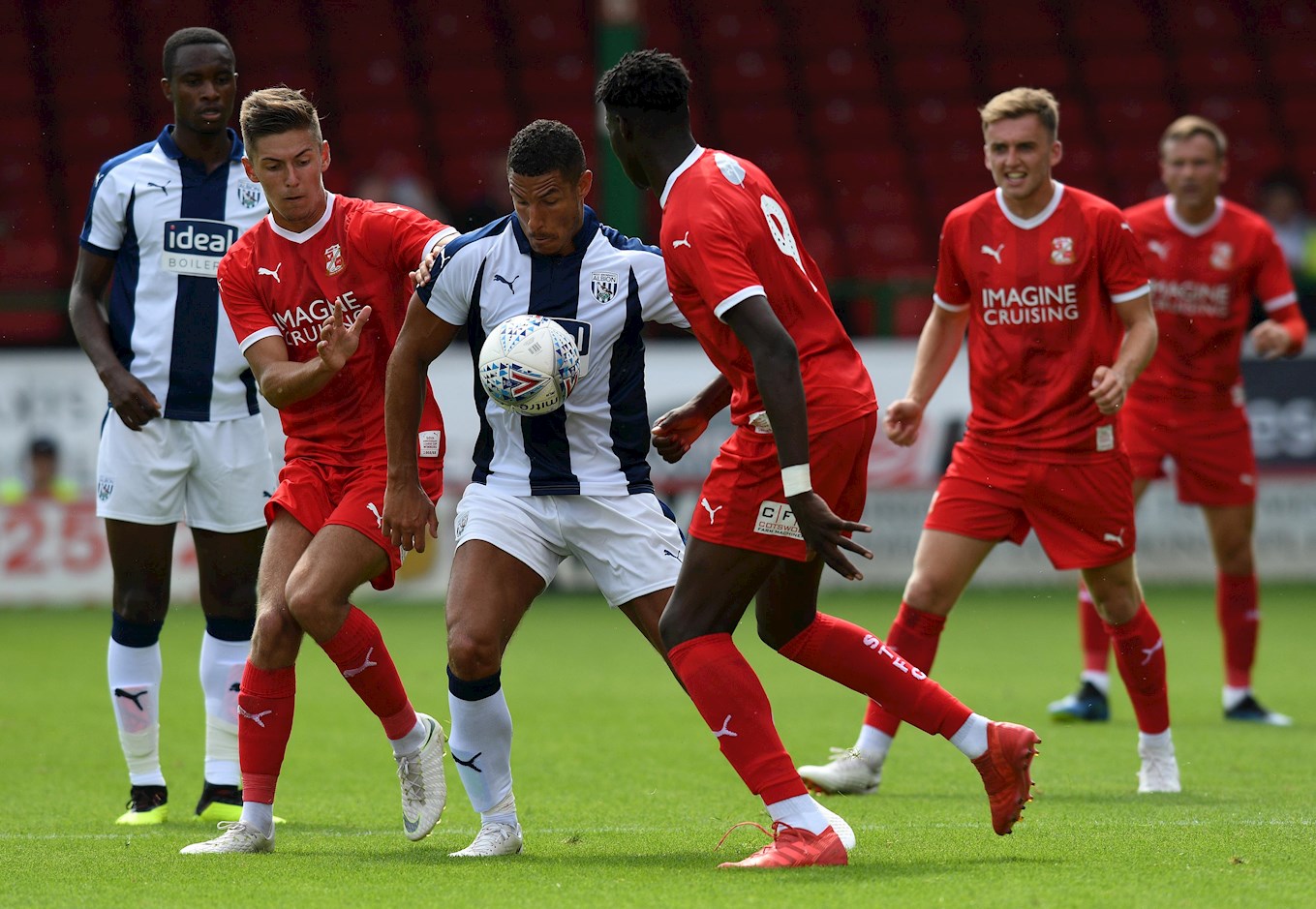 Lloyd Sam had a golden chance to even the scores moments later after being played in by Jordan Edwards, but his shot was smothered by Palmer.

And those missed chances proved costly as Kyle Jameson rose highest to head home a third for the Baggies.

Scott Twine sent a free-kick crashing back off the crossbar for Town, before Jordan Young's attempted lob over Brad House was cleared to safety with the game dropping in tempo.

Twine then flashed an effort across goal and that proved to be that with both teams achieving what they set out to do.