Swindon face York City for the first time in 23 years this Saturday in the Emirates FA Cup at the Energy Check County Ground.

The Robins will aim to qualify for the second round as they did last season, while York will be looking to make it through the first round for the first time since 2011.

Last season, Town started off their cup campaign in style – they romped home to a 5-1 win over Dartford Town with goals from Timi Elsnik (2), Harry Smith, Amine Linganzi and Paul Mullin.

However, they fell to a 5-2 beating away at Stevenage in the next round.

The season before that Town fell to non-league opposition – Eastleigh, of the National League, forced a replay on a Friday in front of the terrestrial TV cameras before beating Luke Williams’ side 3-1 at the Energy Check County Ground in the replay.

You have to go back to 2011 for a cup win against league opposition – Swindon overcame Huddersfield 4-1 at SN1 with Aden Flint, Raffaele De Vita, Mehdi Kerrouche and Simon Ferry all on the scoresheet that day.

That year, Swindon made it all the way to the Fourth Round, eventually losing to Leicester City after victories over Colchester and Wigan. Famously, Alan Connell and Paul Benson scored to overcome the then-Premier League Latics.

York City have been winless since their 1-0 win against Blyth Spartans in the fourth qualifying round of the Cup.

Sam Collins’ side went undefeated in six matches, including their win at Blyth Spartans but their winning form has nose-dived since.

The Minstermen have conceded seven goals in their last two matches to Spennymoor Town and Bradford P A, leaving them 15th in the Vanarama National League North.

Swindon have won four of the previous six meetings, but the two sides haven’t faced each other since 1996 where York City were victorious at Bootham Crescent.

Fraser Digby saved a penalty that day but was unable to stop the Minstermen from coming out 2-0 victors.

Sam Collins will relish his opportunity to take York City to the second round of the cup in his first full managerial job.

He was previously employed as the club’s youth team manager and took over as interim manager after Martin Gray was sacked in August.

Collins was signed permanently by then-Tigers boss, Phil Brown following a season on loan there, but was subsequently sent on-loan to Swindon two years later by the current Robins manager.

York City decided to promote Collins to firstteam manager after he won four games as Caretaker and drew two in his first eight matches, which meant they progress through the FA Cup.

Before taking the helm at Bootham Crescent, Collins was assistant-manager and coach at Hartlepool United. There, he experienced three spells as caretaker-manager during his time at the club.

Collins has had his share of FA Cup highs and lows during his playing career, he was part of the Hartlepool team that beat Premier League side Stoke City.

Although the Minstermen’s manager has endured shock defeats against non-League trio Northwich, Scarborough and Kettering in his time as a player. 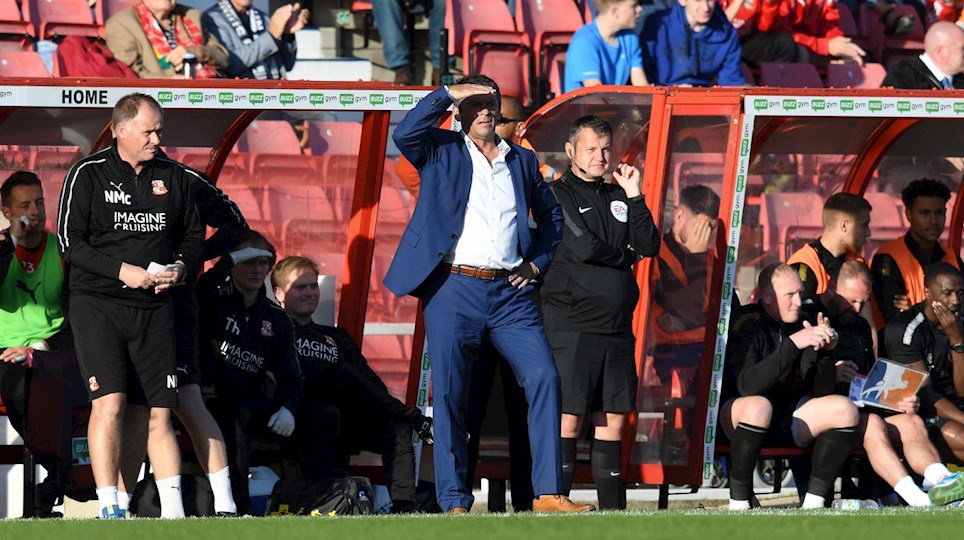 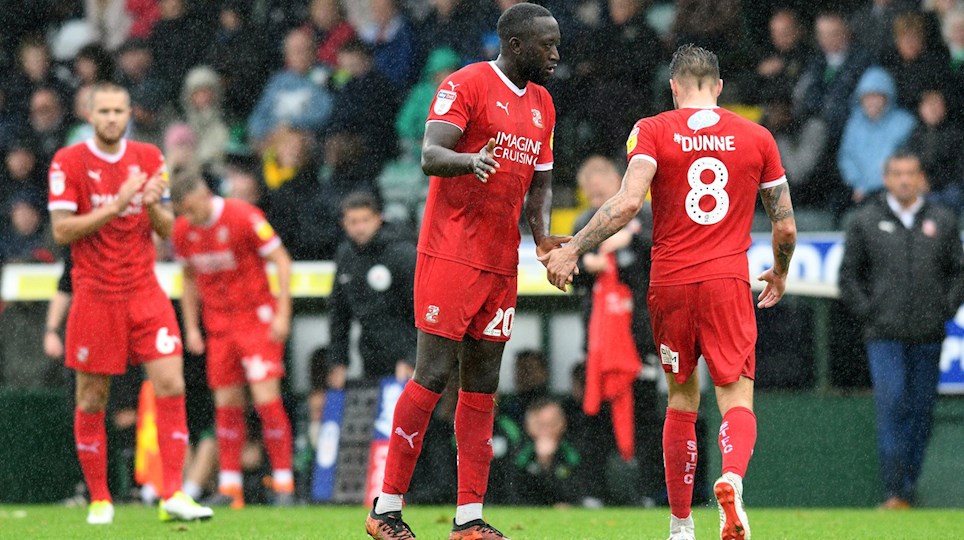 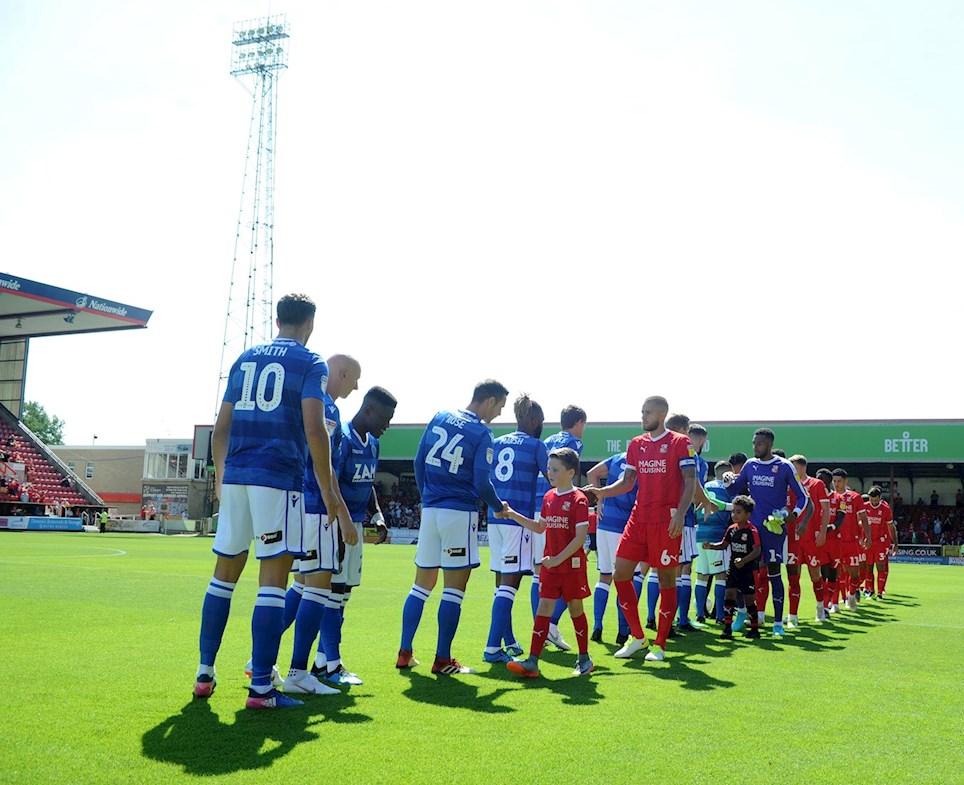 
Our highly recommended Mascot Experience is only £149.00 for this week's Emirates FA Cup tie against York City.

Swindon Town put themselves in the hat for the second-round draw of the FA Cup after beating York City 2-1.

Scott Twine scored his first ever professional goal for Swindon Town with a clever backheel as Swindon beat managed to break down a stubborn York City side.

The non-league Mistermen proved to be no push overs as the away side put in an excellent second half performance.

However, the spirit of the visitors wasn’t enough to force a replay at Bootham Crescent.

Man of the Match, James Dunne drove the team forward and it was his brilliant pass that allowed McGlashan to cut back to Alzate who fired home the winner.

Swindon showed their dominance throughout the first half, passing the ball round nicely and stretching the York city side.

It took until the 12th minute mark for Swindon to open the scoring. Jermaine McGlashan played a clever one-two with Elijah Adebayo, McGlashan cut the ball back across the face of the goal to Scott Twine who scored with a classy backheel finish.

Twine’s goal gave him a confidence boost, and minutes later his clever feet worked him some space to get a shot away from outside the box. He forced a good save from Adam Bartlett.

Only a minute later, Twine hit the post with an acrobatic effort after Keshi Anderson’s shot was blocked.

York City came close when Jordan Burrow latched onto a volley from a corner, his shot went wide but it was a reminder that the non-league club wouldn’t roll over.

But just as the half time whistle was approaching, York City linked up well down the right-hand side. Nathan Dyer crossed the ball to David Ferguson who towered over McGlashan. Vigouroux saved Ferguson’s initial effort but the rebound feel to Ferguson again who scored on his second attempt.

York City came out for the second half all fired up as they piled the pressure on the Robins.

The away team’s spirit was at a high early on and they nearly took the lead when Nathan Dyer’s header went wide.

Dunne’s presence grew, however, as he started to command the midfield. He latched onto a loose pass and drove into York’s box, he played the ball to Adebayo.

Adebayo kept his shot low, but Bartlett pushed it wide for a corner. The attack knocked York’s momentum and Swindon grew in confidence again.

Swindon began creating chance after chance, but it was man of the match James Dunne’s pass that split the Minstermen’s defence to McGlashan. His cut back found Steven Alzate who finished from close range.

That was enough to seal victory and put the Town through to the second round of the cup for the season season in a row.


Our highly recommended Mascot Experience is only £149.00 for this week's Emirates FA Cup tie against York City.

Swindon Town are pleased to announce ticket information for our upcoming fixture in the Emirates FA Cup against York City.

All stands will be open with the exception of selected areas of D1 and D7 in the Don Rogers / Nationwide stand and F1U in the Arkells.

Important Information - Season Ticket Holders will have their seats reserved for them until 12pm on Wednesday 7th November at which point they will be released for general sale. You can purchase your seat by logging in to your account via our E Ticket site and you will see a notification in the top right corner as a new offer and you can select either the add access to card option (which will put the game onto your season card) or post or collect which will issue you a paper ticket. You can also visit us in store.