Town head into this weekend’s fixture with Bury unbeaten in six (in all competitions) and looking for their third win-and-clean-sheet combination in a week.

Last Saturday against Morecambe, Elijah Adebayo’s tidy finish clinched a first away victory of the season for Phil Brown’s side.

Adebayo will go in search of his third goal in three league games against the Shakers – and his fourth of the season after his strike at Morecambe and last-minute equaliser last time out at the Energy Check County Ground; the Robins had trailed for, pretty much, a whole 90 minutes.

James Dunne and Toumani Diagouraga have both served their three-match bans after picking up a red card each against Crawley Town. However, right-back, Kyle Knoyle was sent off for a bad tackle on Aaron Wildig last weekend meaning he will miss the game.

The Shakers have started the season in a similar vein to Swindon – a mixed bag of results but they are, however, yet to win away from home so far.

Bury have won the same amount of games as Town – but have found playing away tougher than Town, losing three out of three on the road.

Bury fell victim to a last-gasp Ollie Palmer strike in their last trip away against Crawley – not quite as late as his equaliser againsy the Robins just over a fortnight ago.

After Danny Mayor put them 2-1 up on 78 minutes, Panutch Camara for Crawley equalised before Palmer struck to deny them a first point away from Greater Manchester.

Last time out they dispatched of Grimsby quite comfortably, however – Mayor (2), Will Aimson and a Danny Collins own-goal sealed a 4-0 thrashing at Gigg Lane.

Bury are yet to lose a game by more than a single goal and have conceded the highest proportion of goals in the latter stages of games – they’ve conceded five goals after 76 minutes; the same amount that Swindon have scored in that time period.

Swindon's post-2010 record against Bury is not the best. James Collins scored for Town the last time they beat Bury, back in 2012 - opening the scoring in the first minute of the match.

BROWN: IT WAS A COLLECTIVE ISSUE


Swindon suffered defeat at the Energy Check County Ground for the first time this season as Bury ran away 2-1 winners. 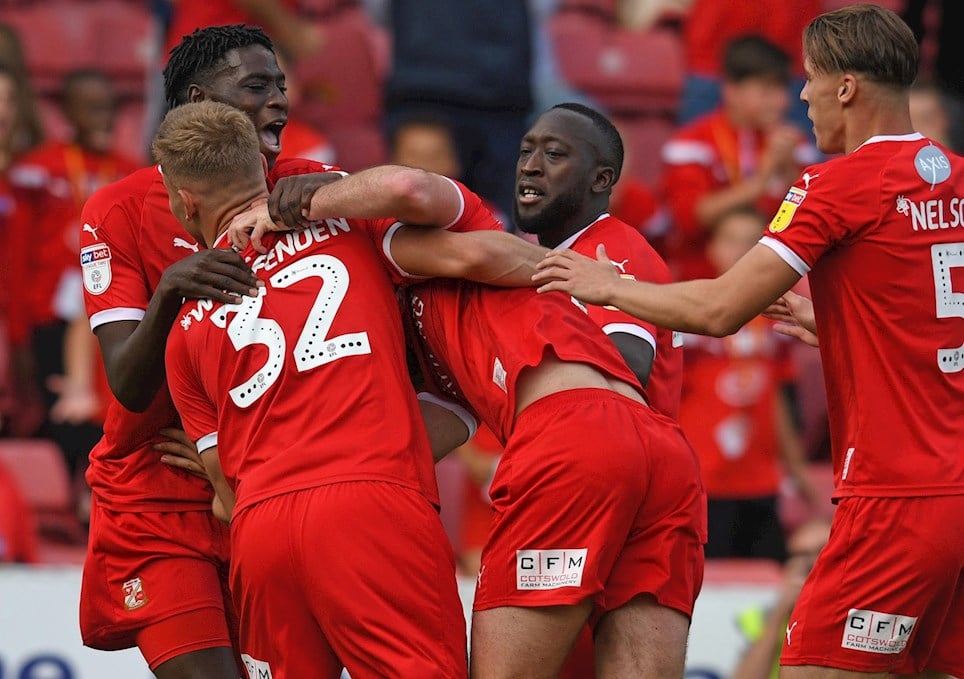 Swindon suffered their first home defeat of the campaign as they fell 2-1 to Bury at the Energy Check County Ground.

Luke Woolfenden scored his first league goal in the 55th minute but Byron Moor bagged a brace to seal victory for the Shakers.

Town started poorly – Chris Dagnall almost opened the scoring on 17 seconds. The ball broke loose in the box and Luke McCormick had to be sharp to keep the scores level.

Swindon were keeping the ball but were meeting a Bury side determined to obtain their first points away from home this season, as they struggled to create anything clear cut.

Neil Danns was next up to try for the visitors – he let fly from 25 yards but Sid Nelson managed to get his head in front of the goal-bound shot.

Two minutes later, with 18 minutes gone – Byron Moore opened the scoring – Nelson couldn’t stretch far enough as he slid in out wide and Moore blasted a shot towards McCormick who had no chance of keeping the ball out.

Swindon were huffing and puffing but not getting much joy – Marc Richards had half an opening but was caught in two minds as to pass or shoot and Adam Thompson made a crucial tackle as Town’s captain hesitated.

Jermaine McGlashan got in down the left but after being felled by Chris Stokes, Kevin Johnson was unmoved and pointed for a goal-kick not a penalty.

After the break Town started to work the ball better – and were rewarded five minutes into the half when Sid Nelson rose and nodded a header to Luke Woolfenden – he finished on the volley past Murphy who was left sprawling.

But on 55 minutes, Bury were back in-front – McCormick tipped a low shot onto the post but Bryon Moore was quickest to the rebound and he finished into the corner.

The Shakers looked to stop the flow of the game, and were successful in stopping Town getting into any sort of rhythm.

And that rocked the home side with Bury looking the more likely to score the next goal – Toumani Diagouraga blocked a goal-bound Moore shot – sparking an almighty goalmouth scramble with McCormick saving twice and Nelson eventually clearing.

It took until the 76th minute for Town to fashion anything of particular note – McGlashan worked the ball inside from the right and squared to Keshi Anderson who flashed a shot past the post.

Two minutes later, Murphy was called into action again tipping over a Joe Romanski cross that almost found its way under the crossbar.

After Town had already gained seven points from losing positions at the Energy Check County Ground this season, they couldn’t quite make it past a strong Bury defence.

BROWN: IT WAS A COLLECTIVE ISSUE


Swindon suffered defeat at the Energy Check County Ground for the first time this season as Bury ran away 2-1 winners.