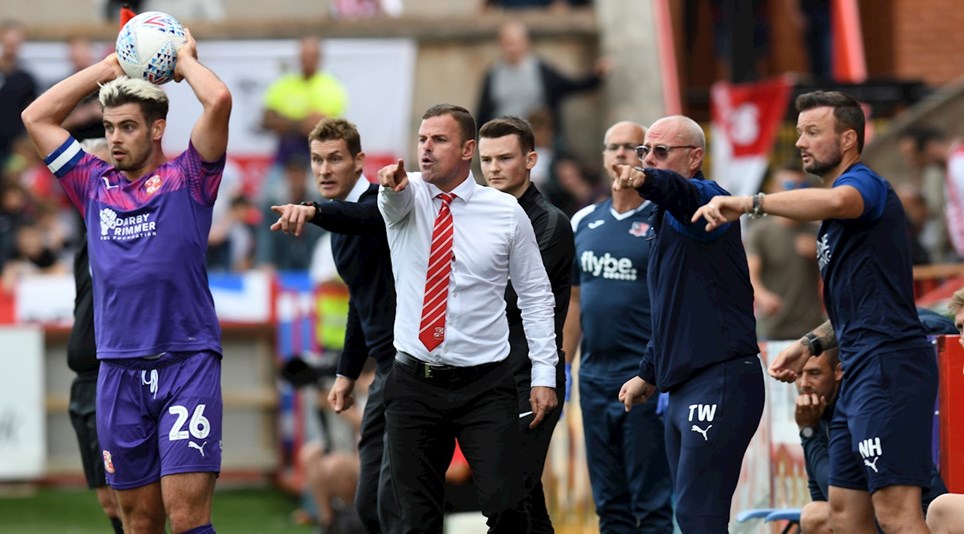 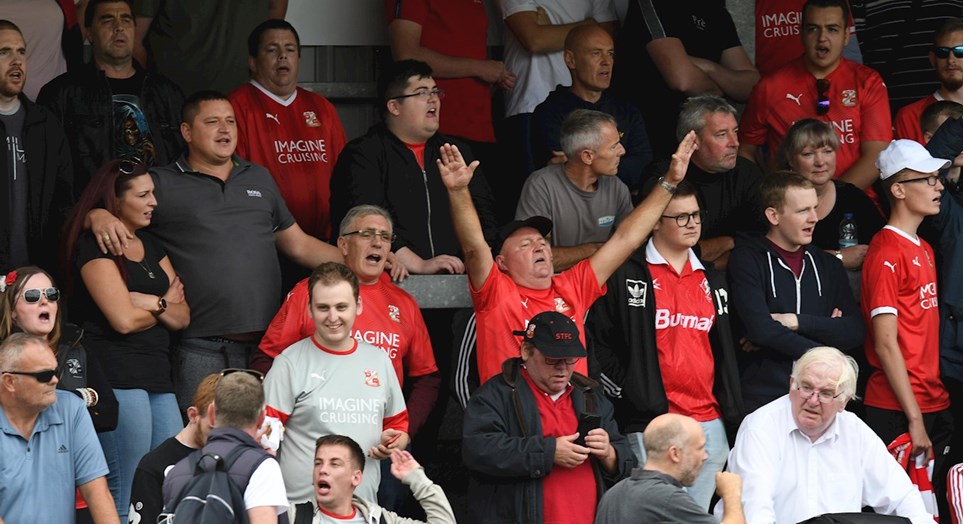 Eoin Doyle’s late debut goal rescued a point for Town taking them top of the league after a 1-1 draw with Exeter.

Doyle struck with five minutes to go equalising after Matt Jay had poked the hosts in front on 75 minutes.

Town had fashioned the better of the chances, especially in another positive first half, but couldn’t take the lead and their hosts worked their way back into the game after Matt Taylor’s half-time team talk.

In an entertaining tie a point was probably a fair result.

The visiting Robins kicked off proceedings in positive fashion. Doyle, with almost his first touch in a Town shirt, flicked Lloyd Isgrove in behind. He drove towards goal but appeared to be pushed by Aaron Martin – he hit the ground, colliding with Grecians keeper Lewis Ward but the referee waved away appeals for an early spot-kick.

Ten minutes later and it was Martin’s heroics that prevented Swindon taking the lead – Doyle, involved again, had a shot blocked from Kaiyne Woolery’s cross before the ball fell to Keshi Anderson. His shot looked destined for the net but the Exeter centre-half managed to divert the ball away from goal centimetres from the line.

Town continued to press and probe and went just as close on 21 minutes – Doyle was set by Isgrove, turned on the edge of the box and bent an effort past Ward but not inside the upright. The ball cannoned back of the post much to the dismay of the 1,063 Town fans behind the goal.

Town didn’t quite have it all their own way, however. Mathieu Baudry had to do some of his own heroic defending stopping Ryan Bowman’s drilled effort with his chest as he slid in front of the shot.

Town started the second half, again, the brighter of the two sides. Rob Hunt’s cross almost had Dean Moxey turn the ball into his own net. From the resulting corner, Michael Doughty stung the palms of Ward with a rising effort that had Town’s support hoping for a continued performance.

It was Hunt that popped up and nearly scored in unlikely fashion – Isgrove’s deflected cross floated over Moxey’s head but Town’s right-back was stretching to get there and turned his header wide.

For 15 minutes, Exeter slowly worked their way back into the game, making it scrappy and difficult to get a foothold. On 71 minutes, substitute Matt Jay put the hosts in front, poking home from short range.

Swindon reacted and slowly edged their way back into the ascendancy and for a brief moment, had the reward. Doyle pressed goalkeeper Ward’s clearance and the ball ricocheted into the net; however, after the roar went up from the away end, the goal was disallowed for handball.

However, Doyle and the away end didn’t have to wait too long for the equaliser. After a flowing move, that didn’t belong to a team chasing a game, Zeki Fryers fizzed a low cross to Town’s new striker who finished with Ward left clawing at air.

That goal left Town top of the league to end a positive opening three weeks of the season.

Swindon have been allocated both the Main Stand and the new Away Terrace.

Supporters have until 12pm on Friday 16th August to purchase tickets for this fixture. Tickets will also be available on the day to Swindon supporters with a £1 increase

All tickets not collected from STFC will be taken up to Exeter City by our official coach travel for supporters to collect on match day.