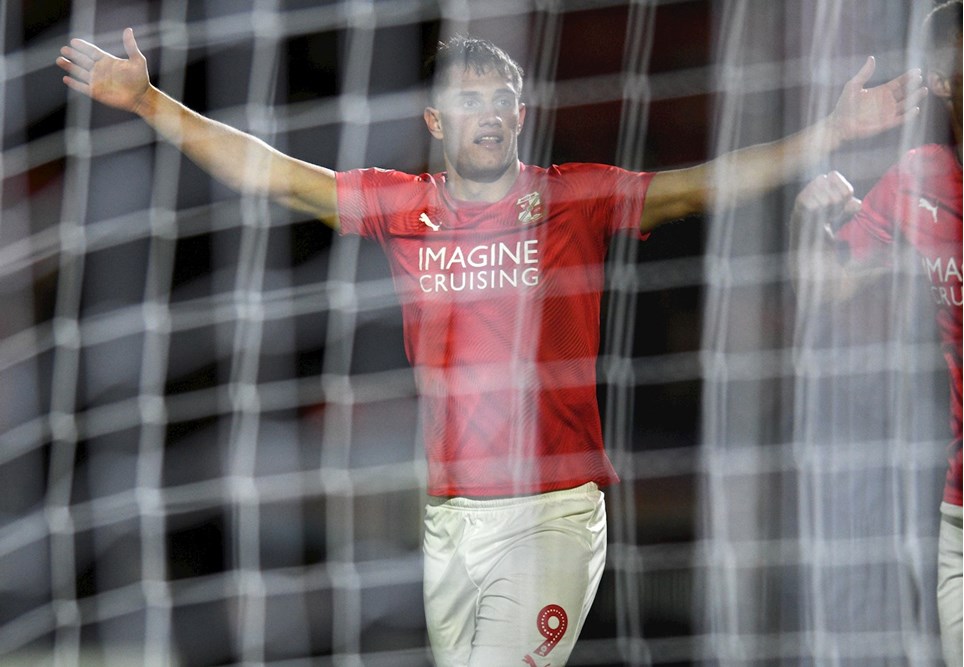 GALLERY: YATES AT THE DOUBLE AT BLUNDELL

Swindon made it six wins on the spin as they comfortably saw off Grimsby at Blundell Park.

Jerry Yates grabbed a brace with Eoin Doyle opening the scoring as Town won the game by three goals to nil.

From start to finish, Richie Wellens’ side were at least a yard sharper than their Lincolnshire counterparts and full deserved the three points.

Total dominance was the order of the first half. Town had all of the ball, all of the chances and all the swagger of a team deserving their table-topping status.

The first two chances resulted in two goals. Ten minutes was all it took for Eoin Doyle to resume his streak of scoring – eight consecutive games now – after last week’s hiatus.

Michael Doughty picked up the seconds on the edge of the box after Kaiyne Woolery’s cross was cleared – his swept ball was met by Doyle whose looping header wrongfooted James McKeown and ended up over the line despite the Grimsby keeper’s despairing efforts.

McKeown was just as unfortunate 14 minutes later when Jerry Yates’ effort was deflected past him to add a second – Zeki Fryers cleared the ball on the edge of his own box, Anthony Grant picked up the ball and set Yates away down the left. He cut inside and opened up to shoot to the far side but his effort struck the leg of Luke Waterfall and rolled tamely into the back of the net.

Grimsby’s defending really did leave a lot to be desired and they were guilty of ball-watching on 41 minutes when Doyle could have had a second- Woolery’s shot was deflected into the six-yard box and the Mariners’ whole back four stood as the ball fell to Doyle. It was a only the body of Waterfall that stopped a deserved third.

The Robins didn’t have to wait too long into the second period for their next goal though – after eight minutes of more intricate play and patient probing, they got their just rewards.

Doughty was, once again, involved – he prodded Yates in down the left – he chopped his man, sending him sliding away, before drilling an unstoppable effort into the net.

The rest of the half was bitty – Grimsby had their first shot on target on the hour mark, which was met by ironic cheers from a home crowd that got increasingly on their own team’s back.

Foul after foul from both sides slowed the game down which suited Swindon who were happy to keep things as they were.

GALLERY: YATES AT THE DOUBLE AT BLUNDELL

Swindon have been allocated the Osmond Stand.

Supporters have until 12pm on Friday 6th December to purchase tickets for this fixture. Tickets will also be available on the day to Swindon supporters

All tickets not collected from STFC will be taken up to Grimsby by our official coach travel for supporters to collect on match day.