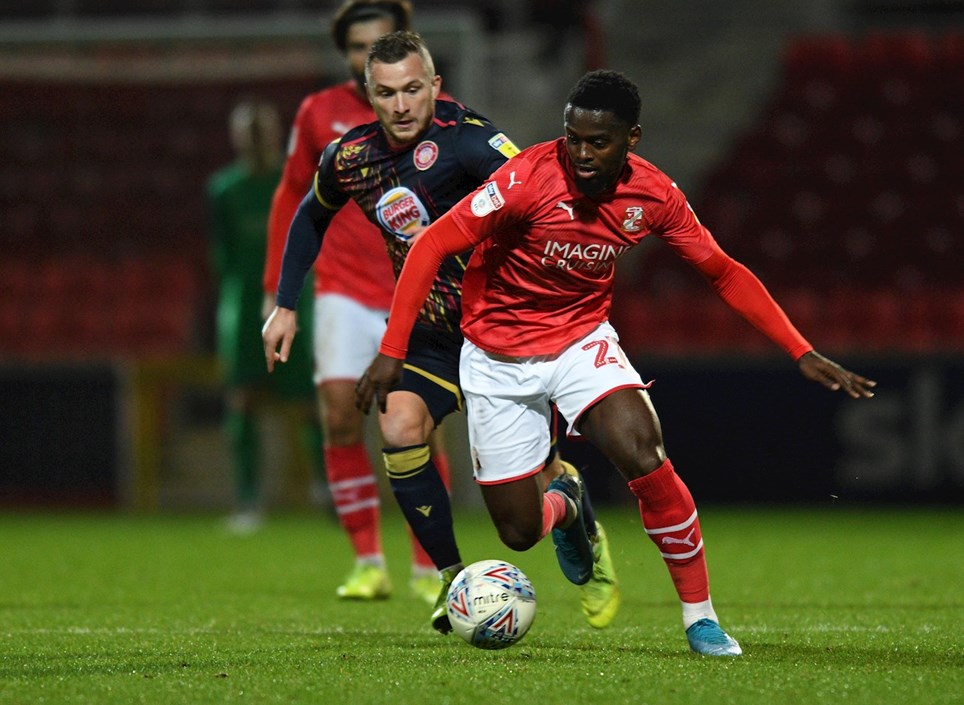 Eoin Doyle’s last-gasp winner sent relief around the County Ground as Town got back to winning ways against Stevenage.

Doyle was, once again, in the right place at the right time to grab a 1-0 win after Town had dominated their Hertfordshire opponents throughout.

Swindon have endured a run of difficult games and a period of injuries and had to remain patient to pick up their first three points since victory against Cambridge.

This one took a while to warm up. Neither side even had a sniff of goal until the 23rd minute although Swindon were far ahead in the possession statistic.

As half of the half passed Lloyd Isgrove skipped down the line and clipped a cross into the danger area where Eoin Doyle seems to live at the moment. The league’s top scorer couldn’t guide his header either side of Paul Farman as he craned his neck to get connection.

Five minutes later and Town were getting into more of a groove. Michael Doughty, on his return to the starting line-up, picked up the ball from deep and split the Stevenage defence in two setting Dion Donohue free. His cross was too powerful for Jerry Yates to get his body in the right shape to guide in.

Stevenage were limited to long balls and long range efforts with Emmanuel Sonupe having the visitors only real effort; however, that came from a full 30 yards out.

Town had to stick to their guns all the way through the second half. It felt like it would take a moment of magic to unlock the banks of five and four that Stevenage had brought with them. That moment nearly came seven minutes into the half when Isgrove picked the ball up on the halfway line and danced all the way through the Stevenage defence. He made it to the penalty area and was upended on the penalty spot – the defender may have won part of the ball but the challenge was from beind. Referee, Alan Young was unmoved.

Two minutes later, it could have been another. Kaiyne Woolery dribbled down the line and drove the ball into the box – Yates took the ball in and shot on the spin. His effort flashed just wide.

Frustration began to set in as the Town dominated but failed to break down stubborn Stevenage. Diallang Jaiyesimi made his home bow and made an impact – he wriggled free down the left hand side and worked a shot but Paul Farman embodied the Stevenage style and refused to be beaten. He was tipping, clawing and parrying the ball away in the space of three or four seconds to keep the score level.

It had taken all night but it came. The goal that Town had thoroughly deserved. Of course, it was Eoin Doyle. Who else? The Irish striker played a clever one-two with Rob Hunt on the right and found his way into the box for one last chance. Hunt found him. Doyle chested it down and rifled it low and hard past Farman to give Swindon a thoroughly deserved victory.