Swindon Town are back in EFL Sky Bet League Two action when they take on Leyton Orient at the Breyer Group Stadium later tonight.

After beating Walsall in the Emirates FA Cup on Saturday and then being rewarded with a plum home tie against Premier League giants Manchester City, it is back to the league for the Reds this evening.

Ben Garner's team have won eight straight on the road in all competitions and they will be looking to make it nine tonight, but they will have to be at their best against an Orient team who are very good at home.

Goals from Keshi Anderson and Jerry Yates, coupled with an own goal from Joe Widdowson, gave Town all three points in a 3-1 win against Leyton Orient away from home on Saturday 7th September 2019.

Town have sold over 850 tickets for tonight's trip to Orient, while fans wanting to pay on the day will be able to do so.

For those who have bought but have not yet collected your tickets, you will be able to do so from the Orient Ticket Office this evening.

Town should have no fresh injury concerns for this evening's game, which is good news for Head Coach Ben Garner. 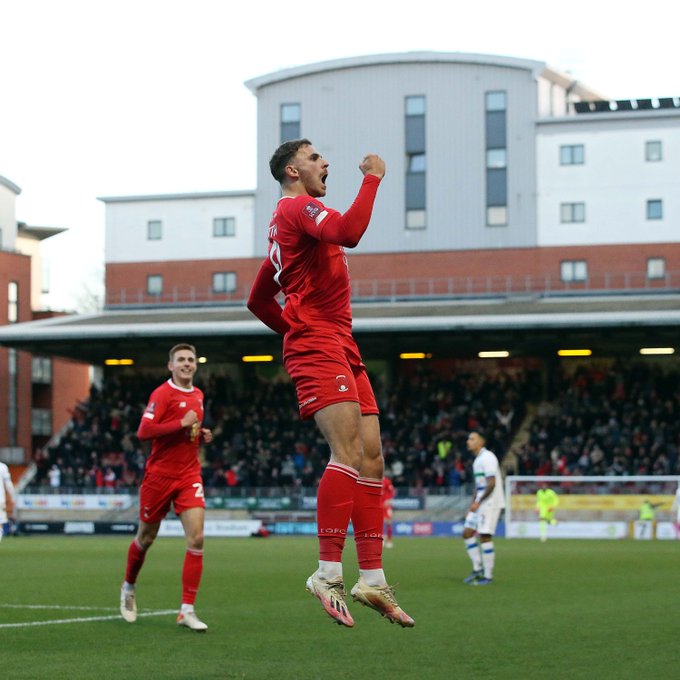 Harry Smith is well known to Town fans having spent a spell on loan at SN1 during the 2017-18 season, and he's been on fire for Orient so far this season.

Smith has bagged nine goals in 2021-22 and he poses a threat both on the floor and in the air, so he will be one to watch for Town this evening.

Kenny Jackett, Leyton Orient Manager: "They’re a good side, they are up there on merit. Both sides will be having aspirations and aims to be at the top of the league this season, and that leads towards a cracking game on Tuesday night.” 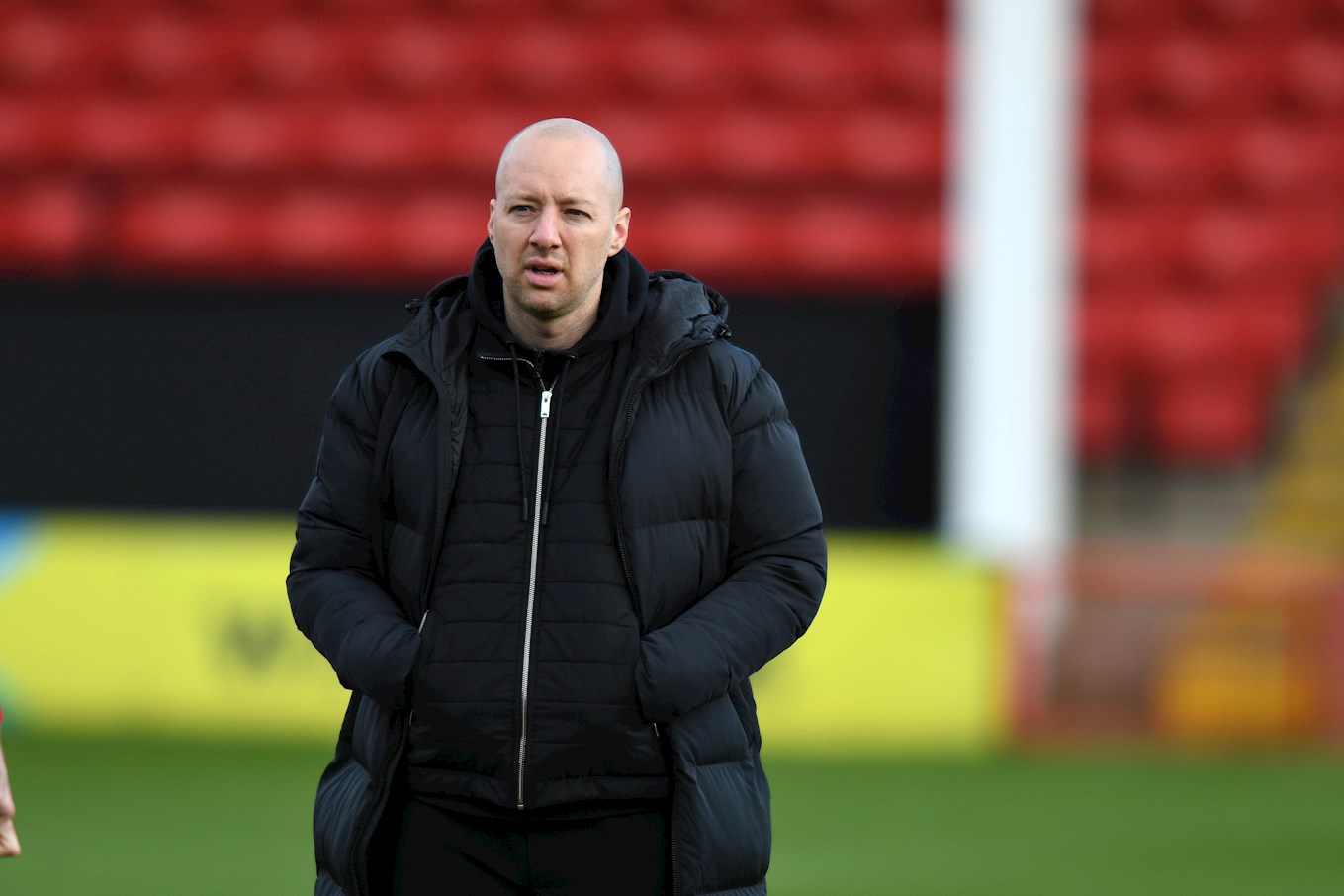 Ben Garner, Swindon Town Head Coach: "They are very well organised, they have a really good structure to their team, they work really hard and press very well without the ball and are very good on transitions and can play through the pitch very quickly.

"They are organised from set-plays and their long throws are a threat as well, so they are a good, good team and they had a bit of investment in the summer.

"They are a team that punish mistakes, they are ruthless so we've got to be very good with the ball."

Can’t make it to Leyton Orient? Don’t panic because there are numerous ways to keep up to date with all the action. 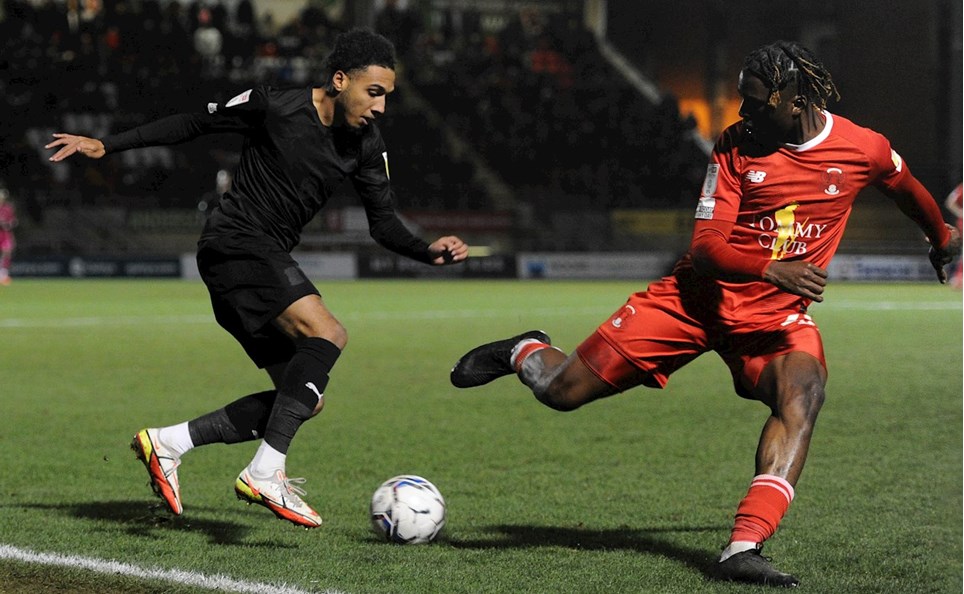 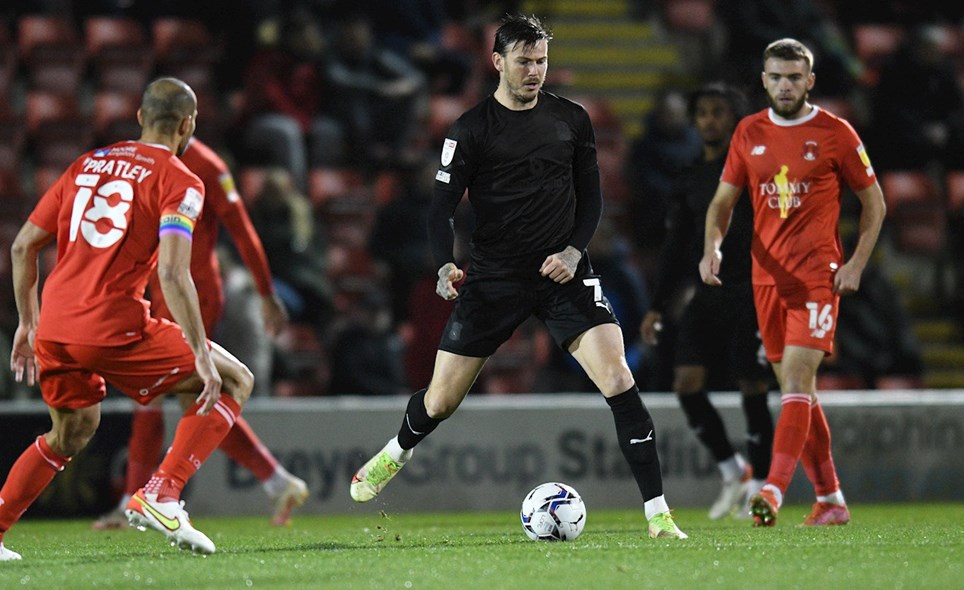 
Swindon Town endured a rough night at the office after losing 4-1 to Leyton Orient at The Breyer Group Stadium on Tuesday night. 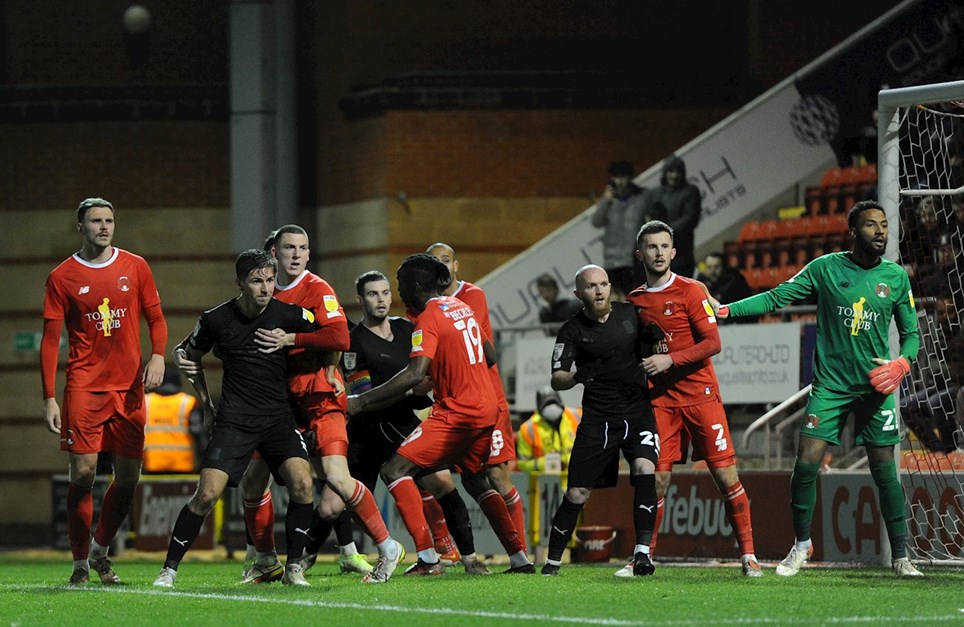 
Swindon Town suffered a tough 4-1 loss at the hands of Leyton Orient in the EFL Sky Bet League Two on Tuesday night. 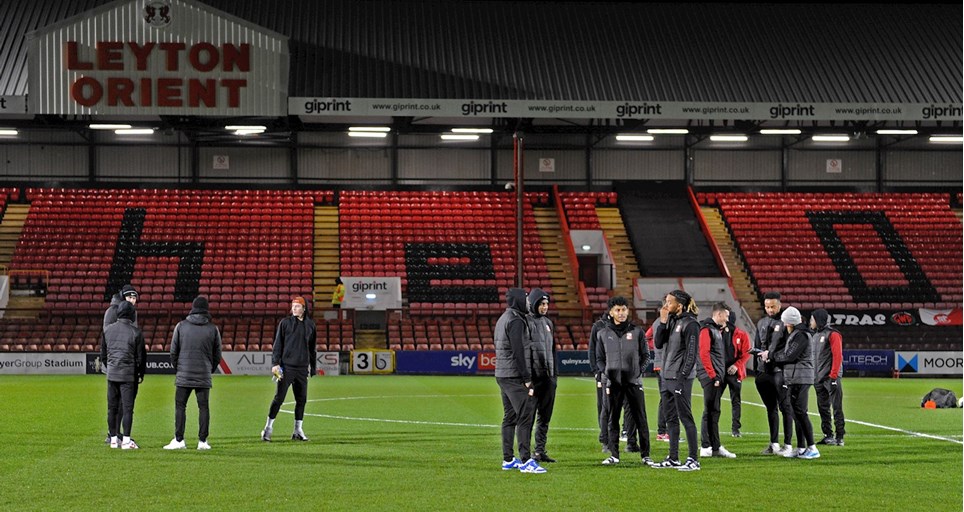 Swindon Town saw their winning streak away from home come to an end after suffering a tough 4-1 loss to Leyton Orient at The Breyer Group Stadium in the EFL Sky Bet League Two this evening.

Aaron Drinan continued his hot streak in-front of goal by putting the home side a goal up in the first-half, but Harry McKirdy's close-range header restored parity just before the break.

Drinan's second goal of the night gifted Orient the lead once again in the second-half, and Harry Smith struck against his former team quickly after, before notching yet again late on to seal what was an emphatic win for the home side.

Town Head Coach Ben Garner opted for two changes from the team that beat Walsall 2-1 in the Emirates FA Cup on Saturday, with the games coming thick and fast.

Romoney Crichlow came in for Rob Hunt at the back, while Ben Gladwin replaced Jonny Williams in midfield with the latter dropping to the bench along with Hunt.

Both teams were battling and doing a good job of cancelling each other out in the opening exchanges, with the two teams also intent on spraying the ball about and keeping possession. 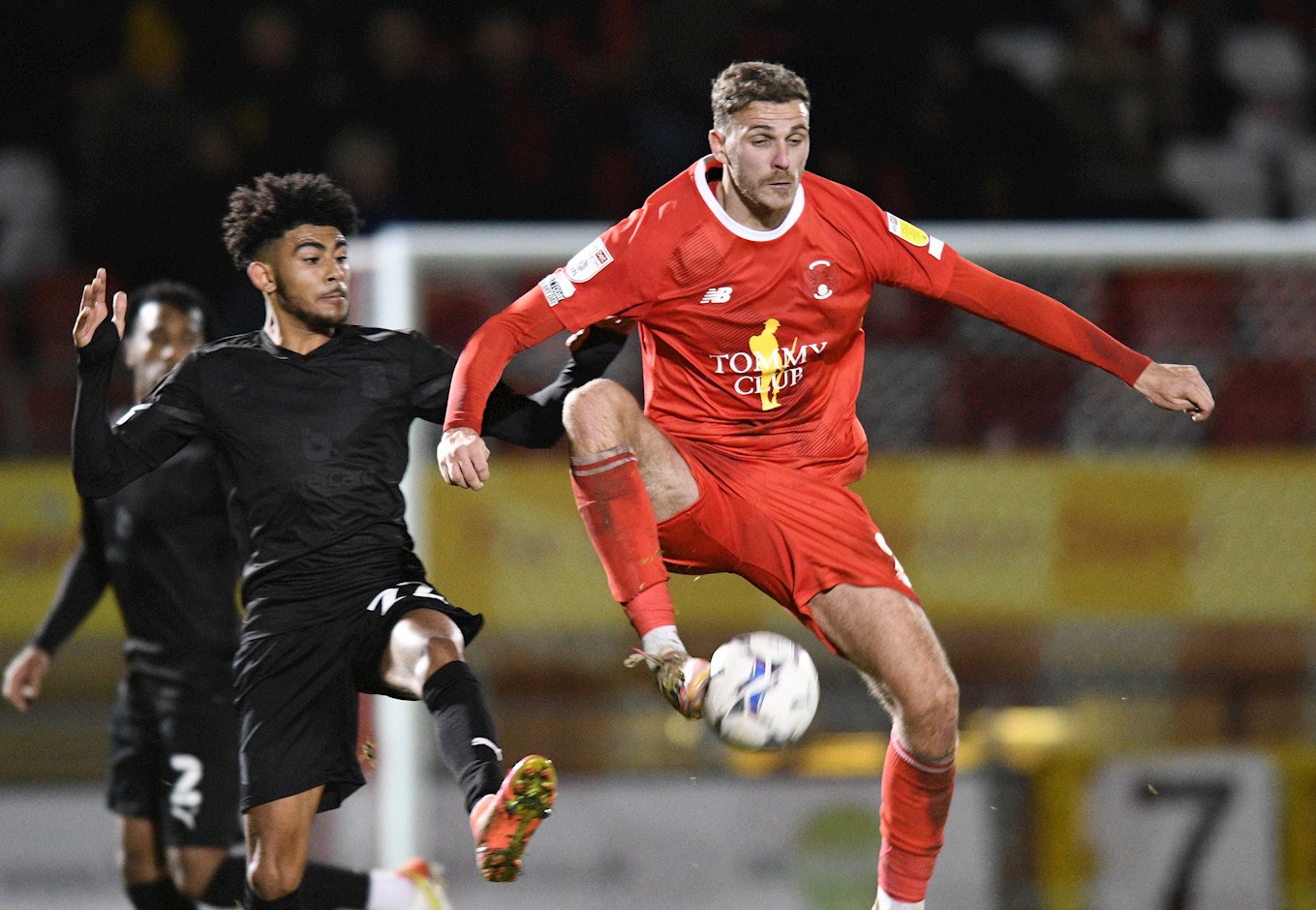 Ellis Iandolo had the first chance of the game as he nodded wide from a free-kick, but it was the hosts who would strike first.

The play was switched out wide to Tom James who fizzed in superb ball, and Aaron Drinan was able to get across goal and hammer home the opener for the O's.

Jack Payne tried to respond to the Reds but his low shot was smothered by former Town keeper Lawrence Vigouroux in the Orient goal.

Harry McKirdy then twisted and turned before dropping the shoulder to burst into the box, but his cross flashed across goal and out of play.

The chances for Town kept on coming as a corner fell nicely at the feet of Ben Gladwin inside the area, but the midfielder's volley on the turn flew way over the bar.

Town's pressure eventually told, though, and they were level just before half-time thanks to McKirdy, who headed home from Iandolo's cross following a swift counter-attack which was started by Jojo Wollacott. 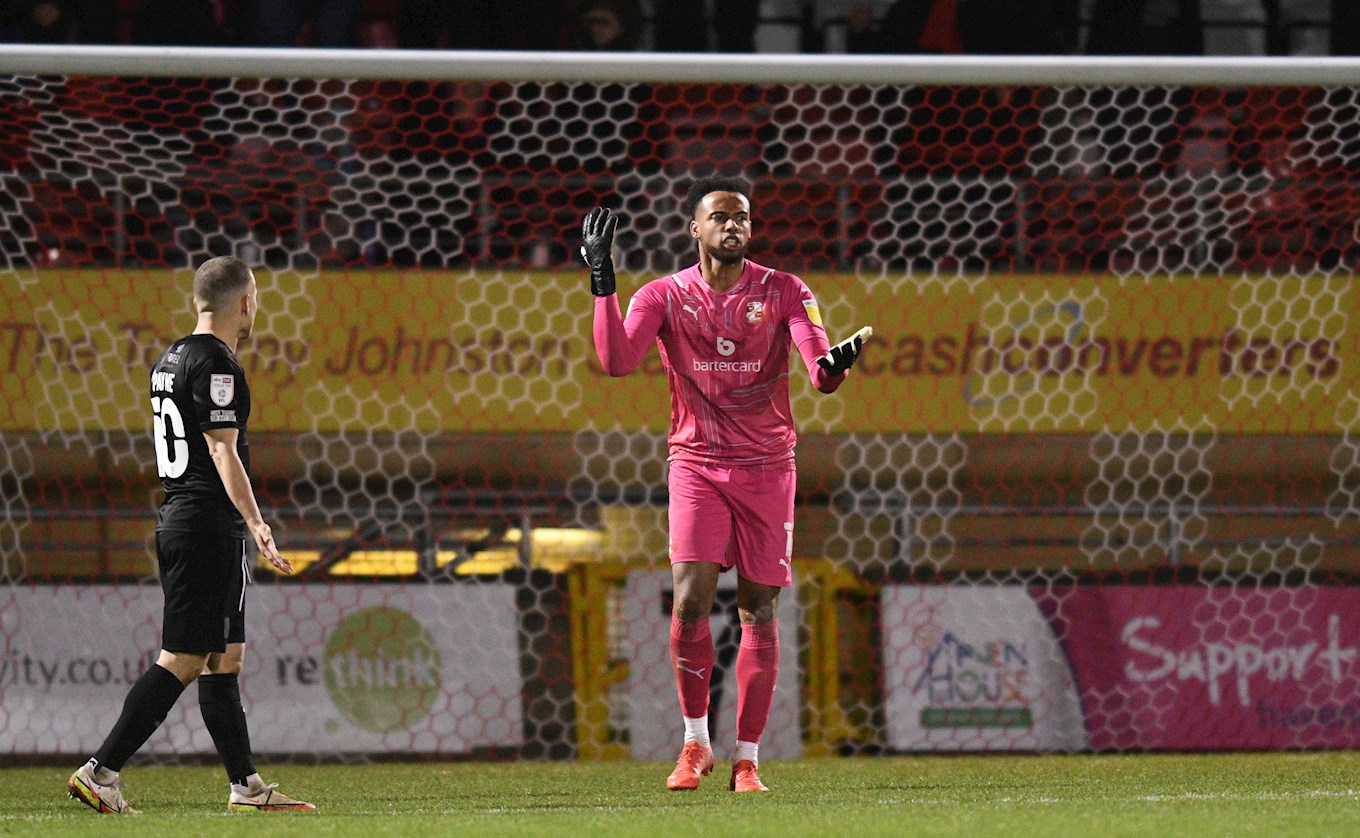 Orient started the second-half on the front-foot but it didn't take long for Town to start attacking with a real menace again.

Kesler-Hayden skipped past a couple of defenders and overcame a challenge to force Vigouroux into a fine diving save, before Iandolo did well to force his way into the box and he was inches away as he stabbed just wide.

Drinan was then played clean through on goal by Dan Kemp but he was beaten to the ball by Wollacott who was quick off his line, although Drinan quickly got revenge as he met Theo Archibald's superb cross moments later to score his and Orient's second goal of the game.

And it only got worse for the Reds minutes later as former loanee Harry Smith made it 3-1, controlling the ball inside the area before smashing it home moments after glancing a header wide. 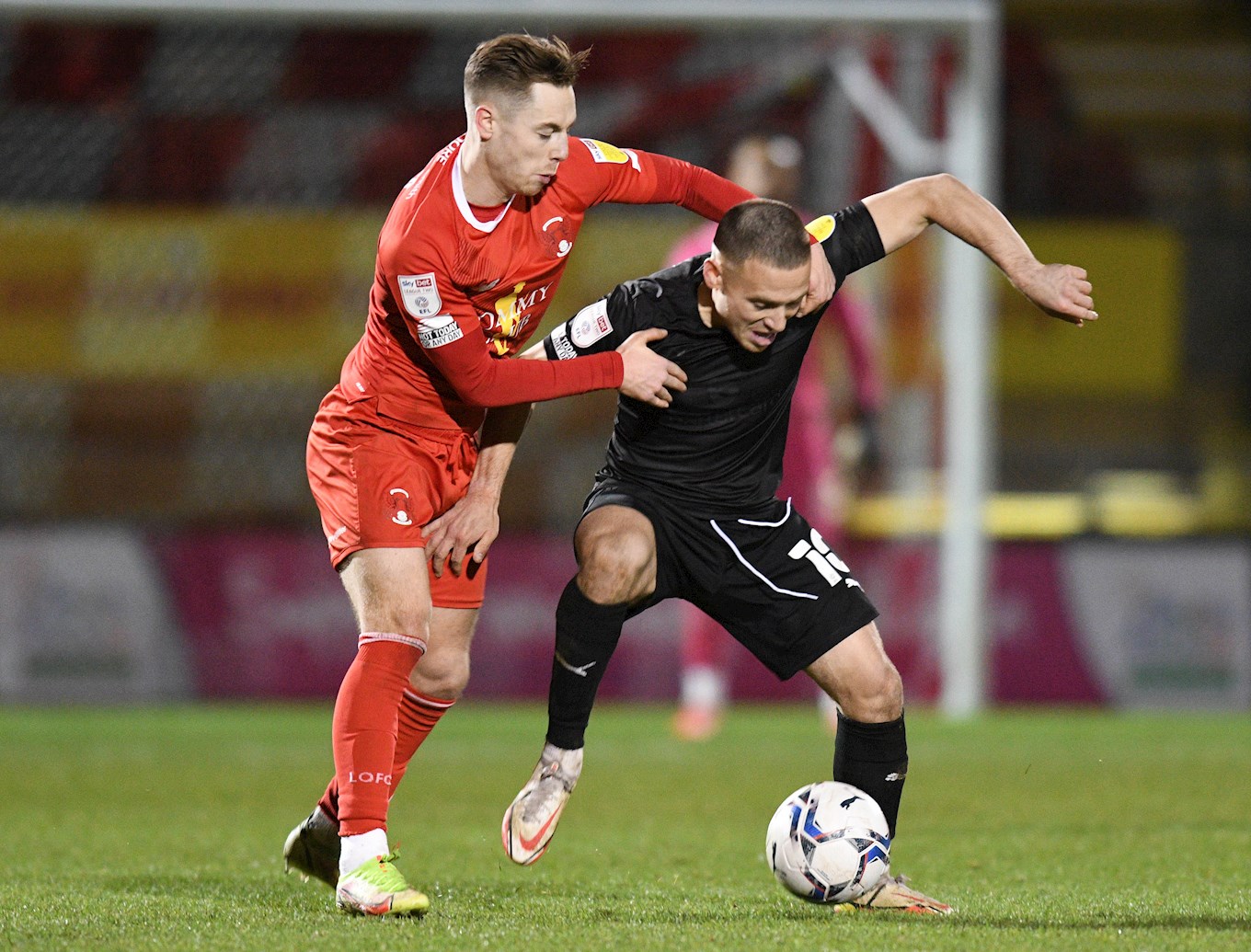 Tyreece Simpson then thudded a first-time effort wide of the far post, before Jonny Williams came on for Romoney Crichlow as Town looked for a way back into the game.

Jayden Mitchell-Lawson then replaced Harry McKirdy who was on a booking, but Orient went on to extend their lead thanks to Smith, who was on hand to nod home his second goal of the game from a rebound after Drinan's initial shot was parried by Wollacott.

And that proved to be that as Orient saw the rest of the game out with ease, with Town seeing their remarkable winning streak on the road come to an end on what was a frustrating night in London.


Swindon Town endured a rough night at the office after losing 4-1 to Leyton Orient at The Breyer Group Stadium on Tuesday night.


Swindon Town suffered a tough 4-1 loss at the hands of Leyton Orient in the EFL Sky Bet League Two on Tuesday night.

Swindon Town can now confirm ticket prices and details for our upcoming trip to Leyton Orient in the EFL Sky Bet League Two.

Ben Garner's team will head to The Breyer Group Stadium on Tuesday 7th December - 7:45pm Kick-Off - for a mouthwatering showdown.

Town have been allocated 1,200 tickets for this game, although please note that this is initial allocation only and we could be given further tickets in due course.

MATCHDAY TICKET PRICES (IF ANY REMAIN) 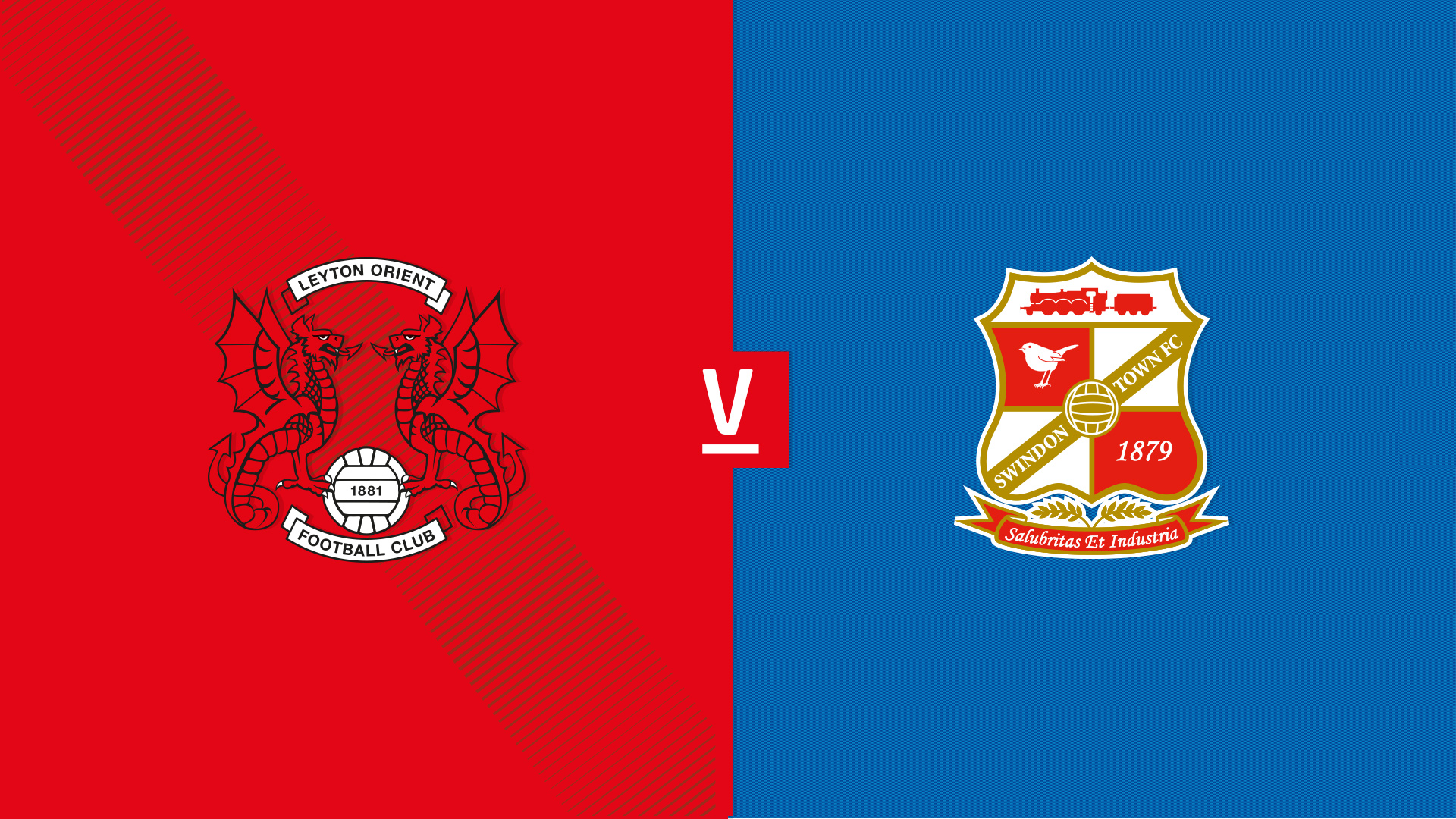 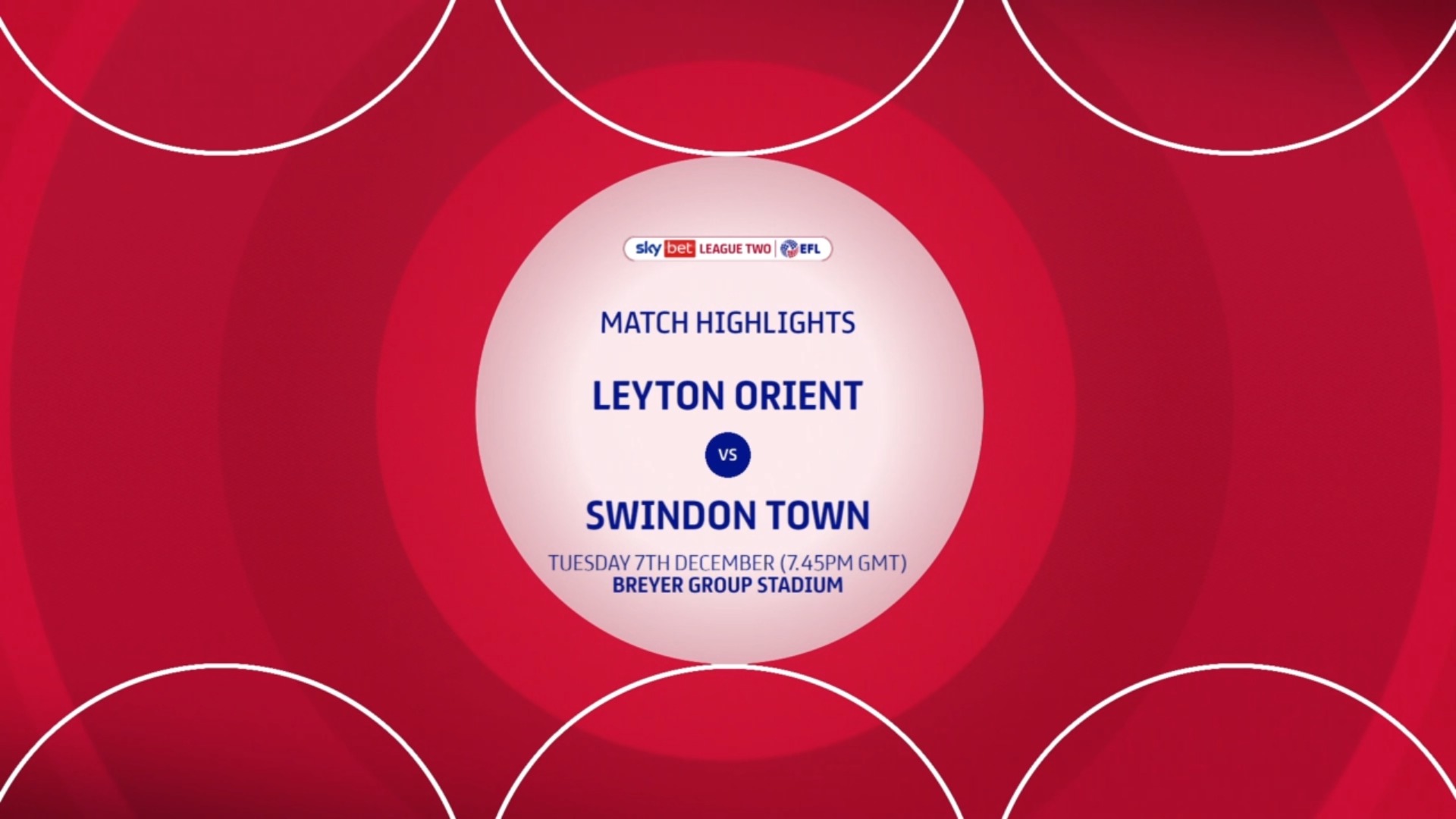 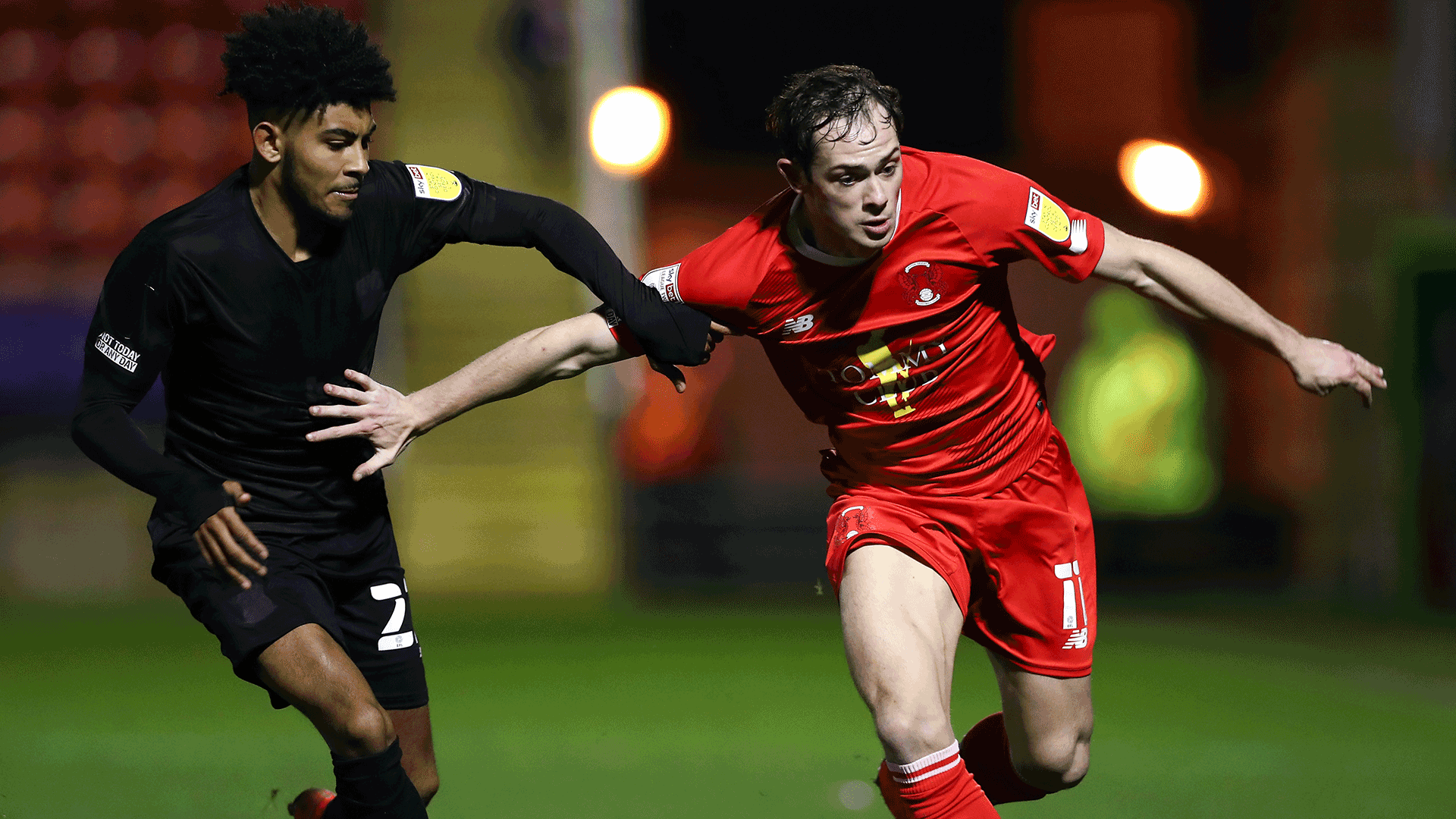