Swindon Town kick-off the New Year with a mouthwatering clash against Northampton Town at The County Ground in the EFL Sky Bet League Two this afternoon.

In what is the first game of 2022, the Reds will be looking for their first win of the New Year against a Cobblers team who were flying high prior to being hit by a COVID-19 outbreak.

This is a promotion clash that has all the makings for a fantastic game of football this afternoon, and we've got you all set for the game.

Tyreece Simpson was on target for Town while Fraser Horsfall scored a late equaliser as the two teams played out a 1-1 draw at Sixfields on September 18th 2021.

Town fans can buy tickets online up until half-time of today's game by clicking right HERE.

Town will be carrying out COVID checks prior to today's game with turnstiles opening at 1pm, so we urge all supporters to arrive as early as possible.

For more information on what you will need to do ahead of tonight, please take a read of our COVID Guide HERE.

Dion Conroy is suspended for one more game and Mathieu Baudry remains injured, but Town should have everyone back from COVID Protocol. 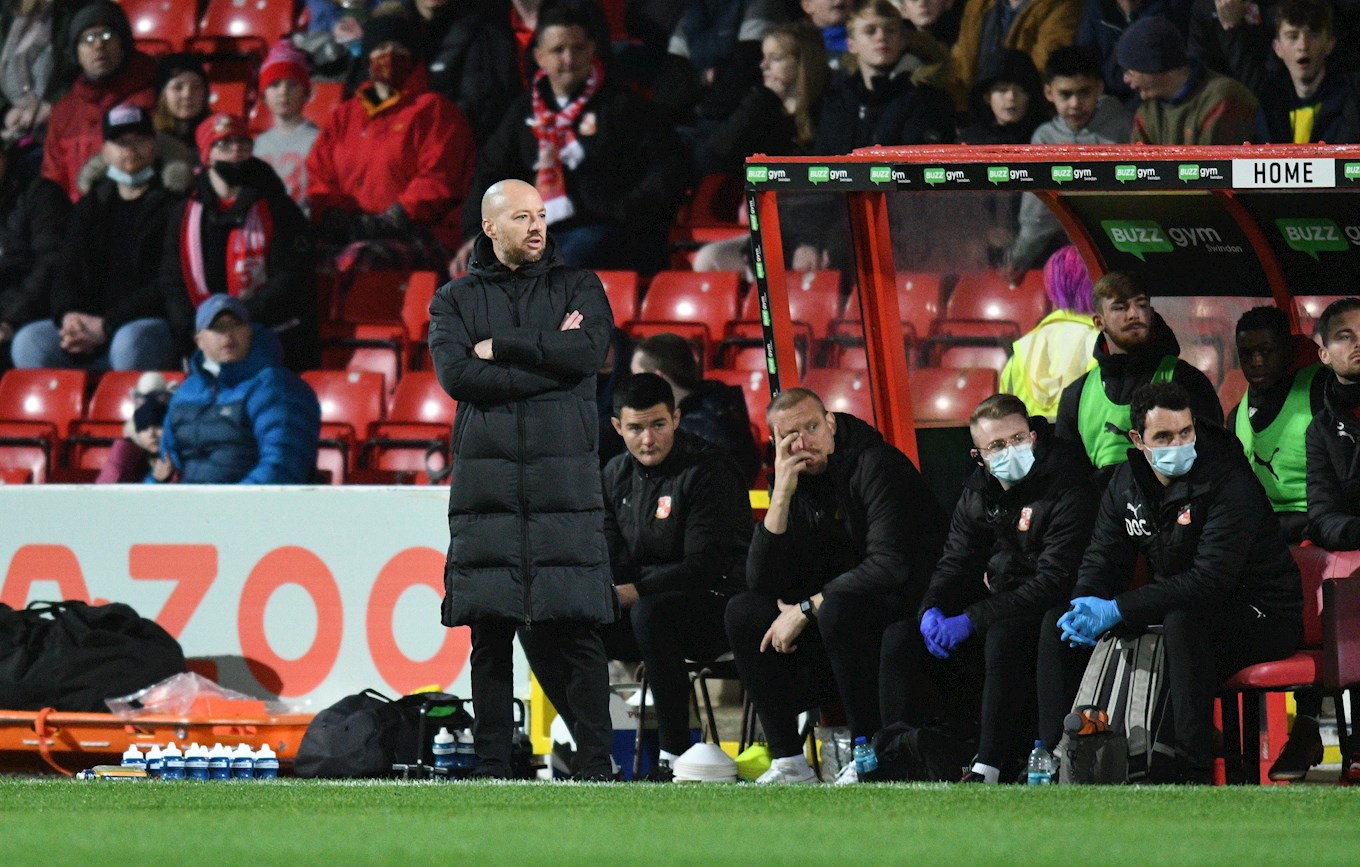 Ben Garner, Swindon Town Head Coach: "We will make some changes to the team and we've got to attack the game more against Northampton," Garner said.

"At home we want to play on the front foot, we want to create as much as we can and that will be our focus going into the game.

"Our focus has just got to be purely on us.

"We'll prepare for them as best as we can based on what we know and what we've seen previously, but let's make sure we get everything right in house, our preparation right and being in the best possible shape we can be."

Jon Brady, Northampton Town Manager: “We are trying to plan as best we can but you have to be flexible and adaptable.

“The group has been hit hard but we have to be resilient and try to push on.

“It has been a strange time and we are all chomping at the bit to get back to playing.

“The health and well being of the country is the most important thing and we are trying to support the EFL in what they are trying to do as best we can.”

Not at SN1 today? Don’t panic because there are numerous ways to keep up to date with all the action. 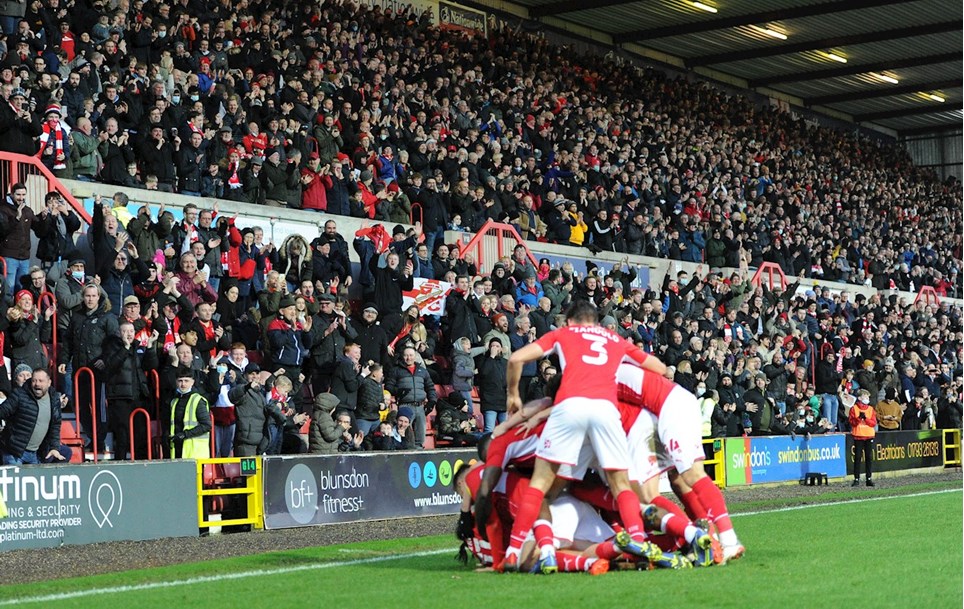 
Swindon Town produced an attacking feast for the ages with a 5-2 win over Northampton Town at The County Ground on New Year's Day. 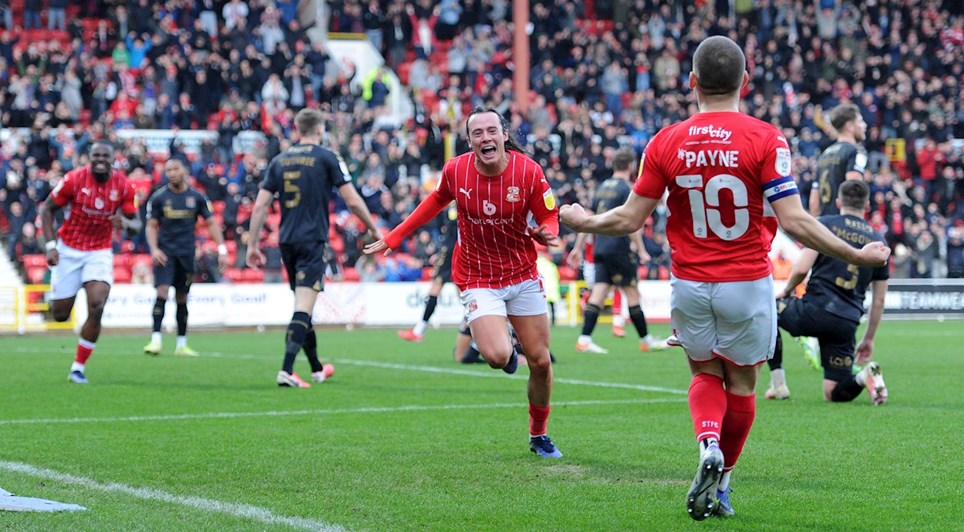 
Swindon Town got off to the perfect start in 2022 after beating Northampton Town 5-2 at The County Ground on New Year's Day. 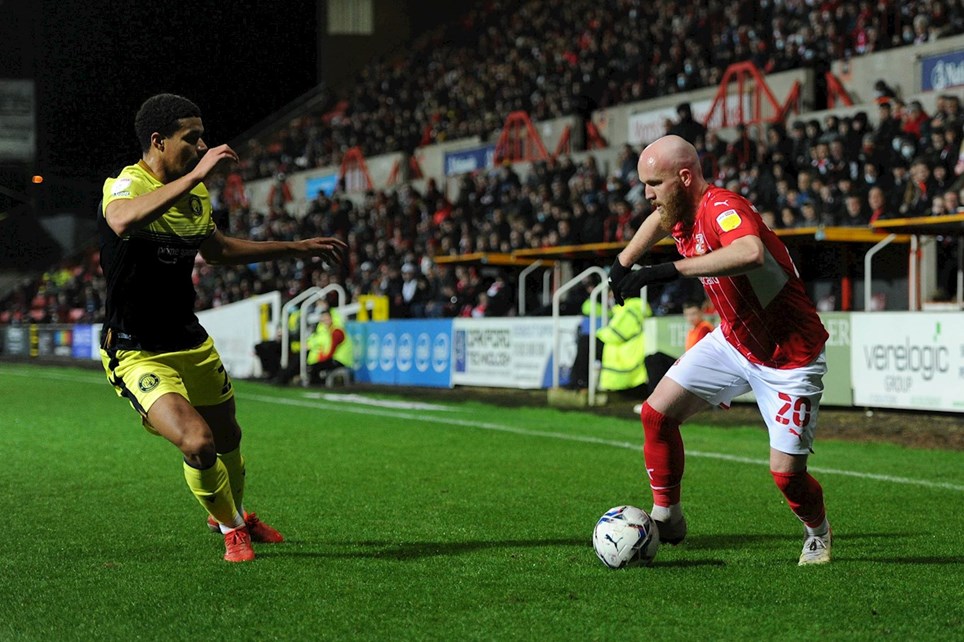 Swindon Town got off to a sublime start in 2022 after thrashing Northampton Town 5-2 in the EFL Sky Bet League Two at The County Ground on New Year's Day.

Harry McKirdy slammed home from close-range to give his team a well-deserved lead, but Sam Hoskins struck before the break to ensure the two teams went in level.

There was an offensive explosion in the second-half and three more goals from McKirdy, plus a superb effort from Tyreece Simpson, ensured Jon Guthrie's goal didn't matter and it spearheaded a stunning day at the office for the Reds.

Town Head Coach Ben Garner made three changes in total with Jordan Lyden, Jonny Williams and Tyreece Simpson all being restored to the Starting XI, while Ryan East, Ben Gladwin and Jayden Mitchell-Lawson dropped to the bench.

Garner wanted his team to start the game on the front foot and take the game to Northampton, and they certainly did that in the opening stages.

Kaine Kesler-Hayden played in Tyreece Simpson with a nice ball and the powerful No. 9 looked to curl an effort towards goal, but his shot went wide of the far post.

It was then Northampton's turn to attack as Danny Rose won the ball back before playing a pass back across goal and into the path of Mitch Pinnock, who saw his shot blocked before it was eventually gathered by Jojo Wollacott. 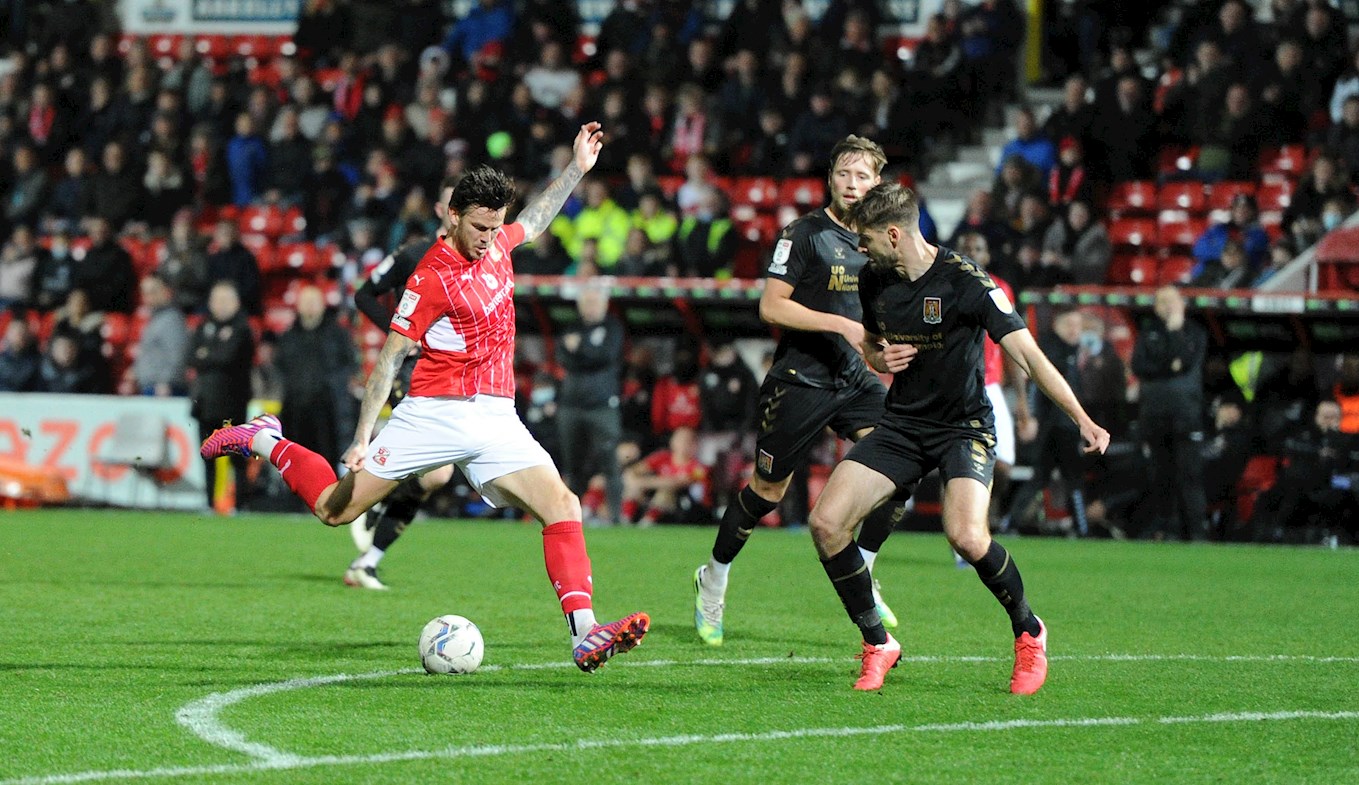 Wollacott did well to get down low and smother Jack Sowerby's strike from outside the box, before Simpson could only stab wide under pressure after being played in with a superb pass by Jordan Lyden.

Aaron McGowan headed over from a Sam Hoskins corner, while Harry McKirdy sent a well-struck first-time effort wide of the post at the other end with both teams attacking with a real intent early on.

Town were playing with a real purpose and a real swagger to their game going forward, and they threatened again with McKirdy's great ball across goal just evading the outstretched Kesler-Hayden.

And the Reds were fully rewarded just shy of the half-hour mark as Payne's cross was deflected into the path of McKirdy, who lashed a first-time effort into the back of the net.

Town kept their foot firmly on the gas as Louis Reed went close with a first-time effort that flew inches over the crossbar, although it was the visitors who struck next.

Northampton hit their hosts on the break as Shaun McWilliams found Hoskins with an excellent diagonal ball, and the striker did the rest by charging towards goal and beating Wollacott at the far post.

And the Cobblers nearly took the lead on the stroke of half-time thanks to Pinnock, who spotted Wollacott off his line and then decided to send a 50-yard free-kick towards goal, with Wollacott doing well to scramble back and tip it over the bar. 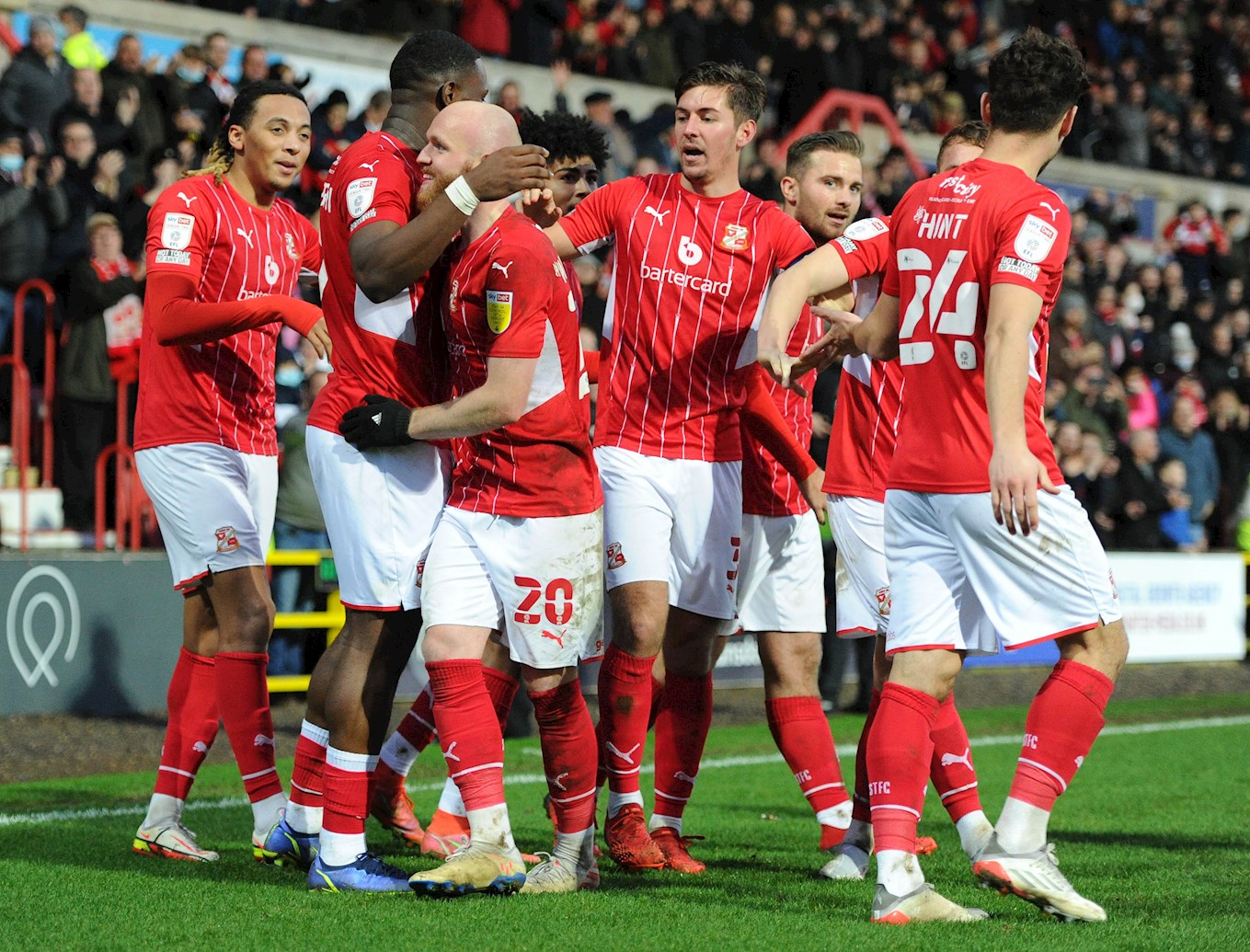 It was a crazy and frantic opening to the second-half as the goals came thick and fast in a chaotic ten-minute period, with Jon Guthrie stabbing home from a Mitch Pinnock free-kick after Town failed to defend the set-piece.

However, the Reds responded in superb fashion and they were soon level with McKirdy latching on to another loose ball inside the box before firing past Liam Roberts.

And, minutes later, McKirdy was at it again as another loose ball in the box resulted in our No. 11 completing his hat-trick, again latching onto a loose ball before stroking it in to the empty net. 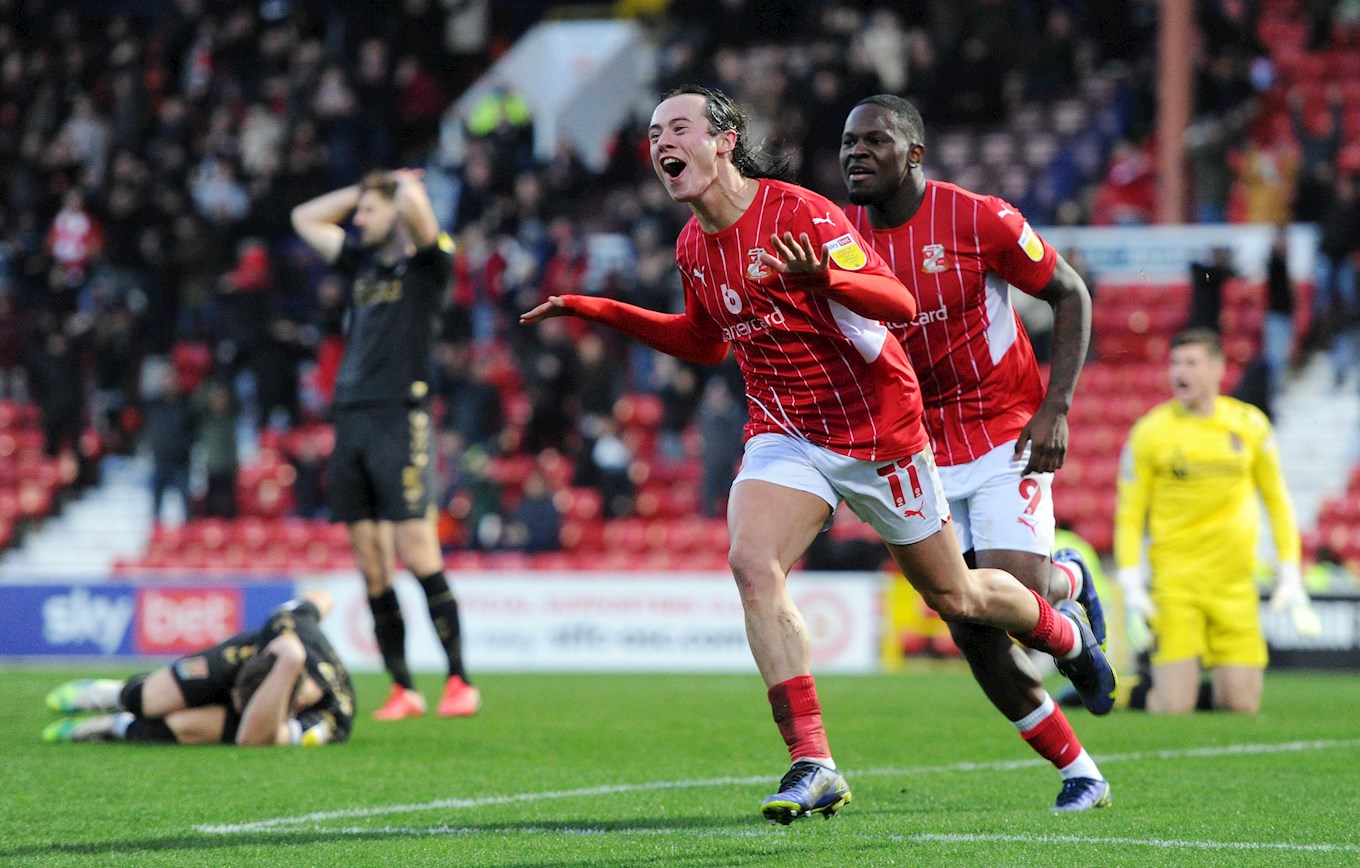 Romoney Crichlow then replaced the injured Jack Payne before Rob Hunt hit the post as Town continued to pile on the pressure on a shocked Northampton team, and they did add to their lead on the hour mark.

Reed split the defence down the middle with a sublime ball which Simpson held up, beating two men before moving to his right and lashing home an unstoppable strike for a well-deserved goal.

And the madness wasn't quite complete as that man McKirdy refused to stop scoring, this time volleying home the rebound after Liam Roberts had produced a superb save to tip Reed's free-kick on to the post.

With the Reds firmly in the driving seat, Jonny Williams made way for Ben Gladwin before more breathtaking attacking play got The County Ground crowd firmly on its feet. 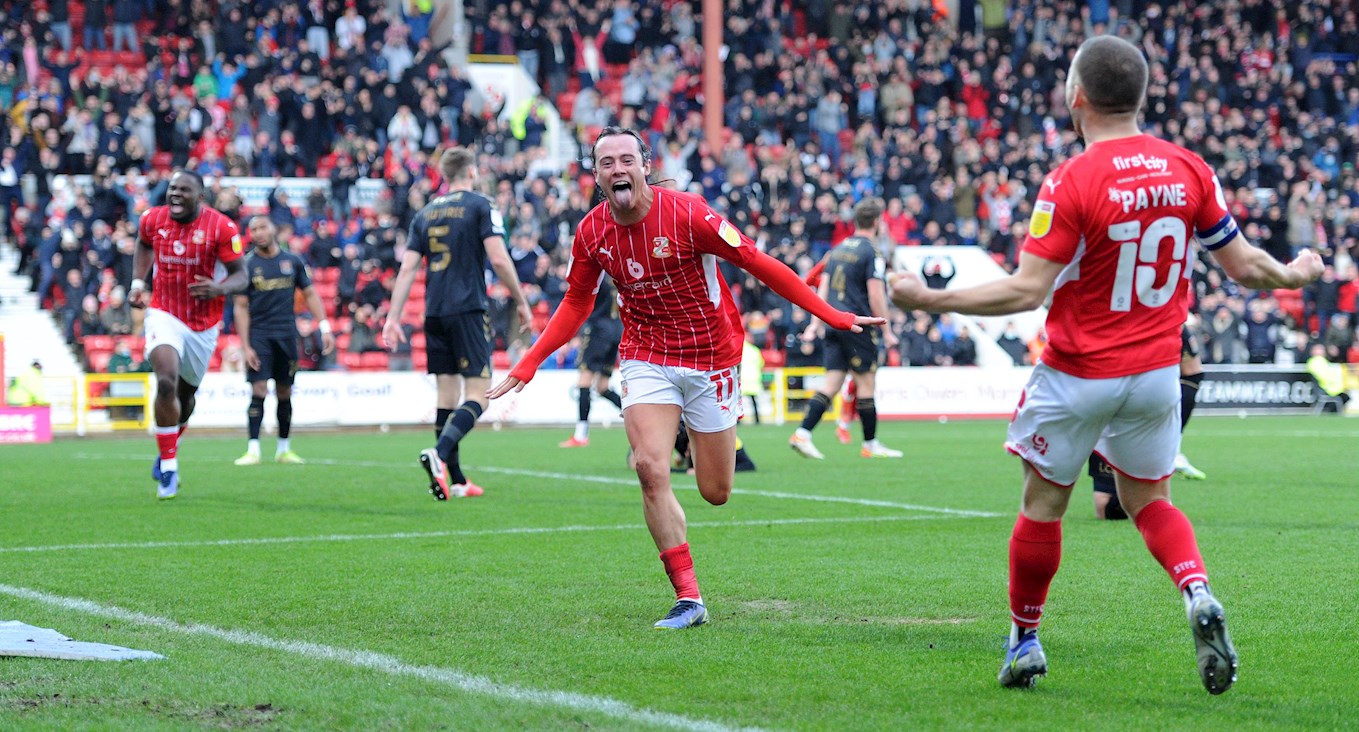 A stunning passage of play resulted in Ellis Iandolo playing in Simpson who hammered a shot against the post, before Lyden fired just over and McKirdy was denied a fifth by hitting the post with some help from Roberts after yet more champagne football by the hosts.

Louis Reed was replaced by Ryan East with 10 minutes left to play, and McKirdy went for five again after flashing a shot inches past the post with what proved to be the final action of the game as Town celebrated a vintage start to the New Year.


Swindon Town produced an attacking feast for the ages with a 5-2 win over Northampton Town at The County Ground on New Year's Day.


Swindon Town got off to the perfect start in 2022 after beating Northampton Town 5-2 at The County Ground on New Year's Day. 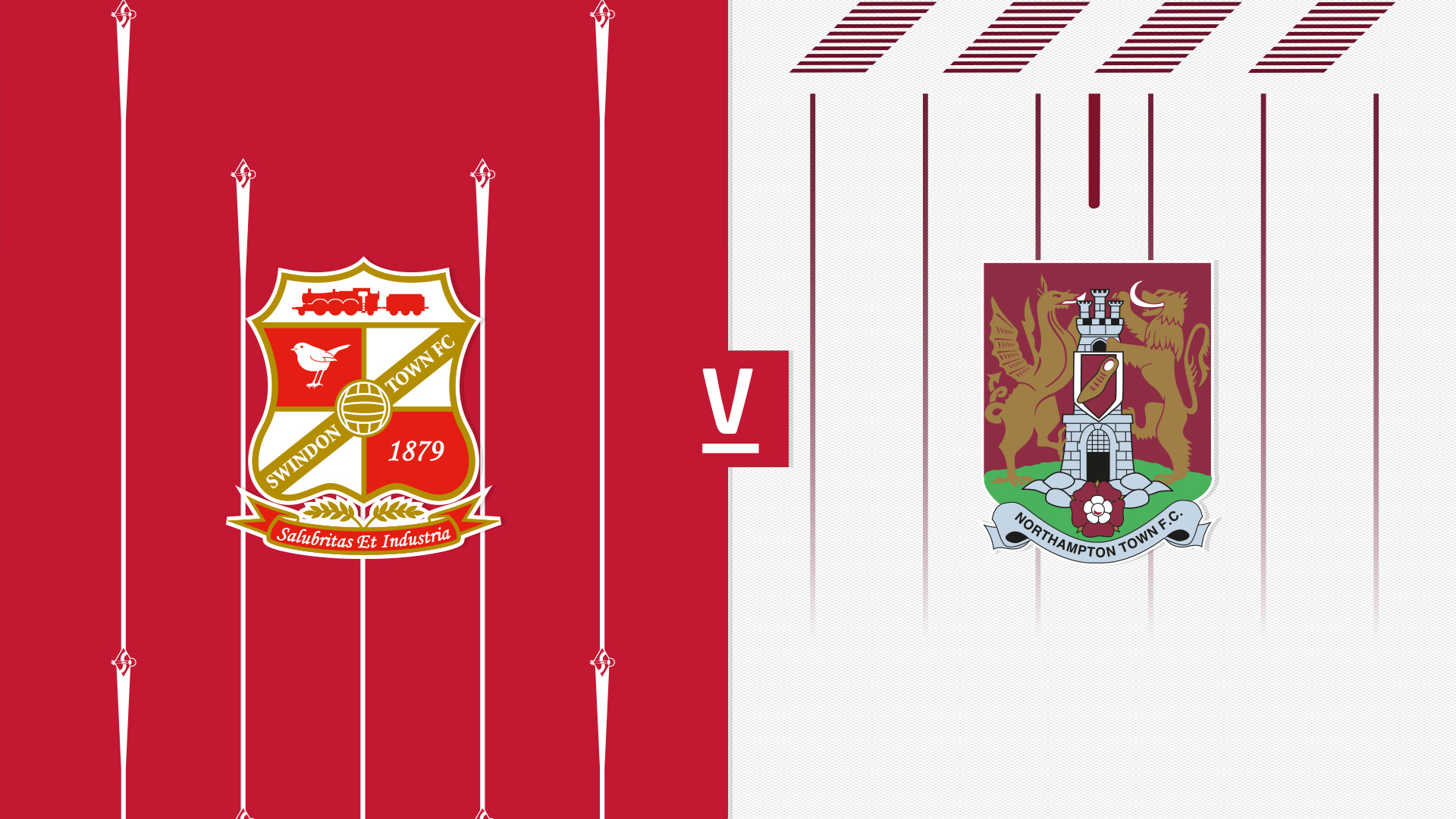 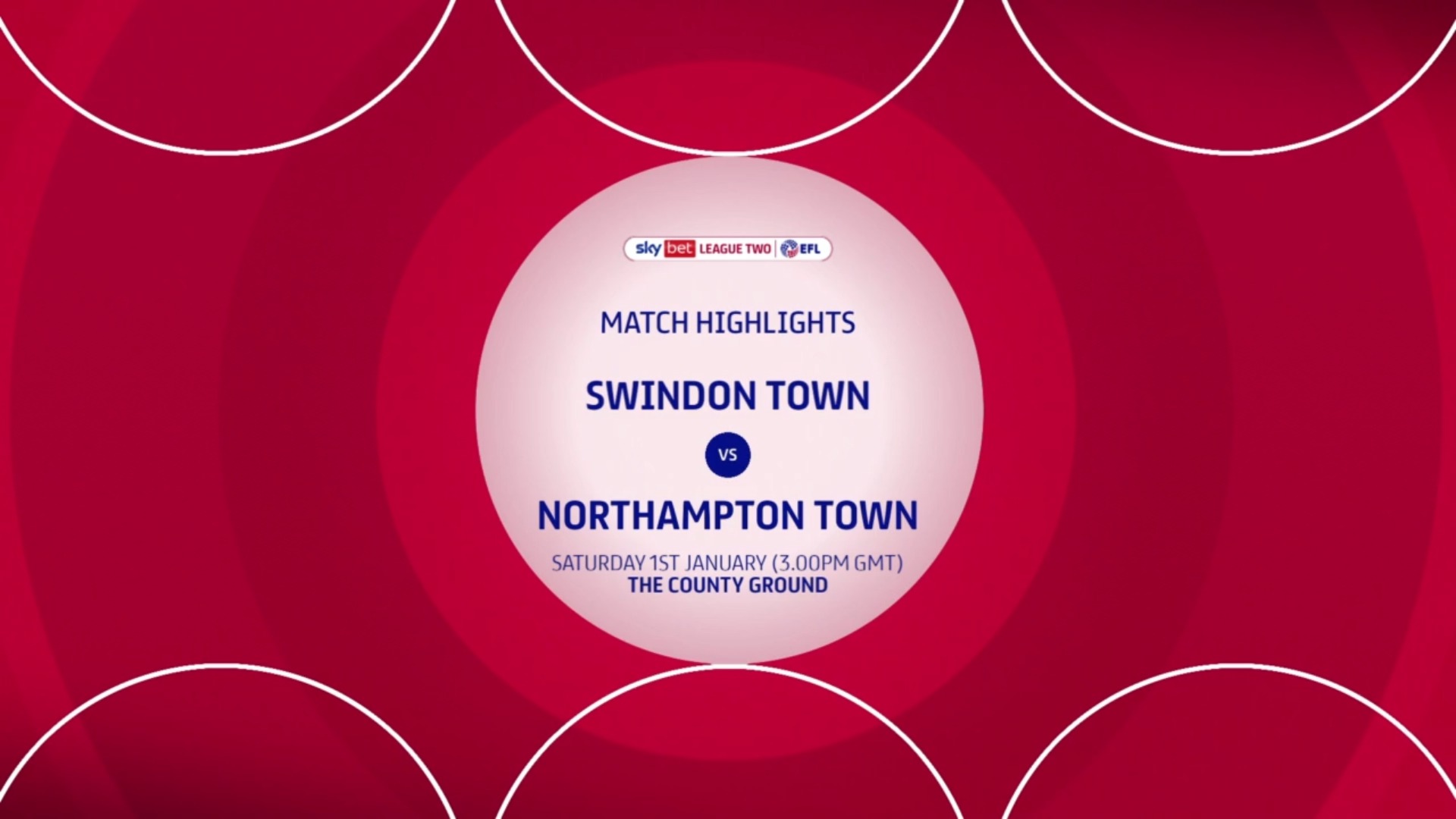 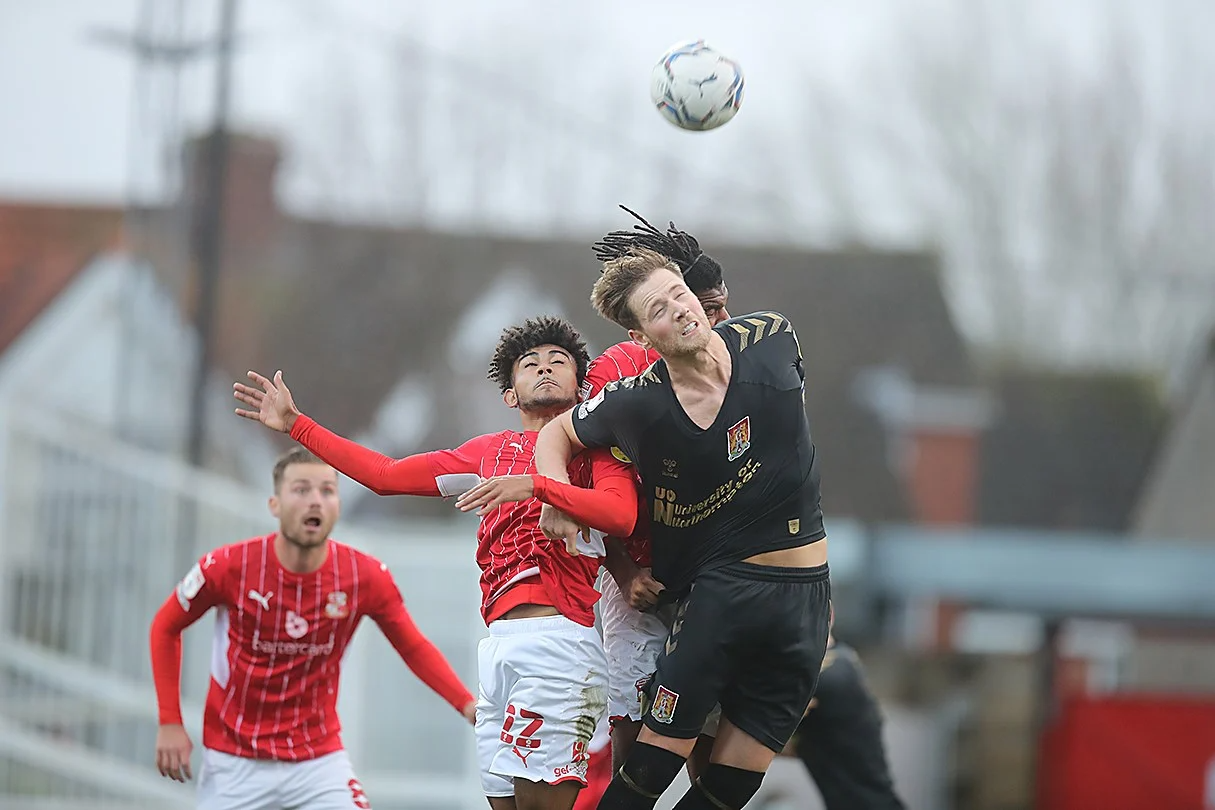