Swindon Town U18’s Boss Alan McLoughlin has declared himself thrilled with his side’s stunning start to the season.

The young Reds produced a classy display to record a 5-1 victory at home to Newport on Saturday and make it four wins on the bounce in the EFL Youth Alliance South West League.

A Sol Pryce brace coupled with an own goal and efforts from Jordan Edwards and Jacob Bancroft wrapped up the win for Town, who have now scored 16 goals in their opening four games.

And Macca was more than pleased with how his charges equipped themselves against last season’s Merit League winners, although he has warned his side against getting complacent.

“I am absolutely delighted with the boys. We had a very slow start at Exeter the week before, which we spoke about, and we were 2-0 up inside the opening five minutes on Saturday,” he told swindontownfc.co.uk.

“Like every football club there is a turnaround of players and that was certainly evident with Newport, they weren’t as strong as they were at the end of last season but I’m sure that is something Byron Moore will be working on throughout the course of the year.

“They did cause us some problems but we were by far the better side over the 90 minutes and I don’t think Newport will have any complaints with us winning the game.

“I was delighted with the application, the effort, the commitment and the quality from the boys from the very first minute right through until when the game finished and it was a very good contest.

“Joe Romanski got injured unfortunately on Thursday and he’s been a key player for us this season, but he shouldn’t be too long. 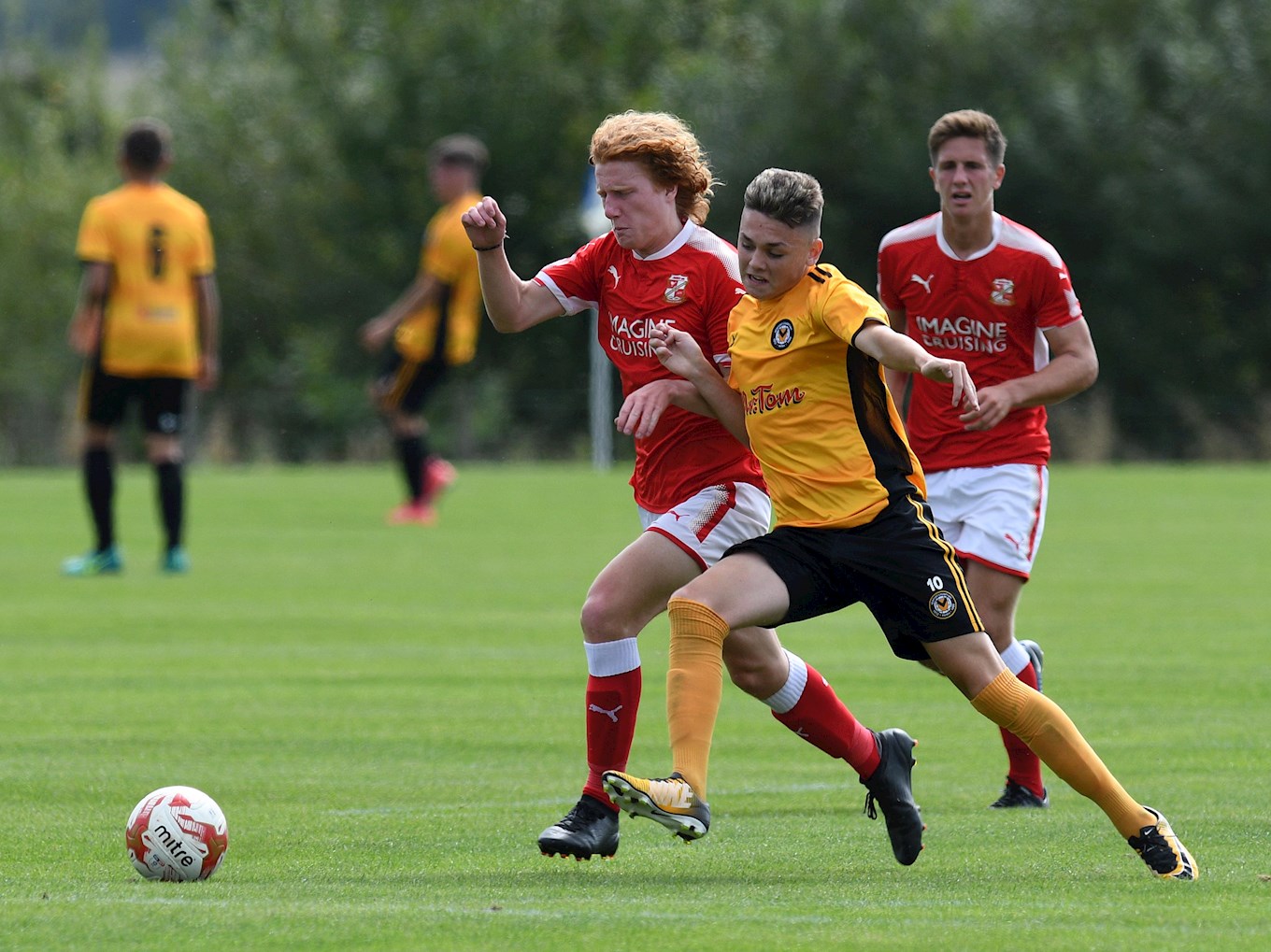 “Luke Haines stepped in for us at centre-back and he was magnificent. He played really well in a different position and produced a fantastic performance.

“Myself and Jeremy Newton were delighted with the quality that we produced and we mixed our game up.

“We not only controlled the game well at times and passed the ball well, we put the ball in behind and caused them problems.

“Overall, I’m delighted with our start to the season but it is only the start and we’re just four games in.

“We played nearly 50 games last year so it is a tiny percentage of what lies ahead, although I couldn’t be more delighted with the way things have gone so far.”

Town’s U18’s are currently thriving in a three at the back system although that will soon be changed to a four, and McLoughlin went on to explain the benefits of chopping and changing formations.

“We are currently running with a three at the back and we’ll play that for another three weeks before changing formation,” he added.

“I was delighted with the application, the effort, the commitment and the quality from the boys from the very first minute right through until when the game finished and it was a very good contest."

“It is something we do in the Academy and even if we’re doing very well we’ll change the formation because it is an educational vehicle for the boys to understand how to play in a three.

“This current system is a good system for the players we’ve got and it was at the end of last season, but we’ll tear it up and we’ll go to a four and play a different formation because it is important and it is about the players developing.

“It is important for their development that they are capable and able to play in a three, then a four and different formations.

“Having said that, we still like to win football matches and that’s exactly what we are doing at the moment.”