Luke Norris was thrilled to make an instant impact upon his return from injury on Saturday.

The frontman was introduced at half-time during the 1-1 draw with Exeter City despite seeing his shoulder pop out just a week before.

And he showed no signs of that injury holding him back as he produced a sublime ball for Kaiyne Woolery to latch onto and notch the equalising goal.

Norris is now looking to kick-on as he aims to continue both his and the Reds’ encouraging start to the new season.

“If you told us that we would take four points from our opening two games against teams that were in the Play-Offs last season, then I think a few people would have taken that,” he told swindontownfc.co.uk exclusively.

“We want to win every game always so we would have taken six points from a possible six but it was really nice to come on at half-time on Saturday when we were 1-0 down and be involved in changing the game.

“It was nice to get an assist and it came from Loz’s (Lawrence Vigouroux) kicking to Broph (James Brophy) finally winning a header and Kaiyne (Woolery) made the run so I put him through and he did the rest. 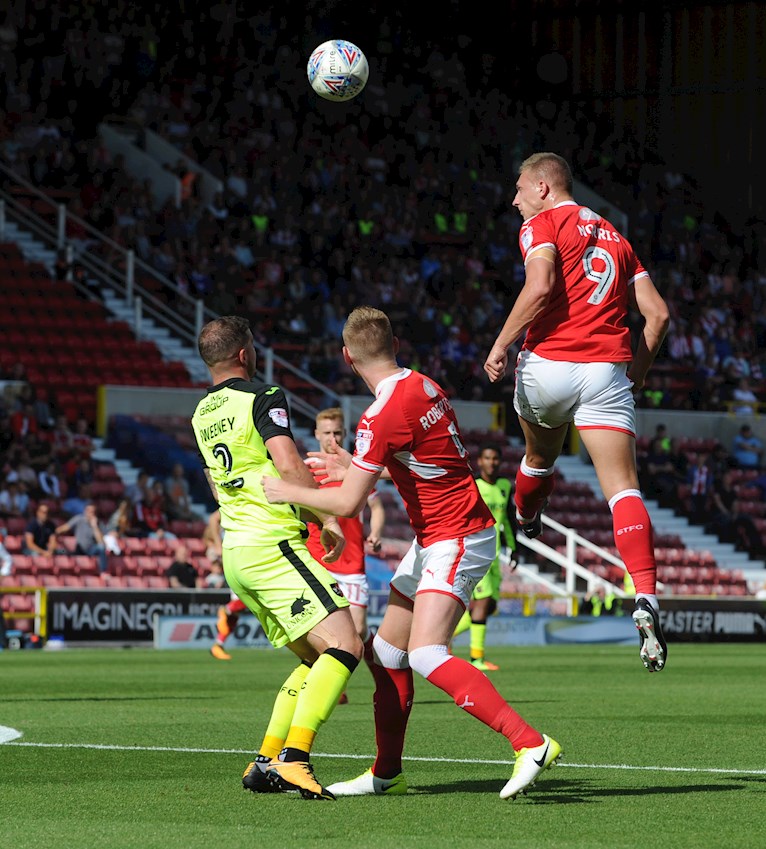 “We had a real tough pre-season in the summer and it has got everyone into top shape.

“It has made me feel better and when you feel fit you feel good and that leads you to playing well, so hopefully I can keep that going, stay fit and keep my current performances going.”

Norris wasted little time in opening his account for the season after netting just thirty-minutes into the 2-1 win against Carlisle United two weeks ago, and the striker was delighted to have made a flying start to the 2017/18 campaign despite being forced off with an injury just moments later.

“It was disappointing to come off in the first game after I’ve worked so hard during pre-season to get myself up to the standard required,” he added.

“I started so well and managed to score half-an-hour into the game and you think from there you can kick-on and maybe get a few more goals, so it was disappointing to have to go off.

“Luckily enough it isn’t anything that has affected me dramatically.

“I was pleased to score on the opening day and the first goal of the new season is always the hardest one, so to get that out of the way so early was great and it was a really good feeling.

“To top it off we went on to win the game and that was the most important thing.”

“I was pleased to score on the opening day and the first goal of the new season is always the hardest one, so to get that out of the way so early was great and it was a really good feeling."

Norris has partnered both Paul Mullin and Kaiyne Woolery up-front so far this season, and he’s been impressed by the former in particular.

“We’ve got some good competition now,” he continued.

“Mulls is a very good and very energetic player and he’s got two goals already and he’s not been playing as an out-and-out forward, so for him to get two goals at this stage is very good.

“He was asked to go out wide on Saturday at half-time and he was still very energetic, he kept getting on the ball and he kept causing problems, so he’s going to be a very big player for us this season.”