For the second game in a row the Reds suffered a slow start as Jamille Matt struck to reward the home side for a bright opening.

But Town fought back in fine style as Keshi Anderson restored parity with a brilliant strike, before a Matty Taylor free-kick was deflected into the back of the net by a home player.

However, Grimsby gave their hosts a taste of their own medicine after the break as they turned the game on its head once more with strikes from Siriki Dembele and Mitch Rose winning them the game.

Dave Flitcroft made two changes as Kellan Gordon and Kaiyne Woolery both returned to the Starting XI following their impressive cameos against Yeovil at the weekend, with Luke Norris dropping to the bench and Timi Elsnik missing out through injury.

Harry Smith led the line in a 4-2-3-1 formation for the visitors, who were only able to name five subs due to being hit with a few injuries.

Town were full of confidence heading into the game having carved out a seven-game unbeaten run, with six of those victories, but they had to endure an early scare with Reice Charles-Cook doing superbly to push away a powerful Siriki Dembele header.

It was soon the visitor's turn to attack but they were unable to make it count with Matt Preston heading over from Matty Taylor's trademark delivery from a corner.

And that miss would come back to haunt Swindon as Grimsby landed the first blow of the night with just eleven minutes on the clock.

Sam Jones embarked on a determined run before slipping in Jamille Matt who was able to get past Preston before tucking home into the bottom corner.

Gordon could then only skew a shot wide as the Mariners continued to control the opening exchanges of the contest.

Town then survived another scare as a free-kick was played short to Dembele and his cross was met by Danny Collins, who could only aim his volley straight at Charles-Cook.

And that miss proved to be the spark that woke the Reds up as they completely turned the game on its head within a matter of minutes.

Keshi Anderson picked up the ball in space before hammering home an outstanding strike from all of 30-yards out, before Taylor saw his free-kick bounce off a def and into the bottom corner just minutes later.

It was a superb turnaround by Flitcroft's men but they had to be on their guard against a dangerous Grimsby outfit, who went close again with Matt seeing his header kept out by Charles-Cook before Diallang Jaiyesimi lashed over on the rebound. 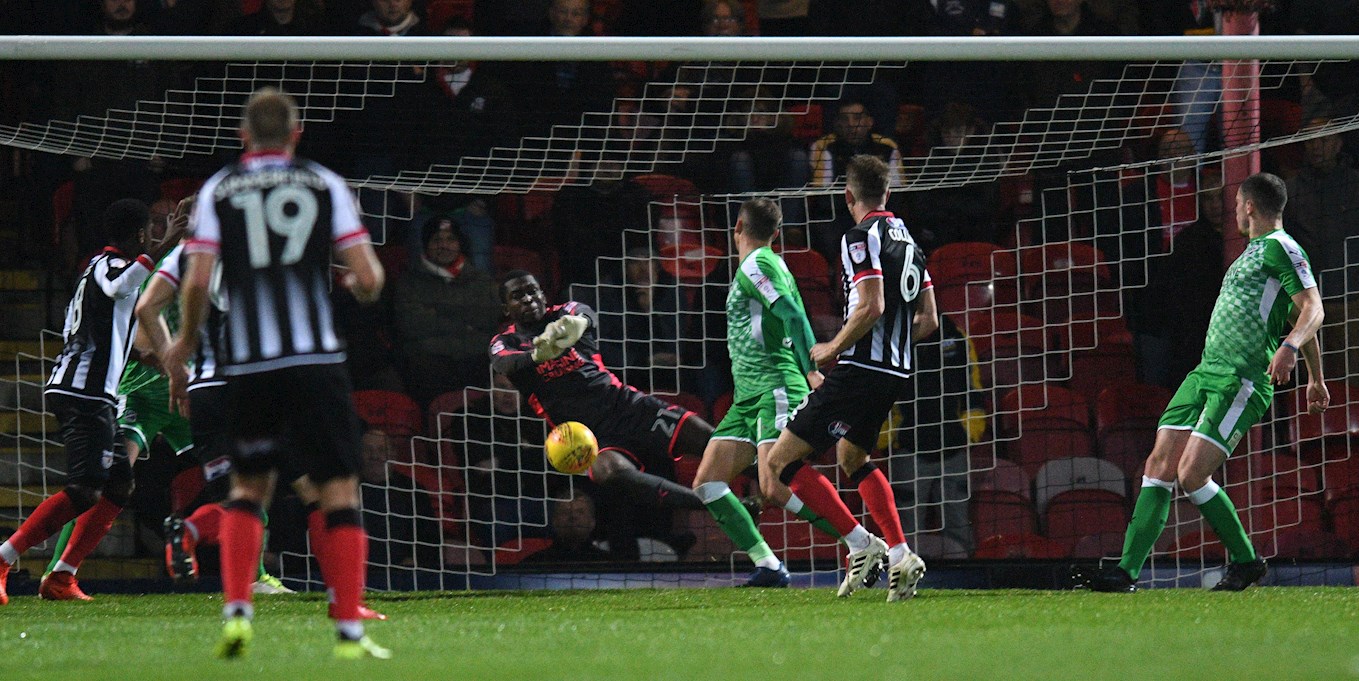 Jones was way off-target with an effort for the home side as the half drew to a close, before Taylor fired wide from a free-kick at the other end.

There was to be one final chance of an action packed first 45-minutes and it went the way of Grimsby as Luke Summerfield saw his fierce free-kick tipped over the bar by the impressive Charles-Cook.

Town nearly made it 3-1 straight after the restart as they broke with pace from a corner, but John Goddard could only fire wide after appearing to be pulled down inside the area, with any penalty appeals swiftly waved away.

Jaiyesimi sliced an effort miles wide with clear-cut chances few and far between in a tame second-half.

Grimsby were beginning to throw everything they had at their guests in the closing stages and they went close as Jones turned before firing a decent effort inches wide.

And the Mariner's pressure eventually paid off as Dembele was picked out at the back post by Jaiyesimi, and he was able to slam home the equaliser.

The search was then on for the winner and Town went close with Taylor seeing his free-kick punched clear by James McKeown, before a change was made as Ellis Iandolo replaced Gordon.

Jones stabbed wide from a superb Summerfield ball into the box although the offside flag was up, before Preston saw his bullet header clawed away by McKeown at the other end.

But it was Grimsby who succeeded in clinching a winner and all three points as Mitch Rose slammed home in the dying minutes to end Town's unbeaten run.