Luke Norris scored in the dying seconds to rescue a share of the spoils for Swindon Town in a 2-2 draw with Chesterfield at The Energy Check County Ground this afternoon.

There were no goals in the opening 45-minutes but there were plenty of talking points with the hosts losing two players to early injuries, while both sides had penalty appeals turned down.

Timi Elsnik made sure that Town got off to a flyer after the interval though, but that joy was short-lived with a Kristian Dennis effort and an outstanding strike from Jak McCourt putting the visitors on course for all three points.

However, there was to be some late drama as Norris was brought down inside the area by Jerome Binnom-Williams, and the striker was able to dust himself off and convert the resulting penalty to secure his side a deserved point.

Town opted to make two changes from the side that beat Dartford last weekend with Kaiyne Woolery and Keshi Anderson both coming into the fold, while Paul Mullin dropped to the bench and Donal McDermott missed out through injury.

The Reds, once again lining up in a 4-3-3 formation, were looking to make it six wins on the bounce but they were dealt an early blow with Amine Linganzi forced off with an injury. 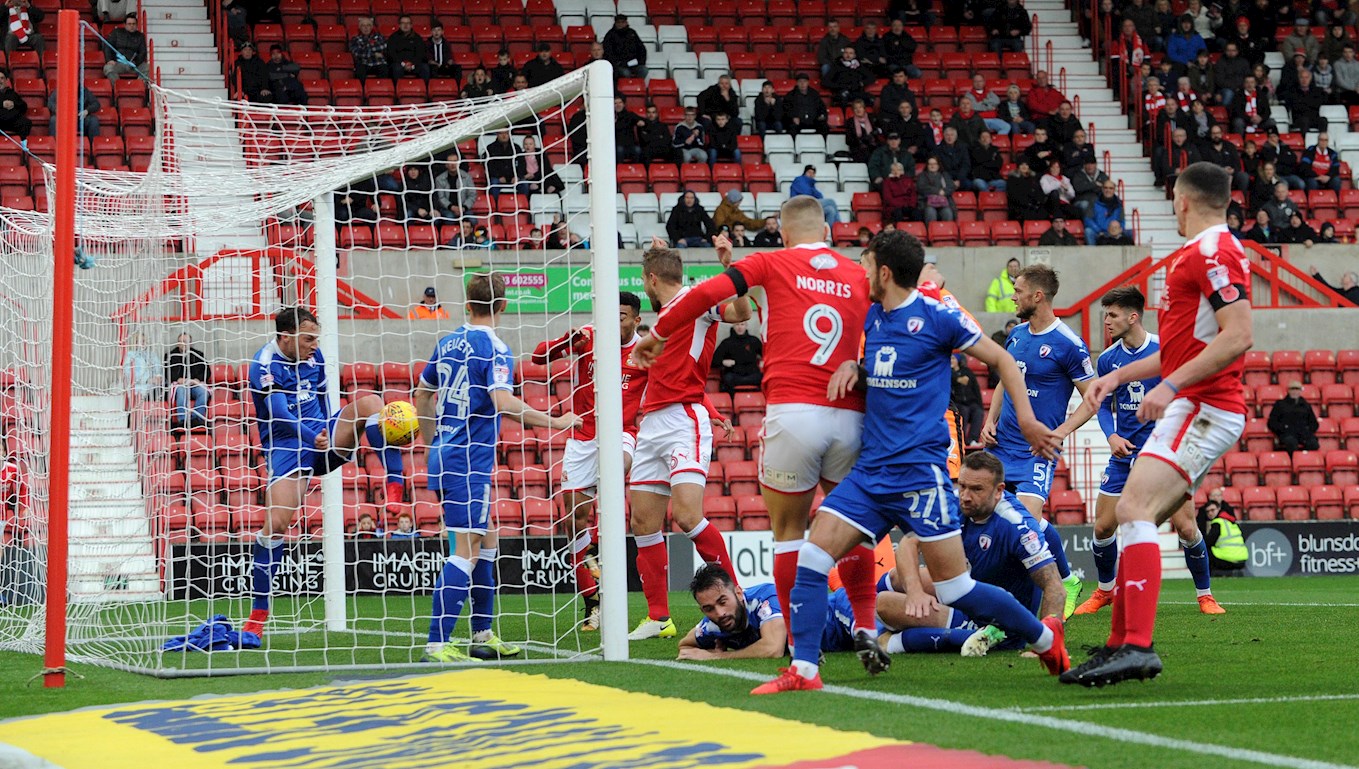 John Goddard was his replacement and he nearly made an instant impact as his 30-yard drive forced Joe Anyon into a superb stop.

There was soon another opportunity with Woolery doing well to close down Anyon and the ball bounced off the pair and towards goal, but the visiting defence were able to clear with the referee also waving play on despite there being a pull-back on Woolery.

Harry Smith was then picked out by a Ben Purkiss cross but he could only send a header straight at Anyon, before Kristian Dennis flicked a header wide at the other end following good play between Louis Reed and Joe Rowley.

Town were doing all the early running and they were getting closer with Anderson beating Anyon to a bouncing ball, although he couldn't get enough power on his effort and it went out of play.

Dave Flitcroft was forced to make another change bang on the half-hour mark though, with Harry Smith having to come off because of a head injury following a collision with Sam Hird.

That meant a welcome return to action for leading scorer Luke Norris and he nearly marked his comeback in style, but his looping header from Matt Taylor's corner was cleared off the line by Dennis.

Town were continuing to knock on the door but they were being kept at bay with both Matt Preston and Norris flicking headers wide.

Swindon finally made the breakthrough after the break though as they made the perfect start to the second-half. 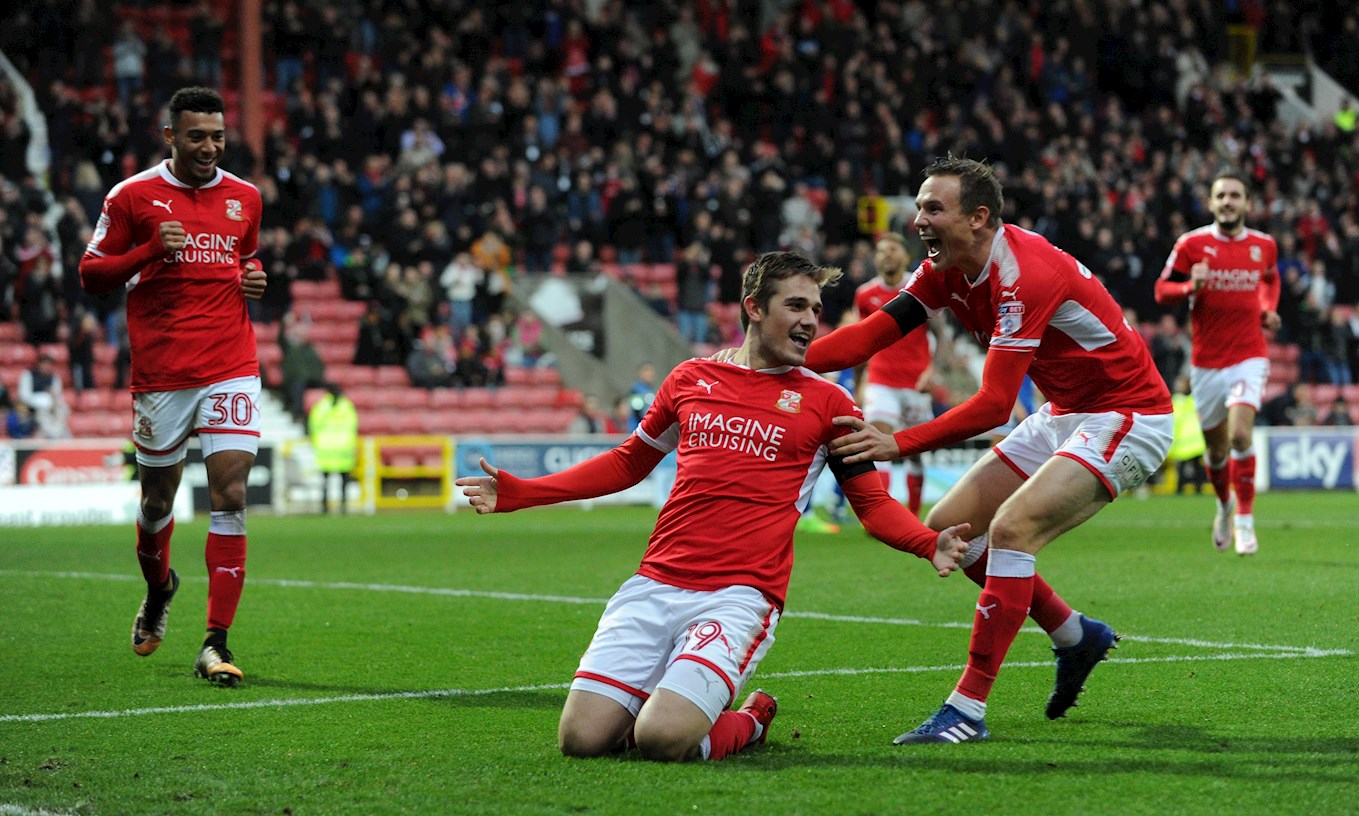 Timi Elsnik spun his man before hammering home a superb strike into the far corner to open the scoring in style.

Chesterfield nearly hit straight back however, although Dennis could only blaze a shot way over from close-range.

But Dennis was successful with his second attempt minutes later as he was played in by a superb Reed pass, before he kept his cool to tuck home beyond Reice Charles-Cook.

Jerome Binnom-Williams then sent a volley inches over the bar as the visitors began to enjoy a spell of pressure, before Norris could only nod over at the other end.

Charles-Cook had to be alert to parry a Joe Rowley drive, which prompted Town to make a change as Paul Mullin replaced Woolery.

It appeared to do the trick as Anderson flicked a header back across goal from Goddard's cross, but that missed opportunity would come back to haunt the hosts. 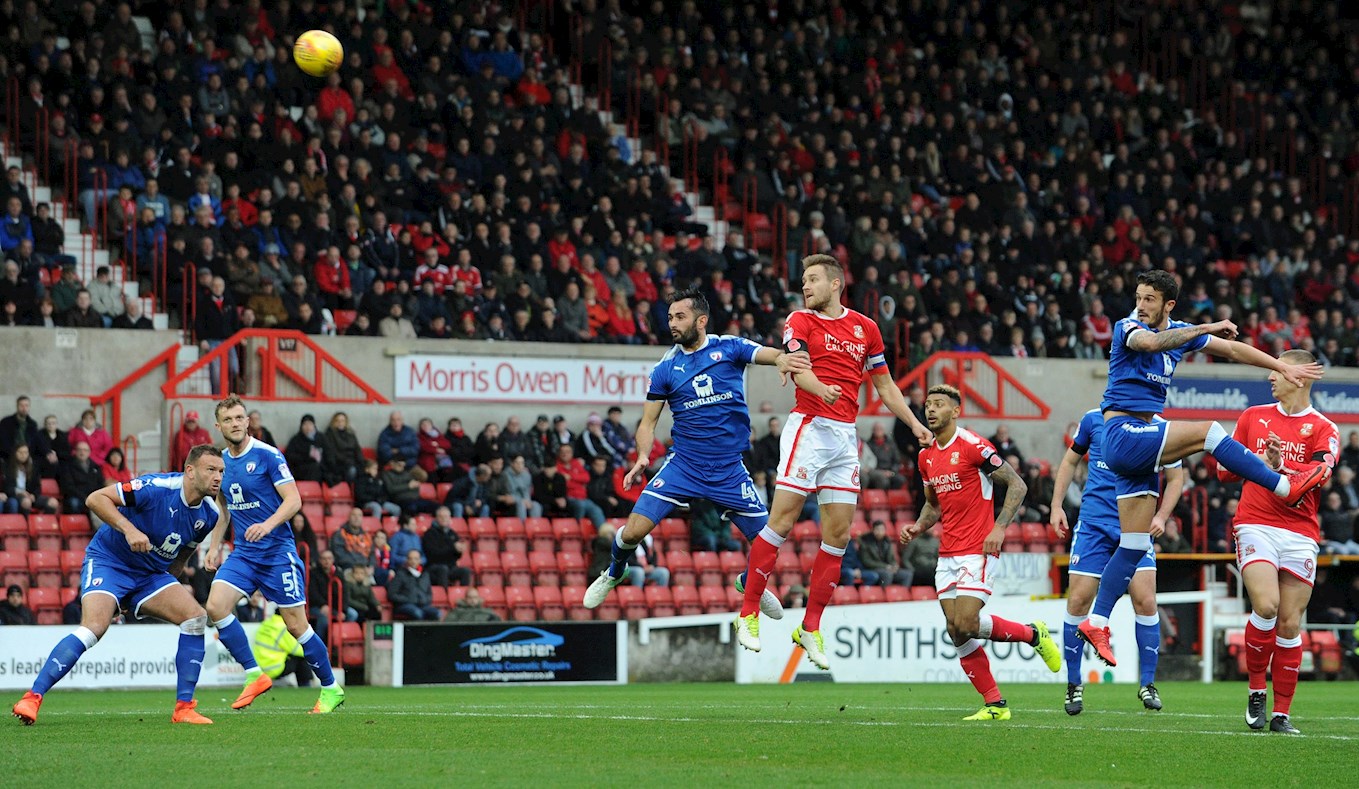 Reed laid the ball off to Jak McCourt and the midfielder was able to beat Charles-Cook with a stunning effort from 35-yards out.

Town were trying their best to salvage something from the game with Taylor and Anderson seeing shots blocked, although they were nearly done with a sucker-punch as Andy Kellett burst into the box before thumping a shot inches wide.

Swindon were heaping the pressure on in the closing stages with Taylor seeing his drive tipped wide by Anyon, but their perseverance finally paid off with the last kick of the game as Norris scored from the penalty spot after being fouled by Binnom-Williams to ensure Town's unbeaten run was maintained.