Swindon Town came from behind to beat Yeovil Town 2-1 in the Sky Bet League Two at Huish Park this afternoon.

Rhys Browne got The Glovers off to a flying start with an early strike and that proved to be the difference at the break, despite the Reds creating a whole host of clear-cut chances.

Town looked far more dangerous after the interval too and they were finally able to make their pressure pay past the hour mark when Kellan Gordon finished from close-range, before Keshi Anderson struck late on to wrap up a well-deserved victory.

Dave Flitcroft made two changes from the side that were held to a 2-2 draw by Chesterfield last time out, with Kaiyne Woolery dropping to the bench and Amine Linganzi missing out through injury.

John Goddard was restored to the Starting XI as was Luke Norris, who scored upon his return to rescue a point last week, and he formed part of a three-pronged attack alongside Harry Smith and Keshi Anderson in a 4-3-3 formation.

Town went into the game looking to stretch their unbeaten run to seven straight games, but they found themselves a goal down with less than five minutes on the clock.

Rhys Browne was able to seize possession out wide before cutting in and tucking home at the near post to give the hosts a dream start.

Swindon did try to muster up an immediate response as James Dunne was able to pick out Norris inside the area with a cross, but the striker's cushioned header was straight at Artur Krysiak in the home goal. 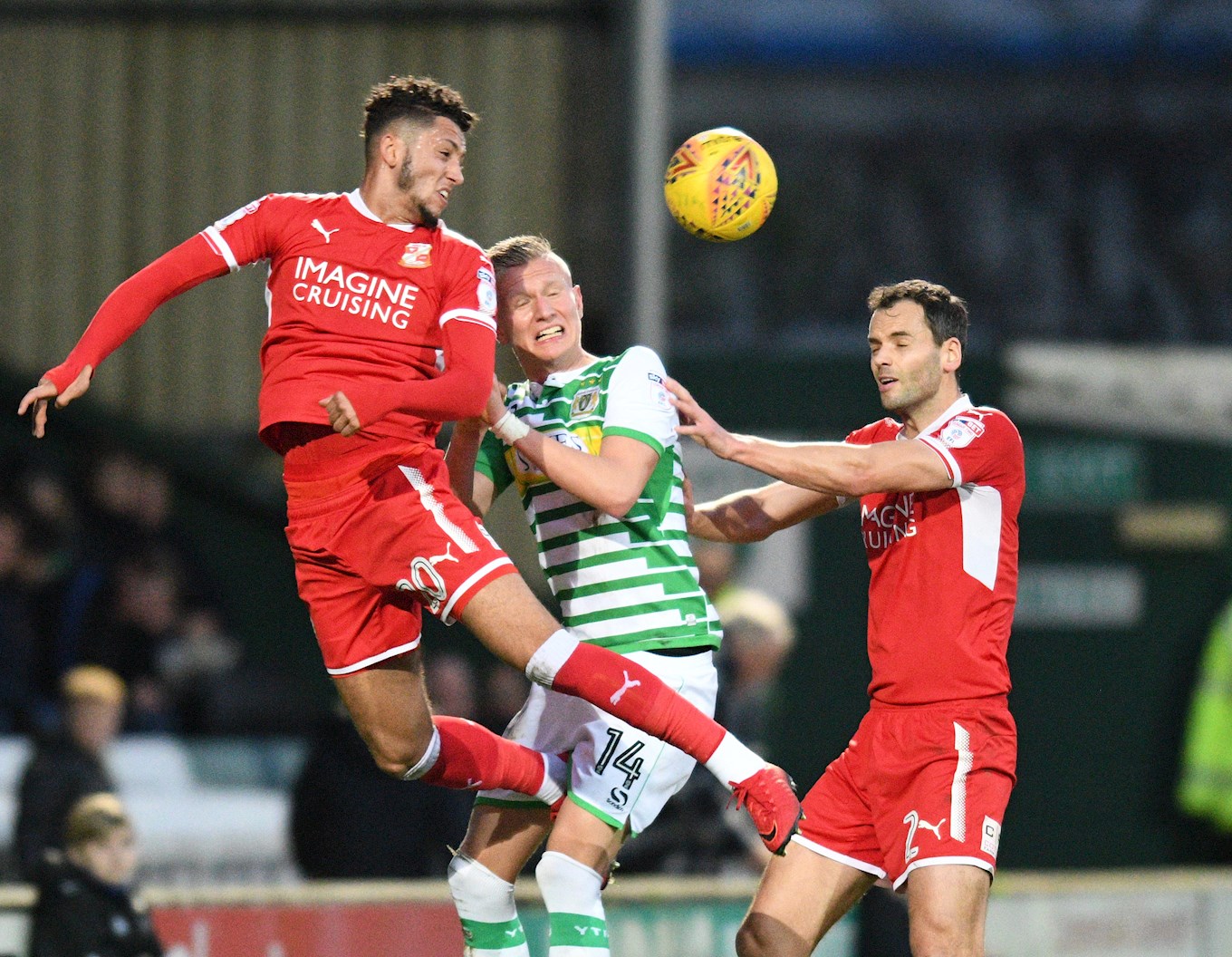 Matty Taylor then fired a free-kick straight into the wall before Tom James' set-piece at the other end dipped just over the bar from 30-yards.

The visitors were having to contain an energetic Glovers side but they were also creating openings too, although Taylor couldn't quite make the most of a counter-attack after seeing his low cross hacked clear.

Both sides were playing the game at a frantic pace and there was plenty of space for the two sides to exploit.

Town did just that as Taylor found Goddard who in turn opted to thread a nice pass into the path of Norris, but the Reds' leading scorer was robbed as he attempted to cut in and shoot.

And the visitors were beginning to dominate as they launched a wave of attack on the Yeovil goal, with Keshi Anderson drilling an effort inches wide before Timi Elsnik saw his point-blank strike deflected over the bar by James.

The chances kept on coming in a high-tempo half with Smith finding Norris in the middle with a pinpoint cross, but the striker could only glance a header wide. 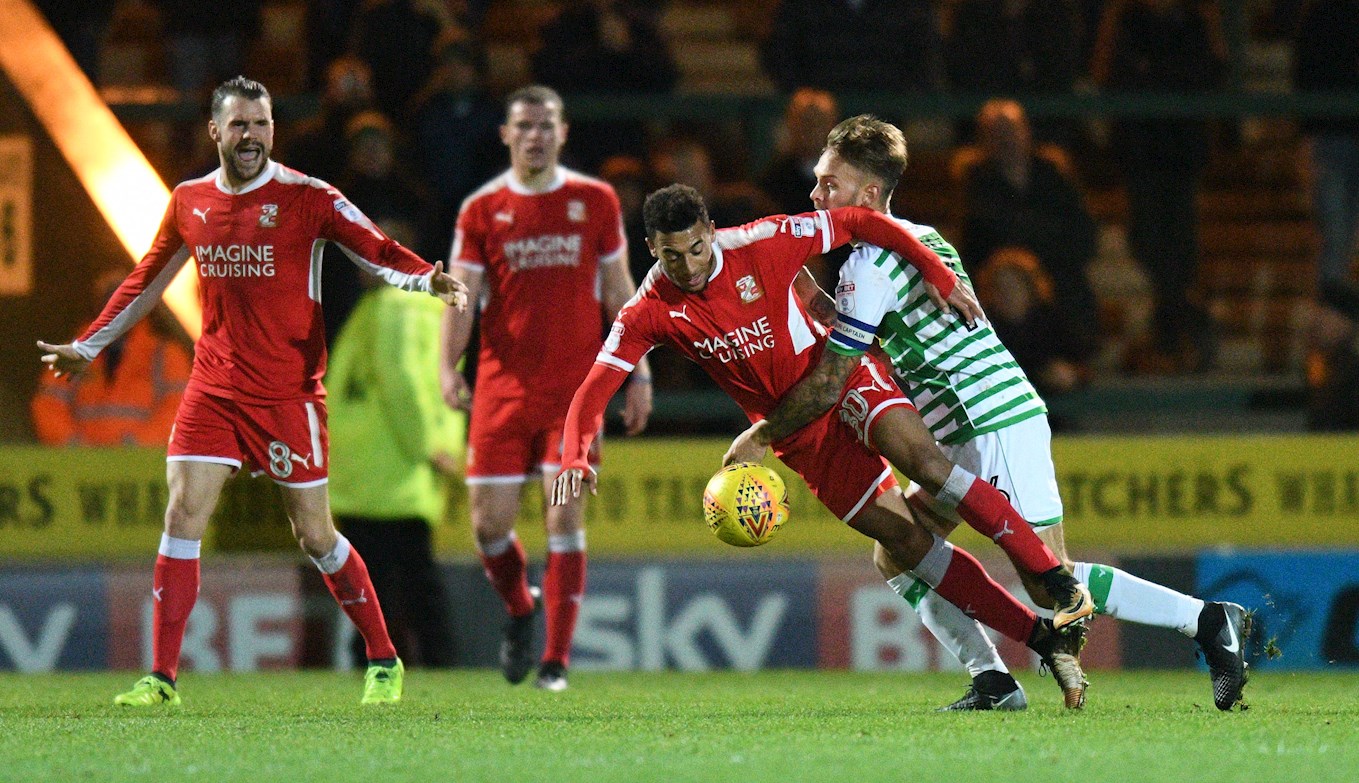 Yeovil did enjoy a brief respite as James sent a tame header straight at Reice Charles-Cook from a Otis Khan free-kick, but it wasn't long before Town came close to restoring parity once more after Taylor sent a well-struck free-kick from 35-yards out into the side netting.

Charles-Cook had to be alert just before the break to keep his side in the game as he got down low to parry a fierce James free-kick, with Sam Surridge only able to blast the rebound over the bar.

And Town so nearly hauled themselves level on the stroke of half-time, only for Krysiak to produce a superb save to somehow claw Elsnik's looping header away to safety.

It was a similar story after the break as Swindon began the second-half well on top, with both Goddard and Anderson seeing shots blocked.

Town were forced into an early change however after Elsnik went down with an injury, and Kellan Gordon was brought on as his replacement.

The winger nearly made an instant impact as he escaped his man before picking out Norris inside the area, but the striker was only able to lash a shot high and wide.

And that prompted Dave Flitcroft to make his second change of the afternoon with Norris making way for Kaiyne Woolery. 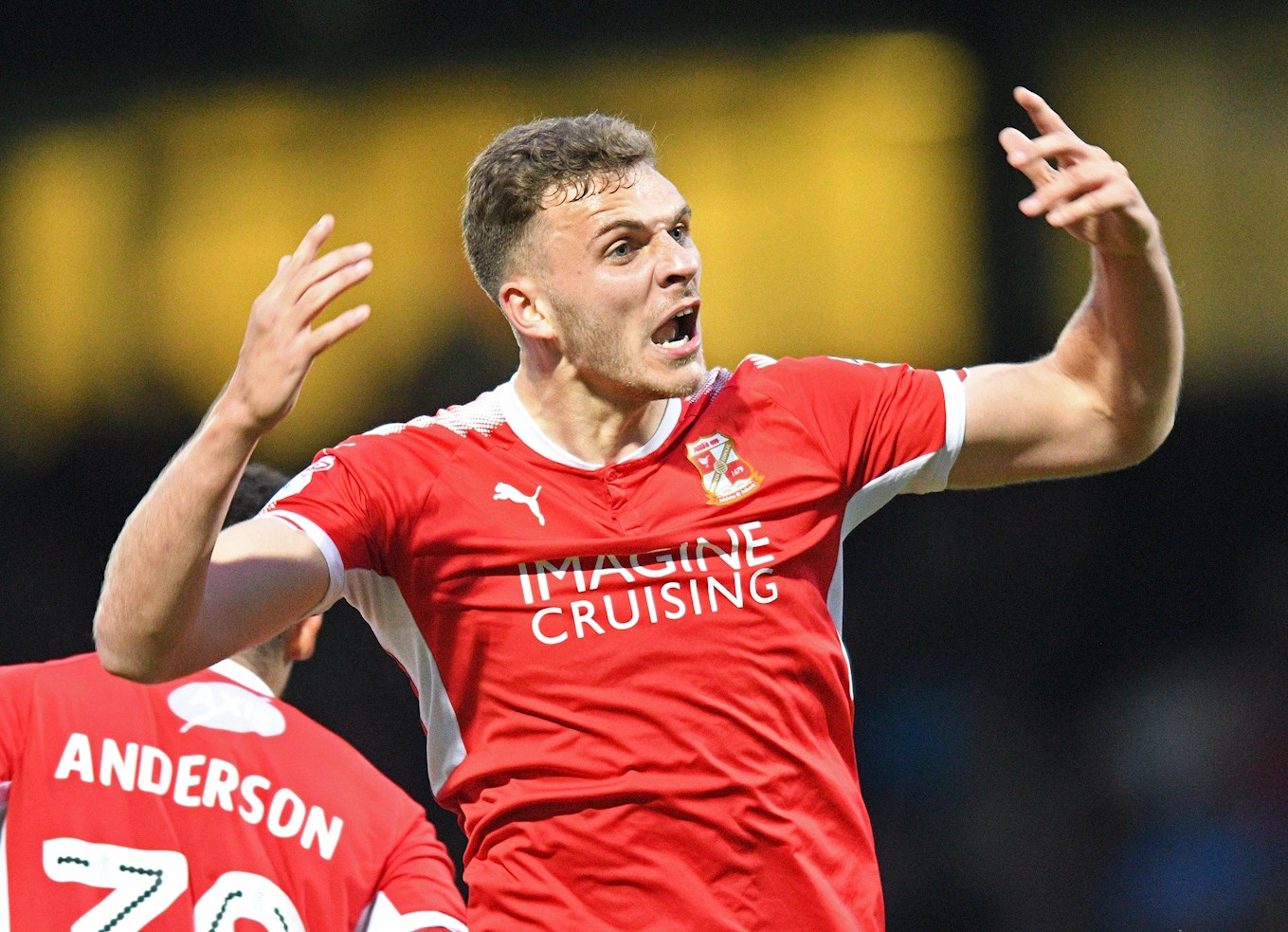 Town's pressure eventually paid off though and they were back on level-terms just before the 70-minute mark.

Goddard warmed the palms of Krysiak who was only able to push the shot out into the path of Gordon, who was able to slam home the rebound.

It was all one-way traffic in the closing stages and Town looked the most likely to clinch a late winner.

Goddard slammed a half-volley into the side netting before Krysiak came sliding out of his goal to deny Matt Preston.

However, Town would not be kept at bay for long and they clinched a dramatic late winner in the dying minutes after Anderson finished from close-range to secure all three points.


Goals either side of half time by Ronan Curtis, and a penalty by Ellis Harrison defeated Swindon Town at Fratton Park 2-0.


Swindon Town were unable to record a second consecutive victory, as Harrison Chapman’s earned Shrewsbury Town a 1-0 win at the County Ground.