Swindon Town suffered their first defeat in three outings after going down 2-1 to Coventry City at The County Ground this evening.

Luke Norris broke the deadlock with an outstanding volley after his side were forced to weather an early storm.

Coventry hit back though through Michael Doyle in what was a frantic and end-to-end first-half and the visitors won it thanks to Duckens Nazon's fine effort after James Dunne was dismissed in the second-half.

Town were forced into making one change with Matty Taylor replacing the injured Chris Hussey at left-back.

There was also a place on the bench for new signing Matt Preston with Dave Flitcroft's side lining-up in a 4-2-3-1 formation once again.

The Reds were looking for their third straight victory but they were put under pressure from the off with Lawrence Vigouroux producing a superb save to deny Max Biamou one-on-one after the striker was played through by Michael Doyle. 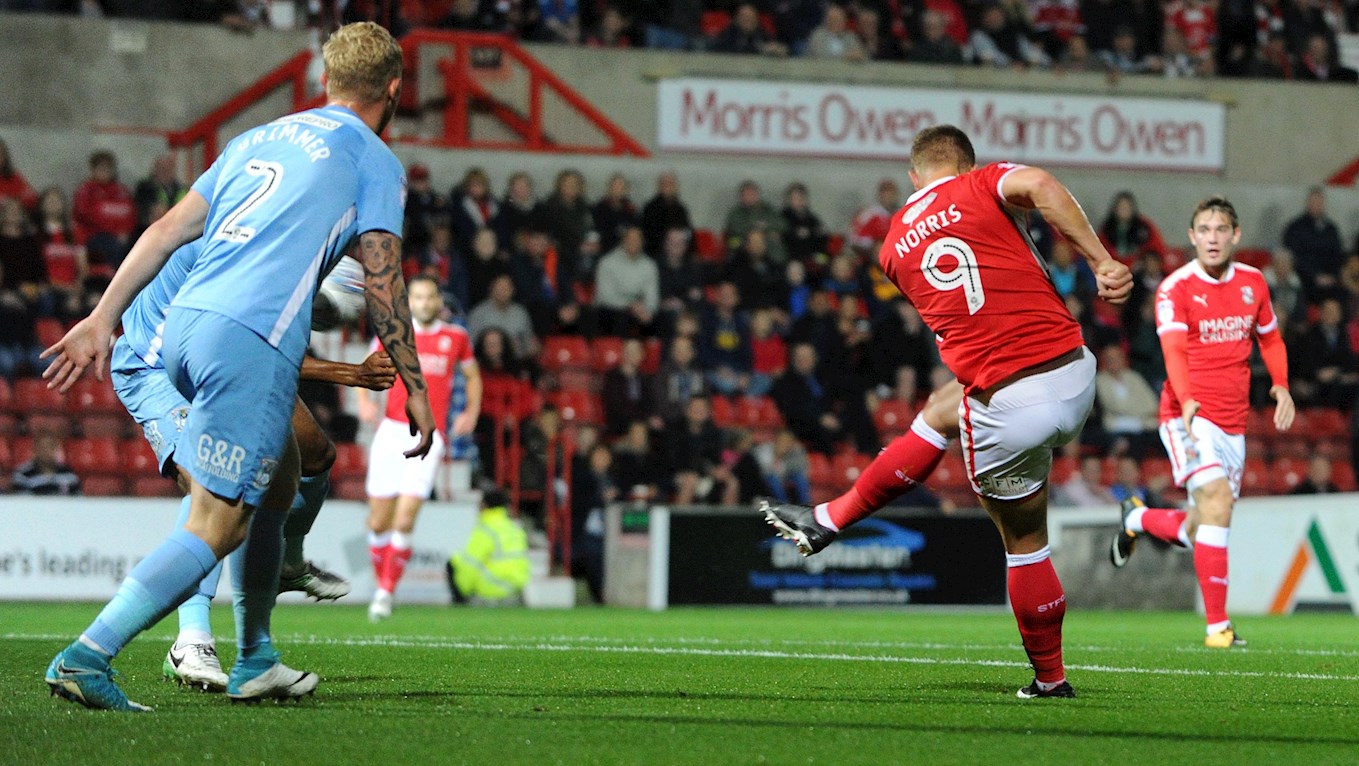 Coventry, who were in good form themselves, then had appeals for a penalty waved away with the hosts taking a little while to settle into the game.

Town were looking nervy at the back and they conceded another chance with Duckens Nazon finding Biamou inside the area, although the striker could only fire a tame shot on the turn straight at Vigouroux.

It was then Swindon's turn to attack with Matty Taylor's well-struck free-kick deflecting just wide of the post.

And it wasn't long before The Reds notched the opener and it arrived in the most stunning of circumstances.

Kellan Gordon's cross was deflected into the path of Luke Norris who set himself before unleashing a superb volley into the back of the net to give his side an early lead.

It could have been two straight after with Keshi Anderson flashing a shot inches wide of the far post after meeting Gordon's pinpoint cross.

The game was really starting to open up and develop a frantic tempo with action at both ends of the field as Nazon thudded an effort into the side netting, before Jordan Willis nodded over from Jodi Jones' corner.

But the equaliser did arrive for The Sky Blues just past the half-hour mark after Jones' cross was deflected into the path of Michael Doyle, who made no mistake from close-range.

The action continued in the latter stages of the first-half with Paul Mullin firing a low shot straight at Burge, before the attacker nodded over from Taylor's corner after Timi Elsnik had seen his shot deflected over the bar. 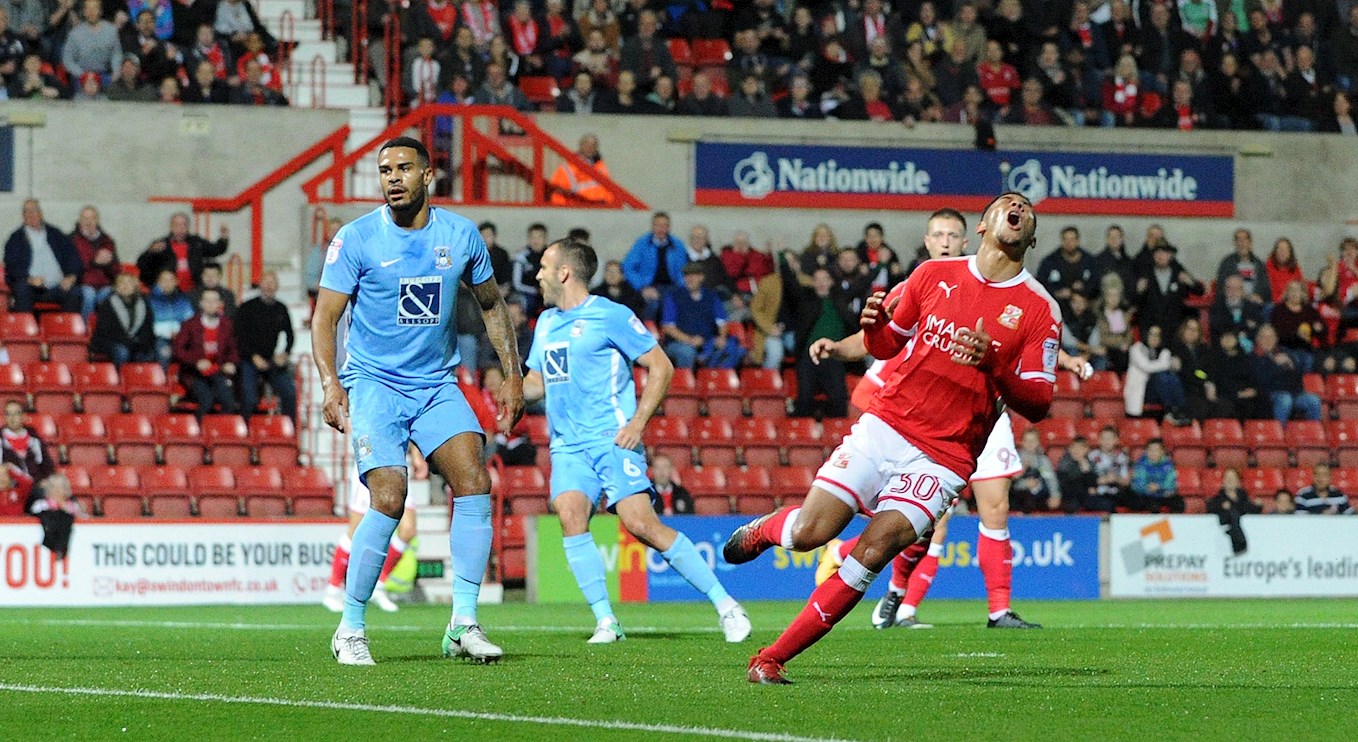 Both sides looked to flex their attacking muscles after the interval although chances proved to be few and far between in the opening exchanges of the second-half.

And it wasn't long before they made another change with Amine Linganzi coming on to take the place of Elsnik.

Town were dealt a hammer blow though late on with James Dunne shown a straight red card for an off the ball incident.

Despite being a man down, the Reds still attacked and they went close to finding a winner with Anderson's overhead kick dropping just wide of the post.

However, Coventry's numerical advantage eventually paid off as Duckens Nazon lashed home from 25-yards to fire his side ahead.

In one last throw of the dice, Town made their third and final sub with Harry Smith replacing Gordon in a bid to add some more bite to the attack. 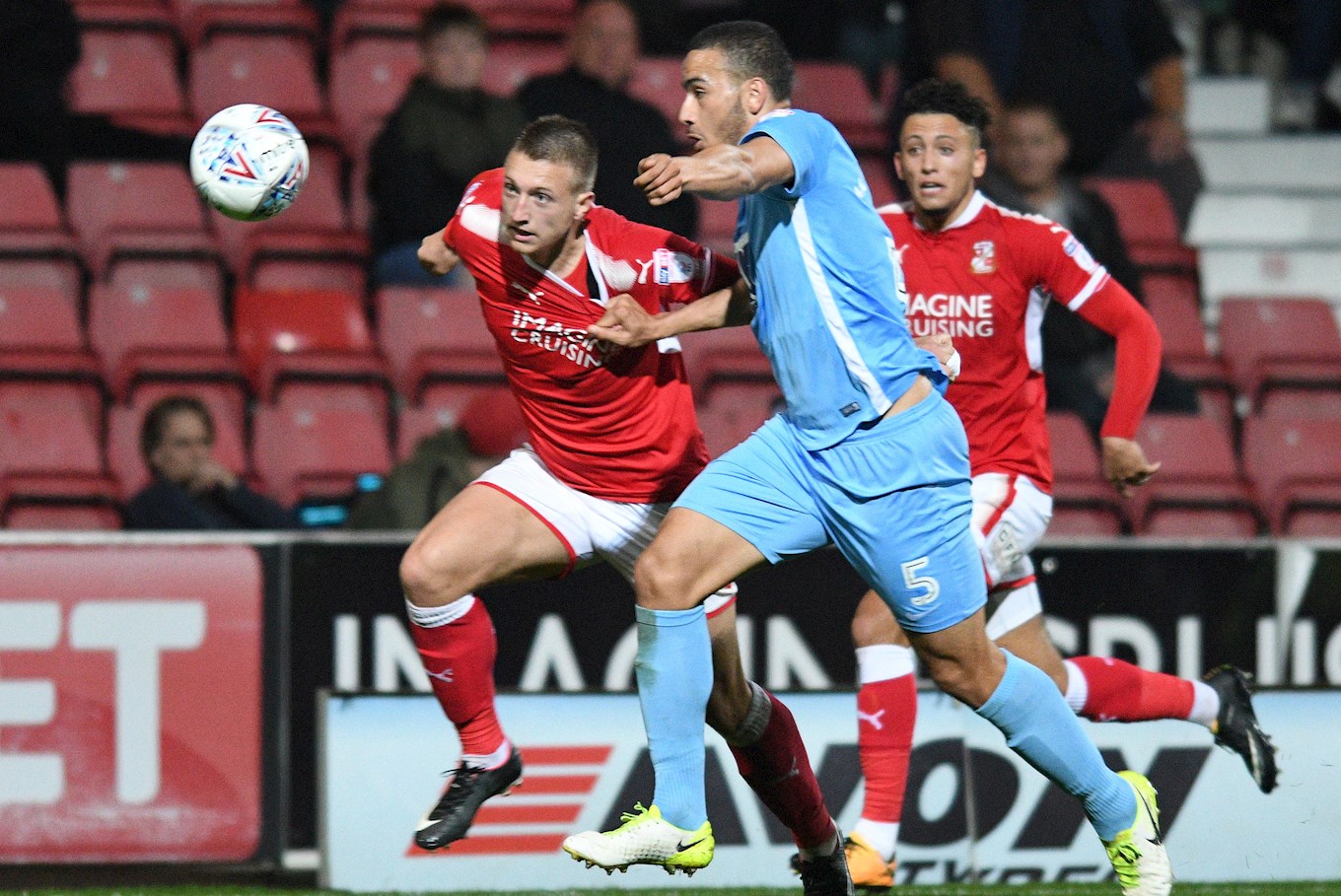 There were chances being created at both ends in the dying minutes with Devon Kelly-Evans lashing wide, while Anderson could only flick a Ben Purkiss cross past the post.

And that miss proved to be costly with Town unable to find a way to claw their way back into the game and salvage a point.