Phil Brown spoke to the media in depth, on a range of topics, ahead of the visit of Micky Mellon’s men.

“The final third is the key factor in any game of football whether defensively, putting bodies on the line, or offensively when you’re wanting calmness of mind. We have got players with that ability. I cannot emphasise the upheaval enough, and I would never use this as an excuse. In my programme notes I talk about how the ball changes hands in every game of football nearly 400 times so if you’re not used to change, won’t accept change, then you’re in the wrong game. That’s what it’s all about and I’m trying to get my players to accept it.

“There’s a change of mentality, game-plan, style of play, a change of DNA (since I’ve come in) – I’m now laying claim to the DNA of this team because of the 16 players that left and the ten that have come in. Only the individuals can eradicate mistakes, but mentality can. A collective mentality is what we’ve been working on this week – at both ends of the pitch. We haven’t had our noses in front at all this season, so let’s get ourselves in front on Saturday and see where it takes us.”

On one goal from open play:

“Yes, one goal from open play but you don’t get a penalty without being in the penalty box – you can take the three penalties and you can say that’s great, ‘the guy that took them has got a big pair of gonads’  for putting the ball in the back of the net but you’ve got to get in there with quality and that’s what we’ve been doing.

“I’m begging the supporters – please stick with it, to understand that there has been massive upheaval at this football club. Let’s settle down and get a foothold in this competition and that’s the second division championship.”

On going out of the Carabao Cup:

Do I want to be in the cup competitions? Absolutely. I would have loved to have celebrated Don Rogers’ goal and the 50 years since we won the League Cup with a cup run – but you can’t say it wasn’t for the want of trying. We put our best game forward (against FGR) – very similar to the opening day. On the opening day, nobody in the stadium, Macclesfield or Swindon Town supporter, could argue that it shouldn’t have been 2-0 or 3-0 and I don’t think anybody could have done that on Tuesday night either.

“Marc Richards has trained all week – a real battering of a week. We have to taper it down tomorrow – he’s gone through collisions, falling, tumbling, weight programme, running programme. Marc’s as near as dammit – to start him would be a risk but might be a worthwhile risk.

“It’s a programme – it’s a 46-game series and we’re two games into it. I’ve got to be thinking about Marc Richards for 40 games – and how we get him to the 40-games in peak condition. That might take maybe one, two, three games but he’s involved Saturday, for sure.”

“Hopefully, Dunney’s learned his lesson – sent off last five minutes of last season has done me no favours, and it’s done him no favours but he’s pushing this week for a start. He got a 70-minute bonus against Chelsea and had a full pre-season of course.

“When I came to the club everybody told me he was a number four. I see Dunney as technical player in the final third – as an 8 or a 10. If he adds goals to his game, my word, he’s got the experience and the nous at this level to get into double figures for the season. I don’t see him as a sitter, I think he’s more of an attack-minded character. He’s a lively character in the changing room. I think his character is something that would personify me – life and soul of the party.”

“They got promoted at Wembley after going down to ten-men early on. That takes a lot of fitness but it doesn’t half take a level of mentality – when you’re looking at 10v11 at Wembley on the size of that pitch – you know cramp’s going to kick in at some stage at 11v11.

“For them to win it was a magnificent achievement and well done, and we doff our hats to them but we have to welcome to the second division and we have to play the type of football we played in the first half against Forest Green and certainly the first half against Macclesfield. We also have to show the spirit that we showed against Macclesfield has to be show for the 7,000 crowd because I thought they played their part – the 12th man was there for everybody to see, I thought the support was magnificent.” 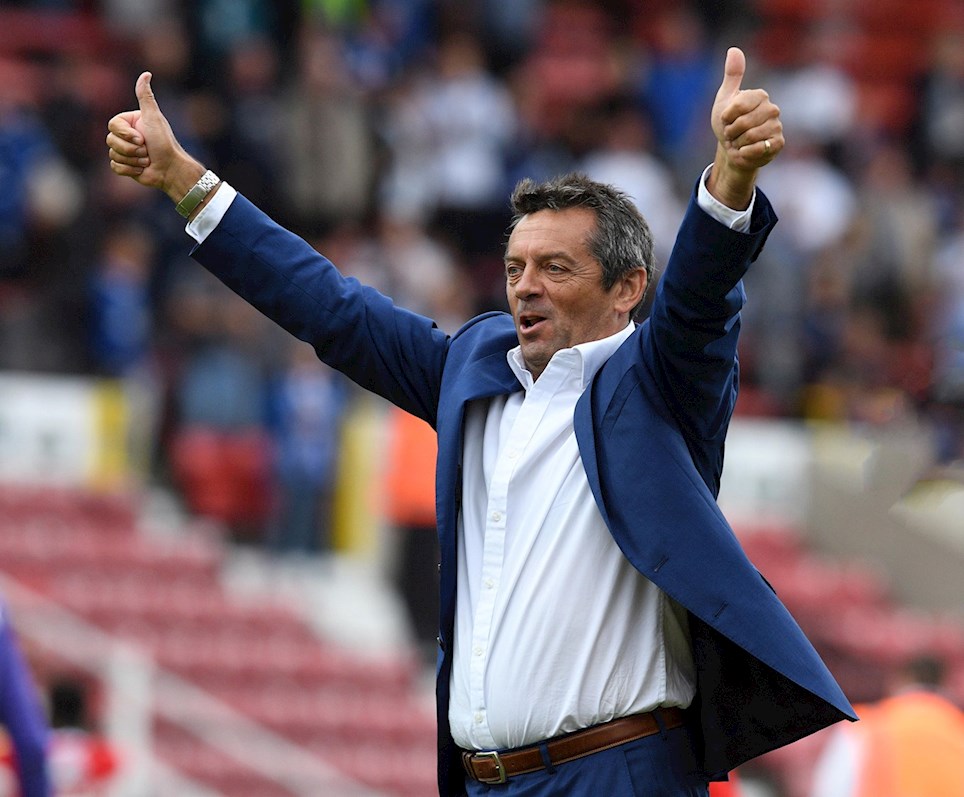