Town went two ahead in an affair that had it all - Dunne opened the scoring before Keshi Anderson doubled the lead.

After the first sending off, Ollie Palmer pulled one back for the home side.

Palmer put a last-gasp penalty past Lawrence Vigouroux to level the game, breaking Town hearts after a full half of football passed with the Robins camped on the edge of their own box.

It was a tight opening to the game - Dominic Poleon almost bent a good effort into the top corner with Lawrence Vigouroux flying to his left.

The deadlock was broken ten minutes in when Dunne's hard work was rewarded. Rob Milsom looked to play the ball square to his goalkeeper, but the midfielder, on his return from suspension, anticipated it and closed Morris down. He blocked the clearance with a slide tackle and the ball bounced into the goal.

Five minutes later it was almost two - McGlashan zipped down the right and clipped his cross in. Olly Lancashire was on the end of it but couldn't guide his effort past Morris.

The home side weren't without threat but the boys were equal to everything.

Palmer, the figurehead of the Crawley attack, was denied by Sid Nelson who slid in to block a cross destined for the striker's outstretched toe.

From the resulting corner, Kyle Knoyle was on-hand to block another effort from Palmer, who was beginning to get sick of the sight of the Robins back-line.

Knoyle was an attacking threat too, for Town - Doughty slipped him through but Morris was equal to the right-back's effort. Dunne couldn't quite get his foot over the ball for the rebound.

Ollie Palmer did his defensive duty for the home side after Matt Taylor whipped in a great cross - James Dunne could have had a second but for the striker's outstretched leg.

With just under ten to play in the half, it was two for the visitors - Doughty instrumental again as he reversed a pass into Keshi. He still had a lot of work to do but chopped inside well and drilled the ball past Morris, catching the goalkeeper offguard with his early shot.

At half-time it looked comfortable but three minutes into the second half, just as Tranmere's red card had changed Saturday's game, an early bath changed this one.

Diagouraga lunged in on Milsom on the halfway line and was given his marching orders after he got their late.

Two minutes later and Crawley were back in the game - Ollie Palmer drilled a loose ball into the roof of the net.

And another red card tipped the odds in the home side's favour even further - James Dunne dived in only ten yards from where his midfield teamate had and was off too.

All hands to the pump ensued. Block after block, save after save - too many to keep count.

Martin Smith threw himself in front of an effort from his Crawley namesake. Nelson headed clear countless crosses. Lancashire managed to boot away after the ball went loose in the box.

However, after 40 minutes staright of defending, with five minutes gone in extra time, Town broke away. Alzate was played through but Josh Payne felled him and the home side were down to ten men.

Matt Taylor drilled his free-kick towards goal and smashed the underside of the crossbar - the ball went down but not over the line.

Crawley rallied for one final push and with Richards tracking back, he clipped Palmer and the referee pointed to the spot. Palmer put it away with Vigouroux diving to the right and the striker sending it straight down the middle.

The nine men fought valiantly but couldn't quite hold on for the win. 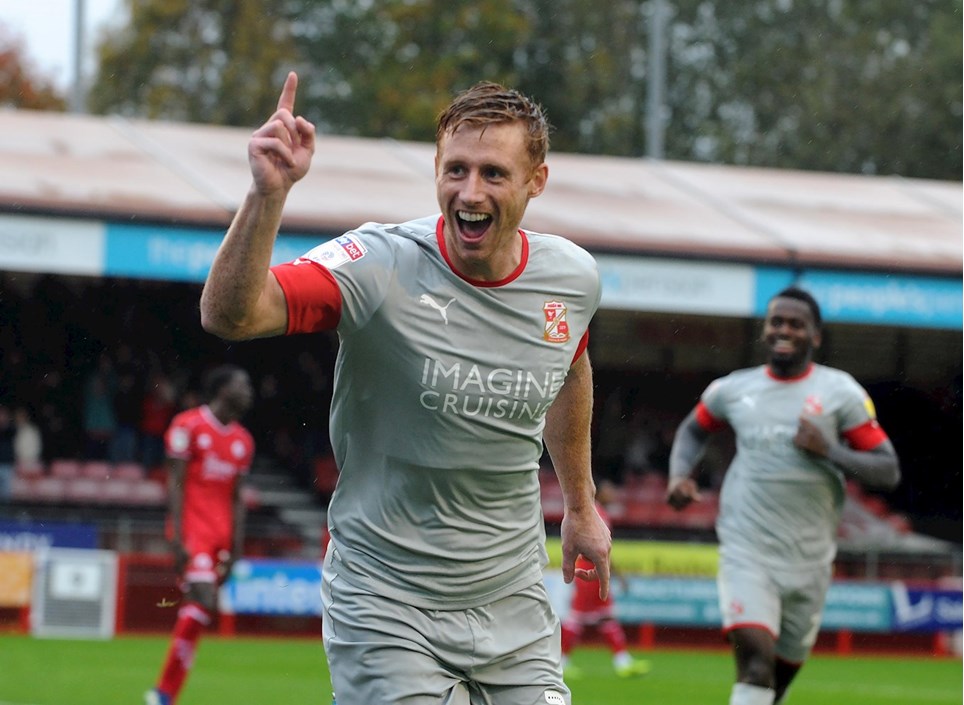 
Eoin Doyle was in an utterly ruthless mood as he secured a hat-trick as Swindon put Crawley to the sword in a perfect 4-0 win at the People’s Pension Stadium.