Phil Brown said that it’s up to him to identify the problems that are preventing his team from picking up maximum points against Northampton.

Matt Taylor pulled Town back into the game with a trademark free-kick after John-Joe O’Toole had put the Cobblers ahead.

Brown admitted that some of his players were not firing on all cylinders but was pleased the impact of his substitutions.

“We’re a group of individuals playing in a team sport, and if one or two are off or not firing on all cylinders then you’re not going to start well as a team.”

“It’s up to me to identify the problems, of course, and put it right.

“One or two are suffering out there and not playing on top of their game, shall we say.

“But we’ve certainly got one or two that are playing on top of their game and there’s lots to admire, certainly regarding the substitutes that came on.

“I thought Scott (Twine) and Keshi (Anderson) were good.

“Keshi’s response to being left out was outstanding – he made a big difference.

“But I need that from minute one, if he does start the next game.”

Brown had the feeling that the first goal was important as the Robins had failed to do so in their last two games.

“I thought that in the first half they came out of the traps very well, and the first goal was going to be important.

“If we got the goal against a newly-managed team then they might have gone back to their old ways but when they got it I thought they’ve got something to hang onto here.

“Our response after they scored was outstanding. And if we started the game with that sort of mentality – a front foot approach – then it could’ve been different.

“We had two great chances at the start. James (Dunne) and Marc (Richards) forced their goalkeeper into making two very brave saves. Both players didn’t do anything wrong, they hit the target and worked the goalkeeper. But six-yard chances should hit the back of the net.

“It was one of those games where you look and think they might be happy with a point.

“When they scored, the response from the players is what I want from minute one – not minute 60.

“If we get that sort of play from the start, we’ll have a chance.” 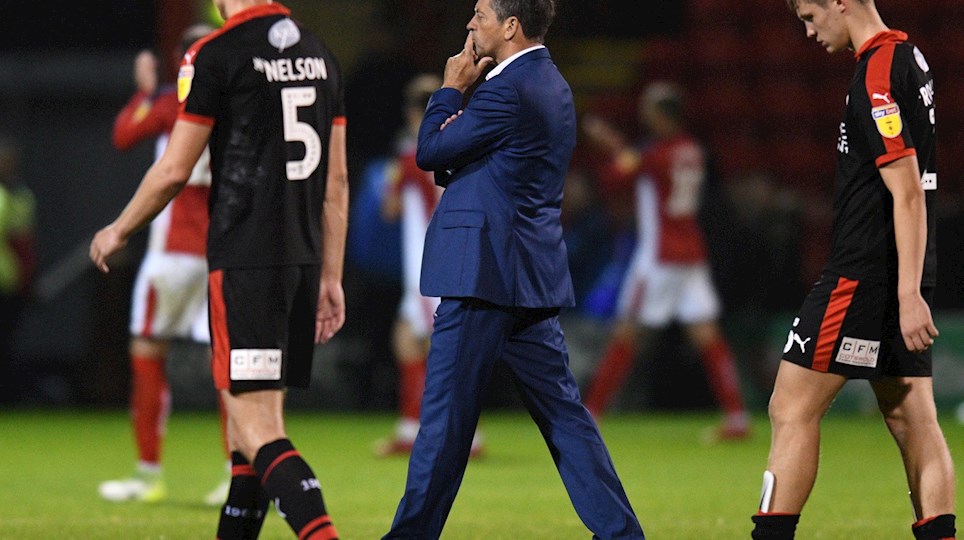