Town were imperious in their second away win on the trot as they put three past Yeovil, who hadn’t conceded in the league in the previous six games.

Steven Alzate, Matt Taylor and Elijah Adebayo were on target for the visitors who were dominant from start to finish.

All three goals came from long distance with Olufela Olomola missing a penalty with ten minutes to go – spurning the chance to give the Glovers a chance.

Swindon dominated the first half from the off, keeping the ball in the early stages of the match.

Keshi Anderson slipped a lovely through ball to Elijah Adebayo before Omar Sowunmi slid in to stop a shot. From the resulting corner, the ball fell to Olly Lancashire but his shot on the turn trickled just wide of the goal.

Adebayo was in the thick of the action again – he rose above Carl Dickinson at the back post but the defender did just enough to ensure the Fulham loanee’s header hit the roof of the net, rather than the back of it.

Five minutes later, it was Keshi’s turn to find the top of the net – after the ball was half-cleared by the Glovers, Anderson looked to guide a lob over Batxter but it kissed the top of the crossbar on the way down.

Deadlock at the break.

Town continued to press but to no avail – a moment of worry followed a period of possesion when Yeovil looked to go forward. Sid Nelson slid in and looked in pain – but true to previous showings of character the Millwall loanee carried on.

Town warned Yeovil of a pending opener – Keshi fizzed a shot towards goal that swayed before Baxter tipped over. Five minutes later, Baxter was beaten.

Alzate glided past his man in midfield has he had done all game long and unleashed a fierce shot from 25 yards – the Yeovil goalkeeper was helpless to prevent as the ball skidded off the sodden ground and into the corner.

From that, Town pushed for a second – Keshi, a constant thorn in the Glovers’ side, was in behind but Baxter made himself big to stop a second. Alzate looked to add to his tally but his effort was straight at Baxter who was keeping his side in the game.

Town got their second in equally impressive fashion to the first – Matt  Taylor whipped in a trademark free-kick from 25 yards to put the Robins two up and looking likely for their second away win on the trot.

Two minutes, later with ten minutes to play and it looked like Town had made it difficult for themselves – Keshi Anderson knocked over a Yeovil attacker and the referee pointed to the spot.

Southampton loanee, Olufela Olomola stepped up but he put his penalty over the goal, via the top of the crossbar.

Buoyed by that, Town went in search of a third to really put a marker down – and it came with another belter. Elijah Adebayo cut inside on the corner of the left-hand side of the box and bent an effort into the far-right post. That sealed a dominant Town performance in front of 871 travelling fans. 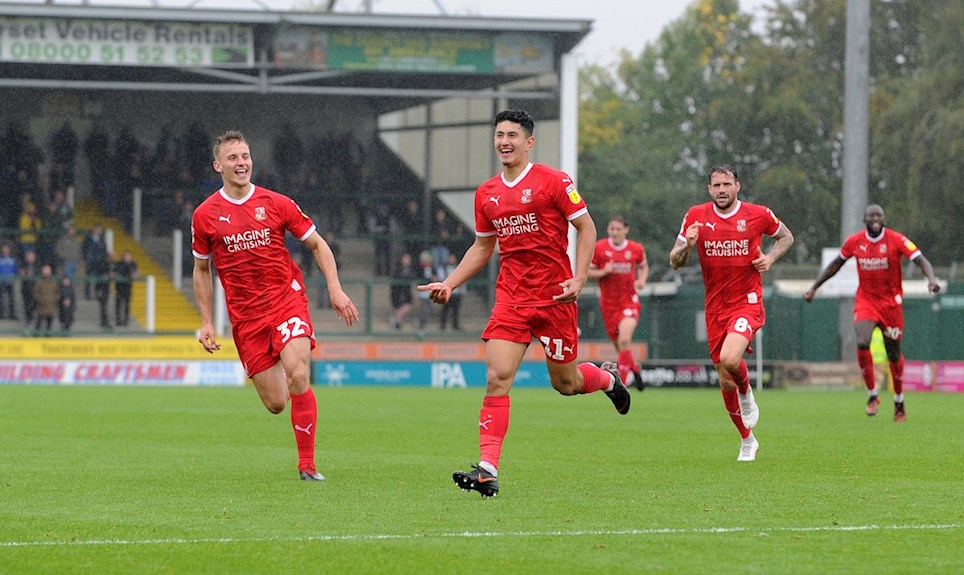 ALZATE: EVERYONE WAS UP FOR IT FROM THE START


Steven Alzate felt that Swindon managed the conditions well as they romped to a 3-0 away win against Yeovil.