Swindon were the better of the two sides in a goalless draw against Newport County at Rodney Parade.

The visiting Robins battle well against the aerial threat of the Exiles and created most chances but were ultimately thwarted by the heroics of Joe Day, in the Newport goal.

Day saved his side countless times including one incredible stop from point-blank range off of a Dion Conroy volley.

From the early exchanges, it looked like Swindon were in for a frantic affair – Newport kept them hemmed in for a tough opening ten minutes but the Robins’ back four held firm and Town worked themselves into the game.

It took until the 16th minute for the visitors to have their first shot – Kyle Bennett struck from 25 yards and after Joe Day palmed away his effort, Theo Robinson couldn’t react quick enough to guide the rebound goalwards.

Day had to be on his toes to thwart Town again as they grew into the game – just before the 20th minute Keshi Anderson crashed a free-kick at him that dipped and swerved but did not evade the Newport stopper.

And if skill couldn’t do it for the Robins, luck didn’t either – Ali Koiki looped a cross towards the back post which curled onto the crossbar and away.

Anderson looked the most likely in the first period to break the deadlock – with ten minutes left of the half, he spun away on the centre circle, beat four defenders but had his effort well saved, again, by Day.

On 39 minutes, it was the Town stopper, Luke McCormick who had to be on his guard – Robbie Willmott powered an effort towards the goal but McCormick got a strong hand on it and got it away.

Swindon’s second-half only chance before the hour mark came when Kyle Bennett received the ball on the left, moved inside, sold a defender with a feint back before opening up his body and going for goal. Day was there to smother despite the distracting dive of Woolery as he looked to nick it away.

On the hour, Swindon had a huge chance – it was a matter of inches that stood between Danny Rose’s outstretched toe and the ball, and also a certain goal.

After a flowing and fast counter attack, Kyle Knoyle squared across goal but Rose couldn’t find contact. If he had, it was a certain goal.

Town’s best chance of the whole game came on 72 minutes – Dion Conroy rose at the back post and had his header cleared off the line. Conroy was first to the rebound and volleyed from close range to the near post but Newport’s goalkeeper, Day flicked his hand out and managed to perfectly tip round the post.

Swindon spent most of the rest of the game in the ascendency – Kyle Bennett had a shot that rustled the side-netting before substitute, Marc Richards headed off target to round off a tough draw. 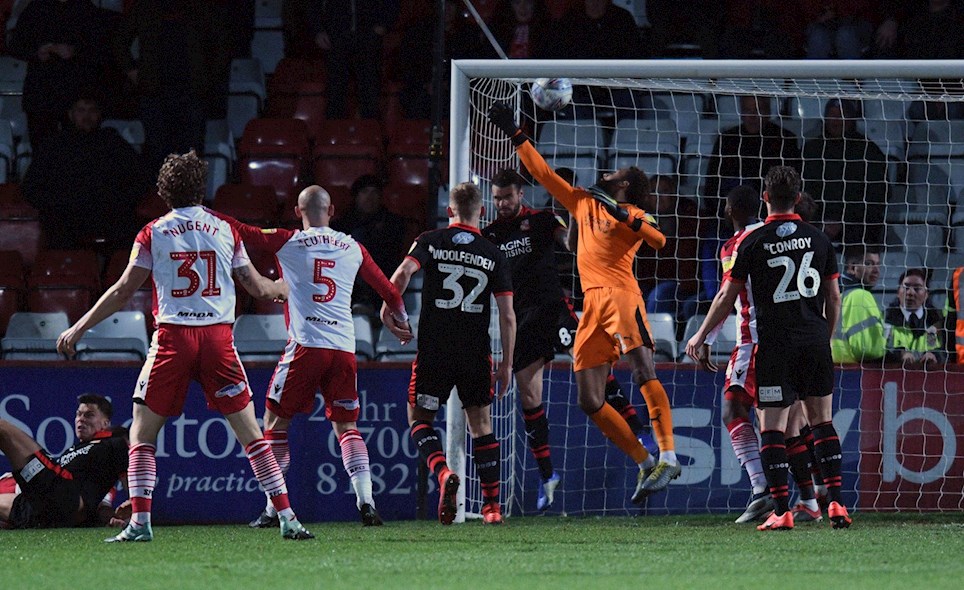 
Swindon were on the receiving end of their second defeat on the road in a week as they lost 2-0 to Stevenage.