Swindon Town are delighted to reveal our third kit for the 2019/20 season featuring the Darby-Rimmer MND Foundation as its front of shirt sponsor.

The Darby-Rimmer Foundation is seeking to raise money to help fight motor-neurone disease, and was founded by former Swindon Town player, Stephen Darby and Chris Rimmer, an ex-serviceman diagnosed with the disease.

Last year, everyone associated with the football club was shocked by the news of former player Stephen Darby’s diagnosis and we were deeply touched by the speeches made at Bradford City’s pre-season friendly in aid of the newly-formed foundation.

We hope that by offering the front of shirt sponsorship for the 2019/20 season to the Foundation, we can fully support as well as raise awareness and well needed funds for the Charity.

“I can’t thank everyone associated with Swindon Town enough for their support of the Darby Rimmer MND Foundation. To have the Foundation logo on the third kit is fantastic in helping us raise awareness of the charity and are objectives to support sufferers of Motor Neurone Disease, research the illness and work towards our main goal of finding a cure for the disease. The support from Swindon Town will allow us to grow the Foundation and keep pushing forward in our fight against MND”.

A striking purple shirt has been provided by kit sponsors PUMA for this season’s third kit, with Imagine Cruising, our mainline sponsors, kindly sacrificing their option to have the main shirt sponsorship.

Instead, Imagine Cruising will proudly sit at the top of the back of the shirt with The Darby-Rimmer Foundation featuring on the front.

Martin Palmer, Marketing Manager for Imagine Cruising has said that:

“Charity is at the heart of everything we do at Imagine Cruising, so we have decided to donate our front of shirt advertising space on a new third Swindon Town FC kit to the Darby Rimmer MND Foundation charity for a number of games this season.

“This is in addition to our pledge to support Swindon Town with their initiative to raise £8,500 to fund the training, medical equipment and uniform for critical care paramedic Keith Mills at the Wiltshire Air Ambulance, and further strengthens the relationship between us and Swindon Town FC. Imagine Cruising are also proud supporters of the Prospect Hospice and Julia’s House in the local area.”

We are sure that fans will agree that it is particularly apt that the Darby-Rimmer Foundation will feature on the front of our third kit with Darby’s most notable contribution for the club coming in 2009/10’s blue shirt against Charlton at the Valley.

In that year’s third kit, Darby coolly tucked home the deciding penalty after the League One play-off semi-final went to a shoot-out.

“As a Club, we are proud to support the Darby Rimmer MND Foundation by featuring them on the front of our third-kit. We hope that this gesture goes a long way to support the Charity and to help raise awareness of the fantastic work that both Stephen and Chris are doing for Motor Neurone Disease awareness across the UK."

"I'd like to thank Imagine Cruising for allowing this very important charity to go on the front of the third kit. Bradford City is a club very close to my heart and were very supportive of me during my time there as a player and their support of Stephen has been exceptional. I felt that it would be wrong of our club not to take up the opportunity to help such a worthy cause too."

The third kit will not go on sale, but all match-worn shirts will be auctioned off at the end of the season in aid of the Darby-Rimmer MND Foundation.

So, we will once again be reaching out to our supporters, sponsors and business partners for their generosity when making bids for the shirts, with all proceeds going to the Darby-Rimmer Foundation. 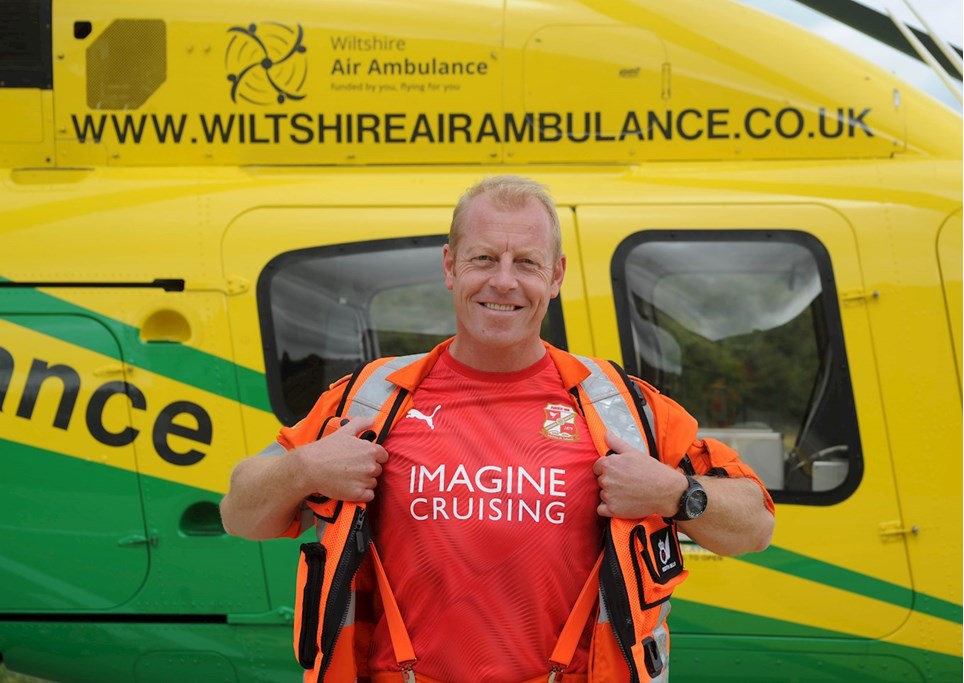 
Wiltshire Air Ambulance’s logo will sit proudly on the back of Swindon Town’s away shirt for the 2019/20 season.