After a two-year spell in the National League, Leyton Orient are back in the EFL after being promoted as champions. They are the first club to feature in our latest series of League Two's new joiners.

Formed in 1881, the East London club was put together when members of Glyn Cricket Club formed a football team to keep fit during the winter months. In 1888, the club took the name of Orient – the idea of a player who worked for Orient Shipping Line.

After moving to Clapton in 1898, the O’s eventually found home in Leyton where they still reside in 1937 before financial trouble almost saw them cease to exist after World War II. A fighting fund was set up, was successful and the name ‘Leyton Orient’ was born.

The O’s reached the top division of the football league for the first time in 1962 but were relegated at the end of the season following which they spent over 20 years bouncing between Division One and Division Two.

In 1985, Orient dropped into the fourth division for the first time in their history. It took them four attempts but in 1988/89 they made the jump back up beating Scunthorpe United and Wrexham on their way back up to the third tier.

Fiscal difficulties returned to Brisbane Road in 1994 when, with relegation looming, the PFA had to cover players’ wages for a period during the season. It looked like the O’s would be unable to fulfil their end-of-season fixture list until boxing promoter, Barry Hearn stepped in to take control of the club he supported as a boy.

After regaining their stability, Orient were heartbroken in two play-off final defeats in 1999 and 2001 as they spent their longest spell in the bottom division of the Football League.

After 11 years in the basement they made the step back up to League One, where they remained until 2004.

Their two-year spell back in the fourth tier ended with a memorable season. In the 2005/06 season, they came third overall ending the campaign in the most dramatic fashion – Lee Steele scored deep into injury time snatching an automatic promotion spot on the final day, while also sending Oxford into the Conference.

Orient spent nearly 10 years in League One once again – coming inside the play-off places once in that time; however, in 2015 they were relegated with controversial owner Francesco Becchetti causing a rift between the club and its fans.

After two season in League Two, they were relegated out of the Football League for the first time in their history but, with Becchetti leaving the club, the O’s were given a fresh start and, after a year of consolidation, were promoted, as champions back into the Football Leaugue.

The 2018/19 season was an undoubted success for the O’s – in the league, they were promoted as champions from an extremely competitive National League. However, they aren’t quite done yet – they face Fylde at Wembley this Sunday in the FA Trophy Final too.

Justin Edinburgh guided his side to the top of the non-league tree in their second season out of the EFL, winning the division by three points. Solihull Moors were their closest competitors in the end but few would argue that Orient deserved their title.

Throughout the season, the East Londonders were tough to beat – they were 13 games in to the season before they lost their first game. Nine more games unbeaten followed their first defeat, a 1-0 loss at home to Sutton United, ensuring only one loss before December.

The form of Macauley Bonne, who finished as the league’s third top goalscorer, was another positive – he’d scored 16 goals before the start of advent including a hat-trick in the demolition of Braintree as well scoring a goal per game in five consecutive league outings.

By the end of the year, Orient were well on for a promotion push, hotly contested by Salford City and Solihull Moors – with the O’s having only lost to teams in the capital or surrounding areas.

Their first loss to a team outside of London or the surrounding area, came against fellow title-challengers, Salford City – they were beaten comfortably in their second game of the new year following a busy Christmas schedule.

The O’s navigated their way through a tough February and found form going into March – their busiest month of the season. They played eight games, won the first seven and drew their last in a month that saw them reach the FA Trophy over two legs and play on every Tuesday but one. The form of Josh Coulson definitely caught the eye as he bagged three goals including both in the 2-1 win over Aldershot.

A nervy start to April had O’s fans nervous because of the National League’s ‘win or bust’ nature but three wins on the bounce over Eastleigh, Sutton United and Harrogate Town.

In the end, it was two 0-0 draws that got them over the line – away at Solihull on the Easter Monday before they confirmed their title at Brisbane Road the Saturday after against Braintree.

Given their recent history with Francesco Becchetti the O’s return to the Football League will taste even sweeter with the fans now owning an all-important chunk of their club.

The most recent player to feature for both the O’s and the Robins is Steven Alzate – the Brighton youngster started off his career with Orient.

The club’s plight helped his development as he was given a chance perhaps before he would have in alternative circumstances . Speaking to the club’s programme, Red Review, back in Alzate described his time with the academy at Brisbane Road.

“I was at Fulham’s development side from nine until 12-years-old and then from there, I moved onto Leyton Orient and I was there until two years ago, so a good seven years.

“Orient was where it all started really – I broke into the first-team.

“When I went to Leyton Orient it was, not a drop, but a lower standard and the aim was to come back up and the football wasn’t too pretty but I had to get through that. Luckily, they gave me the chance in the first-team and I think I took that chance, that’s when I got the move to Brighton.”

Alzate spent six months on-loan at the County Ground and impressed in midfield with his assists and eye for goal – he won the game at Notts County with an excellent solo strike while also helping Town advance in the FA Cup in a tightly-contested tie with York City. 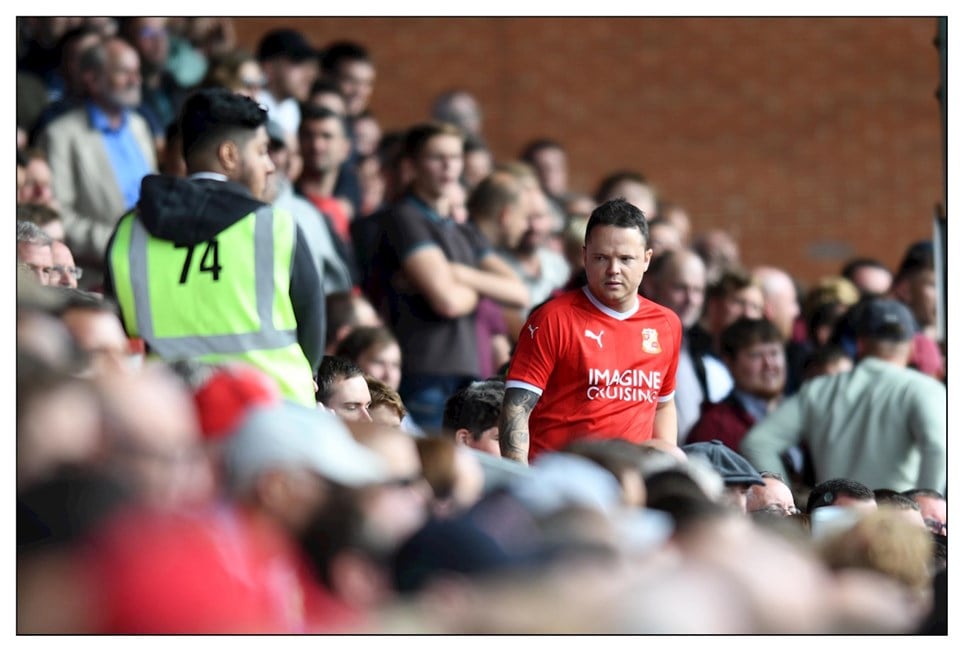