Swindon stayed top of the League Two after showing two important sides to their game in their 1-0 victory over Mansfield at the County Ground.

In the first half, Swindon showed their style and ability to outplay their opponents with Eoin Doyle scoring the game’s only goal on 22 minutes.

In the second half, it was all about grit and determination as an aerial bombardment came their way.

The biggest pre-match cheer of the season so far was reserved for Paul Caddis, on his return to the County Ground following a seven-year hiatus. Last time he started a game for Swindon the club were top of League Two and that was the case at the start of the day as he re-full debuted at right-back with Rob Hunt switching to the opposite flank.

It didn’t take him long to get right into the thick of the action; a whipped cross was almost turned home by Eoin Doyle before the offside flag stopped any momentary hope.

He was at it again on eight minutes when he cut inside onto his weaker left foot – he bent an effort that lofted over the outstretched arm of Conrad Logan but he didn’t quite put enough curl on it and it bounced off the upright and away.

Town dominated but the visiting Stags were not without threat, especially on the break. Steven Benda didn’t hang around on his line when Jacob Mellis tried to set Nicky Maynard free. His clearance came a good 30 yards off his line.

On 22 minutes, Town had a deserved lead – and it was through a move that had been tried throughout the first half. Jerry Yates moved inside from the right with Anthony Grant overlapping, although this had been Rob Hunt’s role on numerous occasions previously, his cross was flicked away by Krystian Pearce. Kaiyne Woolery brought it down brilliant and found Eoin Doyle inside the six-yard box – there was only one ending from there. The Ginger Pele grabbed his 17th in 16 games and put the Town ahead with a comfortable finish past Logan.

On 35 minutes, Town could have had two – following the move of the match. Doughty tucked a pass into Yates, he waited for the midfielder to run off his defender and clipped a pass into his feet. On the turn, Doughty set Doyle but his half-volley was tipped onto the crossbar by Logan preventing a second.

Town were almost made to rue that missed chance but Steven Benda, two minutes later, managed to dive at the feet of Maynard to stop him from finishing or rounding him.

If, in the first half, Swindon showed their quality in build-up, the second was all about grit and commitment. Not much of the latter 45 was pretty at all but good teams find a way to win, no matter what fashion.

Fryers and Baudry, joined by Broadbent later in the half, were heading and kicking everything that came their way. After an initial flurry of activity from the home side, Mansfield began to force Wellens’ men back with a different, more direct, style than in the opening stages of the game.

Town changed to a three after Steven Benda had to acrobatically over the bar just after the hour mark – but with the addition of Broadbent brought an added physicality and security as Wellens switched to a three at the back for the first time this season.

Jerry Yates could have scored a decisive second goal with 20 minutes to go but his looped effort from 12 yards went over Logan’s bar.

All in all, despite not being the prettiest, Wellens was happy with his side’s ability to see the game out. 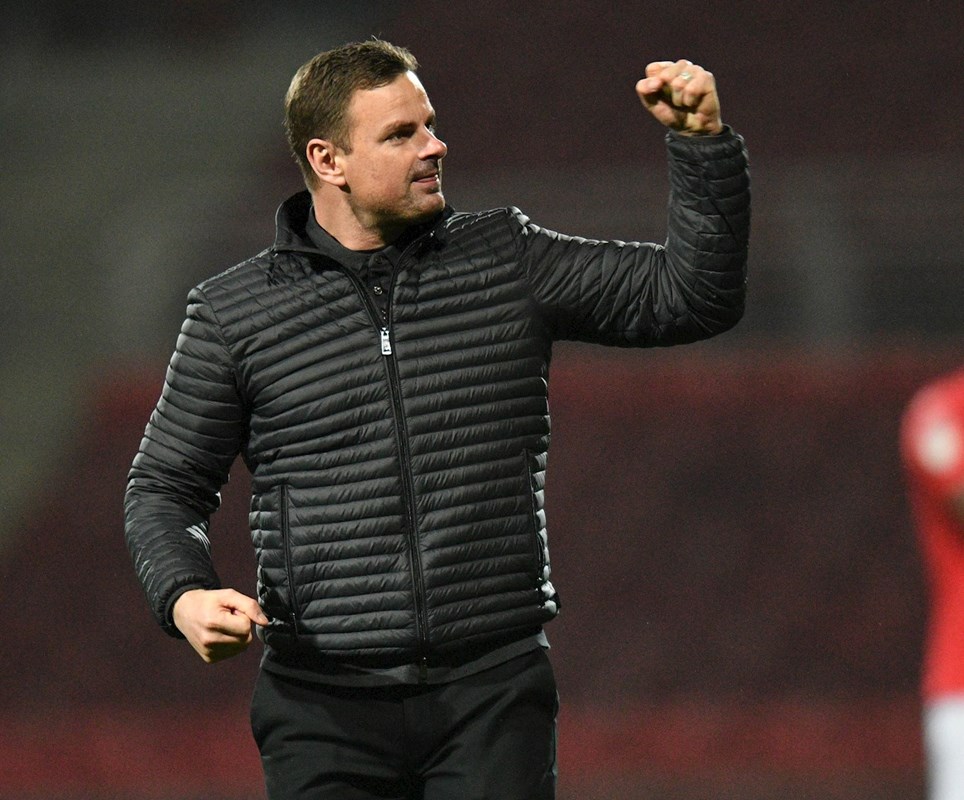 WELLENS TALKS TO THE PRESS AHEAD OF MANSFIELD


Ahead of tomorrow’s fixture against Mansfield a pitch inspection will take place at 9.45am.