This weekend’s fixture will be the 39th meeting between Swindon and Crewe. The last two matches between the sides have ended in victory for Saturday’s hosts; however, before these defeats, Swindon were unbeaten in nine games, winning on seven of these occasions.

The most recent encounter between the Robins and the Railwaymen came at the tail-end of last season where a Chris Porter brace was enough to secure the three points despite a second half penalty converted by Michael Doughty.

Crewe have claimed 26 points this season placing them level on points with Exeter City, however a superior goal difference puts them top of the table.

There’s been no shortage of goals wherever Crewe have gone this season. Crewe are the top scorers in the league with 26 goals however they have also conceded 16 goals which is the joint most in the top eight teams – the other team being Swindon.

The overall record between the clubs comes out in Town’s favour with 18 wins, 6 draws and 14 losses. The fixture promises goals with 25 goals in the last six meeting alone including two 4-3 wins for the Robins thanks to last minute winners from Marc Richards (27 Jan 2018) and Nicky Ajose (16 Jan 2016).

Crewe boss, David Artell, took over in January 2017 from Steve Davis when they were on the brink of relegation from League Two. Artell managed to turn the club’s fortunes around and lead the team to a 17th place finish.

Artell started his career at Rotherham where he made 71 appearances helping the Millers secure back-to-back promotions to the first division back in 2001. For the 2002-03 season, Artell was loaned out to Shrewsbury, where he featured in the FA Cup upset of Premier League giants Everton.

The ex-defender went on to play for Mansfield Town and Chester City making 55 and 91 appearances respectively after two years at each club before moving to the Football League newcomers at the time, Morecambe. He quickly became a fan favourite after scoring a late winner in a League Cup upset against Preston in just his second game.

After accumulating 129 appearances over 3 years at the club and 15 goals, Artell went on join his current employers, Crewe on a two year contract. He eventually captained the side to a play-off final win against Cheltenham at Wembley.

Artell went on to enjoy spells at Northampton, Wrexham, Bala Town before making his final senior appearance for Port Talbot Town in 2016. He then took over at Crewe Alexandra where his team have been improving consistently. 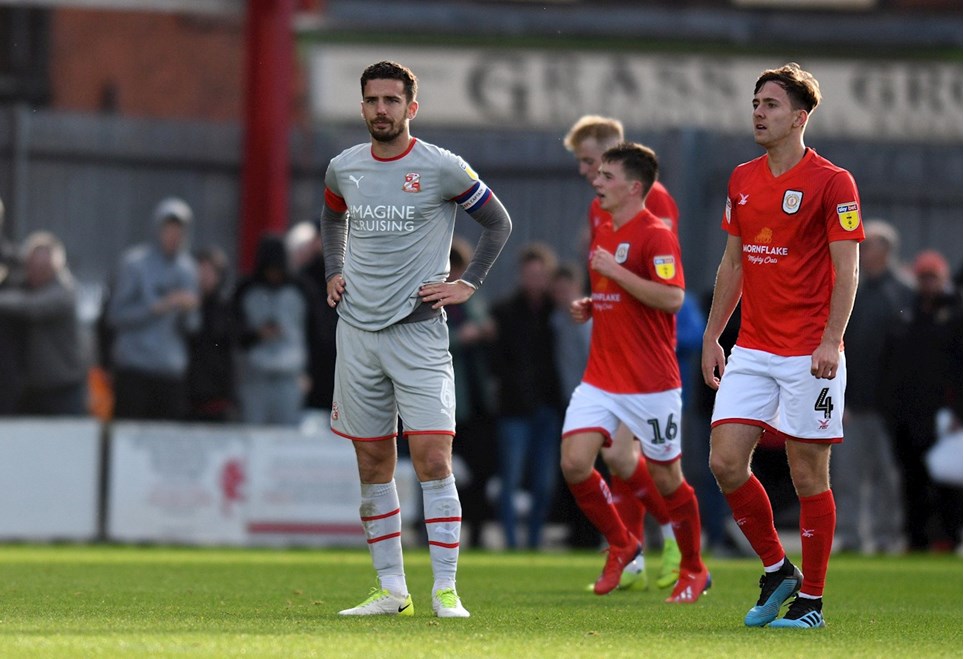 
Swindon suffered defeat in the final knockings of the game as Crewe scored two late goals to secure a deserved victory in the end.