Goals from Vadaine Oliver and Trae Coyle gave Gillingham three points in a game that was very even and perhaps didn’t entirely reflect in the scoreline.

Town started off certainly the brighter side with an immediate chance when Matt Smith played a killer ball in behind the home defence, setting Tyler Smith free, but a defender managed to get back and get the block in to avert from danger.

There was also great link-up play on the left flank between Diallang Jaiyesimi and Dion Donohue early on, creating a few chances that were saved by Jack Bonham in the Gillingham net.

Just after the quarter of an hour mark, the home side took the lead very much against the run of play when Vadaine Oliver got on the end of a flick on and found the top corner.

Town responded with more positive attacking play and came so close to levelling things up when Jonathan Grounds header hit the top of the crossbar, bouncing out to Tyler Smith, whose header also hit the woodwork.

With nine minutes to go, Gillingham had a dangerous free-kick just outside the penalty area. Robertson’s strike was gobbled up by Kovar before the onrushing Akinde managed to get to the ball.

Moments later, Town were forced into making their first change as Dion Donohue appeared to be struggling with an injury, forcing him off for Dion Conroy, who made his first league appearance in over fourteen months, since the injury he sustained at Newport County.

Following the half-time break, Swindon came out in similar fashion as they did the first with cute play in and around the Gillingham box, but just couldn’t find a way through.

Jack Payne and Jaiyesimi again creative but the final piece to the jigsaw was lacking.

Matt Smith came closest to putting us back on level terms when he received a pass from Anthony Grant, turned towards goal and fired a left-footed effort just past the post.

Town’s attacking persistence was undone with ten minutes to go, when Trae Coyle was found in space to finish past Kovar.

Five minutes later, Grant went down to receive treatment and was replaced by another absentee in Jordan Lyden, playing his first minutes since coming off against Charlton in our first-round Carabao Cup exit to Charlton.

It just wasn’t to be for the lads today and they look to next Saturday when 2,000 fans will be allowed into the County Ground to cheer them on against Fleetwood Town. 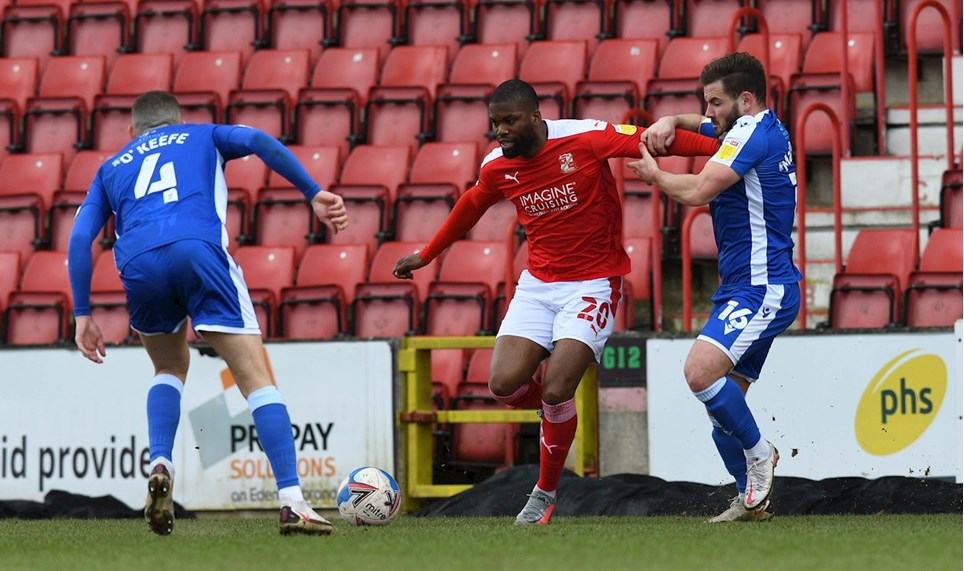