Peckham is famous for one thing. Only Fools and Horses. Well, the borough’s two favourite sons might be given a run for their bread and honey in Wiltshire.

It’s Diallang and Rarmani that have lit up League Two in the last two months rather than Delboy and Rodney.

They grew up five minutes’ walk from each other in the borough made notorious by the BBC series, which Edmonds-Green, despite his tender age, says he has watched.

Both hailing from Peckham, it was through the beautiful game, at its purest, that the pair first met:

“How old were we?” says DJ, the older of the pair. “Young, playing round the corner from both of our houses at Burgess Park. A few of my mates used to go there and that’s how I met Rams through other people and playing together.

“We were always doing the same thing – just because of the places we went to, and the friends that we have.

“I used to look after Rams. Every time I used to see him, I would just say: “don’t get robbed!” I think I’m the reason that Rams is such a good defender because he’s played against me there so many times.”

“This guy’s all talk,” retorts Rarmani, shaking his head.

That’s the first mention of the area they grew up in. Peckham hasn’t got the greatest reputation, despite its comedic and nostalgic national notoriety. Tourism website, South London Club’s brief history of the borough says a bad rep still ‘lingers’, with this being traced back to the 70s when high unemployment and a lack of opportunities for residence led to the area’s decline.

Its status as somewhere to be feared is a cause of slight debate between the pair:

“It wasn’t a really dangerous area where we grew up,” says Jaiyesimi to which his defensive team-mate says: “It was rough.”

Red Review asks: “Is it made out to be worse than it is?”

“If someone who wasn’t used to it moved there, they’d probably think: this is outrageous. Because we were so used to it, it’s not a surprise to us really,” concludes Rarmani.

For many in those surroundings, football – or a talent of any kind – can prove to be the best route to ensure a better life rather than Delboy’s hooky street items.

However, the portrayal in many TV shows is that the area and the people around can drag you down into decisions that will have a negative impact on your future. For one of the league’s trickiest players, Jaiyesimi, the people around him told him to stick with it to avoid the disruptions of life in a deprived part of the world.

“You have people telling you that you don’t need to do anything but focus on football – it was a good distraction from what was going on around.”

One thing that both players have in common in their late teenage years was a breaking point – a decision as to whether to give up on the dream.

Despite several trials, by the age of 16, neither youngster had landed a place at an academy. And it wasn’t a case of this time next year, Rarmani… There was a realism to the attitude towards making it to the next step – not completely cushti.

Despite the verbal support of those around him, Edmonds-Green almost decided it was time to give up on the dream of playing professionally.

“At 16, not having a club, going on loads of trials and getting told no but everyone’s in your ear saying different things, saying you will make it. It gets to the point, though, where it’s nice to hear but nothing’s actually happening.

“You start to think: forget football.

“There was something in me that wouldn’t stop, though. My Mum had taken me all around the country to play football – that was the last bit of drive I had that kept me going.

For DJ, the support of his semi-professional side, Dulwich Hamlet was the driver that kept him in the game.

“I was thinking, at about 16 or 17, I’m going to stop playing football. I didn’t have a club and I didn’t think there was much point carrying on. I was at Dulwich and they’ve got very good role models there and they told me to stop anything else I was doing and focus on football.”

“They told me I’d get a move if I really applied myself properly.”

He did. And he got his move to Norwich, as did Rarmani after a very brief two weeks with the Nike Academy. Definitely a case of He who dares…

The transitions at that time of life, 16-18-years-old, always feel huge – most teens are experiencing the pressures of studying academically, applying for university or finding a trade, deciding what they want to do with their life. The changes in expectation, and professionalism, were a steep learning curve for DJ:

“I struggled with the transition. It’s not like school where there’s discipline formally but you have to carry yourself in a certain way. I had trouble doing that.

“The professional game is more demanding because I went from Dulwich and training twice a week to twice a day at Norwich.

“In terms of playing, I was a good footballer but I didn’t really know how to play 11-a-side, really. I kind of struggled with that when I first joined Norwich. It was about knowing when to do stuff at the right times but I got the hang of it relatively quickly.”

Rarmani’s move to Huddersfield was a difficult kind of shift: a positional one.

“I went to Huddersfield as a midfielder. The Head of Academy was my coach at the time and a centre-half so he converted me a little bit and it was about mastering that role, not being able to play there.

“It was a lot more information. At Sunday League, amateur level you can get away with certain things. Academy football that doesn’t happen – extra sessions, training every day, that drills it out of you quite a lot.”

In terms of DJ’s playing style, cage football still remains routed in his style, albeit heavily adapted to the professional game, nowadays.

“It helped me a lot playing cage football. It means you express yourself without anyone shouting at you. It helped me do different things to try and get past someone.”

The pair are now at different stages, despite being at the same club – this is Raramani’s first loan compared to DJ’s third with the winger quite literally heading to Hull and back while on-loan near the Humber. However, the pair have found themselves in even closer quarters than their childhood.

They live together in Swindon and, according to Rarmani, the lionshare of the work around the house is done by the younger of the pair.

“Living with DJ, I have to cook for him, clean for him, tidy up every night.”

“What do you bring to the table? The mess!”

To stop a playful scuffle, Red Review intervenes and questions how much of a life lesson it is working with older pros, compared to the insular feel of an academy. 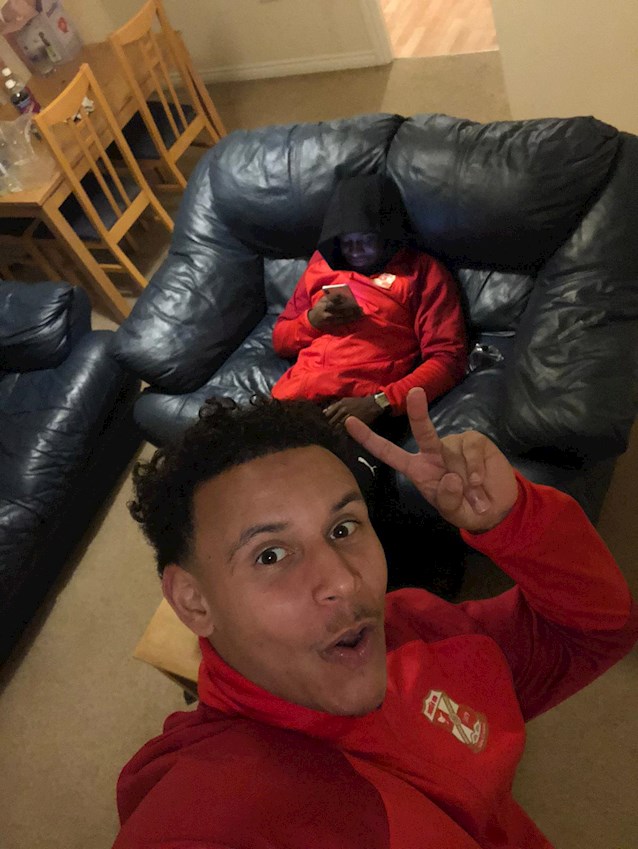 “You learn so many new things,” says Rams. “Hearing Doughts talk about working life is crazy for us – when you talk to under-23s team-mates it’s mainly about girls or something. Talking to Doughts about that or some of the Dads in the squad about doing the school run. You learn about life.”

Learning about life and excelling on the pitch, this pair of aces are loving their time on-loan at the Town.