Use the time you have wisely. Look back on the events of this week in Swindon's history:

March 23rd 1965 – Swindon sit just three points above the relegation zone in Division Two and joint-leaders, Northampton Town visit the County Ground. However, the Cobblers are given a hell of a second-half beating.

Ernie Hunt (2), Mike Summerbee and Don Rogers turn around a 0-2 half-time deficit and take all three points in front of 17,686 at SN1.

23rd March 1996 – Two goals from Peter Thorne and Wayne Allison ensure Swindon get back to winning ways at the County Ground as Town run out 2-0 winners over Peterborough United.

Allison strikes with a clever touch and volley before Thorne nods in at the back post off a Paul Bodin cross.

23rd March 2019 – Morecambe are taken to the cleaners by an in-form Town side. Loanee Theo Robinson nods in the first before Kaiyne Woolery drills in a left-footed effort before the break.

Centre-half, Dion Conroy shows his attacking prowess with a fantastic chop and finish before Kyle Bennett rounds off the scoring from distance courtesy of a dodgy bobble in front of the Shrimps’ goalkeeper.

24th March 1988 – US midfielder, Roy Wegerle signs on-loan from Chelsea with a view to the move supposedly becoming permanent for a £100,000 fee. Wegerle plays seven games for the club and scores one goal in the final quarter of the 1987/88 season.

24th March 1990 – In an entertaining affair, Town twice come from behind to draw with Oxford United at the Manor Ground.

Lumbering centre-half, Steve Foster gets both of United’s goals. Steve White equalises to make it 1-1 after 38 minutes before Foster’s second before the break. Paul Bodin steps up from the penalty spot after White is brought down on the edge of the box.

24th March 2009 – Sixfields has seen many famous Town moments over the years and Simon Cox’s hat-trick is certainly up there with the best of them. In a thrilling affair, Cox takes the game by the scruff of the neck and gets his third treble of the season as Town win 4-3..

Adebayo Akinfenwa (or ‘the Beast’) opens the scoring after three minutes before Cox replies 15 minutes later with a bundled header. His second is the pick of the bunch as he lobs Chris Dunn from 25 yards. Billy Paynter extends the Robins’ lead after scampering clear and showing a cool head to dummy the defender and finish past Dunn. Danny Jackman halves the deficit with 20 minutes to play with a free-kick before Cox chests in Paynter’s cross meaning Ikechi Anya’s late strike is nothing more than a consolation.

25th March 1986 – Fraser Digby is loaned in from Manchester United by Lou Macari. Despite not making any appearances during the 85/86 season, Macari signed him permanently in the summer handing him his debut in September that year.

Christian Roberts and Corr, on his debut, turn the game around in the first half after Mark Stallard’s opener for the Imps. Peacock pops up with a goal to make it 3-1 before Stallard strikes late meaning a nervy end. Paul Sturrock’s Robins see it out and win 3-2 creating a healthier gap over the Lincolnshire side.

26th March 1994 – Jan Age Fjortoft gives Swindon a shock lead against Blackburn Rovers in the Premiership. The Norwegian scores four minutes in with his eleventh goal in ten games. However, Blackburn strike back three minutes later through Alan Shearer. Tim Sherwood gives the home side the lead before Shearer completes the victory ten minutes from time at Ewood Park.

27th March 1988 – Tim Parkin gets a late leveller as Town take on Crystal Palace at the County Ground in Division Two.

The lethal combination of Ian Wright and Mark Bright give Palace the lead in the second half with a four-minute double salvo after Steve White gives the Town the lead. Parkin’s equaliser means a 2-2 at the County Ground with 12,915 in attendance.

Miles Storey gets the first in a 2-1 win after 18 minutes with a delightfully curled finish. After Michael Doyle equalises just before the hour mark Wes Foderingham makes a stunning save to keep the scores level before Town race up the other for Thompson so steal all three points. 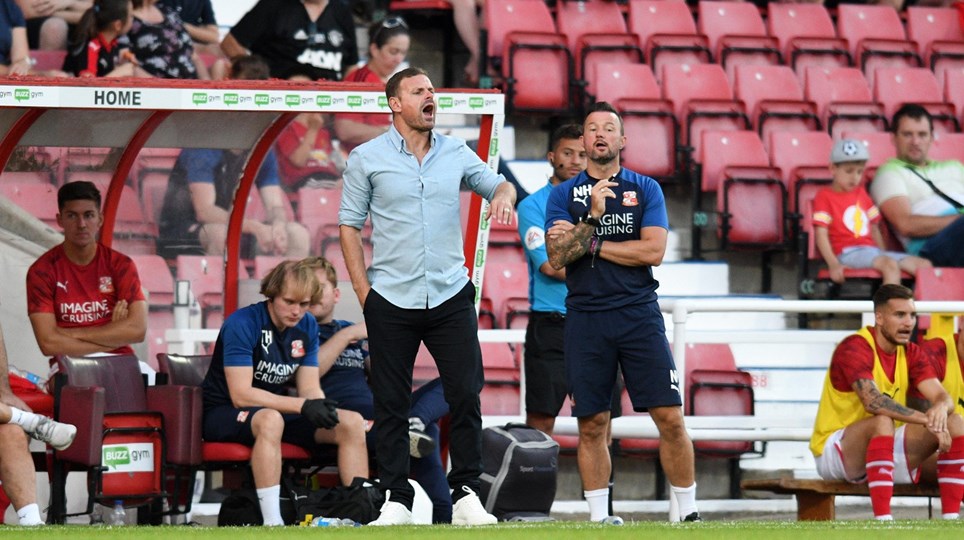 WELLENS: WE'RE GOING TO START WORKING ON THE SMALL THINGS


Richie Wellens wants his side to start sweating the small stuff after a pre-season of long, hard running so far.