Town showed resilience and late heroics to earn their first away point at Shrewsbury Town last Saturday, with goals from Joel Grant, Hallam Hope and Matt Smith helping the Reds come back from 3-1 down to draw 3-3.

It was a much-needed boost for the Town who have endured a tough couple of weeks, losing to Darlington in the first round of the FA Cup and seeing manager Richie Wellens leave to join Salford City.

However, with the late victory against Forest Green Rovers in the Papa John's Trophy and the dramatic fightback against Shrewsbury Town, it appears the Reds have put the cup exit behind them.

Accrington Stanley will present very different opponents and have enjoyed a good run of form recently, winning four out of their last five matches in all competitions.

Last Saturday, John Coleman’s side also grinded out a 1-0 away victory against Northampton, so will come into the contest with a lot of confidence.

They are a strong, well organised side who have the joint best defensive record when it comes to teams outside the top six.

Counter-attacks are where they are at their most deadly, and this was evident in their 2-0 victory against current table toppers Peterborough in their first game of the season.

Only third place Ipswich have beaten them in the last five games, however, like Swindon they were also knocked out of the FA Cup in the first round losing 2-1 to Tranmere Rovers.

However, while Stanley are currently nine positions above Swindon, only five points separate the two sides in the division with the bottom-half of League One looking very tight and competitive.

This evening's referee will be Tom Nield with Joseph Stokes and Paul Stonier as assistants. Carl Brook will be the fourth official for the match. 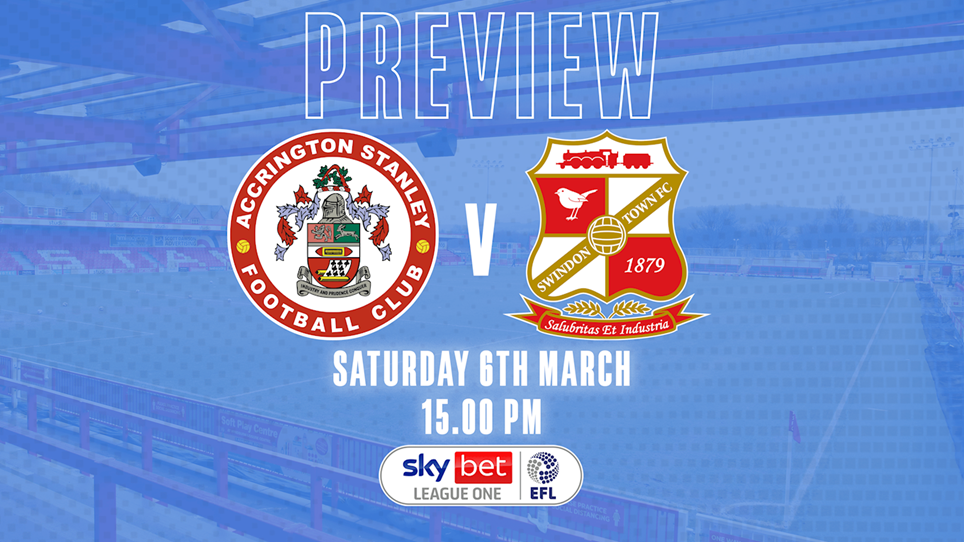 
A second away match in a row takes Swindon Town to Accrington Stanley, where The Reds will be looking to avenge a painful home defeat earlier in the season.


A cross-country trip to East Anglia beckons for the Reds, as they take on promotion hopefuls Ipswich Town in the first match of 2021.


A second away match in a row takes Swindon Town to Accrington Stanley, where The Reds will be looking to avenge a painful home defeat earlier in the season.


The Reds take on familiar domestic rivals Northampton Town in a what is a proper six pointer at The County Ground.


Swindon travel to the LNER Stadium to face League One leaders Lincoln City this evening.