Town fell behind against the run of play after Keane Lewis-Potter showed pace and composure to beat Matej Kovar from 20-yards out, but the Reds reacted superbly to falling behind.

Caddis smashed the Reds level after a fantastic quick corner from Jonny Smith, while Hallam Hope found Joel Grant with an inch perfect pass for the striker to score the crucial winning goal at the beginning of the second-half.

After a barren run of five consecutive defeats for the Reds, this hugely important and impressive victory has come at the perfect time just before the crucial trip to face Plymouth Argyle next Tuesday.

Swindon had most of the ball in the early stages of the game and forced the contest’s first clear chance of the game.

Dion Donohue found himself some space on the left-hand side and drilled the ball into the middle; finding Hallam Hope who got across his man but unfortunately also got the ball caught up in between his feet.

Despite the bright start for the Reds, it was the Tigers who scored the first goal of the game.

Keane Lewis Potter received the ball in between the midfield and the defence and drove into the defence while holding off Jonny Smith, before placing the ball into the bottom right hand corner.

Swindon were not undeterred and created a good opportunity soon after.

Jonny Smith cut inside on the right-hand side, after some good work from Caddis and his shot was only just deflected over for a corner.

On the 30-minute mark Swindon’s positive reaction was rewarded with an equaliser.

Jonny Smith channelled his inner Trent Alexander Arnold and caught Hull napping with a quick short corner to Paul Caddis, and the Scot made no mistake with the finish, smashing a shot into the top corner of the underside off the crossbar.

Smith nearly turned goal scorer one minute later, with an instinctive volley on the turn from a Jack Payne shot which was deflected into the air, but his effort just floated over.

Town did not stop there and came within inches of giving themselves the lead before half time.

Some more strong running and wing work from Jonny Smith, culminated in the Bristol City loanee, whipping in a tantalising low cross which Hope was painfully close to tapping in at the back post.

Smith was a constant menace on the right-hand side and would’ve grabbed his third goal in a Swindon shirt if it wasn’t for some smart goalkeeping from Tigers’ keeper Matt Ingram.

Some more great combination plays from Caddis, Smith and Jack Payne finished with Smith bending a swerving shot into the far corner, which Ingram only just touched away to safety.

Hull held firm to go into the second-half level, but it was the Town who went into the break as the stronger side.

Town looked to have maintained their momentum from the first half and immediately looked dangerous on the counterattack.

After some promising crossed which were only just kept out by the Hull defence, Swindon had the goal they deserved.

A fantastic, free flowing team move concluded in clinical fashion as Joel Grant got in behind the Hull defence, controlled the ball and majestically fired a low half volley into the bottom right hand corner.

In what would be his final contribution of the match, Tom Eaves held of Jonathan Grounds, brought the ball down and shot on the spin, but Kovar safely gathered the ball low to his right.

Swindon did suffer a scare as Hull substitute Josh Magennis headed the ball from a free-kick from close range, but fortunately the assistant referee held up his flag to the relief of the Town.

The Tigers, recognising they were in danger, began to pile on the pressure on the Town with some dangerous crosses and deliveries from both sides.

Lewis-Potter looked like he was going to score his second of the game when he found himself on the 18-yard box with nobody around him, but Anthony Grant flew in out of nowhere and blocked his effort.

Determined and heroic defending was in abundance in front of the Town end, and Swindon held firm to secure what could be a vital three points this season. 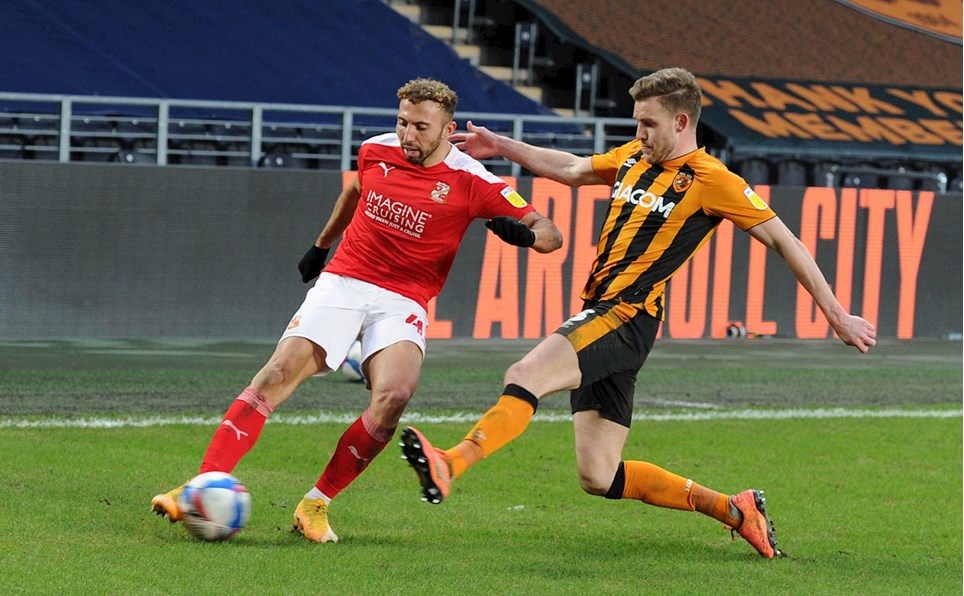 
Town suffered their first away defeat of 2021 to now league leaders Hull City, following a 1-0 defeat at the KCOM Stadium.