Swindon Town couldn't mark the first home game of the 2021-22 season with a win after falling just short in a 2-1 defeat to Carlisle United this afternoon.

Despite producing a battling performance, the Reds were unable to muster up three points in-front of a bumper crowd at The County Ground as the visitors sneaked away with a win.

Town got off to a slow start in the first-half and they were punished as Joe Riley beat Jojo Wollacott with an impressive long-range effort.

Respond the Reds did, however, and they drew level thanks to Romoney Crichlow's first goal for the club, although United did have the lead at the break after Tristan Abrahams finished from close-range.

Town put up a much better showing in the second-half and they piled on the pressure in the closing stages of the game, but they were just unable to find an equaliser as they fell to defeat for the first time in the EFL Sky Bet League Two this season.

Head Coach Ben Garner named a strong Starting XI for the visit of the Cumbrians, although new addition Jonny Williams signed past the registration deadline so was unable to feature.

With a packed County Ground creating an electric atmosphere, Town got off to a positive start as Tyreece Simpson sent a header over from a Kaine Kesler-Hayden cross, before Harry McKirdy dragged a shot wide as he looked to hit the target against his former team.

Carlisle hit back though as Jojo Wollacott had to make a superb stop to deny Tristan Abrahams, but Wollacott was powerless as Joe Riley unleashed a great strike from 23-yards out that flew into the corner to give United the lead.

Town had a couple of decisions go against them while Carlisle felt they should have had a penalty after Brennan Dickenson went down inside the box, but nothing was given.

And, with 30 minutes played, the Reds hit back thanks to a brilliantly worked set-piece with Louis Reed floating a free-kick inside the box, Dion Conroy sent a beautiful header back across goal and Romoney Crichlow was on hand to bury the ball in the net for his first Town goal. 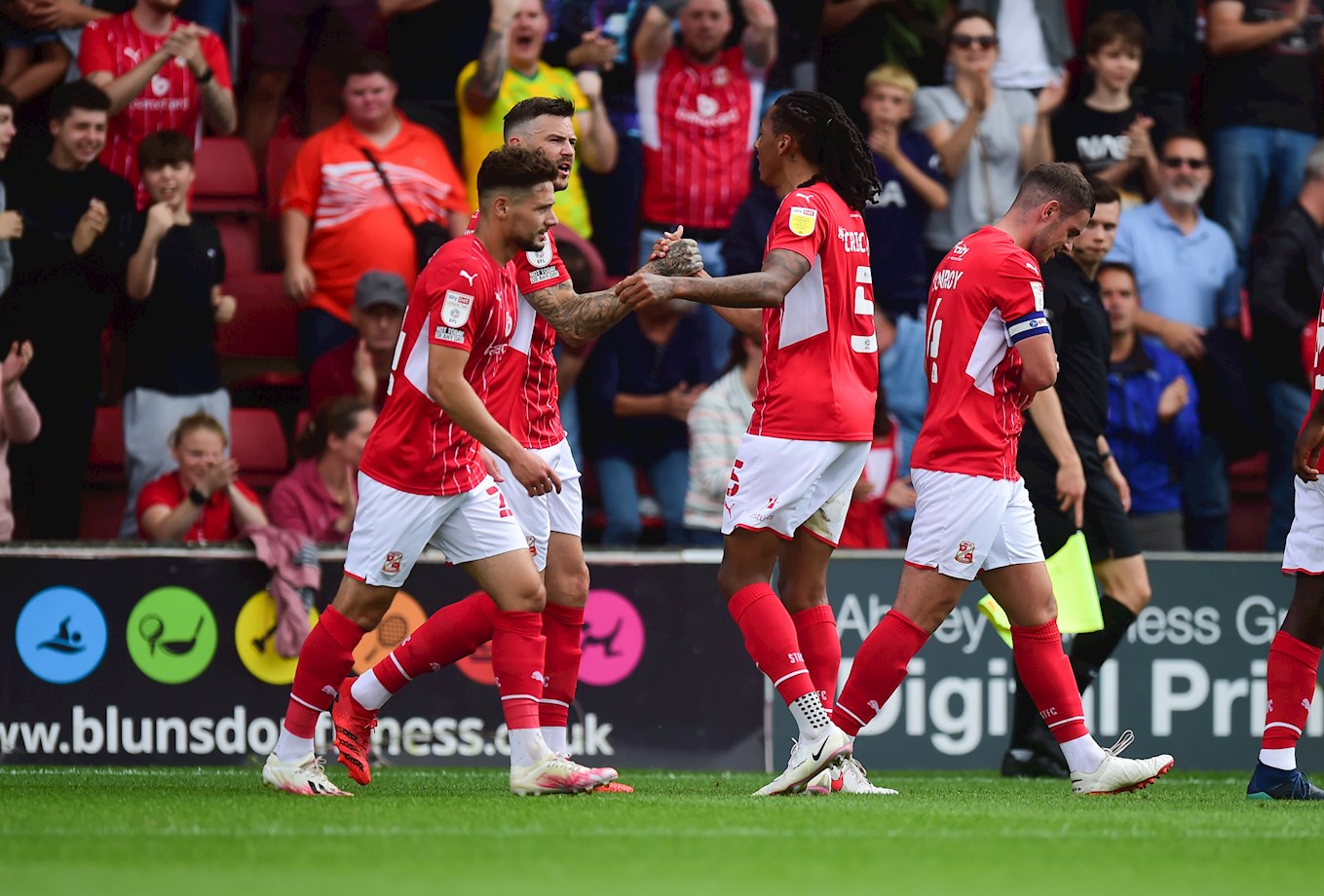 Carlisle responded as Riley tried his luck again but his strike was easy enough for Wollacott to deal with, before Ben Gladwin tested Magnus Norman with a powerful strike from distance.

Town looked to be in a good place heading in at the break but, as was the case for the majority of the first-half, they failed to deal with a long throw into the box as Riley's huge throw was flicked on by Rod McDonald and the ball fell to Jon Mellish who forced a sublime point-blank save by Wollacott, but Abrahams was on hand to slam home the rebound.

It was a crushing blow given how well the Robins did to claw their way back into the game, and Carlisle were doing a good job of preventing the hosts from playing their preferred brand of football.

With a huge crowd cheering them on, Town were much better in the second-half although they survived an early scare after McDonald nodded wide from a corner for the visitors.

Jack Payne tried his luck for the Reds but his shot lacked any real power, while Kaine Kesler-Hayden was proving to be a real threat all afternoon as he was at the heart of everything good Town were doing and he had a couple of good chances early in the second-half.

Simpson was next to try his luck for the Reds as he cut in and tried his luck, but his shot took a deflection and it proved no trouble for Norman.

Ellis Iandolo came on to replace Rob Hunt at the hour mark and, despite taking a knock following a collision with Norman, the versatile utility man dusted himself off and proved to be a real spark for Town.

Kesler-Hayden sliced a shot wide following a brilliant piece of play by McKirdy, before youngster Harry Parsons came on to replace Ben Gladwin with 78 minutes played.

McKirdy fed in Payne who couldn't get his shot on target, and then Parsons came so close to drawing Town level as he forced Norman into a fine save with a cracking strike. 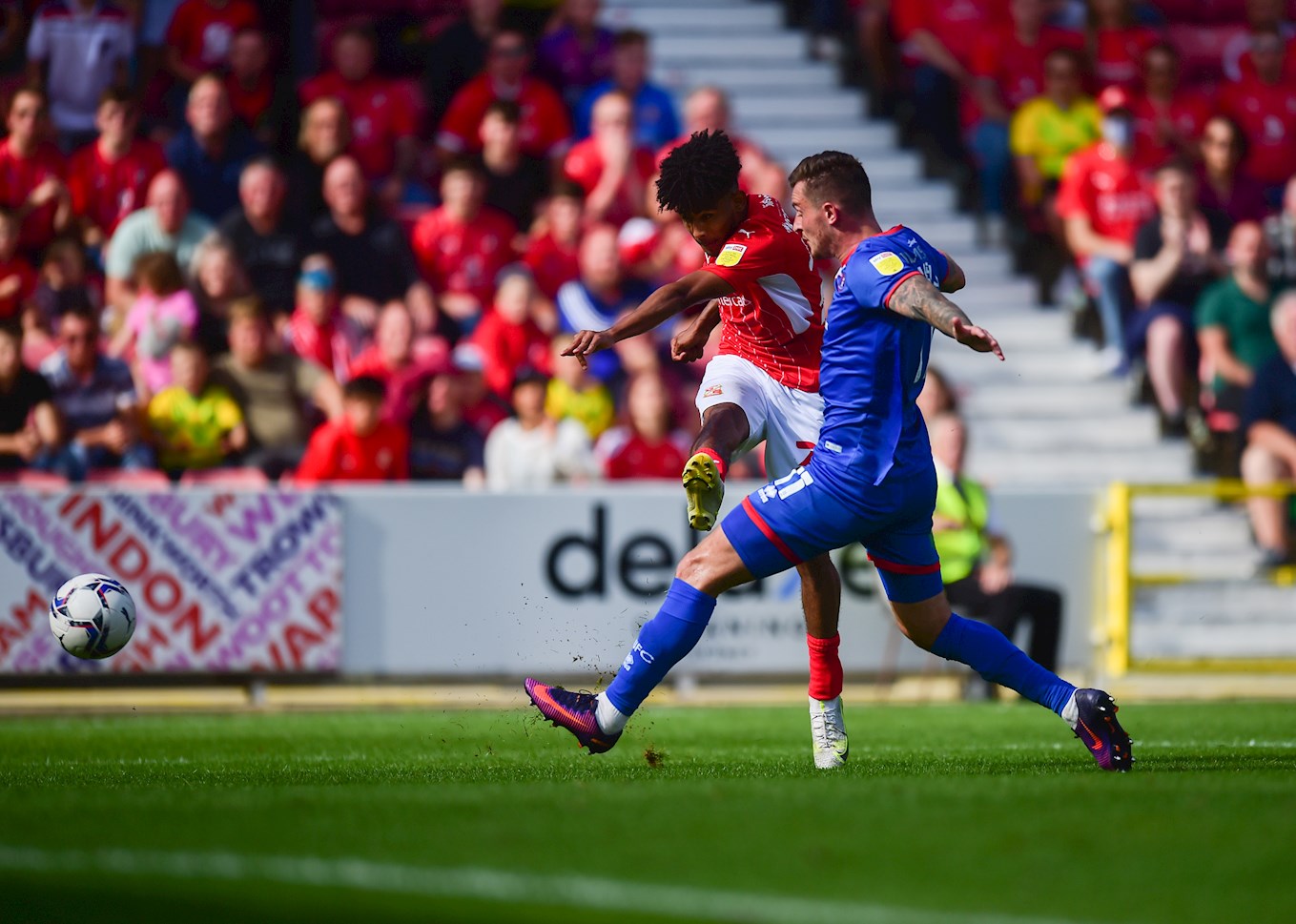 Town were really pressing and were fighting until the very end as they were giving everything they had, and they nearly got their just rewards in the final minutes after Kesler-Hayden sent a shot across goal that had beat Norman, but McKirdy could only slam the rebound into the side netting.

McKirdy then scuffed a shot wide before frustrations were compounded after the hugely-impressive Kesler-Hayden was harshly shown a second yellow card for taking down Manasse Mampala, and it brought a frustrating afternoon to a close for the Reds.

Despite suffering their first loss of the season in the league, however, it was a real gutsy display by Town as they responded well to adversity throughout and they were unlucky not to come away with a point.