Brett Pitman's goal just before the half put Town in the driving seat, looking to hold on for the lad's first win since Northampton back in February.

A second-half brace from Vadaine Oliver and a deflected free-kick from Skipper Kyle Dempsey secured the Gill's three points.

Both teams looked to get off to a slow start with neither keeper really troubled in the opening exchanges.

Town’s first real half-chance came in the form of a free-kick in from Paul Caddis, deep into the Gillingham box. The cross was met by Broadbent, but his effort not enough to challenge Bonham in the Gills’ net.

Jordon Garrick showed great pace throughout the opening minutes and the lads nearly got their reward when he rolled back to Caddis, whose cross in was met by a Scott Twine overhead kick.

Unfortunately for Twine, he didn’t quite catch it properly and again Bonham was not tested.

Play was stopped momentarily when Caddis and Stuart O’Keefe clashed heads just outside the Gillingham box. O’Keefe had to leave the pitch following treatment, but was imminently back on the field.

With four minutes to play until the break, it was Town who struck. A great attacking passage ended with Jordan Lyden finding Brett Pitman with a few defenders around him.

Pitman’s controlled finish took him away from the Gillingham bodies and his composed finish found the bottom right corner.

After looking relatively comfortable following the break, Town were undone by the visitors from a set-piece.

The substitute striker headed onto the crossbar, leaving Vadaine Oliver with a simple finish to get the game back ion level terms.

Four minutes later Gillingham took the lead when Oliver took the ball round an onrushing Trueman and finished from a tight angle.

With twenty-one minutes remaining Gillingham extended their lead even further when Dempsey’s free-kick took a deflection of a Town body and found it’s way into the net.

Oliver had a chance to secure the hat-trick when he headed a cross just over Trueman’s bar.

It then looked to be the last roll of the dice to salvage something from the game when Town made five substitutes, with Curran, Odimayo, Iandolo, Payne and Tyler Smith replacing Conroy, Broadbent, Thompson, J & A Grant.

With twelve minutes left, one of the substitutes in Tyler Smith nearly got the lads back into the game, but his strike was well blocked by Bonham.

Twine also went close with a free-kick, which whistled past the upright.

The lads have now gone four without a win and head to Highbury Stadium next Saturday to face Simon Grayson’s Fleetwood Town. 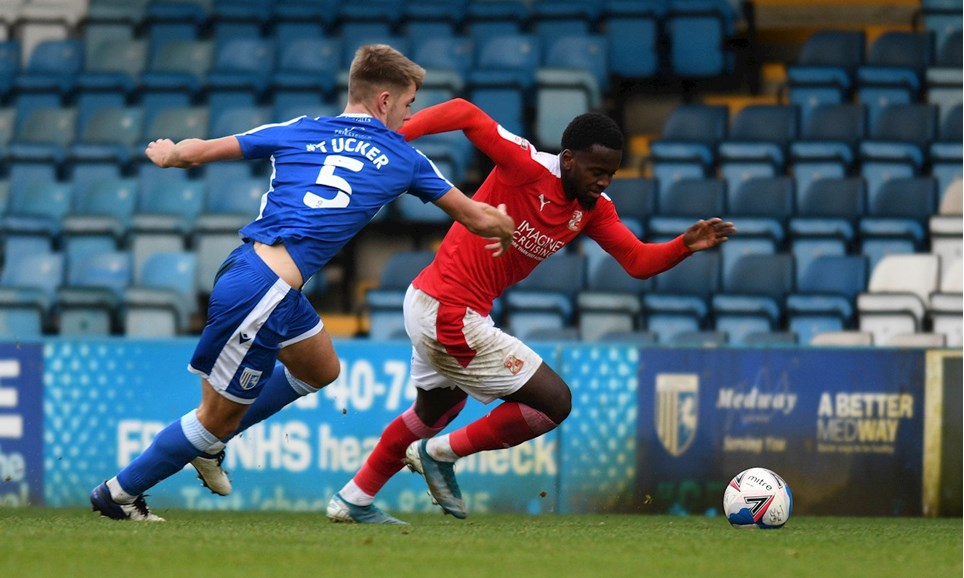 
Goals from Vadaine Oliver and Trae Coyle gave Gillingham three points in a game that was very even and perhaps didn’t entirely reflect in the scoreline.