A performance that First-Team Head Coach, Scott Lindsey, labelled outstanding saw Swindon pick up their first point of the new season despite going down to ten men just before half time.

But Town responded in fine style in the second period to create some of the best chances of the game, and the score line could have been very different had Swindon not had two penalty appeals turned down either side of the break and for a man of the match performance from goalkeeper Sol Brynn.

In what proved a slow start to the tie at SN1, it was the visitors that created the first chance with Brynn called into action on seven minutes to dive at the feet of Callum Hendry after the ball bounced around in the area from a Salford corner.

A few minutes later, referee Woolmer awarded Harry McKirdy the first yellow card of the day for dissent – with two more coming in the space of four minutes for Town as Mathieu Baudry and Tyrese Shade went into the book.

On 25-minutes, Woolmer was called into action again as he turned down penalty appeals from Harry McKirdy, who claimed he’d been dragged down in the area, only to leave the striker disappointed as play continued.

Two minutes later, Salford created their first clear chance of the game, as Callum Hendry found himself on the edge of the box in space, but Conor McAleny dragged his shot wide from the resulting pass.

Ben Gladwin then threatened at the other end with a long range effort that cleared the crossbar, before McAleny wasted another good opportunity as he miscued a shot after good work from Luke Bolton to pull the ball across the box.

The game was then turned on it’s head two minutes before the break, as what appeared to be a rather innocuous coming together between McKirdy and Ryan Watson saw the striker shown a second yellow and sent off. 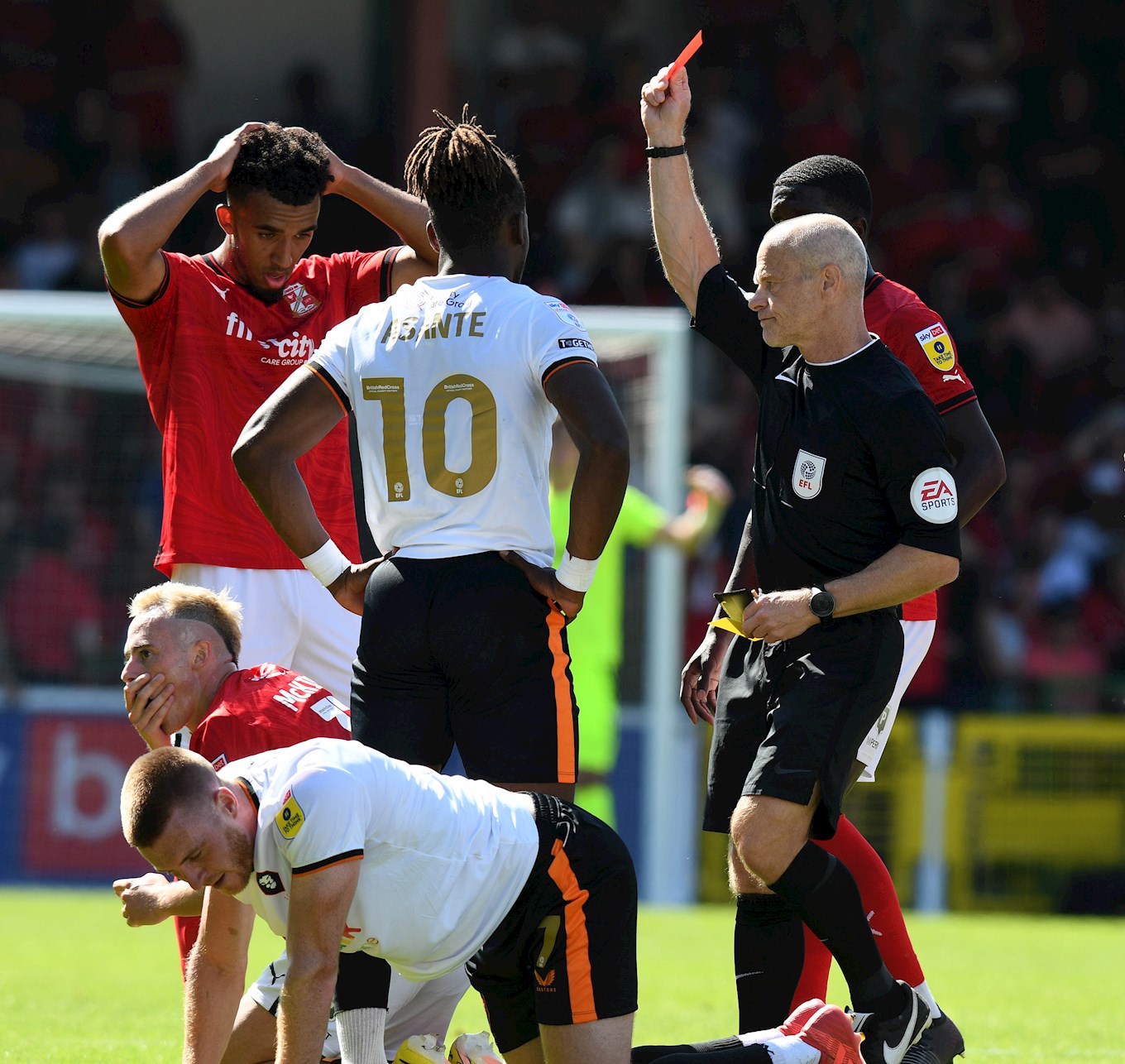 The visitors created two good chance before the half time whistle in the space of just a couple of minutes, as Luke Bolton stung the fingertips of the impressive Sol Brynn as he parried his powerful effort wide, and his acrobatics were tested again in stoppage time as Watson tried his luck from the edge of the area.

The second half saw Scott Lindsey make a double change as Ronan Darcy and Tom Clayton entered the field in place of Tyrese Shade and Ciaran Brennan, and Town burst into life.

Substitute Darcy struck one narrowly wide from distance, before Jacob Wakeling came agonisingly close with a header that just shaved the post.

Two further yellow cards ensued as Louis Reed and Luke Bolton entered the book, before Sol Brynn pulled off an incredible save to tip over Callum Hendry’s first time, downward volley inside the box.

It was then Ben Gladwin’s turn to try his luck, but he was unable to get much power on his shot after a loose pass from Salford stopper Tom King presented him with a chance.

However, his goalbound effort was blocked by defender Richard Nartey, but the keeper atoned for his error by making a fine save from Tom Clayton after the defender had found space for an effort after City failed to clear a Town corner.

Ronan Darcy and Angus MacDonald went into the referees book before Tomi Adeloye and Jonny Williams were brought on to steady the ship.

Town stood firm in the remaining ten minutes as Salford looked to snatch a later winner, but Brandon Thomas-Asante was denied by Brynn, while Callum Hendry and Elliott Watt put shots high and wide.

A good point for Swindon in a game they could have ended up winning, but Scott Lindsey’s side are off the mark with their first point, and will now turn their focus to the Carabao Cup as they travel to Walsall on Tuesday night (7.45pm).