Swindon Town Head Coach Ben Garner was full of praise for his players in the wake of the impressive 5-0 win over Walsall at The County Ground on Tuesday night.

The Reds picked up their third straight Sky Bet League Two win last night thanks to a mouthwatering attacking feast of football.

Louie Barry and Harry Aguiar put Town firmly in the driving seat at the break, and both players scored again in the second-half before Jonny Williams put the seal on a memorable night.

And, in the wake of the game, Garner sat down with the local media to give his thoughts on the win, the performance and much more...

"I thought we finished the first-half strong and got a good goal and I thought we posed a real threat and didn’t quite get the decision right or that execution right in the positions we got into, and then we did.

"We got a great first goal, a brilliant second goal. We just adapted one or two things slightly at half-time. Huge, huge credit to the players in the second-half, I thought it was outstanding.

"We had a couple of moments of carelessness in the first-half, which presented them with opportunities. We ironed them out, in the second-half, there was none of that. I thought we looked really solid defensively and we just grew in confidence with the goals and had a really clinical second-half. 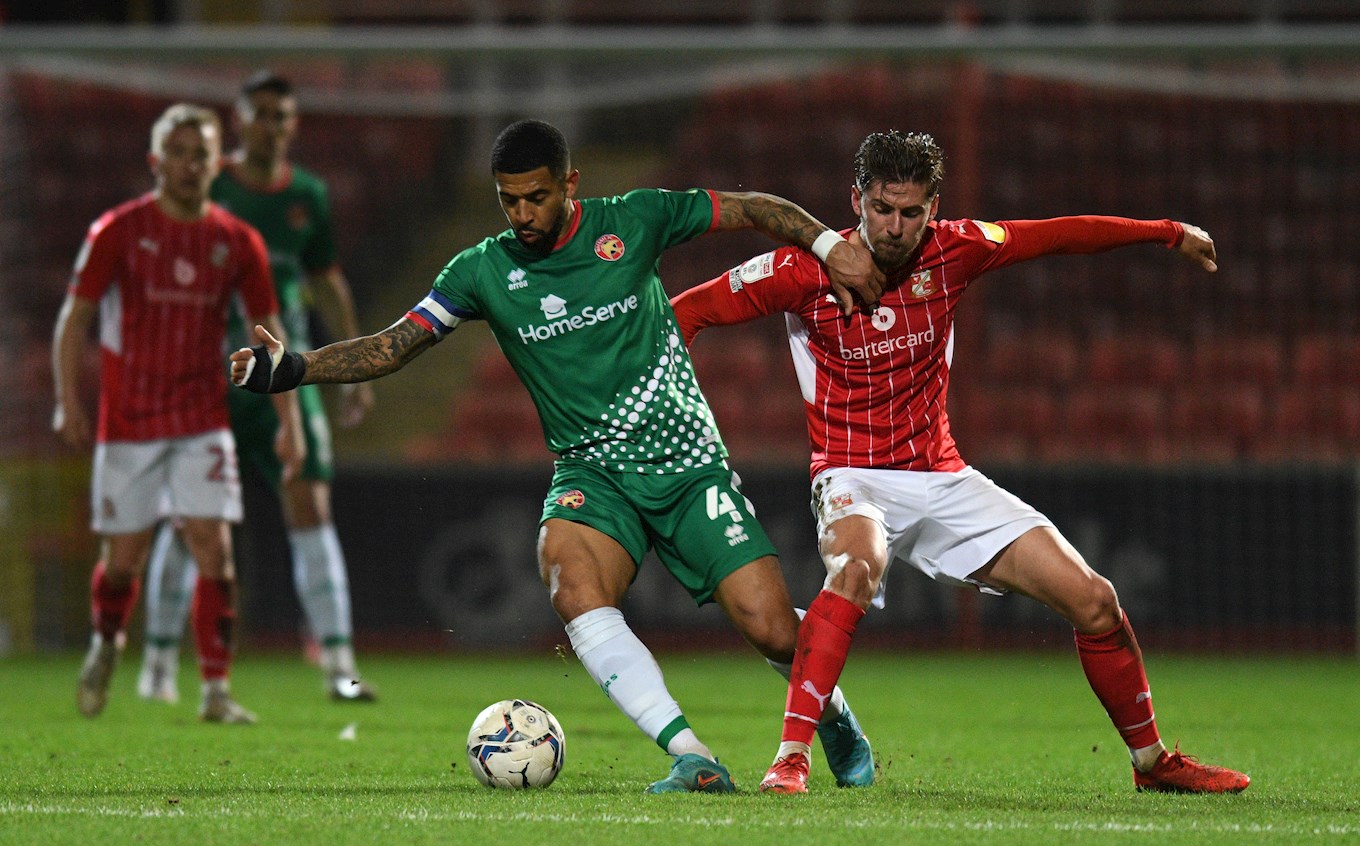 "We passed the ball really well and I thought our decision making throughout the game generally was good. We mixed it up in terms of the pace of the game and control of the tempo. Yeah, wonderful performance, but it’s three points, massive help to the goal difference, but it’s now onto recovery and onto Salford.

"I’m really pleased with the clean sheets, three on the bounce and I like the mentality of the players to see the game out. Sometimes you get a little bit careless, a little bit sloppy and go five up and give a sloppy one away.

"We didn’t do that, we were relentless and that’s a big foundation for us moving forwards and every time we go forward we look like a threat, we look like creating. Three on the bounce, we want to make it four on the bounce on Saturday, so we get straight back to work on Wednesday, we start preparing, we start recovering and we get our mind straight on Salford. They can enjoy that tonight, but by tomorrow morning, it’s on to the next game." 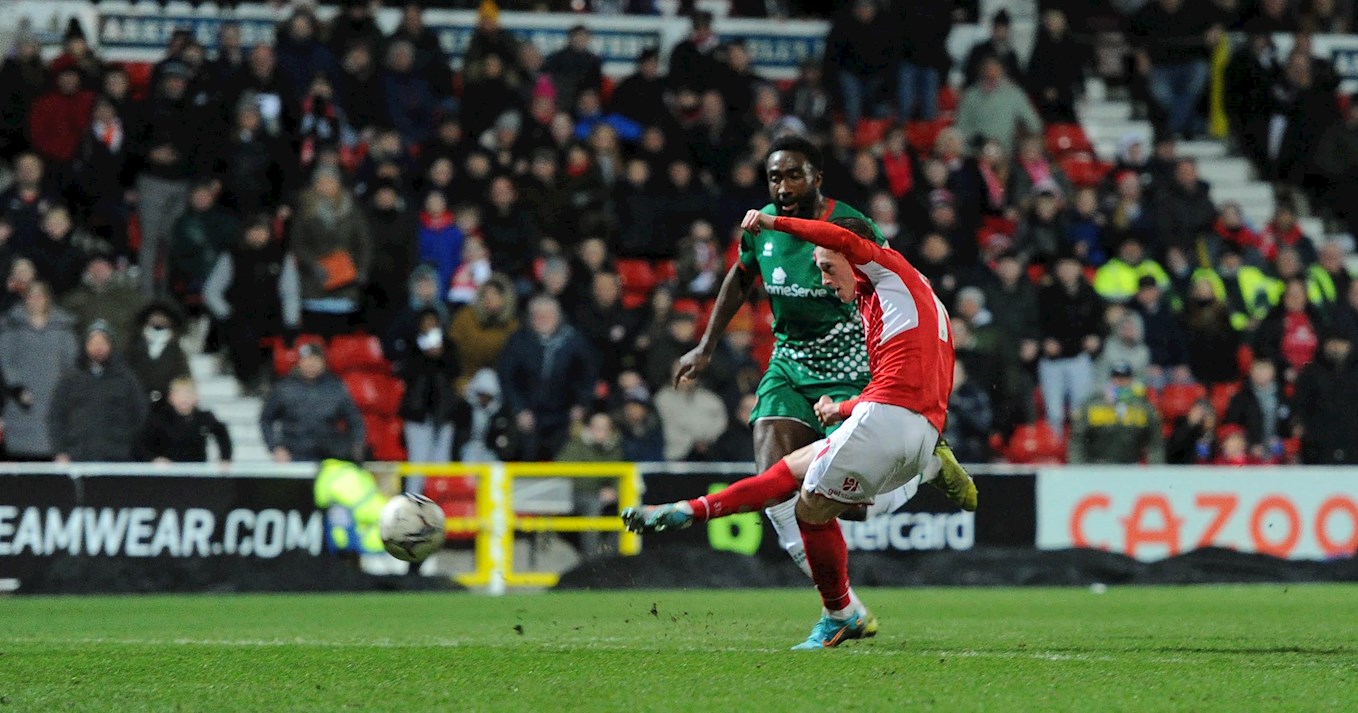 "Any goal that goes in is great with me, but there were some brilliant goals there, some great finishes.

"We possibly could have had one or two more. I liked the fact we kept going, we didn’t sit on it. We spoke about this a lot pre-Christmas - that mentality, that killer instinct sometimes - and we had that tonight, which was really really pleasing to see."

GARNER ON HIS TEAM'S BRAVERY...

"Yeah, we were always going to have that bravery and courage to play and it’s just getting that balance right with it of when to do it, when we’ve got the overload and when we haven’t.

"There’s one or two times there where we’ve thrown the ball out and it’s not on, and they’ve got numbers in the area and then now we’re under pressure. It’s a really young group starting the game, I think the oldest player is twenty-six starting that game. 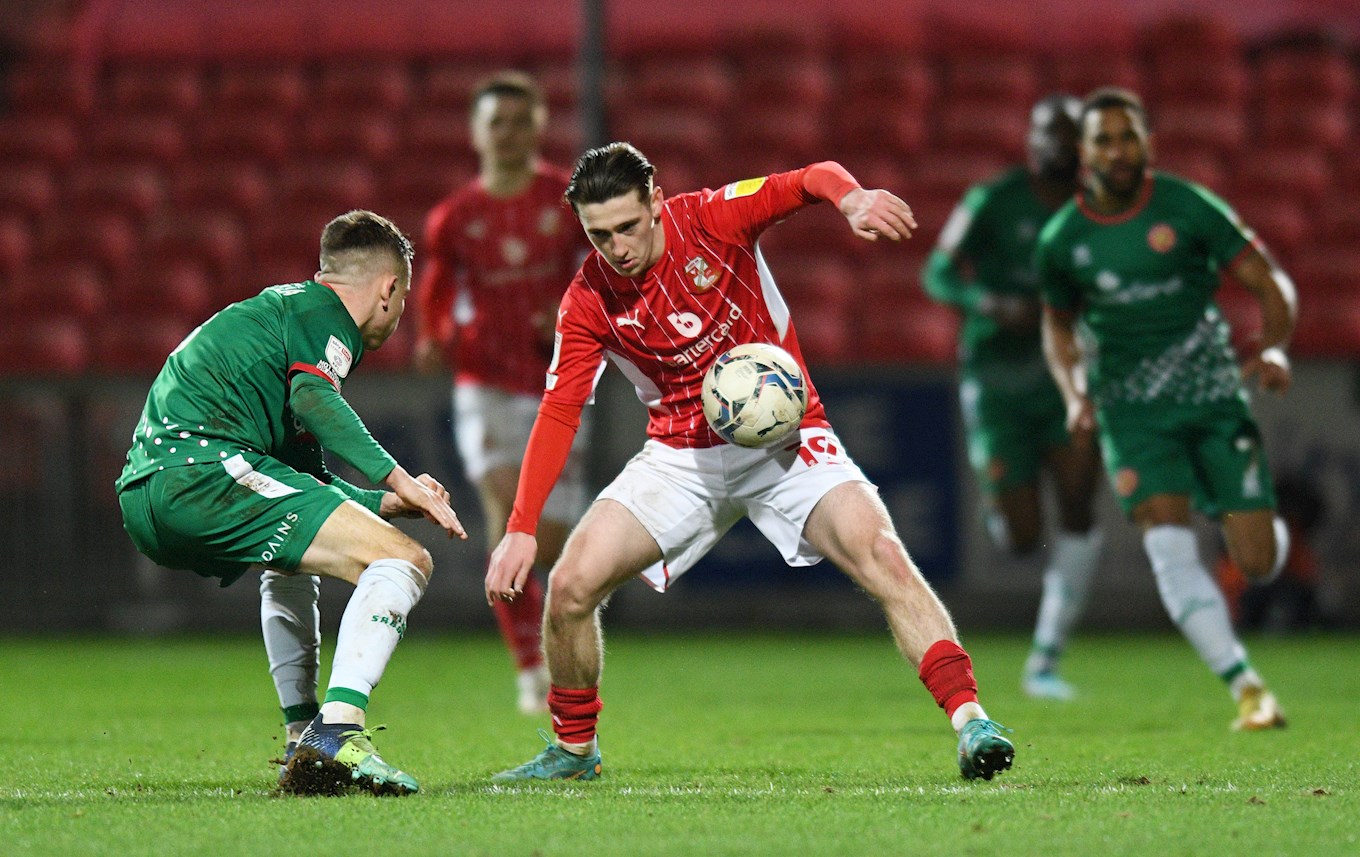 "Yeah, there’s been a massive change in him since he walked through the door. He’s grown in confidence with each passing day. The group have accepted him straight away, which I think is a massive help.

"He’s fitted in really well, worked well in training, wants to learn, wants to improve. Very coachable, very very coachable, takes things on. Tactically very intelligent. Yeah, the confidence of the goal at Carlisle and then these two finishes on Tuesday, for a young lad at eighteen-years-old to go in like that and show that composure is wonderful." 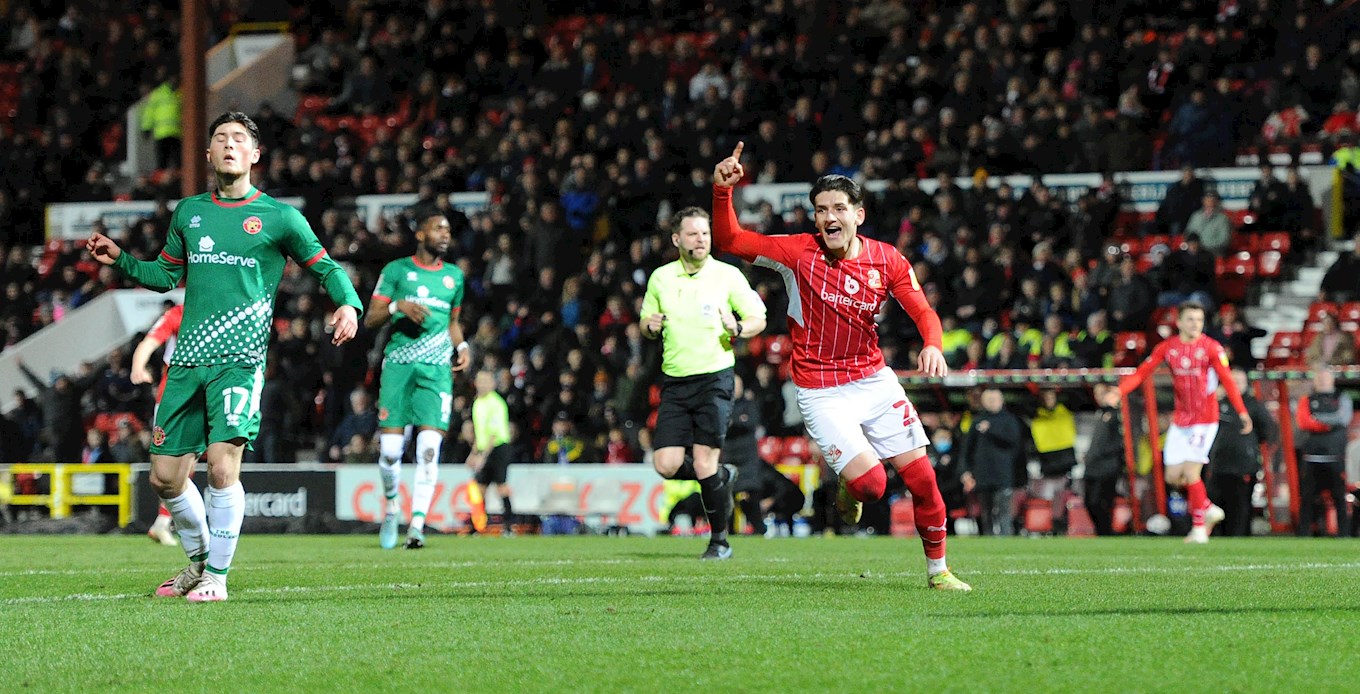 "Yeah well deserved, I think he’s been brilliant across the run of games he’s now had, and like I say, he’s another player who’s grown across the season. Coming to us from non-league and as I’ve said several times, he had a good loan, which was beneficial to him for his physical side of the game.

"I’ve said a couple of times he is quality, in and around the box he is fantastic and we saw that with the two goals tonight.

"He’s outstanding with his finishing off of both feet, twenty-five yards onwards, that’s the biggest strength in his game I would say. He had that, he’s added to it, he’s worked at it, but that was the attribute we saw in him bringing him in.

"He’s really worked hard in the other areas of his game too. You can’t have that and not be reliable. He’s had a good work ethic, he’s added strength and understanding to his game and he deserves all the credit in the world for doing that." 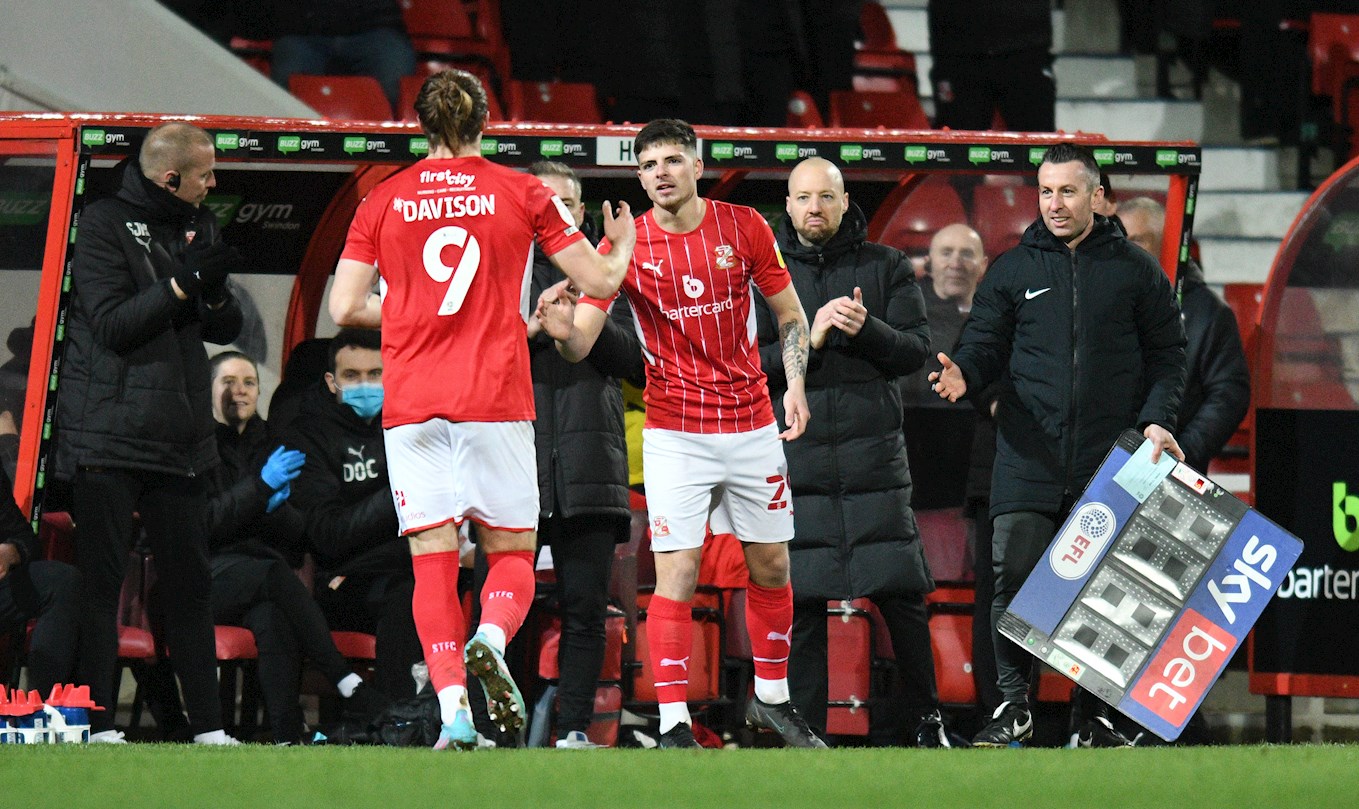 "Yeah, with Josh, he was excellent again. He’s looking so much stronger now after this run of games. Very good without the ball in terms of our press and setting us off.

"Very good when we’ve got the ball in terms of securing possession and I thought they were trying to jump their wing-backs to our full-backs first half and he gives us that ability to go into him and secure possession and then we can get movements and combinations off of him.

"Only thing that was missing for him on Tuesday was a goal because other than that it was an all-round brilliant, brilliant performance."