Swindon Town suffered their first loss under new boss Scott Lindsey, as they went down 2-0 at Swindon Supermarine in their second warm-up game of pre-season.

Despite dominating the majority of the game, Town were unable to find the elusive goals that could have seen them win comfortably, but a plucky Marine, who defended well in sweltering temperatures, struck either side of the half to record a memorable win at The Webbswood Stadium.

Much like their opening pre-season win over Melksham last weekend, Lindsey opted to experiment with his squad, fielding two different starting elevens either side of the interval, with the exception of goalkeeper Lewis Ward and a trialist.

There were minutes for the likes of Ciaran Brennan, Reece Devine, Louis Reed and Harry McKirdy, while Ben Gladwin was handed the captains armband to start.

The second half saw familiar faces such as Mathieu Baudry, Cian Harries, Tyrese Shade and Jonny Williams take to the field as Lindsey looked to give his first-teamers an equal share of valuable playing time.

Town started the tie the brighter of the two, with Harry McKirdy involved in pretty much all of the early exchanges with three efforts in the first eight minutes, but the striker was restricted to just long range efforts by the home defence. 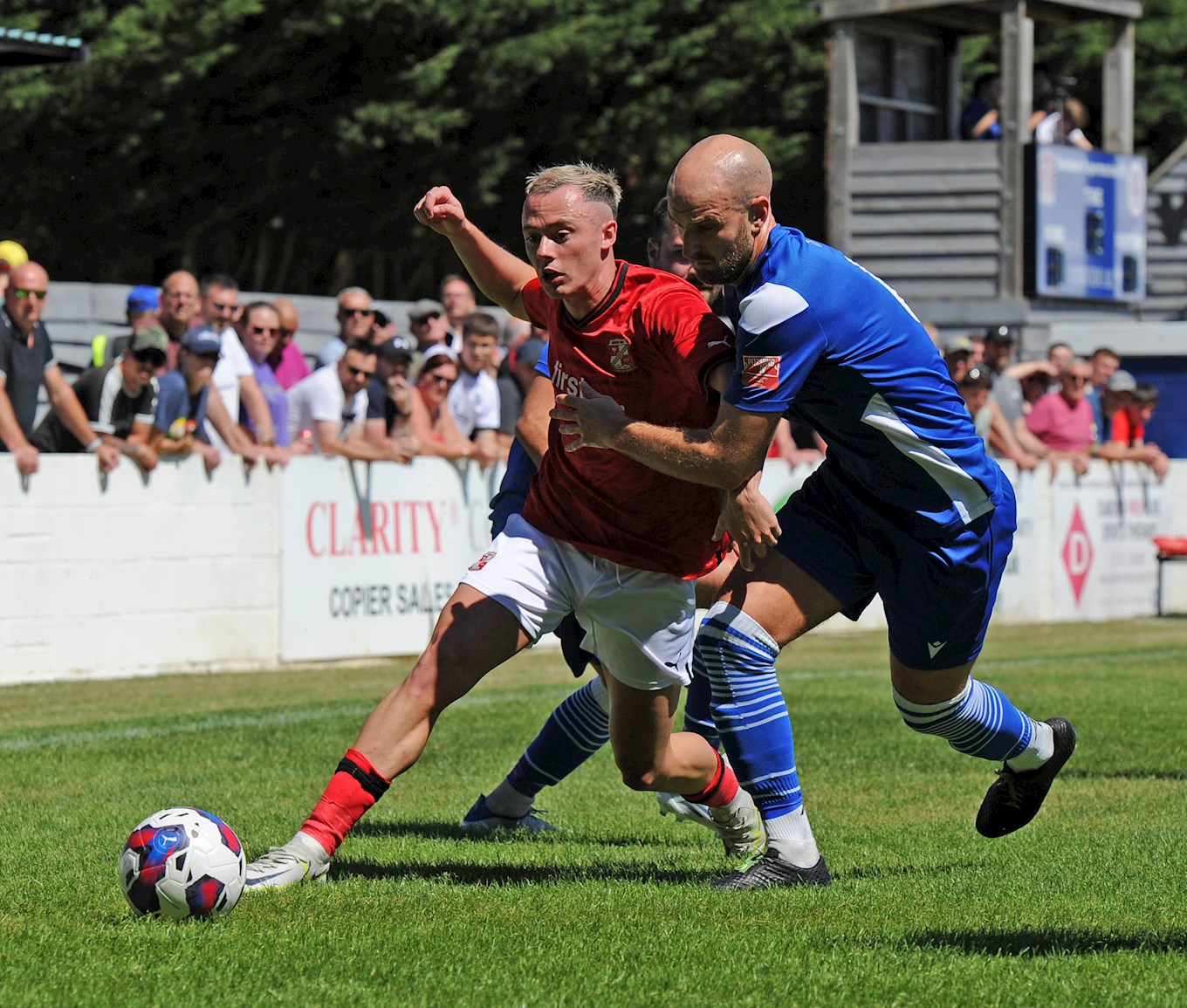 A few minutes later, Marine would create their first opportunity of just two they managed to carve out in the first 45, as Harry Williams struck a long range shot which was deflected wide.

The chances continued to come thick and fast for Town, with Louis Reed shooting narrowly wide after good interchange play with Ben Gladwin, before Reed fired over from a free-kick just outside the box minutes later.

Just before the half-hour mark, Harry Parsons flicked header sent McKirdy through on goal, but his run was halted illegally by Marine stopper Conor Johns just outside the box, resulting in a dangerous free-kick for Town and a yellow card for the goalkeeper.

Ben Gladwin stepped up to strike the resulting free-kick, only to put it narrowly wide of the goal.

The 30-year-old would come close moments later, twisting and turning before sending a low left-footed shot narrowly past Johns’ right post, before the home side broke the deadlock on 38-minutes.

A powerful drive from Ryan Campbell forced a good save by Ward in the Swindon goal, but he could only parry the ball back into the path of a Marine player who crossed low for new signing James Harding to tap home.

Louis Reed and one of our trialists came close soon after, but Town were unable to find the equaliser and went in a goal down at the break.

The second half began in frantic style with Lindsey staying true to his word by making nine changes, and Town’s new-look front pairing of Oscar Massey and Jacob Wakeling added a little more energy to the frontline.

Moments after the restart, George Cowmeadow forced an acrobatic save from Johns, before Baudry connected with a header from the resulting corner that was comfortably held by the stopper.

Just past the hour mark the home side threatened again as Ricky Aguiar failed to clear a Marine corner, but Ryan Campbell could only blaze high and wide with a half-volley just outside the box.

On 65-minutes Town had undoubtedly one of their best chances to draw level, as Oscar Massey was sent clear with just a defender and the goalkeeper to beat, but his low left-footed drive from a tricky angle was repelled well by Johns. 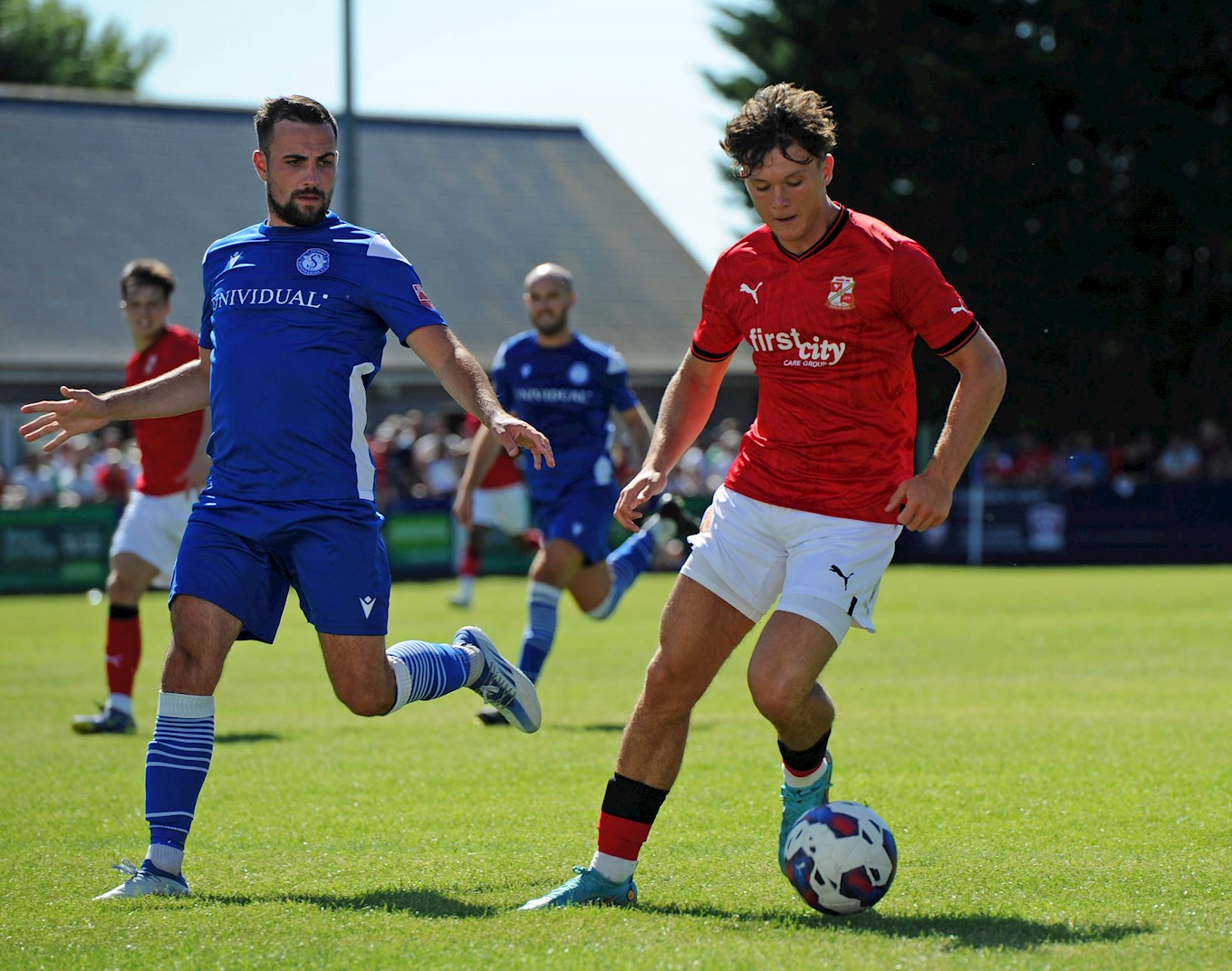 A hat-trick of efforts from Ricky Aguiar then ensued, with his last striking the foot of the post after good work from Jonny Williams to regain possession and a neat lay off by Shade, but still Town had nothing to show for their dominance.

Then, with six minutes of normal time remaining, Marine added the final sucker-punch by netting a second and effectively sealing the win.

Ryan Campbell was again involved as he crossed low from the left, catching Town’s backline asleep, and the ball was confidently struck home by one of their trialists.

A disappointing result for Scott Lindsey’s side but another good run out for his players as they look to slowly increase their fitness levels as the new campaign draws ever nearer.

Town head to Woking on Tuesday (12 July) in their next match, with the action getting underway at The Laithwaite Community Stadium at 7pm.