A brace from Harry McKirdy, an opportunist Jonny Williams strike and an impressive solo effort from Ben Gladwin saw a confident Swindon Town side ease past Woking at The Laithwaite Community Stadium in their latest pre-season friendly.

The performance of Scott Lindsey’s side was much improved from their defeat at Marine just a week ago, with each one of his charges playing their part in the four goal haul.

Town’s First-Team Head Coach chose to start a strong starting eleven, spearheaded by Harry McKirdy and Jacob Wakeling in attack, but it was the energy and flare of every one of his players that proved too much for the hosts on a humid evening in Surrey.

In what proved an action-packed first half, Swindon looked to take control of the game in the early exchanges with Louis Reed, Ben Gladwin and Jonny Williams seeing a lot of the ball and cancelling out the opposition.

It took just six minutes for them to create the first chance of the game, as Tyrese Shade beat his marker on the right wing to burst into the box, but his clever low cross was missed by everyone and easily cleared.

Ben Gladwin tried his luck from range moments later, before Jacob Wakeling came closest to bagging his first goal for the club on nine minutes.

A clever lofted ball into the box by Reed was headed goalward by Williams but narrowly missed at the far post by both the 20-year-old and the Woking goalkeeper.

Just a minute later, the hosts carved out their first chance with Padraig Amond bursting clear, only to be denied by the impressive Sol Brynn in the Swindon goal.

The Middlesbrough-loanee was called into action again shortly after, thwarting Amond once again to make himself big and smother the ball.

The deadlock was finally broken on 18-minutes though. Mathieu Baudry rose highest to head the ball clear from a Woking goal kick, and the ball looped over the hosts backline leaving Wakeling in the clear.

He selflessly squared the ball to McKirdy under pressure from a defender, and the striker jinked his way past two players on the goal line before smashing home.

Wakeling was involved in pretty much everything Swindon were creating, and only a fine save from Craig Ross denied him a goal after some loose play in the Woking backline.

But the 67 travelling fans didn’t have to wait long as just before the half-hour mark, Town doubled their advantage through Jonny Williams.

Tyrese Shade and McKirdy combined well on the right before the strikers initial snapshot was saved by Ross, but he could only palm the ball into the path of the Welshman who hit a looping first time shot into the net. 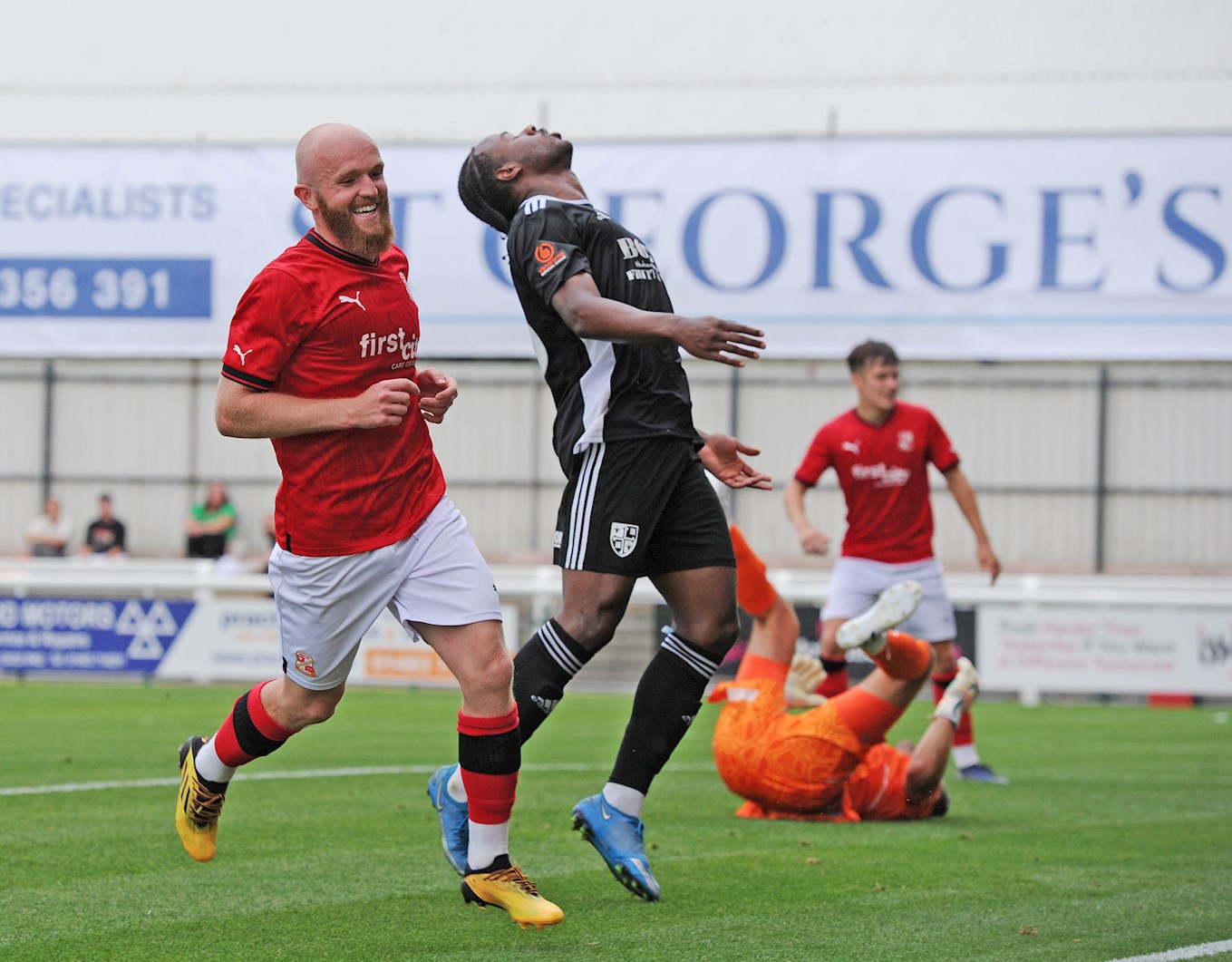 A comfortable two-goal cushion for Town at the interval, but it really should have been more.

A slower start to the second period ensued, but Woking’s early eagerness was finally overpowered on 54-minutes as Lindsey’s side added a third.

Ben Gladwin burst into the box after good interchange play with McKirdy, and the midfielder left his marker standing before rifling a thunderous shot in at the near post.

Woking did threaten to grab a lifeline on the hour mark as Ricky Korboa sent Rohan Ince clear through on goal, but once again Brynn was out quickly to deny him.

Lindsey made his first changes moments later, bringing on six players, including new signing Tom Clayton, who was only announced earlier in the day, but it didn’t take him long to make his mark.

As we reached the 70-minute mark, the former Liverpool man lofted a sumptuous long range through ball over the top which beat the entire Woking backline and left McKirdy to neatly lift the ball over the onrushing Ross.

With four goals bagged, Lindsey sacrificed a few more first teamers to give fringe players some minutes, but the game was all but over.

Anton Dworzak was denied by Ross, Ricky Aguiar missed narrowly from a free kick and a long range strike from Ricky Karboa saw the remaining minutes out, but a good display from Town away from home will certainly have pleased Lindsey, who will take his side to Eastleigh on Saturday.