Swindon Town were unable to start the new 2022/23 EFL Sky Bet League Two campaign with a victory as they suffered defeat at The EnviroVent Stadium to Harrogate Town.

A first half strike from Alex Pattison two minutes before the break gave the hosts a first half lead, which they extended six minutes into the second period through Matty Daly, before Jack Muldoon struck the third to earn the hosts all three points.

Six of Town’s summer signings were chosen by First-Team Head Coach Scott Lindsey to start the game, with Sol Brynn taking his place between the sticks and striker Tomi Adeloye partnering Harry McKirdy upfront, while recent recruit Angus MacDonald captained the side.

It was the hosts who created the first chance of the game after two minutes, with Alex Pattison crossing for Luke Armstrong, but the forward couldn’t get any power on the header and it was easily collected by Brynn.

Harry McKirdy was causing problems early on for Simon Weaver’s side with his energy and picking up the ball in good areas, and referee Tom Reeves awarded the first yellow card of the afternoon after just nine minutes as Warren Burrell caught the striker with a late challenge.

Moments later, Town came close with Ben Gladwin sending in a dangerous cross from the right hand side which Adeloye was unlucky not to connect with cleanly, before the home side had appeals for a penalty turned away by referee Reeves.

Pattison drove into the box and went down under pressure from duo MacDonald and Remeao Hutton, but play was waved on.

The best chance of the first half fell to Swindon on 25-minutes, as McKirdy rode several challenges on the edge of the Harrogate box, before the ball deflected into the path of the onrushing Jonny Williams, but the Welshman was just beaten to it by Peter Jameson in home sides goal. 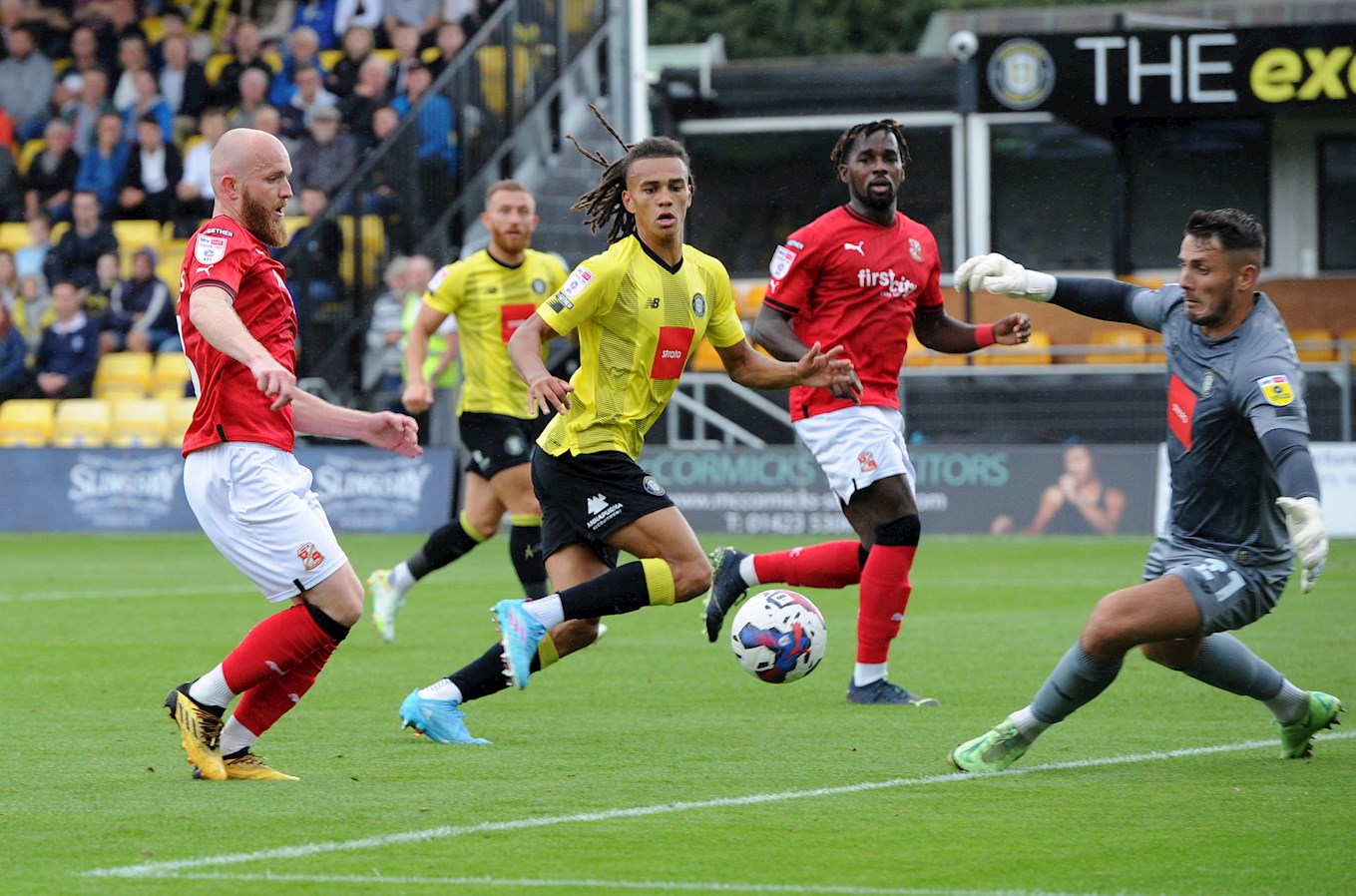 Stephen Dooley received the second yellow of the clash for a strong tackle on Ben Gladwin less than a minute later, before McKirdy tried his luck again with a snapshot on the edge of the area and was unlucky to see it sail wide of the right hand post.

With half-time fast approaching, Angus MacDonald almost had the Town fans celebrating the opener as Gladwin floated in a pinpoint cross from the right, but despite sneaking in between a defender and the keeper, was unable to direct his header on target.

The first goal of the game would arrive shortly after though. With Sol Brynn saving well from Pattison to push his close range effort out of play just seconds prior, the striker would make up for the miss as he struck a powerful shot into the roof of the net from the resulting corner with Town unable to clear their lines.

The second half started well for Swindon, and defender Mathieu Baudry came within inches of grabbing an equaliser, as his far post header from a Louis Reed corner went narrowly wide.

Scott Lindsey’s side then suffered a huge blow two minutes later as Harrogate scored their second with Matty Daly hitting a powerful, curling shot high into the top right hand corner of the net, clipping the crossbar on it’s way in and leaving the diving Brynn with no chance.

Luke Armstrong threatened again for the hosts on 62-minutes, dragging a low shot wide after finding space in the area, before Joshua Austerfield was shown a yellow for another foul on McKirdy.

Jacob Wakeling entered the field shortly after as Lindsey made his first change, and the striker was involved immediately as he was brought down in the area for a penalty.

Ben Gladwin stepped up and hit a low right-footed shot heading for the keepers bottom left which beat the stopper, but agonisingly struck the post and bounced out, enabling Harrogate to clear their lines.

The hosts then made sure of the points 15-minutes from time, as substitute Jack Muldoon stole in to tap the ball home from close range.

Town substitute Saidou Khan looked a real threat when he came on, driving at the Harrogate defence looking to create an opening, and he almost claimed an assist for McKirdy with a fantastic cross field ball, but the striker was just unable to generate any power on his first time volley. 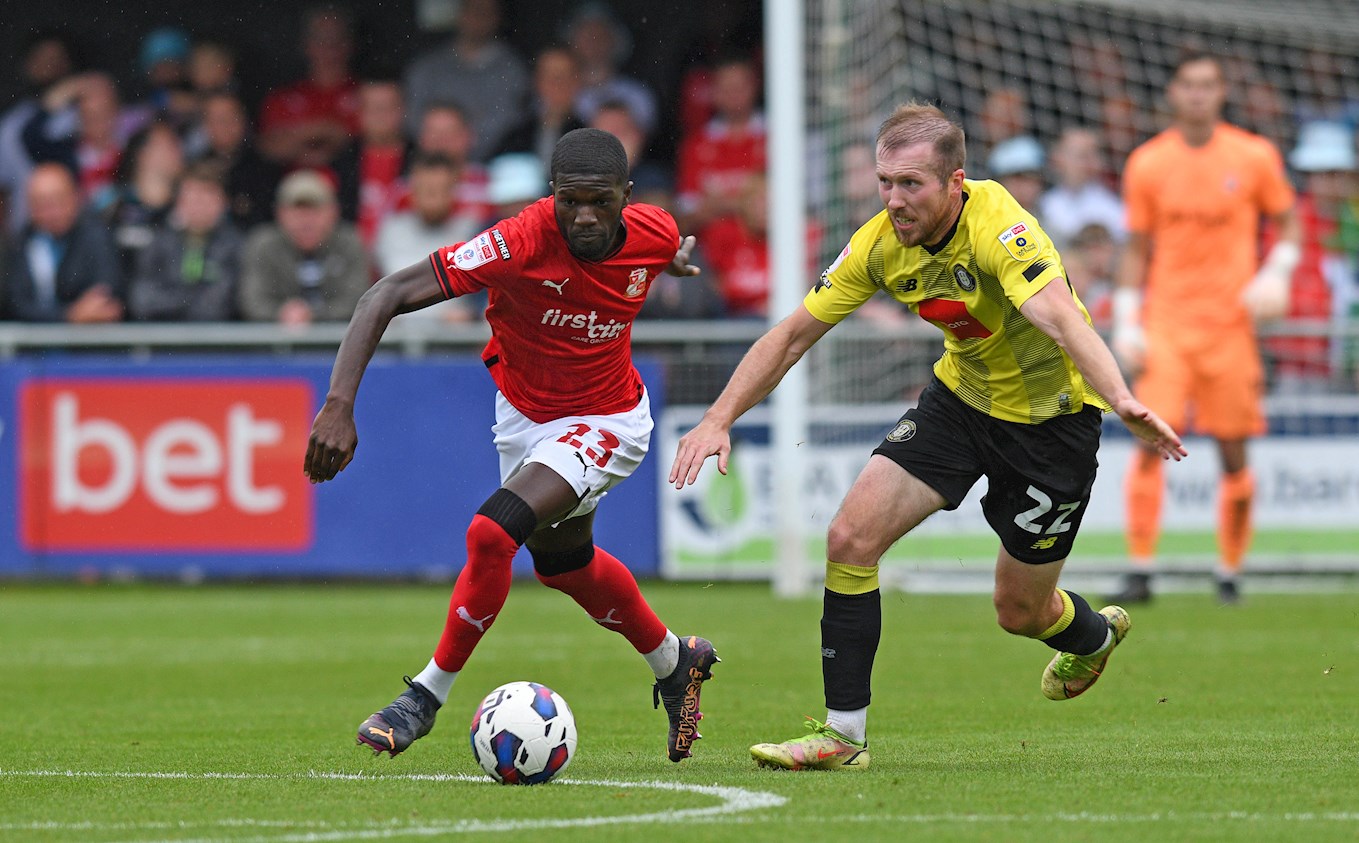 As the minutes ticked down, there were two further clear cut chances in added time.

Cian Harries had the first of them, sending a shot over after some good play from McKirdy and Baudry, before Sol Brynn was called into action shortly after, saving well from Luke Armstrong inside the area.

The game ended 3-0, and Town will now turn their attentions to their next league game against Salford City next weekend, as they take on the Manchester club at The County Ground.

A huge thank you to all the travelling supporters that came along. We really appreciate you coming to support the team.

We go again next Saturday – COYR!