Swindon Town will begin the 2022/23 season with an away clash at Harrogate Town on the opening weekend, as the EFL Sky Bet League Two fixtures are revealed.

Town will begin the Scott Lindsey era at The EnviroVent Stadium on Saturday 30 July, before a first home curtain-raiser the following weekend against Salford City on Saturday 6 August.

A long away journey to Carlisle United awaits on Saturday 13 August, followed by two consecutive home ties against Leyton Orient on Tuesday 16 August and Rochdale on Saturday 20 August respectively.

Stockport County are the first promoted side Town will face, with the game scheduled to take place at Edgeley Park on Saturday 27 August.

The following weekend will see Town face Gillingham on Saturday 3 September, who were relegated from League One last term.

There’ll be no rest for League Two in November and December as the Premier League and Sky Bet Championship pause for the World Cup in Qatar.

The busy Christmas period begins away at Barrow on Saturday 17 December, followed by a home encounter with Walsall on Boxing Day.

Lindsey’s side make the short trip to Northampton Town – who missed out on automatic promotion on a dramatic final day last season – on Saturday 29 December, closely followed by a trip to Colchester on New Year’s Day.

There’ll be just two double-headers at The County Ground in 2023, as Stevenage Borough and newly-promoted Grimsby Town visit SN1 in January.

The second will take place in April, with Barrow and Bradford City heading to Wiltshire on Saturday 15 and Tuesday 18 respectively.

Town’s final fixture of the campaign will see them face Crawley Town at home on Saturday 6 May. 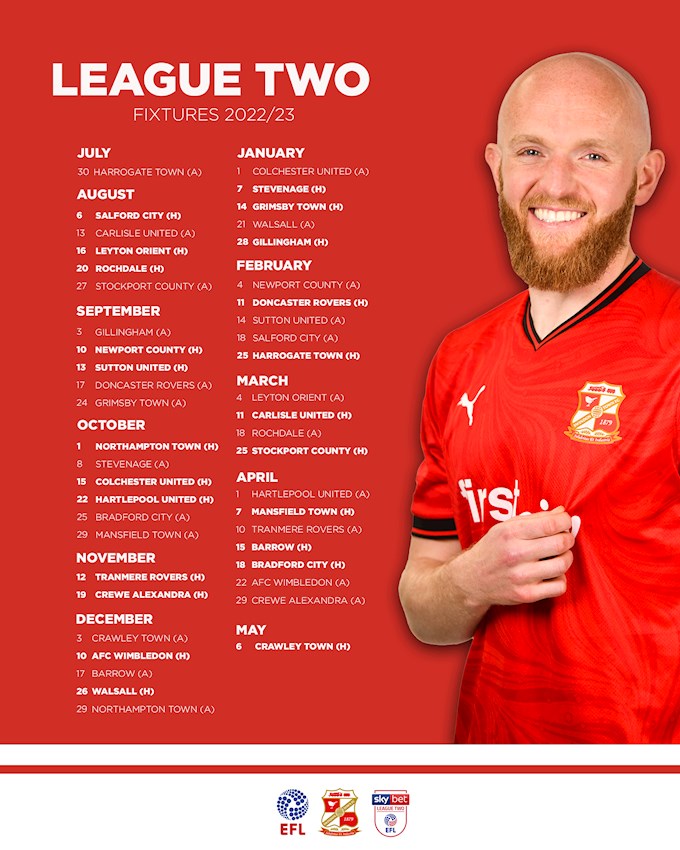 As well as the new league fixtures, our final EFL Cup Group E participant will also be revealed today at 11.30am, where we will find out who will be joining Bristol Rovers, Plymouth Argyle and ourselves in the Southern Section.

The First Round draw for the Carabao Cup will also be announced today at 2.30pm, with ties scheduled to take place on Tuesday 9 August.


In what is a group containing familiar and local opponents, the Reds will be hoping for cup success in the 2022/23 Papa John's Trophy competition.