Swindon Town scored a last-gasp winner to beat Bradford City 2-1 in dramatic fashion in the EFL Sky Bet League Two at the Valley Parade this afternoon.

Gareth Evans gave the home team a deserved lead before the Reds hit straight back through yet another goal from top scorer Harry McKirdy.

It was an action-packed first-half and it was the same in the second-half, with the game having an explosive ending as Jack Payne hammered home a stoppage time winner from the penalty spot.

Town Head Coach Ben Garner was forced into the one change with Jonny Williams replacing the injured Louie Barry, while there was a return to the matchday squad for Jack Payne, who took his place amongst the subs after recovering from injury.

There was a late change to the Starting XI for the visitors, with Akin Odimayo coming in to replace Joe Tomlinson after the warm-ups were completed.

Bradford started on the front foot and forced the Reds to weather an early storm as Callum Cooke forced Jojo Wollacott into a great save down low, before Caolan Lavery curled a shot inches over the bar.

It was all one-way traffic with Wollacott having to be alert to come out to claim a cross from Alex Gilliead, before the Keeper did well to cut out a dangerous ball intended for Andy Cook, who was in acres of space with an empty net to aim at. 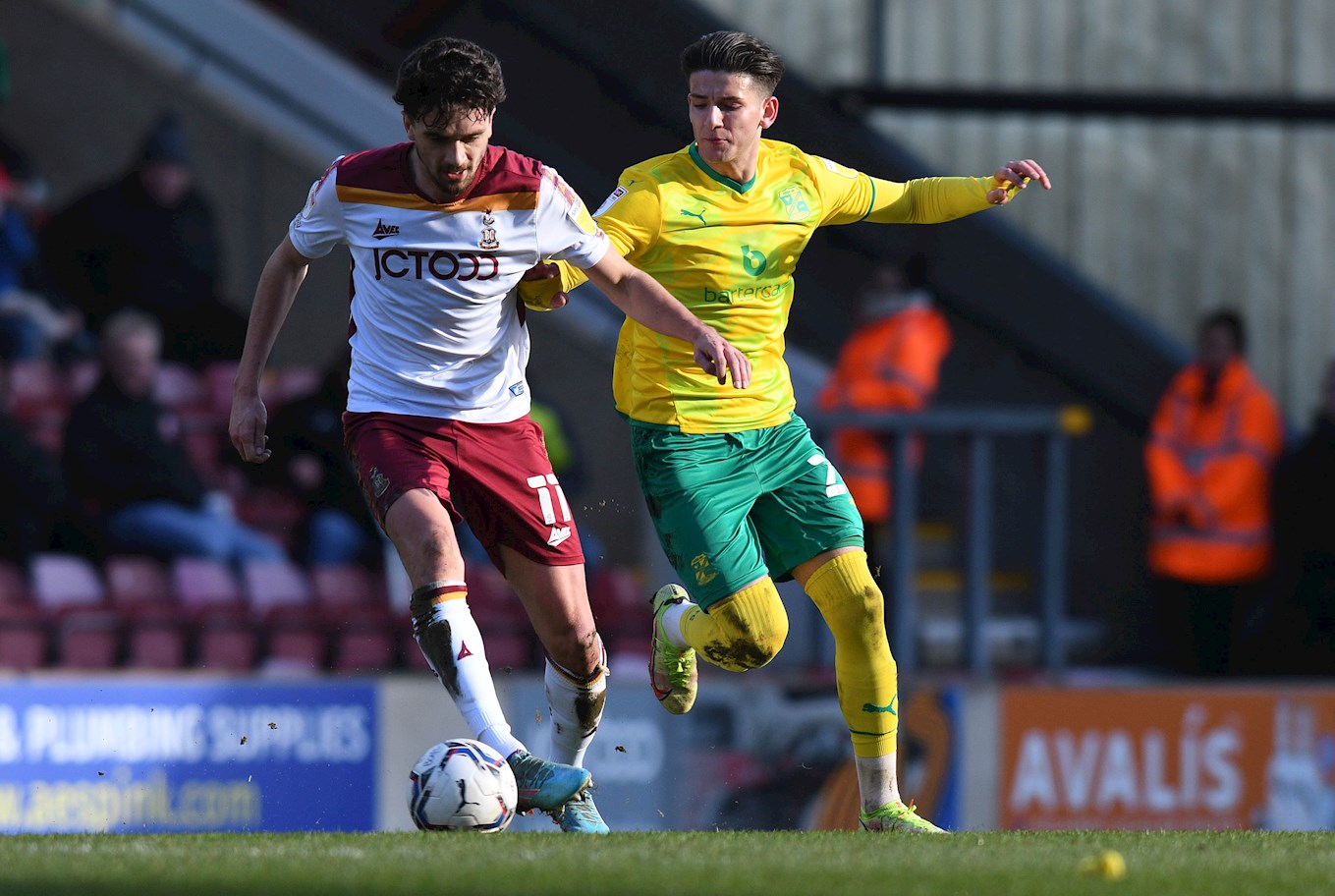 There was a golden opportunity for Town to take the lead against the run of play with Harry McKirdy doing brilliantly, beating his man before seeing his shot-cross cleared off the line by Yann Songo'o.

However, The Bantams' pressure eventually told as a cross into the box was controlled on the chest of Gareth Evans, who then proceeded to smash a volley past Wollacott for the opening goal of the game.

But, that lead was soon wiped out as Town hit right back with McKirdy glancing home a fine finish with the outside of his boot from a low cross from Jonny Williams.

Ricky Aguiar curled an effort wide after a corner was only half-cleared, before Wollacott came up with a huge save moments later as he denied Gilliead with his legs after the attacker was played clean through by a combination of Cook and Luke Hendrie.

Town should have taken the lead before the break with McKirdy beating his man before clipping a cross into the box, but Josh Davison could only plant his header wide of the post. 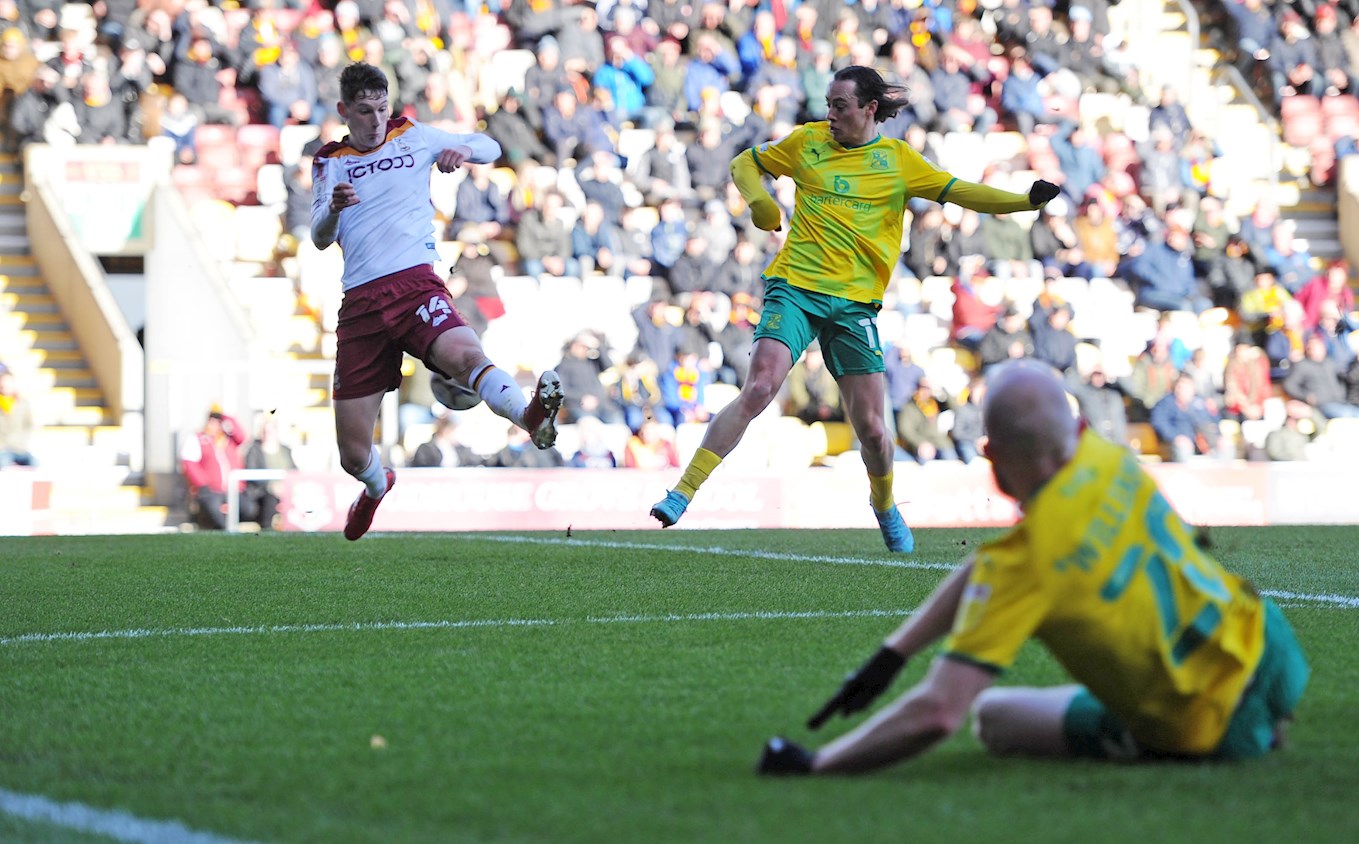 It was a lively start to the second-half as both sides pushed for the next goal of the game, with Aguiar slicing a shot off target before his next effort was cleared off the line.

Bradford then came close as Matthew Foulds saw his effort come back off the crossbar from a corner, before Songo'o also hit the woodwork.

The game was being played at a rapid and non-stop tempo with both teams going all-out for the win, but they were doing a good job of cancelling one another out.

Town made their first change of the game with 20 minutes remaining as Mathieu Baudry replaced Akin Odimayo, before there was a great chance for the visitors as Davison played McKirdy clean through, but the forward's shot was blocked by Alex Bass who got back to smother the loose ball.

Jack Payne then made a welcome and long-awaited return to action as he replaced Jonny Williams, before Aguiar fired a shot straight into the chest of Bass. 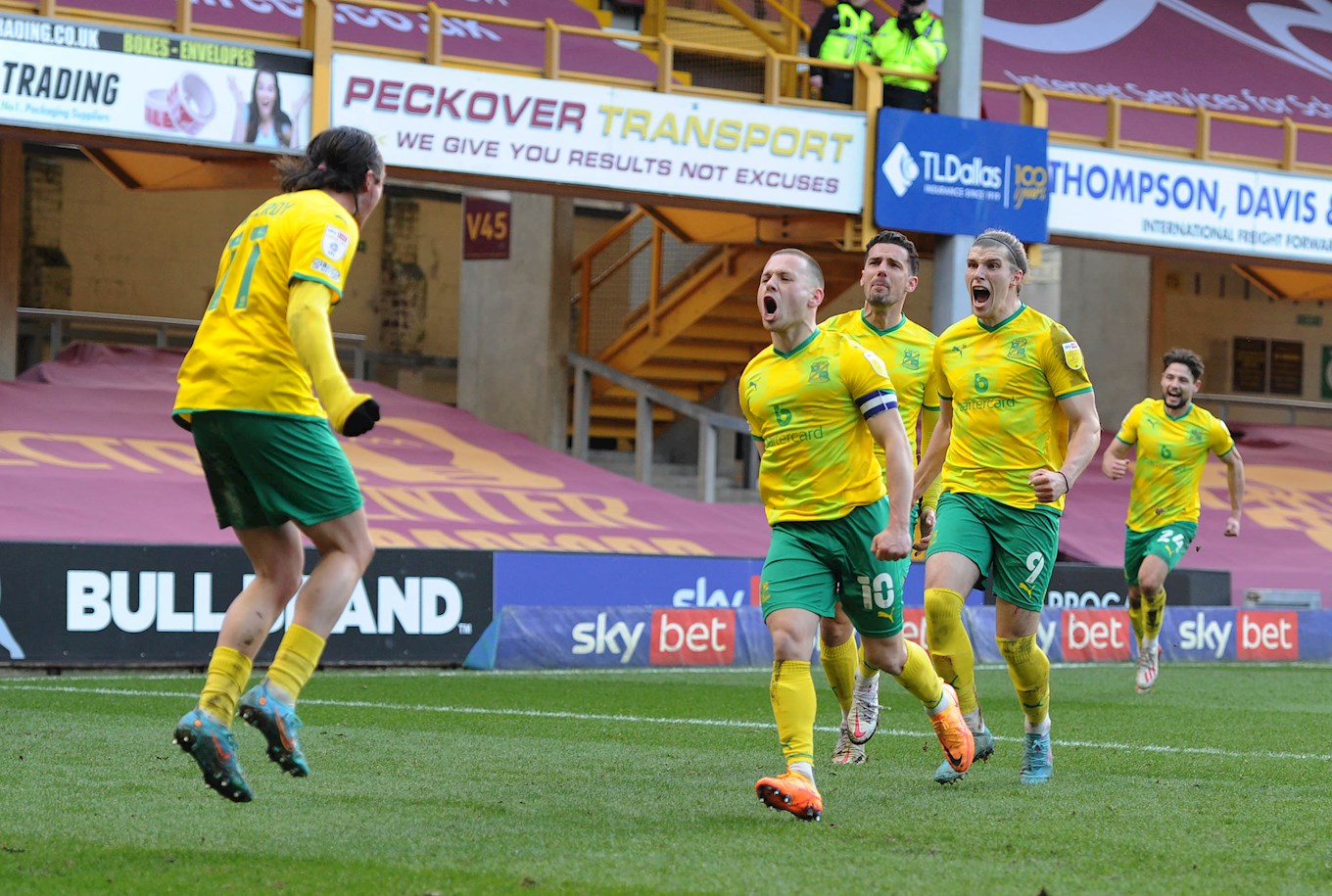 There was a golden opportunity for Town late on as McKirdy seized on a loose ball before letting fly, forcing Bass into a fine save as he tipped the ball over the bar.

However, there would be one last chance for Town and they took it as Bass brought down Ellis Iandolo, and Payne kept his cool to smash home the winning goal with what was literally the last kick of the game.