Swindon Town began life under newly-appointed First-Team Head Coach, Scott Lindsey, with a hard-fought 3-2 victory away at Melksham Town as their pre-season warm-up schedule got underway.

There was a rather unfamiliar look to Lindsey’s starting eleven as he opted to run the rule over seven trialists with only a handful of recognisable names taking to the field.

Two of them would find the net on a sodden Oakfield Stadium pitch to drive Town to victory, while Ricky Aguiar, handed the captains armband for the day, would hit the pick of the goals with an impressive long range effort.

The Southern League Division One South side gave as good as they got though, and having gone a goal behind, responded well to take a 2-1 lead thanks to goals from Luke Ballinger and Sol Pryce.

With Aguiar assigned an attacking midfield role for the afternoon, there were also starts for Harrison Minturn, recently acquired goalkeeper Sol Brynn and Mo Dabre.

On a wet surface which was certainly tested with countless heavy downpours, it was the hosts who started the brighter of the two as Swindon struggled to take the early initiative.

Melksham carved out the first few clear opportunities of the game, with Sol Pryce heading narrowly wide from a Hopkins cross after just three minutes, and Ralph Graham hitting a tame volley at Sol Brynn from close range.

But it was Swindon who broke the deadlock as the 15-minute mark approached following good work from Dabre on the edge of the Melksham box. His pass found one of our trialists who took a composed touch and struck the ball powerfully past Thompson, high into the net.

However, the hosts responded well to the setback and equalised just three minutes later, as Hopkins whipped in another dangerous cross, which this time found the head of an unmarked Ballinger, and he was able to adjust his body and guide a downward header past Brynn. 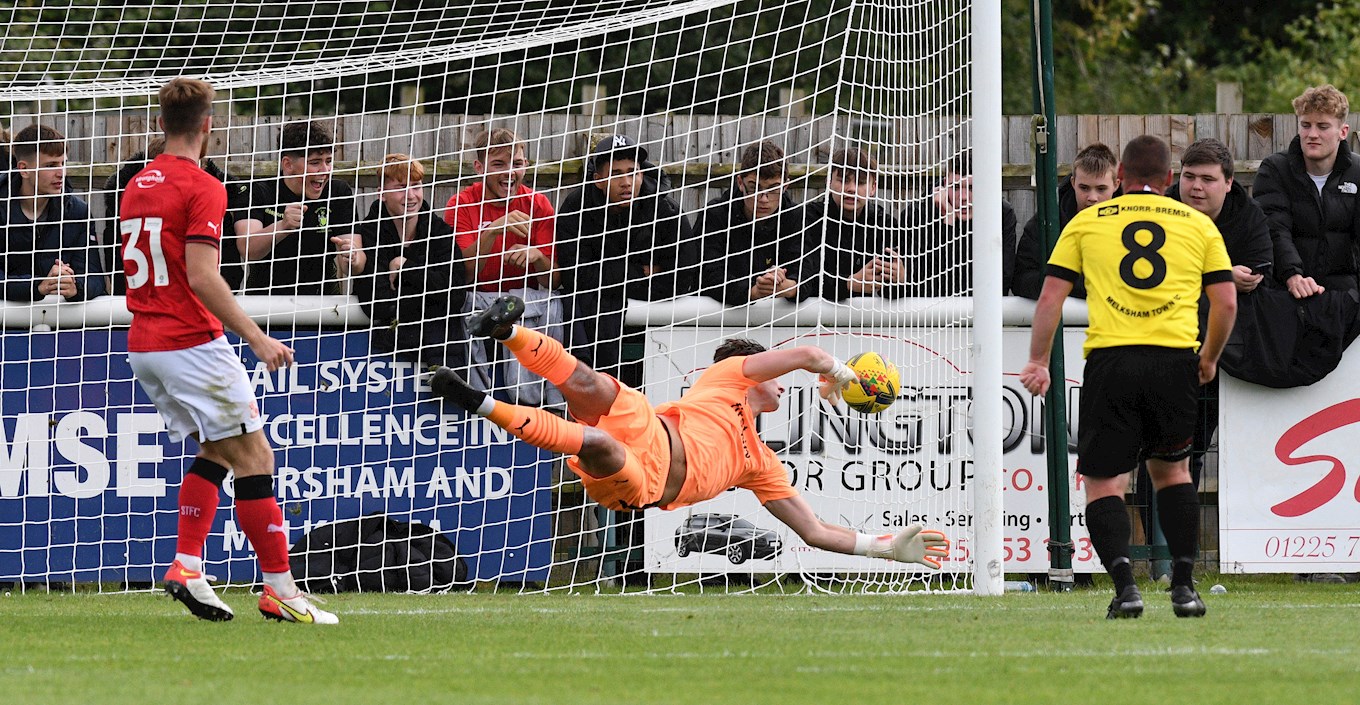 With their tails up, the home side took the lead just six minutes later, with Ballinger turning provider this time, sending Pryce clear through on goal and the striker confidently lifted the ball over the on-rushing Brynn to make it 2-1.

Swindon upped their game after the setback and created a hat-trick of opportunities through trialists, but they were made to wait a little longer for that illusive equaliser.

With half-time fast approaching, Ricky Aguiar found himself with the ball at his feet and struck a delightful low right-footed drive that left Thompson in the home goal stranded.

As the half-time interval came, Town boss Lindsey tweaked his side slightly, bringing off Aguiar and Dabre, replacing them with Cowmeadow and the youthful Dworzak.

Harry Parsons was also sent on early in the second period to enhance Town’s attacking options.

The hosts struggled to create any clear-cut chances in the second half and looked leggy having played Bristol Rovers the previous evening.

George Cowmeadow was heavily involved in most of Town’s attacks as he probed down the left on numerous occasions, but the all important winner was proving hard to come by.

Melksham’s substitute goalkeeper was forced into a couple of close-range stops from Parsons and Dworzak, but Lindsey’s side were finally rewarded for their persistence on 76-minutes. 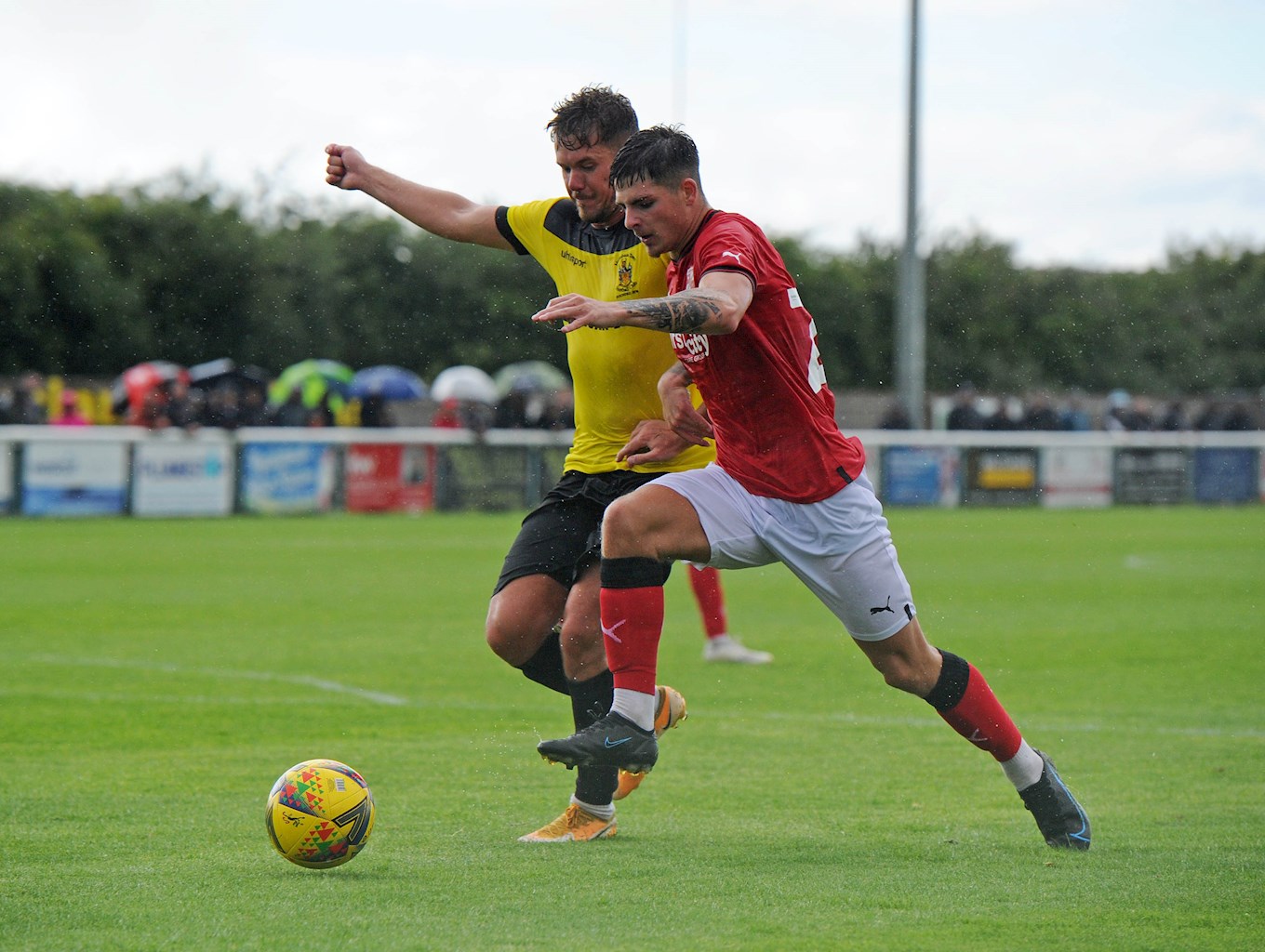 A slick passing move involving Parsons and Cowmeadow resulted in the latter fizzing a low ball across the box for an on-rushing trialist to slide home.

New loan signing Ciaran Brennan was brought on for his first taste of action in a Swindon shirt with ten minutes to go as torrential rain soaked the players and the brave fans on the sidelines, however chances were at a premium as Town held firm to claim the win in front of a bumper 1,592 crowd.

Town’s next pre-season match will see them head to The Webbswood Stadium to face Swindon Supermarine on Saturday 9 July, kick off at 3pm.